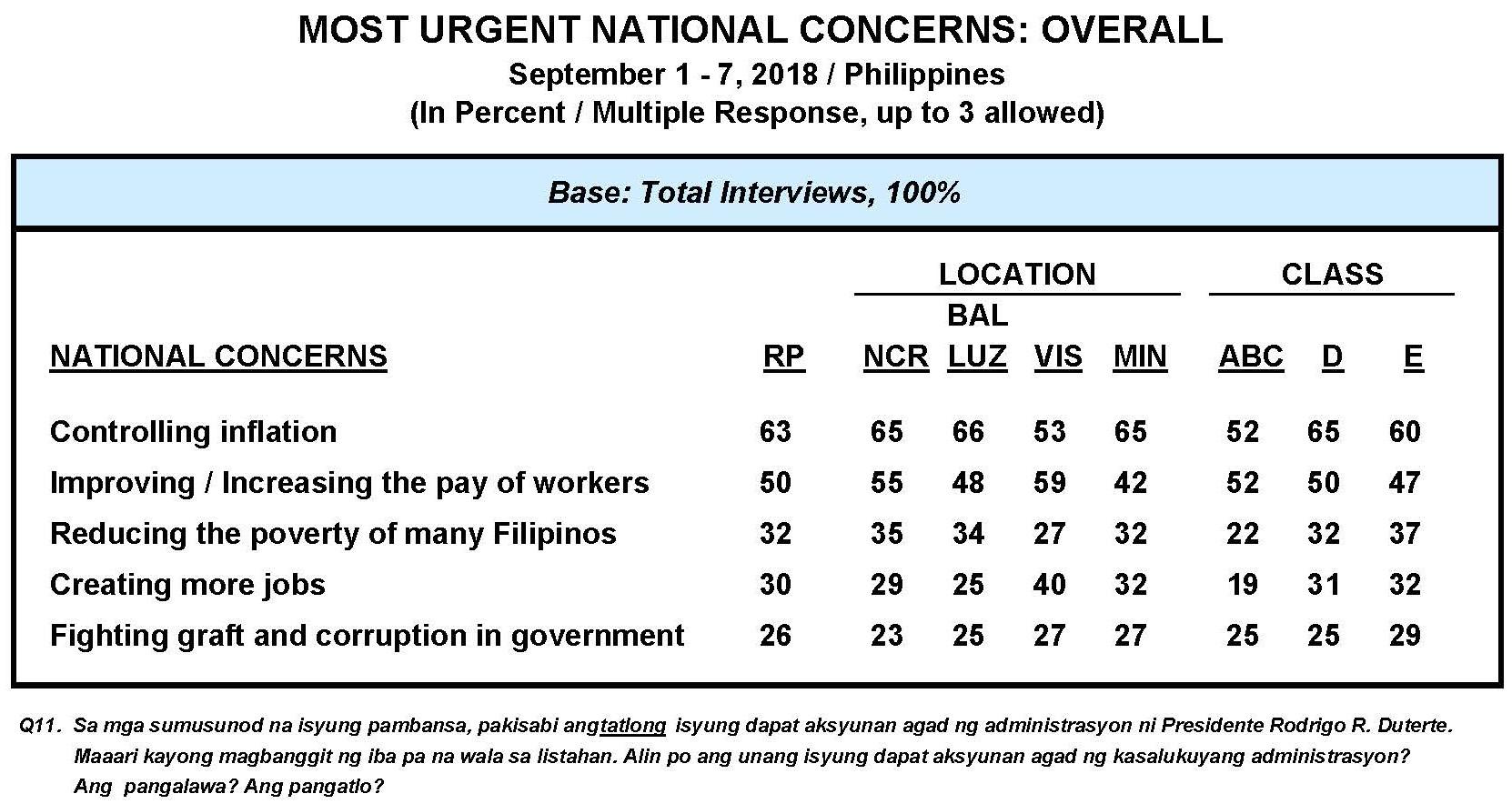 Pulse Asia Research, Inc. is pleased to share with you some findings on Urgent National Concerns and the Performance Ratings of the National Administration on Selected Issues from the September 2018 Ulat ng Bayan national survey. We request you to assist us in informing the public by disseminating this information.

As in our previous Ulat ng Bayan surveys, this nationwide survey is based on a sample of 1,800 representative adults 18 years old and above. It has a ± 2.3% error margin at the 95% confidence level.  Subnational estimates for the geographic areas covered in the survey have the following error margins at 95% confidence level:  ± 6.5% for Metro Manila, ± 3.5% for the rest of Luzon, ± 5.2% for Visayas and ± 4.7% for Mindanao. Those interested in further technical details may refer to our website (www.pulseasia.ph)

Filipinos continue to be most concerned about economic matters; public sentiment as regards urgent national concerns is essentially unchanged between June and September 2018

Amidst the soaring prices of basic goods, a sizeable majority of Filipinos (63%) say inflation is an issue that the Duterte administration must immediately address. This is the predominant opinion in all geographic areas and socio-economic classes (53% to 66% and 52% to 65%, respectively). Meanwhile, half of Filipinos (50%) consider the need to increase the pay of workers as an urgent national concern – a sentiment expressed by majorities in Metro Manila (55%), the Visayas (59%), and Class ABC (52%). (Please refer to Table 1.) 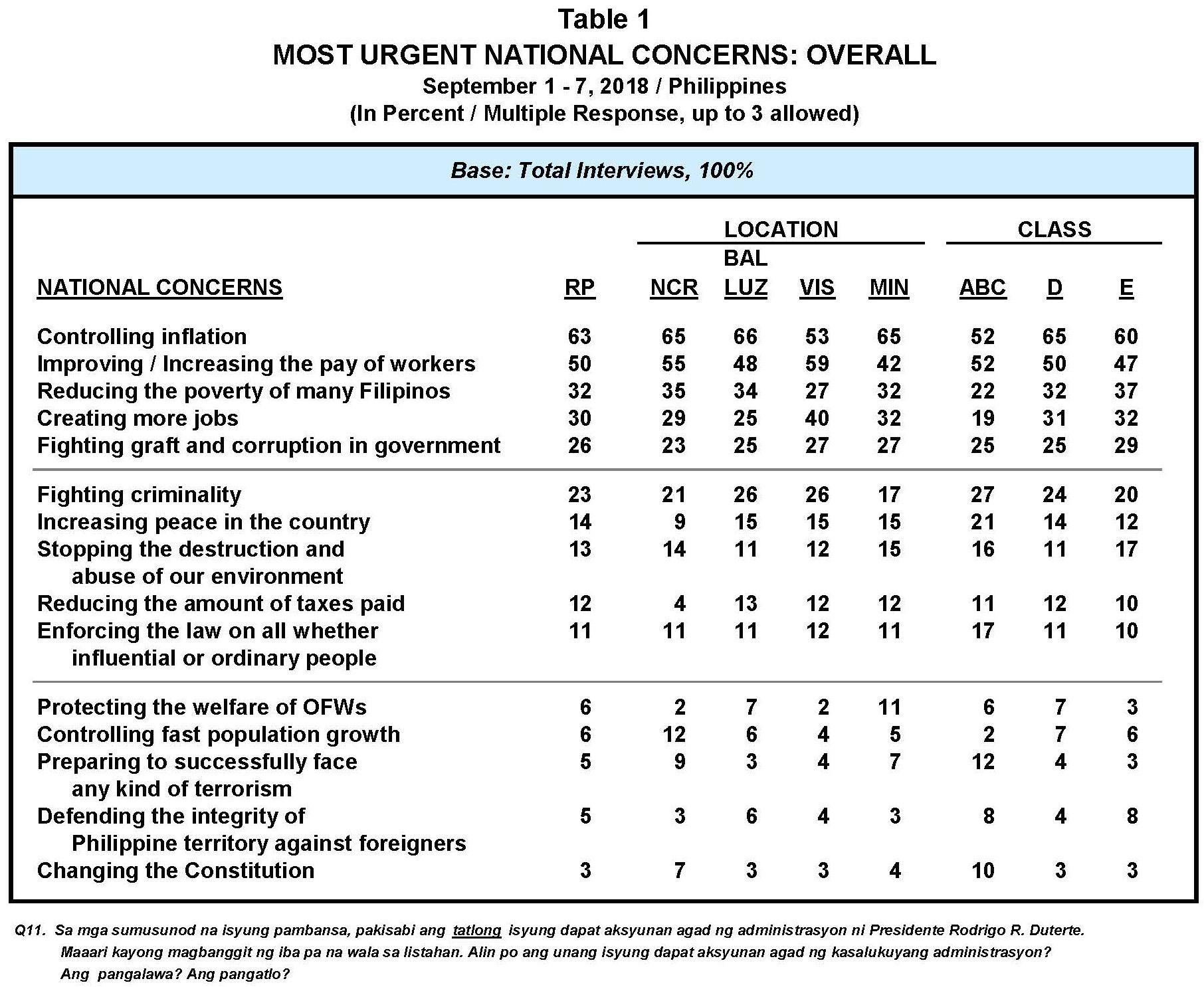 A third set of urgent national concerns includes poverty reduction (32%) and job creation (30%). Fighting graft and corruption in government (26%) and combatting criminality (23%) comprise a fourth set of issues deemed urgent by Filipinos while a fifth group of urgent national concerns includes promoting peace (14%), protecting the environment (13%), reducing the amount of taxes paid by citizens (12%), and enforcing the rule of law (11%). In September 2018, Filipinos are least concerned about the welfare of overseas Filipino workers (6%), rapid population growth (6%), terrorism (5%), national territorial integrity (5%), and charter change (3%). None of these issues are considered urgent by a majority across geographic areas and socio-economic groupings.

Inflation is the leading first and second mentioned urgent national concern of Filipinos in September 2018 (31% and 23%, respectively). On the other hand, the top third mentioned urgent national concerns are increasing the pay of workers (13%), reducing poverty (12%), creating more jobs (12%), fighting corruption (12%), and controlling inflation (9%). (Please refer to Table 2.) 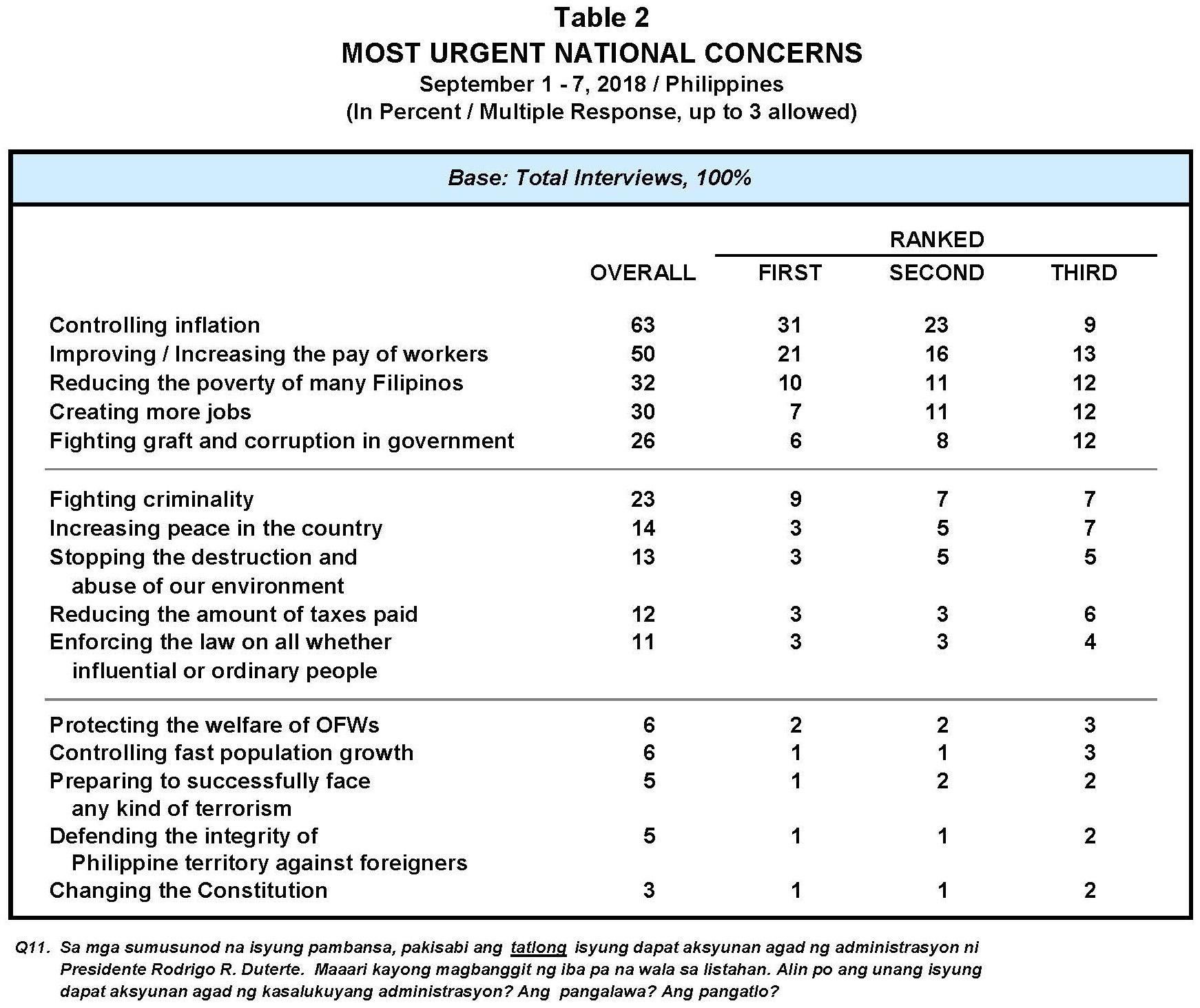 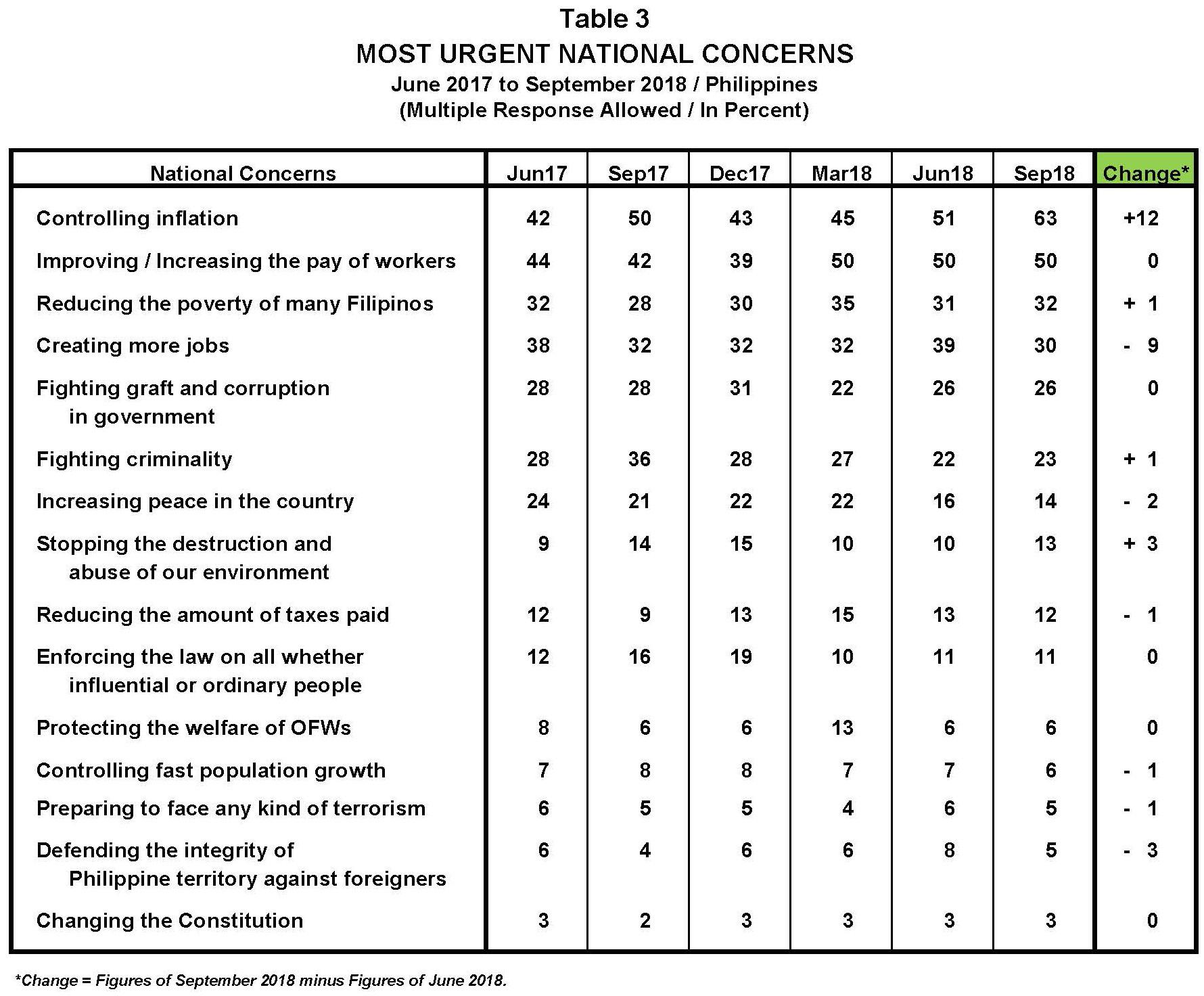 Although the Duterte administration enjoys majority approval ratings on 10 out of the 12 issues on which its performance is evaluated in this survey, its approval ratings decline across all 12 issues during the period June to September 2018

Filipinos grant the national administration majority approval scores for its efforts to fight criminality (83%), protect the welfare of overseas Filipino workers (75%), respond to the needs of areas affected by calamities (74%), fight corruption (71%), enforce the rule of law (69%), promote peace (69%), protect the environment (65%), defend national territorial integrity (56%), create more jobs (56%), and increase the pay of workers (53%). Appreciation is the plurality sentiment toward the Duterte administration’s anti-poverty initiatives (39%). As far as the national issue deemed most urgent by Filipinos is concerned (i.e., inflation), disapproval is the predominant opinion with 51% of Filipinos having a negative assessment of the present administration’s handling of this issue. Levels of indecision about the national administration’s performance range from 14% on the issue of criminality to 34% on the issue of poverty. Additionally, Filipinos are least appreciative of the Duterte administration’s handling of the problem of soaring prices of basic commodities (27%) and are least critical of its work in the areas of fighting criminality, protecting the welfare of overseas Filipino workers (OFWs), and responding to the needs of calamity-hit areas (all at 3%). (Please refer to Table 4.) 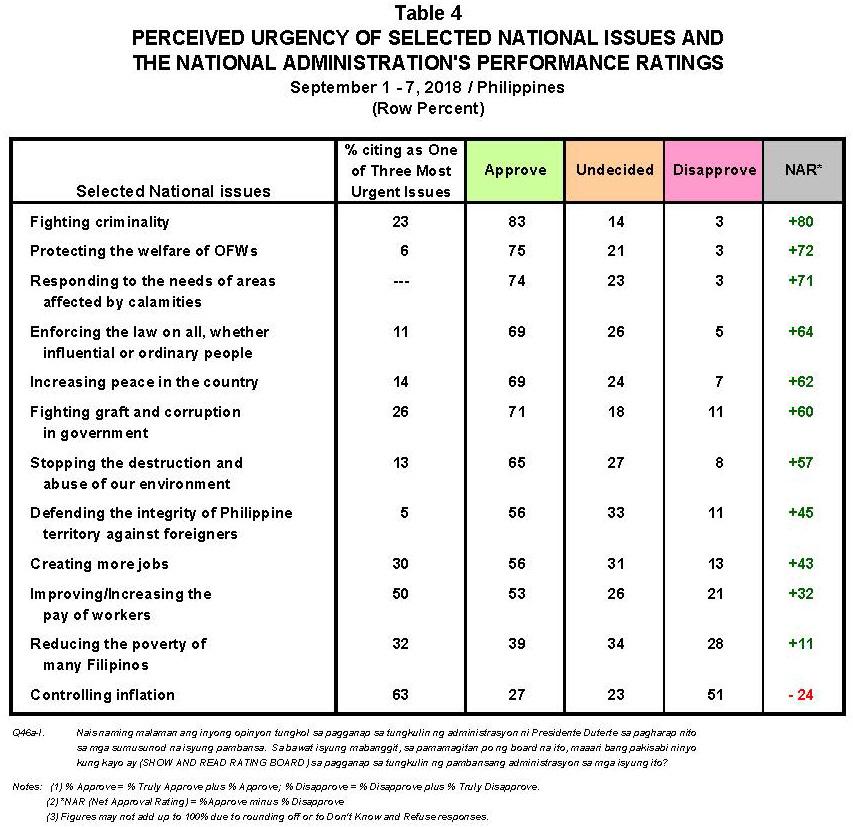 Public appreciation for the performance of the Duterte administration eases across all 12 issues on which it is performance-rated in the present survey. The most marked decline is recorded on the issue of poverty reduction (-16 percentage points) while the least pronounced one occurs on the issue of criminality and peace (both at -5 percentage points). With regard to the top urgent national concerns of Filipinos (i.e., inflation and workers’ pay), the incumbent administration’s approval scores decrease by 14 percentage points. (Please refer to Table 5.) 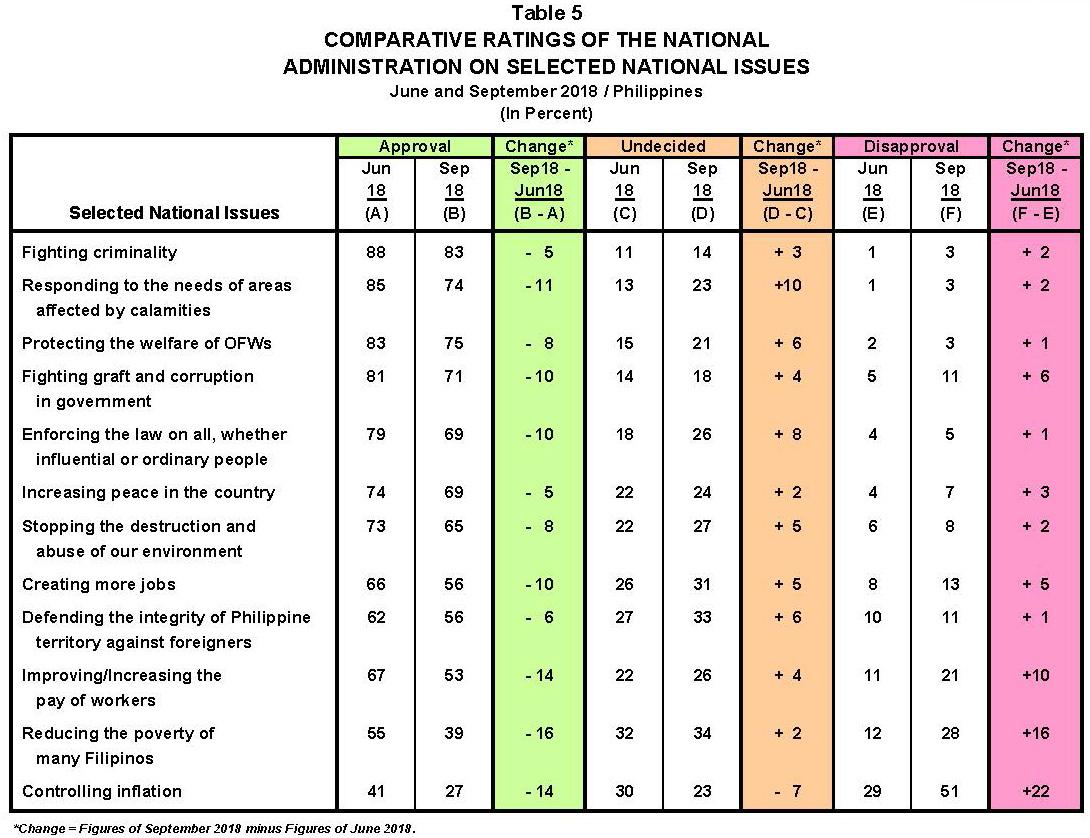