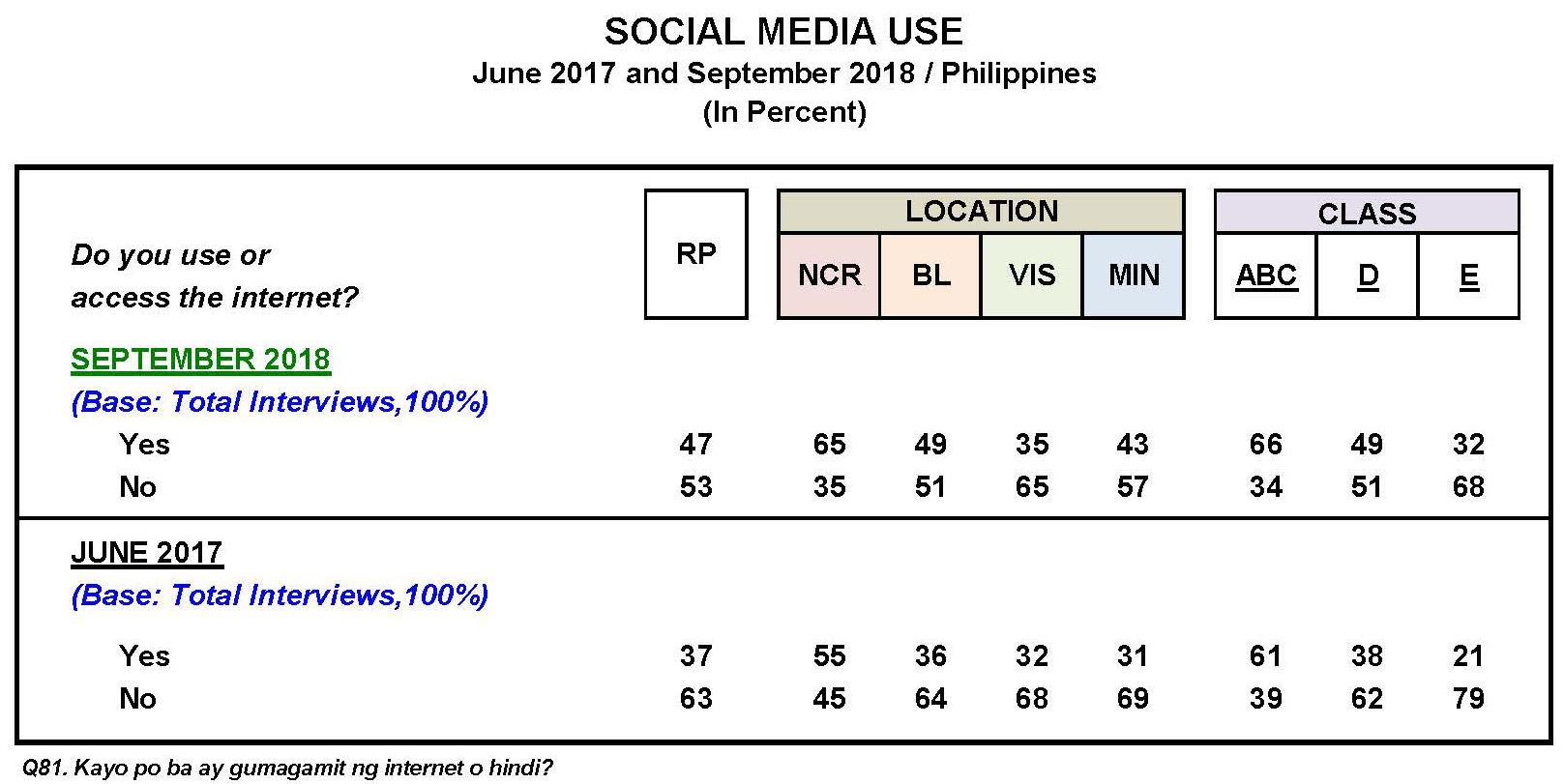 Pulse Asia Research, Inc. is pleased to share with you some findings on Social Media Use from the September 2018 Ulat ng Bayan national survey. We request you to assist us in informing the public by disseminating this information.

As in our previous Ulat ng Bayan surveys, this nationwide survey is based on a sample of 1,800 representative adults 18 years old and above. It has a ± 2.3% error margin at the 95% confidence level. Subnational estimates for the geographic areas covered in the survey have the following error margins at 95% confidence level: ± 6.5% for Metro Manila, ± 3.5% for the rest of Luzon, ± 5.2% for Visayas and ± 4.7% for Mindanao. Those interested in further technical details may refer to our website (www.pulseasia.ph)

Nearly half of Filipinos (47%) use the internet, with nearly all of them using their mobile phones to access the internet (94%) and accessing the internet for purposes of checking their social media accounts (98%)

While 47% of Filipino report using or accessing the internet, the rest (53%) do not. Use of the internet is reported by majorities only in Metro Manila (65%) and the best-off Class ABC (66%). On the other hand, only about a third of those in the Visayas and the poorest Class E use the internet (35% and 32%, respectively). Back in June 2017, a smaller percentage of Filipinos (37%) reported accessing the internet and, again, the only majority usage is recorded in Metro Manila and Class ABC (55% and 61%, respectively). (Please refer to Table 1.)

Among those who access the internet, practically each one of them (94%) uses mobile phones to do so. Similar figures are recorded across geographic areas and socio-economic classes (91% to 95% and 84% to 97%, respectively). On the other hand, 13% access the internet via computers at internet cafes, 11% do so on their home computers or laptops, 8% make use of tablets, and 2% connect to the internet using their office computer or laptop. In June 2017, a slightly smaller percentage of internet users accessed the web through mobile phones (89%) while bigger percentages reported using internet cafes (23%) and home computers or laptops (20%).

Practically all Filipinos who access the internet do so to check on their social media accounts (98%). The same is reported by virtually every Filipino across geographic areas and socio-economic groupings (95% to 100% and 95% to 99%, respectively). Meanwhile, 39% of those who use the internet surf the web to read, watch, and/or listen to other things of interest to them. Reading, watching, and/or listening to the news is an activity reported by 29% of Filipinos who use the internet while 20% do so to send, receive, and/or read emails. Presently, smaller percentages of those who access the internet do so to either update themselves with current events or to send, receive, and/or read emails (29% and 20%, respectively) compared to June 2017 (35% and 26%, respectively). 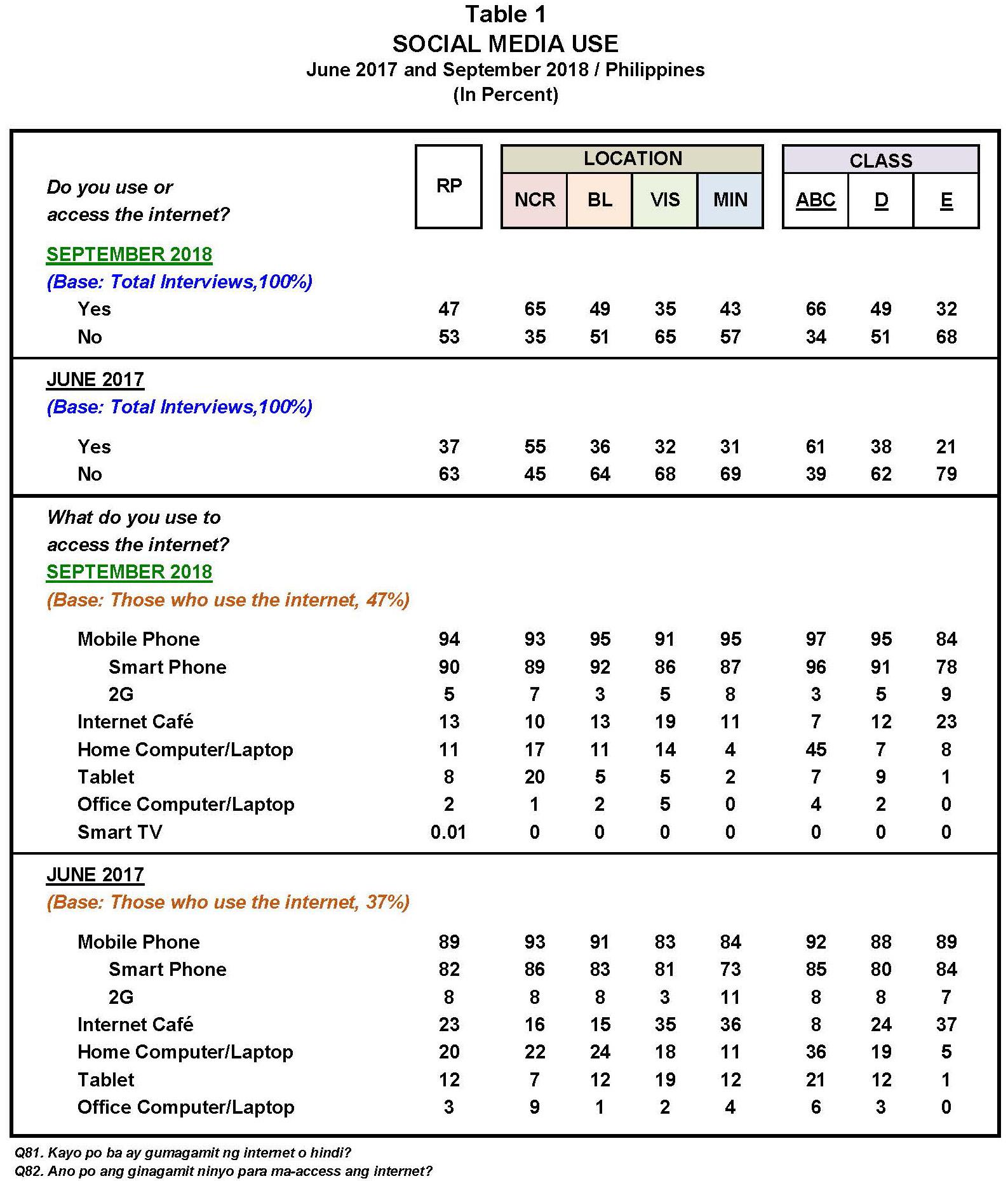 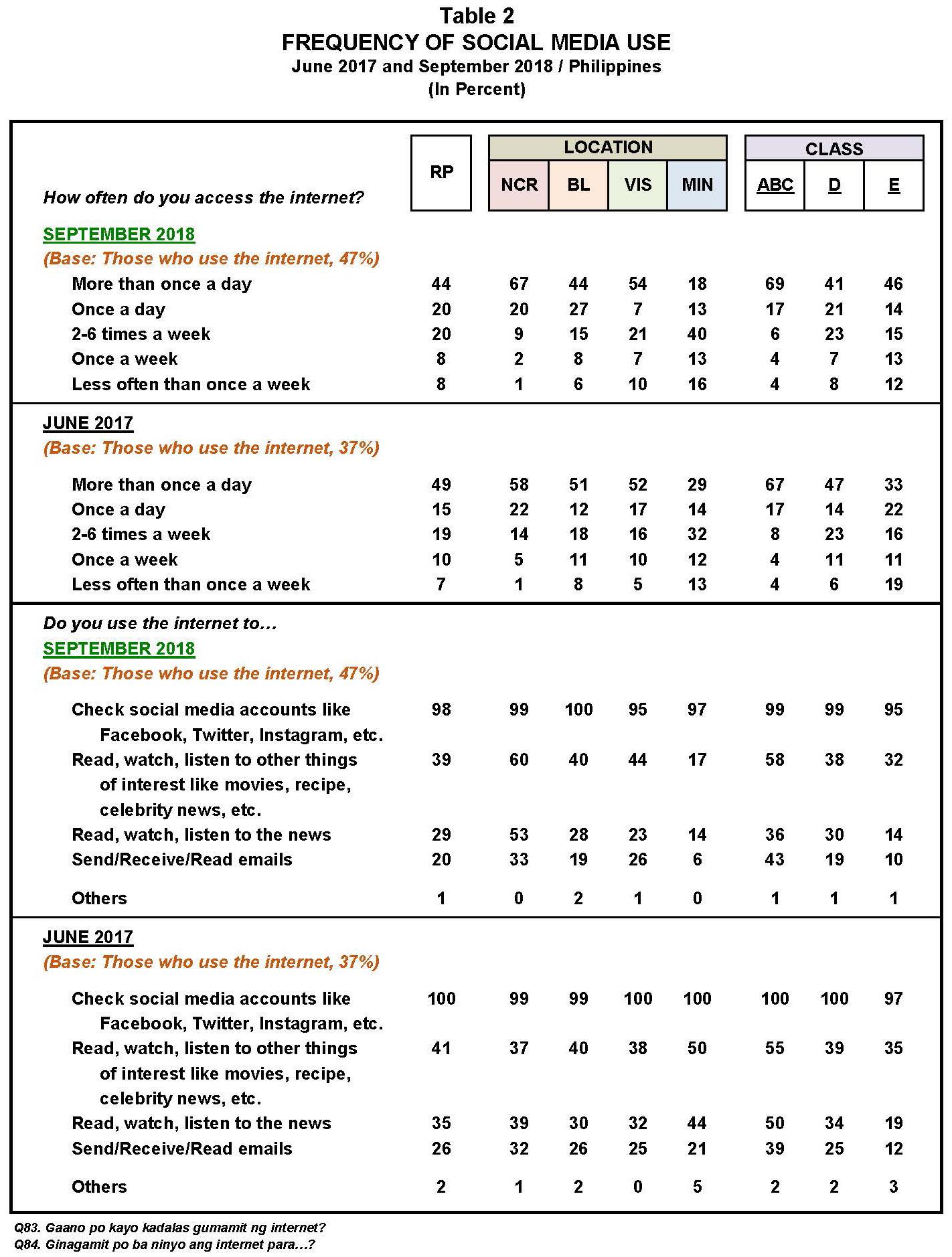 Essentially every Filipino who uses the internet to check their social media accounts has a Facebook account (100%). The same is reported by virtually all Filipinos in each geographic area and socio-economic class (100% and 98% to 100%, respectively). The other social media accounts owned by those who access the web for such are Instagram (17%), Twitter (11%), LinkedIn (3%), and Pinterest (2%). Nearly the same figures are recorded in June 2017. (Please refer to Table 3.) 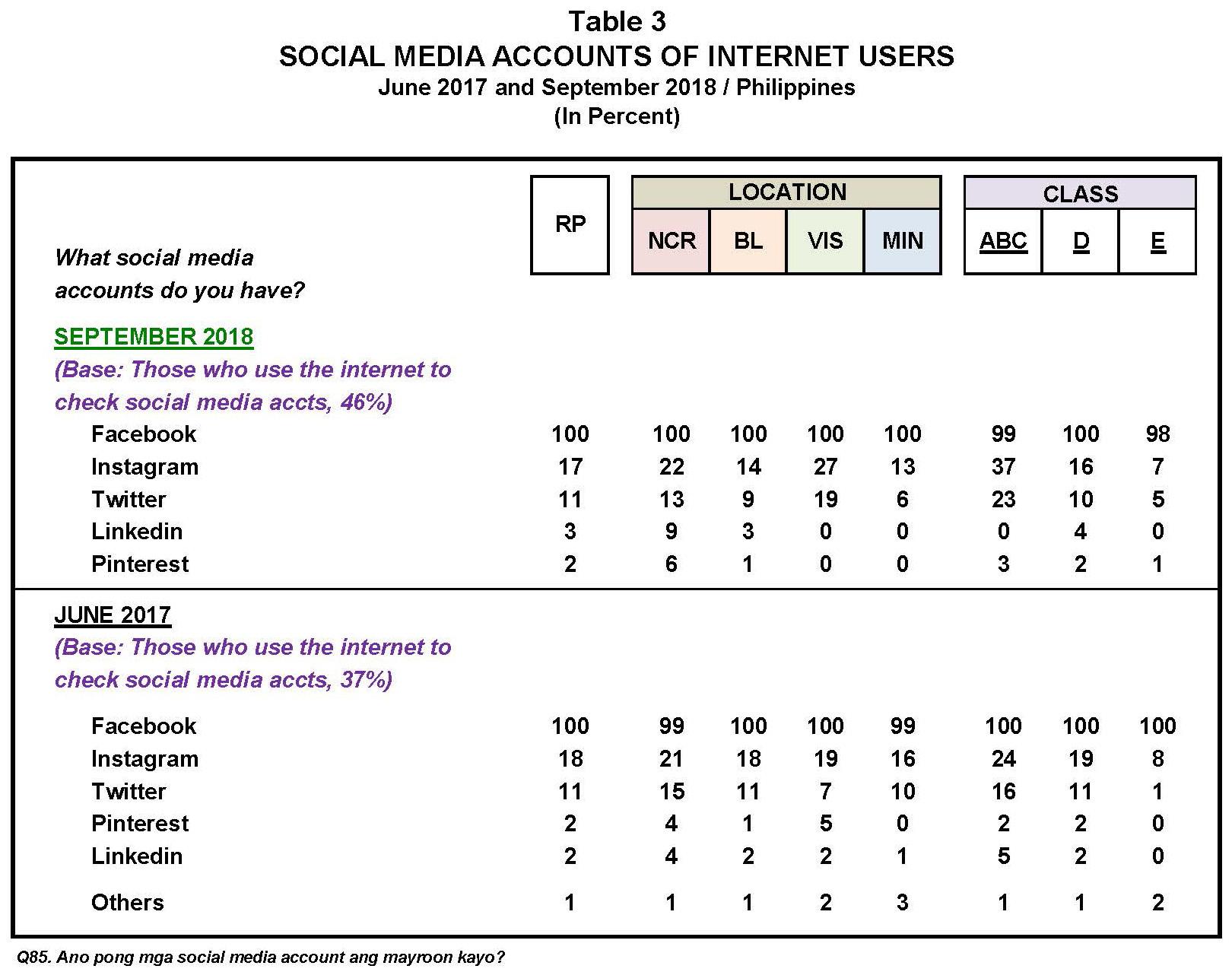 According to a bare majority of Filipinos who use the internet to access their social media accounts (51%), they have changed their views concerning politics and government at least once because of something they had seen, read, and/or listened to over the internet. The same is admitted by majorities in the rest of Luzon (52%), the Visayas (71%), Class ABC (57%), and Class E (60%). On the other hand, 49% of those accessing the web to check their social media account report otherwise. In June 2017, most Filipinos using the internet to access their social media accounts say they have never changed their political views as a result of something they encountered on the web. This was the prevailing sentiment in practically all geographic areas and socio-economic classes at that time (63% to 66% and 61% to 65%, respectively), with Mindanao being the exception (46%). (Please refer to Table 4.) 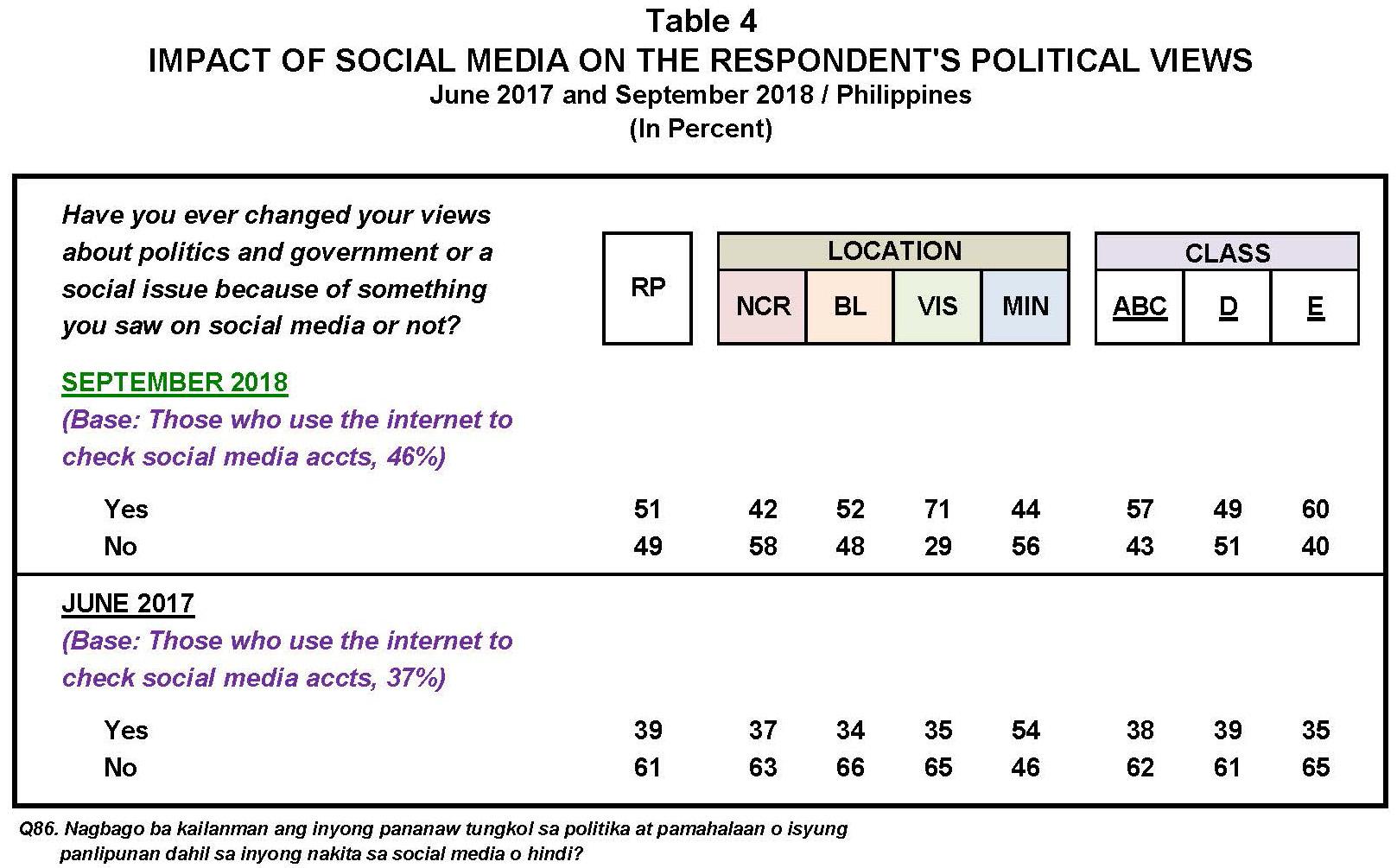 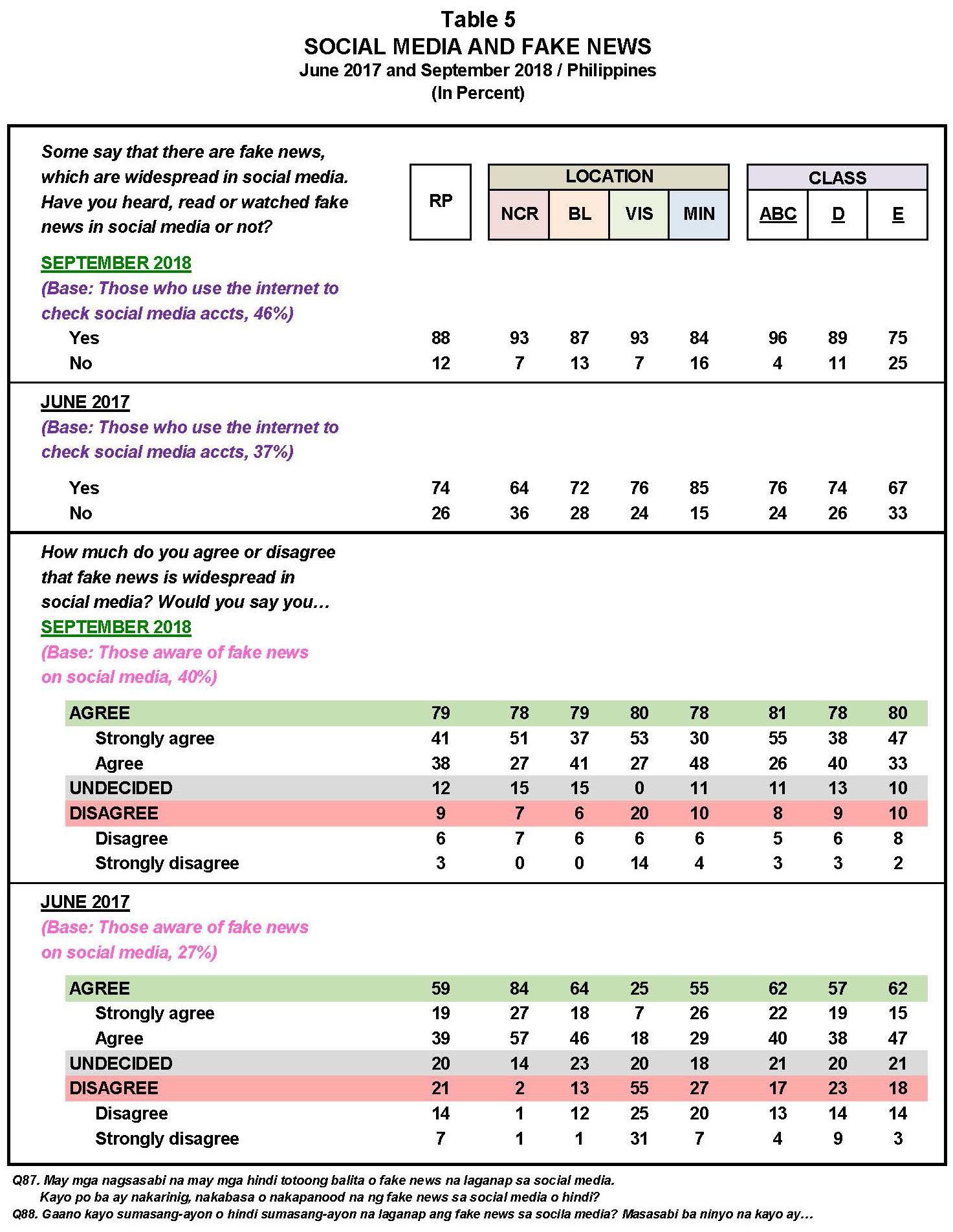