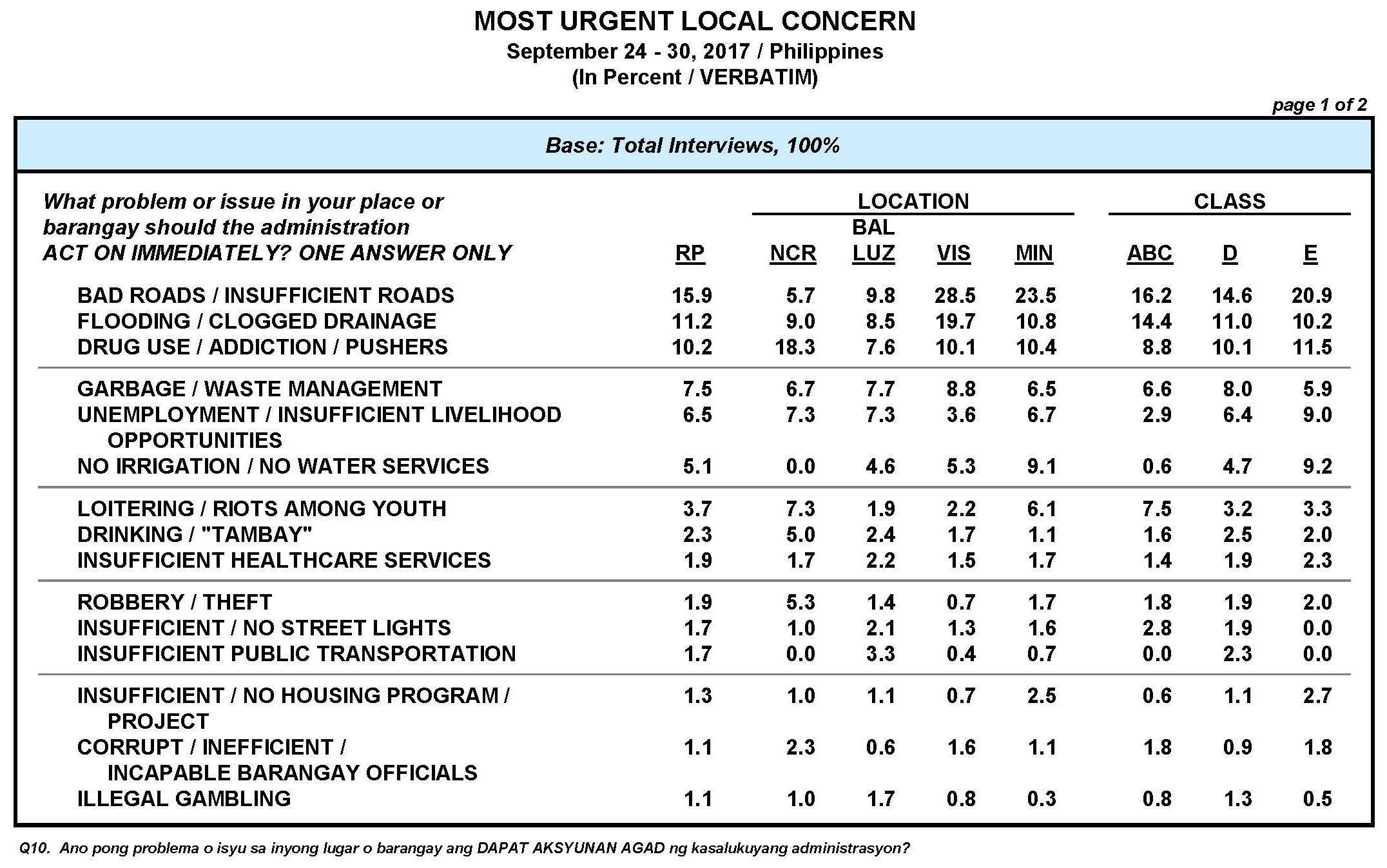 Pulse Asia Research, Inc. is pleased to share with you some findings on Urgent Local and National Concerns and Performance Ratings of the Duterte Administration on Selected Issues from the September 2017 Ulat ng Bayan national survey. We request you to assist us in informing the public by disseminating this information.

The survey fieldwork was conducted from September 24 – 30, 2017 using face-to-face interviews.

1.    The Senate Blue Ribbon Committee’s investigation into the shipment of illegal drugs worth P 6.4 billion that slipped through the Bureau of Customs (BOC) last May 2017 and the appearance of Davao City Vice-Mayor Paolo Duterte and Atty. Manases Carpio before the committee on 07 September 2017 during which they denied any links to the reported drug smuggling and corruption occurring in the BOC;

2.    The refusal of former BOC Commissioner Nicanor Faeldon to attend several hearings of the Senate Blue Ribbon Committee and his decision to turn himself in to the Office of the Senate Sergeant-at-Arms after Senator Richard Gordon cited him for contempt for being absent in previous hearings;

3.    The filing of an ethics complaint against Senator Antonio Trillanes IV by Senator Gordon arising from the former’s unparliamentary acts and language as well as disorderly behavior during the 31 August 2017 on the said drug shipment;

5.    The statement made by President Rodrigo R. Duterte and Philippine National Police (PNP) Chief Ronald dela Rosa denying any state policy to kill drug suspects in the conduct of the administration’s “war on drugs”;

6.    The trip to Singapore by Senator Trillanes to dispute allegations made by President Duterte that he owns several accounts in foreign banks and the lawmaker’s challenge to the President for the latter to sign bank waivers to allow authorities to scrutinize his bank accounts to prove that he has no ill-gotten wealth;

7.    The threat made by President Duterte to create an independent commission to investigate corruption within the Office of the Ombudsman after the latter launched a fact-finding investigation into the alleged ill-gotten wealth of the President and his family;

8.    The commemoration of the 45th anniversary of the declaration of Martial Law on 21 September 2017, with various groups staging protest actions nationwide, as well as the observance of the 100th birthday of former President Ferdinand E. Marcos, with his supporters holding a celebration in the Libingan ng mga Bayani (LNMB);

9.    The death of the so-called “most wanted drug lord” in Iloilo on 02 September 2017 during a shootout which ensued while the police was in the process of serving him a warrant of arrest and the cancellation of Chief Inspector Jovie Espenido’s transfer to Iloilo City from Ozamiz City;

10.    The call made by the Catholic Bishops’ Conference of the Philippines (CBCP) for the Catholic faithful to light candles and offer prayers for 40 days for the victims of the administration’s “war on drugs”;

11.    The suspected hazing death of a University of Santo Tomas (UST) law student in the hands of members of the Aegis Juris Fraternity and the joint hearing into the matter conducted by three (3) Senate Committees;

12.    The approval by the House of Representatives on third and final reading of the P 3.8 billion annual budget, with the budget of the Commission on Human Rights (CHR) being slashed by P 115 million;

13.    The confirmation by the military that Abdullah Maute, one of the leaders of the Maute group responsible for the continuing crisis in Marawi City, was killed during military operations in the area between 14 and 26 August 2017;

14.    The arrest of Puerto Princesa City Vice-Mayor Luis Marcaida on 04 September 2017 for possession of illegal drugs found in his residence during a raid conducted by the police and agents of the Philippine Drug Enforcement Agency (PDEA);

16.    The rejection by the Commission on Appointments (CA) of the appointment of Department of Agrarian Reform (DAR) Secretary Rafael Mariano, the resignation of Department of Information and Communications Technology (DICT) Secretary Rodolfo Salalima, and the removal of Sugar Regulatory Administration (SRA) Chief Anna Rosario Paner;

17.    The denial by the Office of the Ombudsman of the motion for reconsideration filed by former President Benigno S. Aquino III in connection with Ombudsman Conchita Carpio Morales’s 13 June 2017 order to charge him for usurpation of authority and violation of the Anti-Graft and Corruption Practices Act arising from his decision to allow former PNP Chief Alan Purisima, who was then under suspension, to lead Oplan Exodus in Mamasapano, Maguindanao in January 2015;

18.    The Sandiganbayan’s decisions to allow former Senator Jinggoy Estrada to post bail for plunder and 11 violations of the Anti-Graft and Corrupt Practices Act and to deny the motion for reconsideration filed by former Makati City Mayor Jejomar Erwin Binay, Jr. in connection with the anomalous Makati City Hall parking building project;

19.    In international news, the testing of a hydrogen bomb by North Korea on 03 September 2017 and its firing of an intermediate-range ballistic missile on 15 September 2017; another terrorist attack in London which injured at least 30 individuals which was supposedly carried out by a “detachment” of the Islamic State (IS); the unresolved crisis in Myanmar which has seen the continued exodus of thousands of Rohingya Muslims from Myanmar into Bangladesh; the magnitude 7.1 earthquake that hit Mexico on 19 September 2017 which resulted in more than 270 deaths; the destruction and deaths in the Caribbean, Cuba, Puerto Rico, and parts of the United States caused by Hurricanes Irma and Maria; and

20.    In economic and financial news, the continued strong performance of the Philippine Stock Exchange index (PSEi) when it nearly breached the 8,300 mark as it reached another record high on 18 September 2017, closing at 8,294 points and the announcement of an increase in the minimum wage in Metro Manila from P 481 to P 502 effective 05 October 2017.

For any clarification or questions, kindly contact Ronald D. Holmes, Pulse Asia Research President at 09189335497 (via mobile, Viber or Telegram) or at ronald.holmes@gmail.com (via email.)

Road infrastructure, flooding, and illegal drugs are among the top concerns of Filipinos at the local level 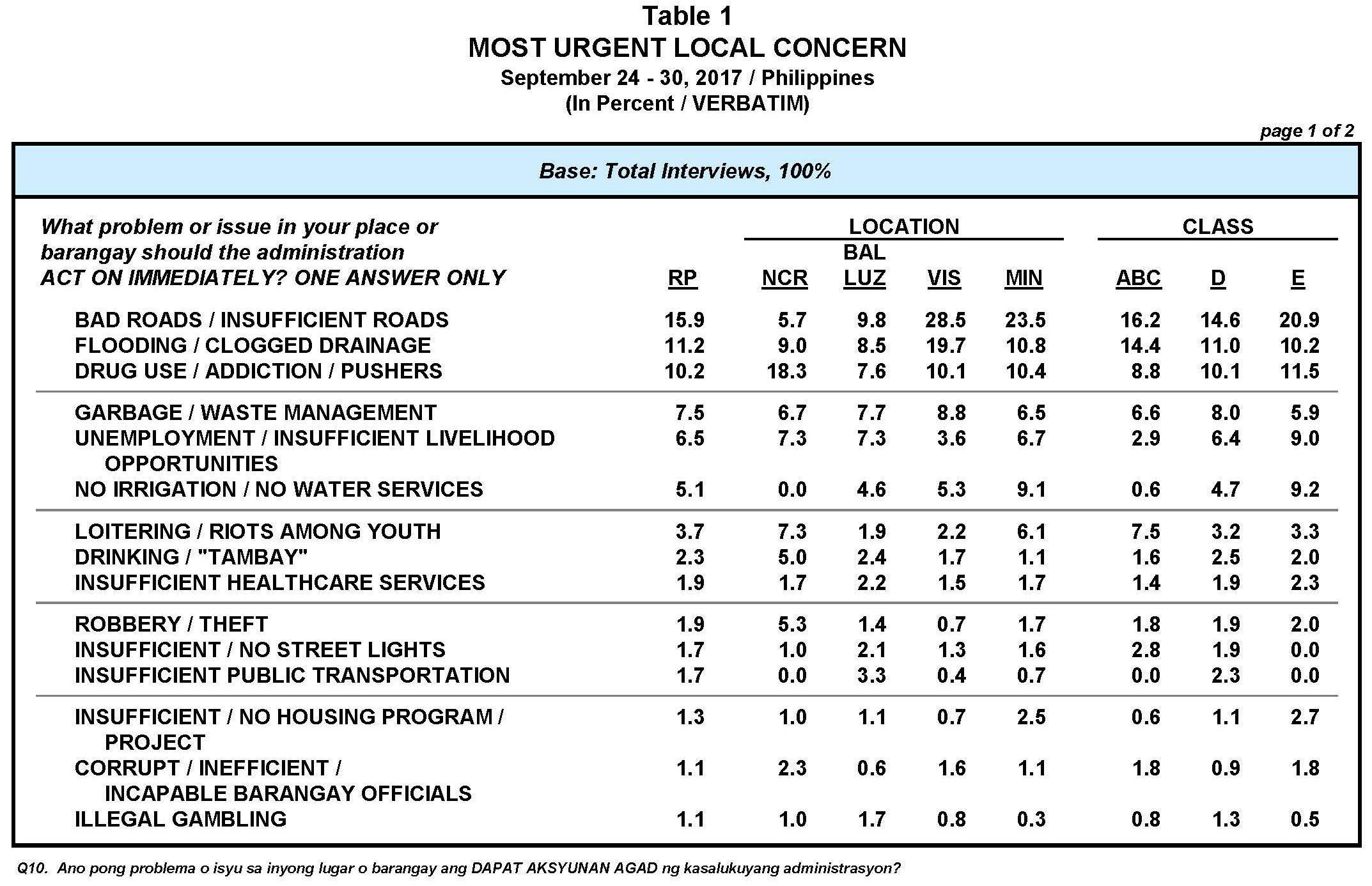 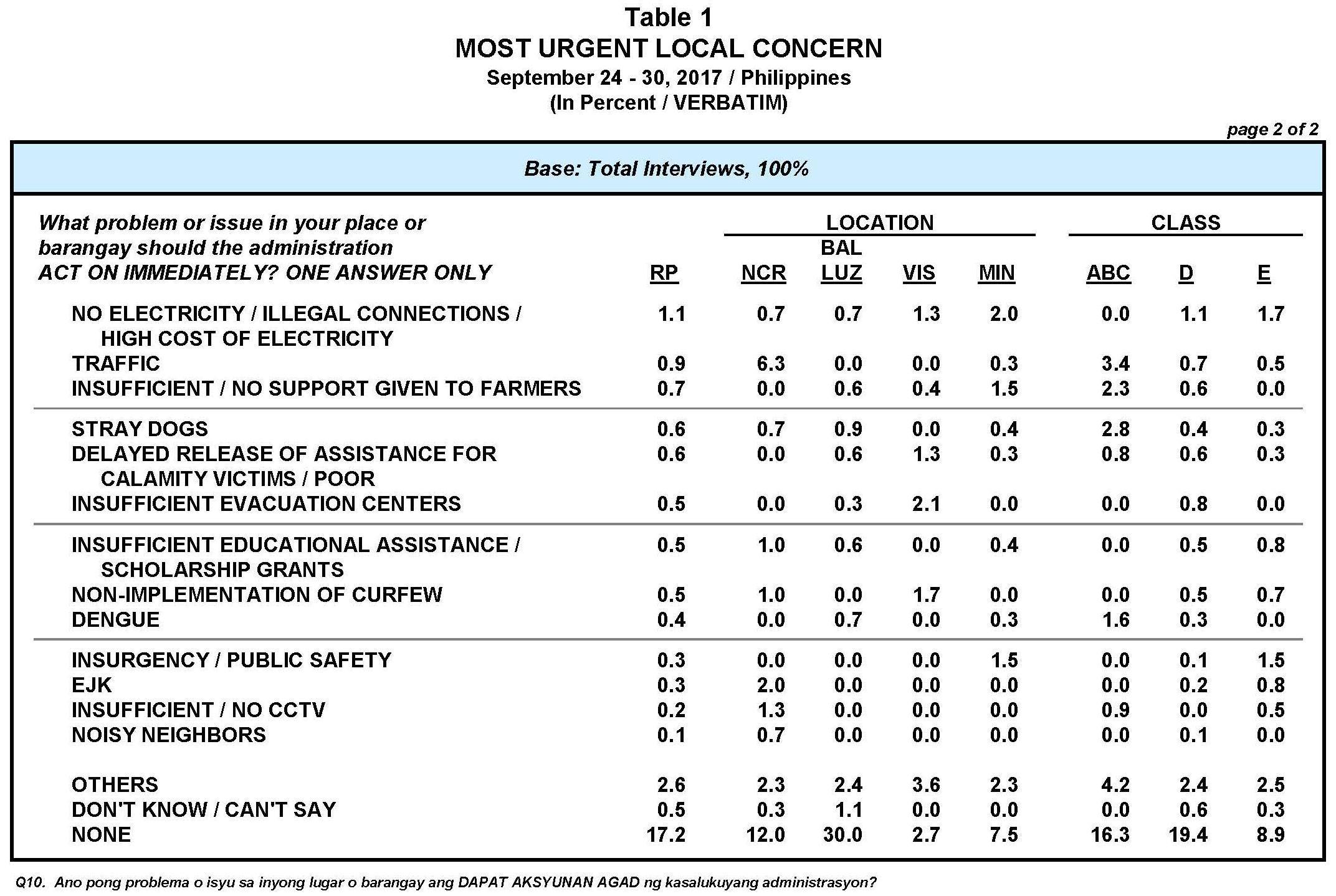 Among Metro Manilans, around the same percentages either cite illegal drugs as their most urgent local concern (18.3%) or do not mention any local issue which requires the immediate attention of the Duterte administration (12.0%). In the rest of Luzon, 30% of respondents do not identify any urgent local concern. In the Visayas and Mindanao, road infrastructure is the leading local issue among the residents (28.5% and 23.5%, respectively).

In Class ABC, the top urgent local concerns, numerically speaking, are road infrastructure (16.2%) and flooding (14.4%) while 16.3% do not cite any urgent local concern. Meanwhile, the leading local issues deemed urgent by those in Class D are road infrastructure (14.6%), flooding (11.0%), and illegal drugs (10.1%). However, 19.4% of those belonging to this socio-economic grouping do not think there is any local issue in their respective barangays which needs immediate action on the part of the national administration. As for those in Class E, they are most concerned about road infrastructure (20.9%), illegal drugs (11.5%), and flooding (10.2%).

Inflation is the leading urgent national concern among Filipinos in September 2017; public opinion on the matter remains essentially constant between June and September 2017

One out of every two Filipinos (50%) considers the need to control the rise in prices as the national concern which the present administration should act on immediately. A second group of urgent national concerns includes increasing the pay of workers (42%) and fighting criminality (36%). Meanwhile, creating more jobs (32%), fighting corruption in government (28%), and reducing poverty (28%) comprise a third set of national concerns identified as urgent by Filipinos. The fourth group of issues mentioned by Filipinos includes peace promotion (21%) and enforcement of the rule of law (16%). Filipinos are least concerned about environmental degradation (14%), reducing the amount of taxes paid by citizens (9%), controlling rapid population growth (8%), protecting the welfare of overseas Filipino workers (6%), preparing to successfully deal with terrorism (5%), defending national territorial integrity (4%), and amending the 1987 Philippine Constitution (2%). (Please refer to Table 2.) 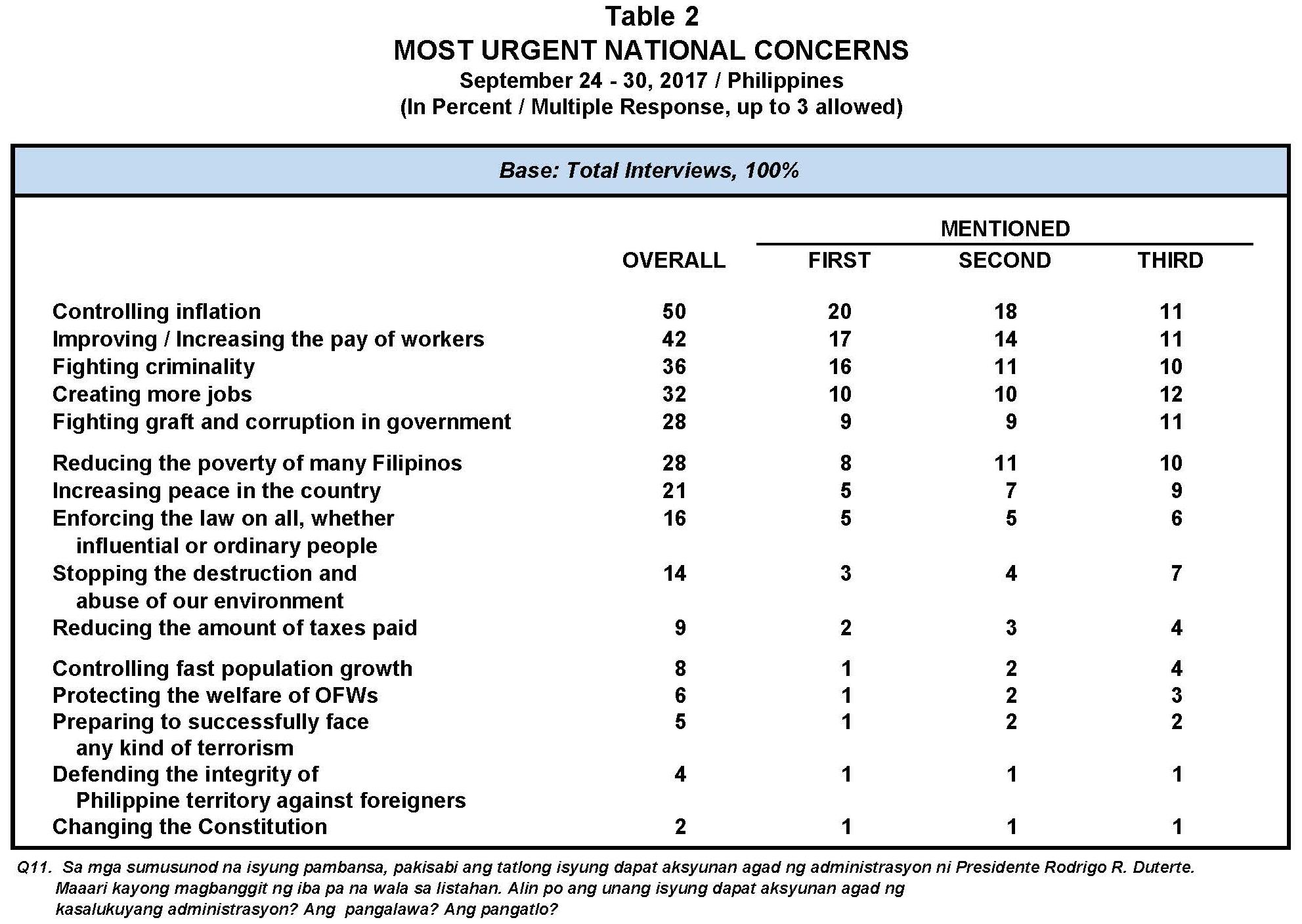 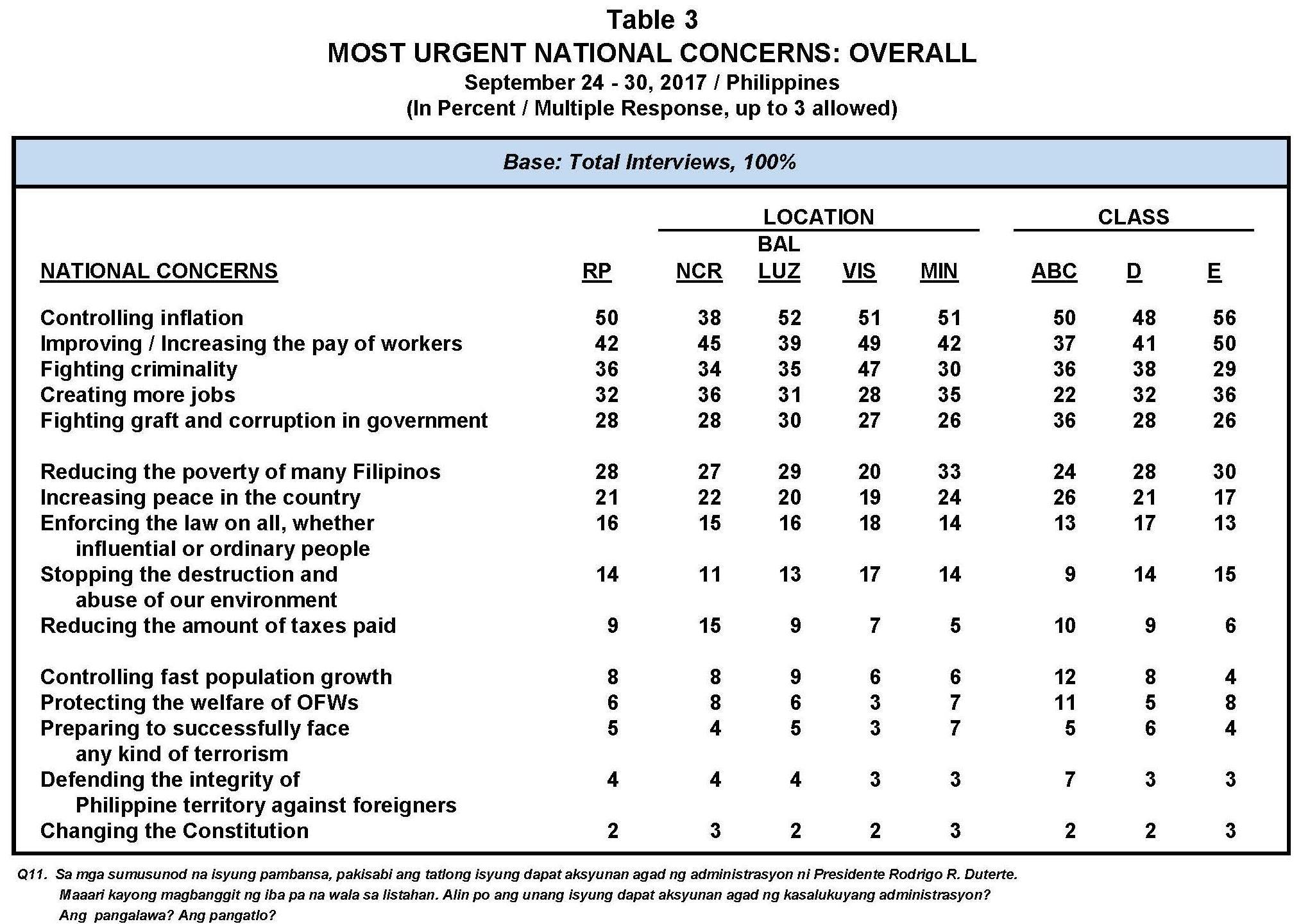 Between June and September 2017, Filipinos’ sense of urgent in relation to the 15 national issues included in this survey probe hardly changes. The only marked movements in public opinion regarding this matter are the increase in the levels of concern about controlling inflation and fighting criminality (both at +8 percentage points). Year-on-year, there is a single notable change – the 13-percentage point rise in the percentage of Filipinos who consider the need to control inflation as an urgent national concern. (Please refer to Table 4.) 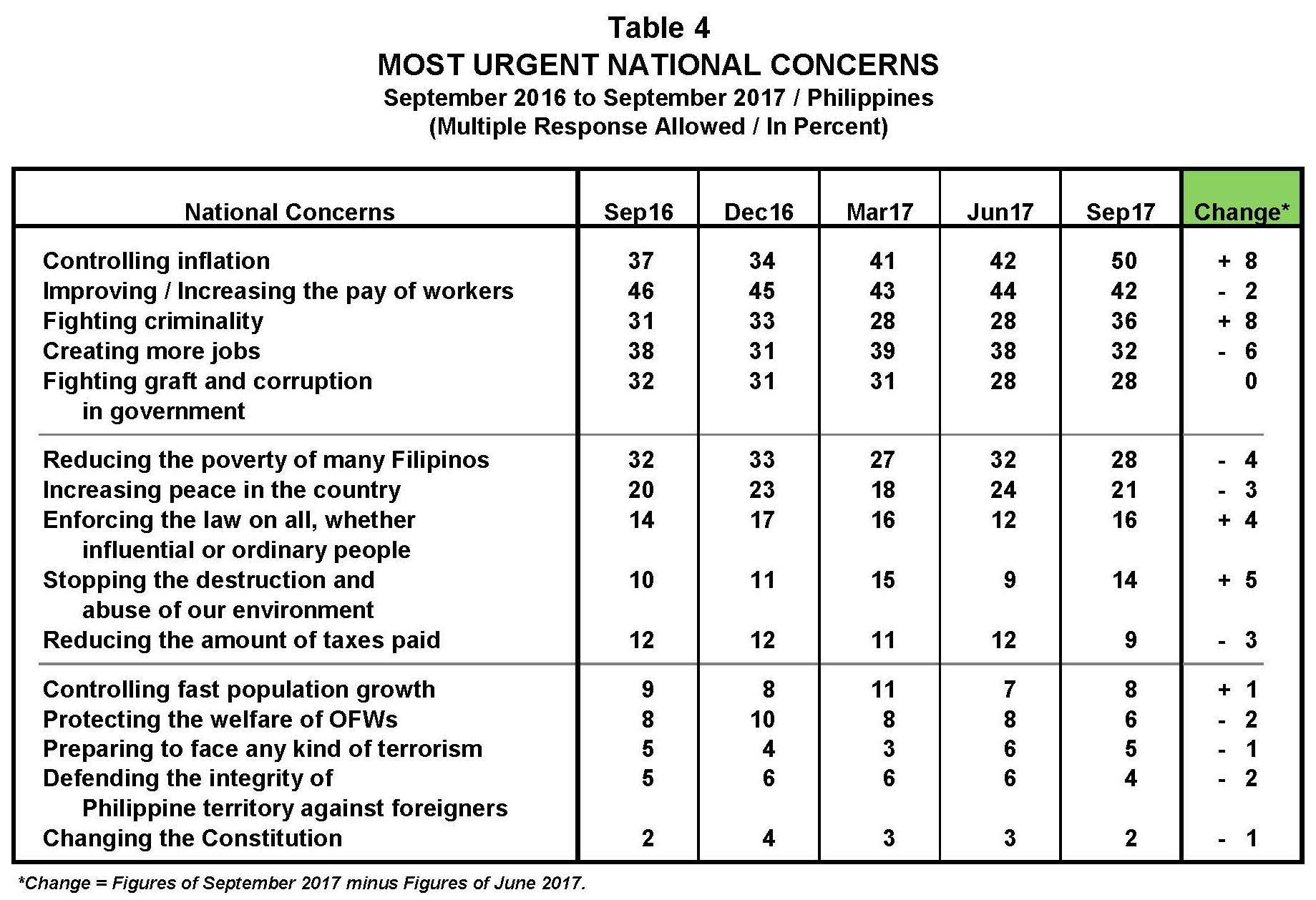 Most Filipinos continue to express appreciation for the work done by the national administration in the following areas: (1) responding to the needs of those affected by calamities (78%); (2) fighting criminality (78%); (3) protecting the welfare of overseas Filipino workers (76%); (4) fighting corruption (70%); (5) protecting the environment (68%); (6) enforcing the rule of law (67%); (7) promoting peace (67%); (8) defending national territorial integrity (65%); (9) creating more jobs (63%); and (10) increasing workers’ pay (58%). The two issues on which the Duterte administration fails to achieve a majority approval score are poverty reduction (49%) and inflation (45%), the latter being the top urgent national concern of Filipinos (50% citing). Levels of disapproval for the administration’s handling of these 12 selected issues range from 3% on disaster response to 21% on inflation while levels of indecision on the matter vary from 16% on criminality to 36% on poverty reduction. (Please refer to Table 5.) 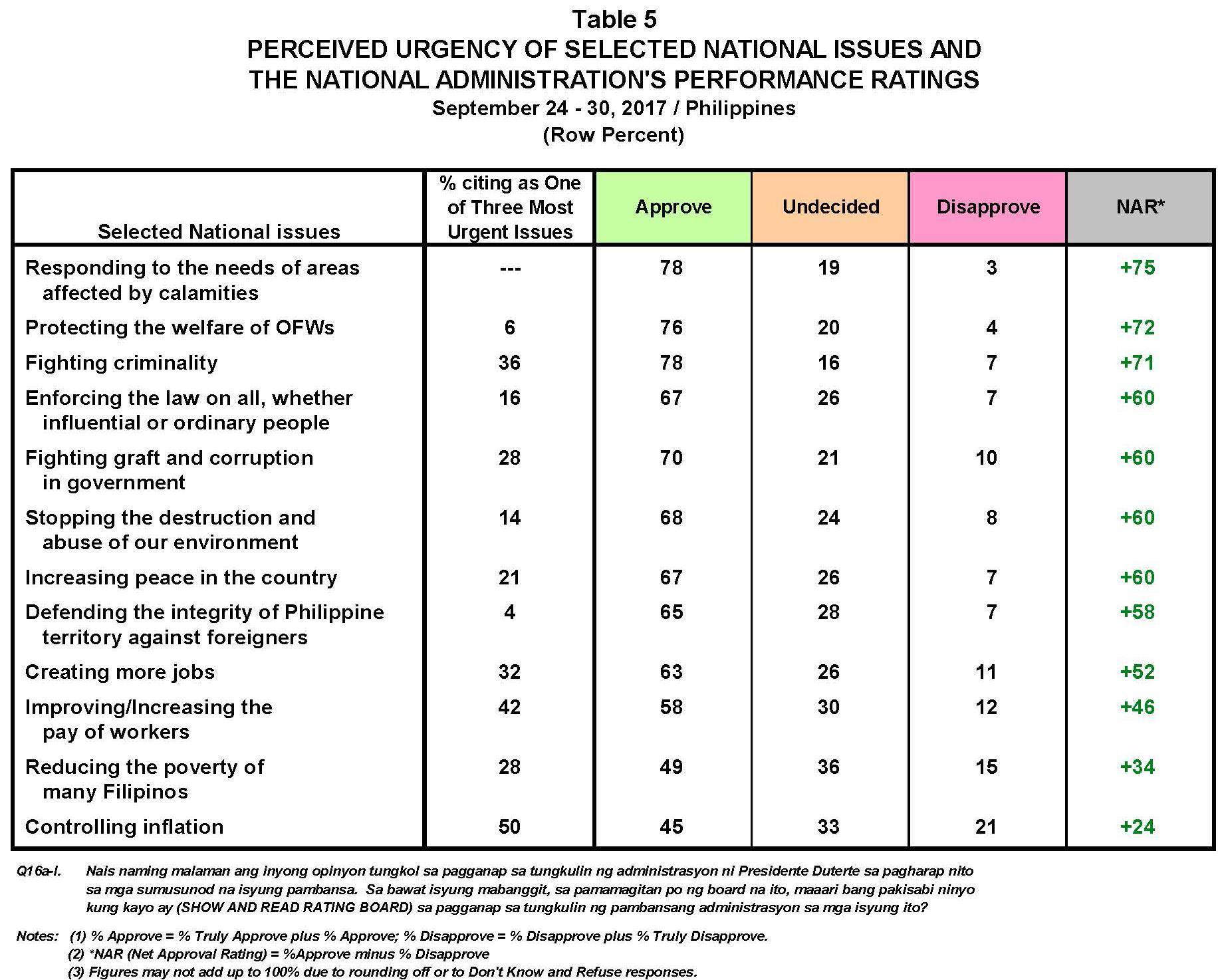 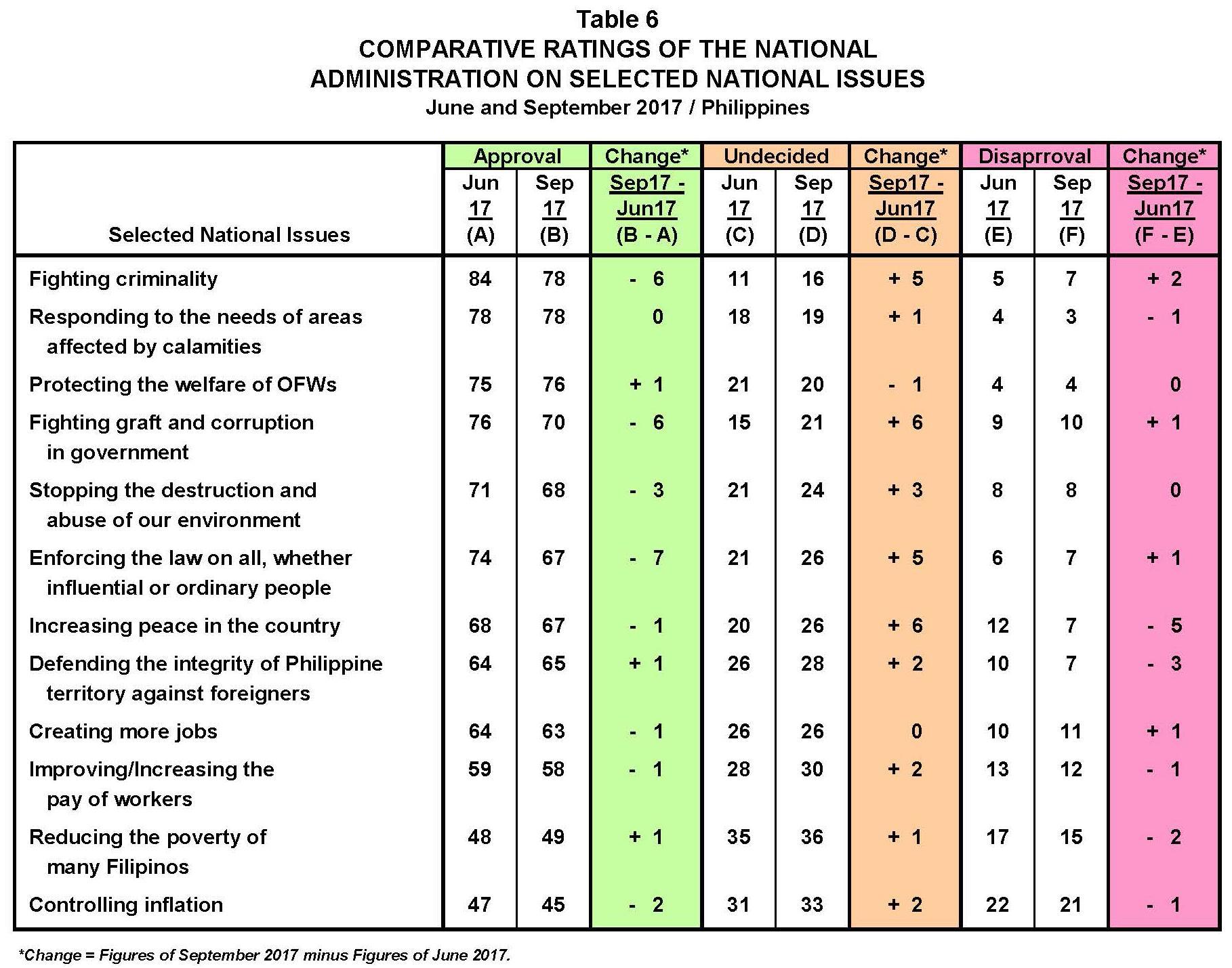