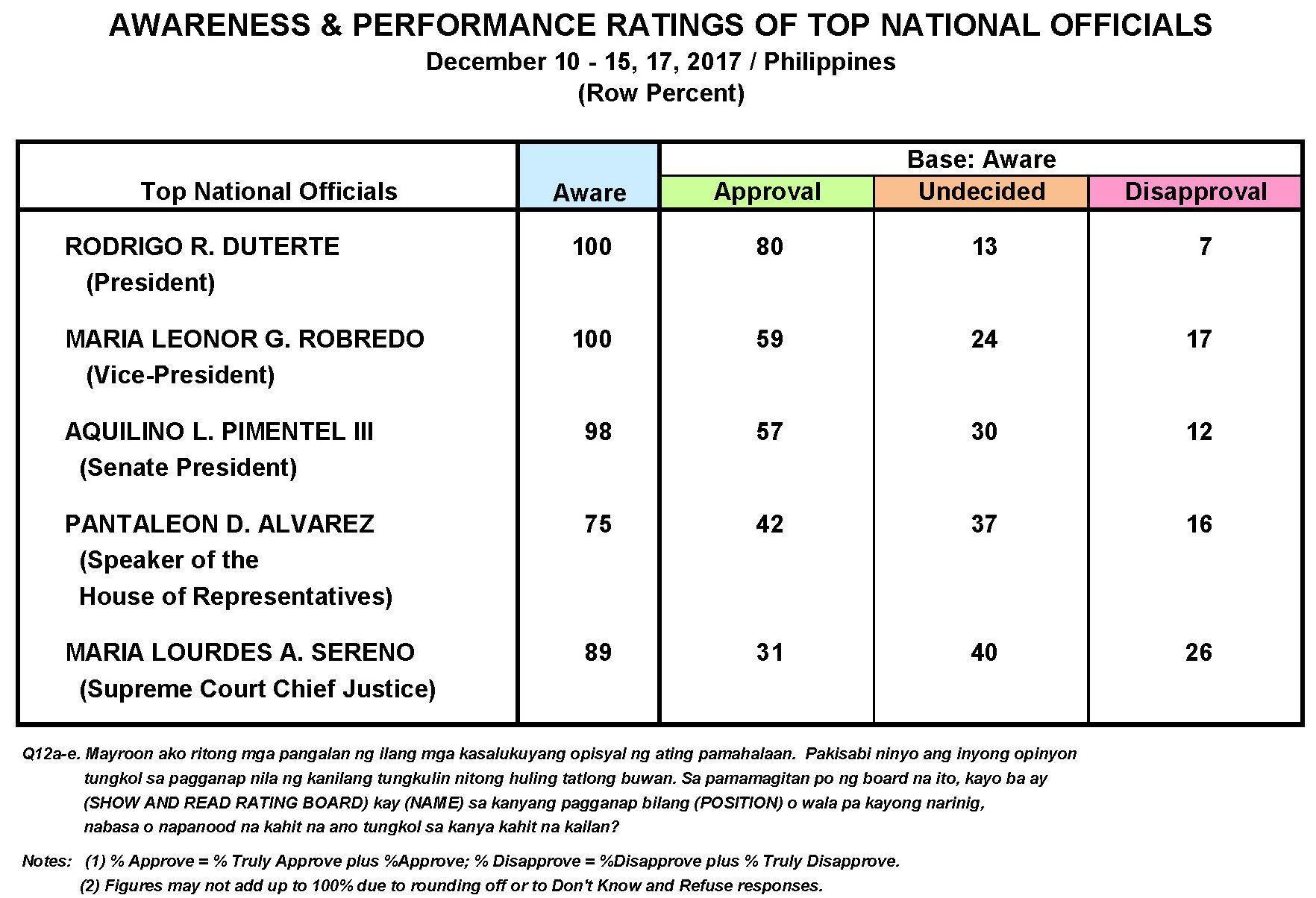 Pulse Asia Research, Inc. is pleased to share with you some findings on the Performance and Trust Ratings of the Top Philippine Government Officials and Key Government Institutions from the December 2017 Ulat ng Bayan national survey. We request you to assist us in informing the public by disseminating this information.

Among the news developments which preoccupied Filipinos in the weeks prior to and during the conduct of the survey interviews are:

1. The ratification by Congress of the Tax Reform for Acceleration and Inclusion (TRAIN) bill which seeks to raise more revenues for the Duterte administration’s infrastructure program, among others, and its approval of the P 3.7 T national budget for 2018;

2. The approval by Congress of President Rodrigo R. Duterte’s request to extend the declaration of martial law in Mindanao for a year or until 31 December 2018;

4. The suspension of the Department of Health’s (DOH) dengue immunization program following the admission of Sanofi, the manufacturer of the Dengvaxia vaccine, that it would have severe or even fatal effects on those who have no prior dengue virus infection; the Senate investigation into the matter in the course of which former President Benigno S. Aquino III appeared before the Senate Blue Ribbon and Health Committees on 14 December 2017 to defend his administration’s decision to use the Dengvaxia vaccine;

5. The return of the Philippine National Police (PNP) and the National Bureau of Investigation (NBI) to the anti-illegal drugs campaign of the Duterte administration, with the Philippine Drug Enforcement Agency (PDEA) remaining as the lead agency; President Duterte’s remarks that his “war on drugs” will last until his term ends in June 2022; the resignation of Dangerous Drugs Board (DDB) Chairperson Dionisio Santiago, following his public criticism of the construction of a 10,000-bed drug rehabilitation center in Nueva Ecija by the Duterte administration;

6. The dismissal by the Department of Justice (DOJ) of the drug charges against former Bureau of Customs (BOC) Commissioner Nicanor Faeldon and several other BOC officials arising from the smuggling of P 6.4 B worth of shabu in May 2017, a move that was criticized and deemed as premature by some senators;

7. President Duterte’s issuance of a proclamation declaring the Communist Party of the Philippines (CPP) and the National People’s Army (NPA) as terrorist organizations, this following the cancellation of peace negotiations between these groups and the Philippines government; the President’s order for the military and police to shoot any armed NPA member on sight;

8. The call for a revolutionary government made by supporters of President Duterte to allow him to efficiently address key problems in the country and to hasten the shift to a federal form of government, a proposal deemed unconstitutional by the President’s critics; Malacañang clarified that President Duterte will establish a revolutionary government only if the country is on the verge of collapse;

9. The launching of the Manananggol Laban sa Extrajudicial Killings (Manlaban sa EJK), an alliance of legal professionals and law students critical of the human rights violations in the implementation of the administration’s “war on drugs” and the Catholic Church’s “Heal Our Land” campaign which seeks an end to the killings in connection with the ongoing anti-illegal drugs campaign in the country;

10. The Sandiganbayan’s decision finding probable cause to try former President Benigno S. Aquino III for his role in Oplan Exodus which resulted in the death of 44 members of the Philippine National Police-Special Action Forces (PNP-SAF) in Mamasapano, Maguindanao on 25 January 2015;

11. The filing of plunder raps against former Department of Transportation and Communications (DOTC) Secretaries Joseph Emilio A. Abaya and Manuel A. Roxas II, former Department of Budget and Management (DBM) Secretary Florencio B. Abad, and several other officials under the Aquino administration in connection with the Metro Rail Transit (MRT) Line 3 maintenance system contract;

12. Changes in the Duterte administration including the resignation of Department of Transportation (DOTr) Undersecretary for Railways Cesar Chavez’s resignation amidst the problems that continue to plague the operations of the MRT 3 system, the appointment of Commission on Elections (COMELEC) Commissioner Sheriff Abas as the commission’s new chairperson and of former DOJ Secretary Agnes Devanadera as head of the Energy Regulatory Commission (ERC), and the sacking of all five (5) commissioners of the President Commission for the Urban Poor (PCUP) due to the excessive number of trips taken by its members and their failure to hold meetings; the extension of the terms of Armed Forces of the Philippines (AFP) Chief of Staff Rey Leonardo Guerrero and of Philippine National Police (PNP) Chief of Staff Ronald dela Rosa until April 2018;

13. President Duterte’s participation in the Asia-Pacific Economic Cooperation (APEC) Summit in Vietnam and the Philippines’ hosting of the 31st Association of Southeast Asian Nations (ASEAN) Summit in November 2017;

14. In economic and financial news, the entry of China Telcom as a third player in the Philippine telecommunications industry; the improvement in the Philippines’ credit rating by Fitch Ratings from “BBB-“ to “BBB”, a first since March 2013; the fluctuations in the prices of petroleum products which went up in November 2017 due to the supply cuts by major exporters but declined the following month to reflect changes in global oil prices; and the release of economic figures for the third quarter of 2017 which show the Philippine economy growing by 6.9%, an improvement attributed to sustained strong export growth and better public spending.

For any clarification or questions, kindly contact Dr. Ana Maria Tabunda, Research Director of Pulse Asia Research at 09189436816 or Ronald D. Holmes, Pulse Asia Research President at 09189335497 (via mobile, Viber or Telegram) or at ronald.holmes@gmail.com (via email.) 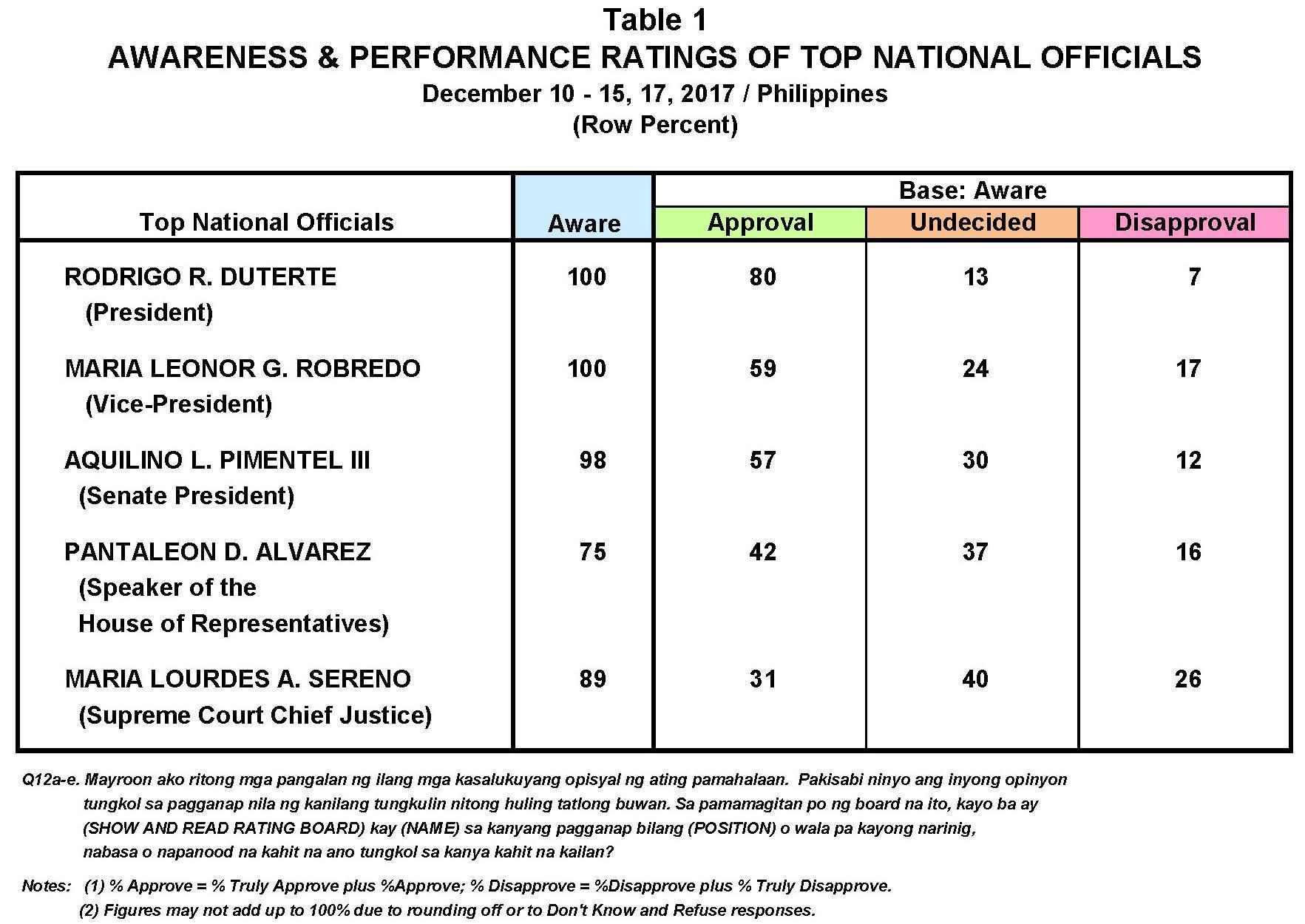 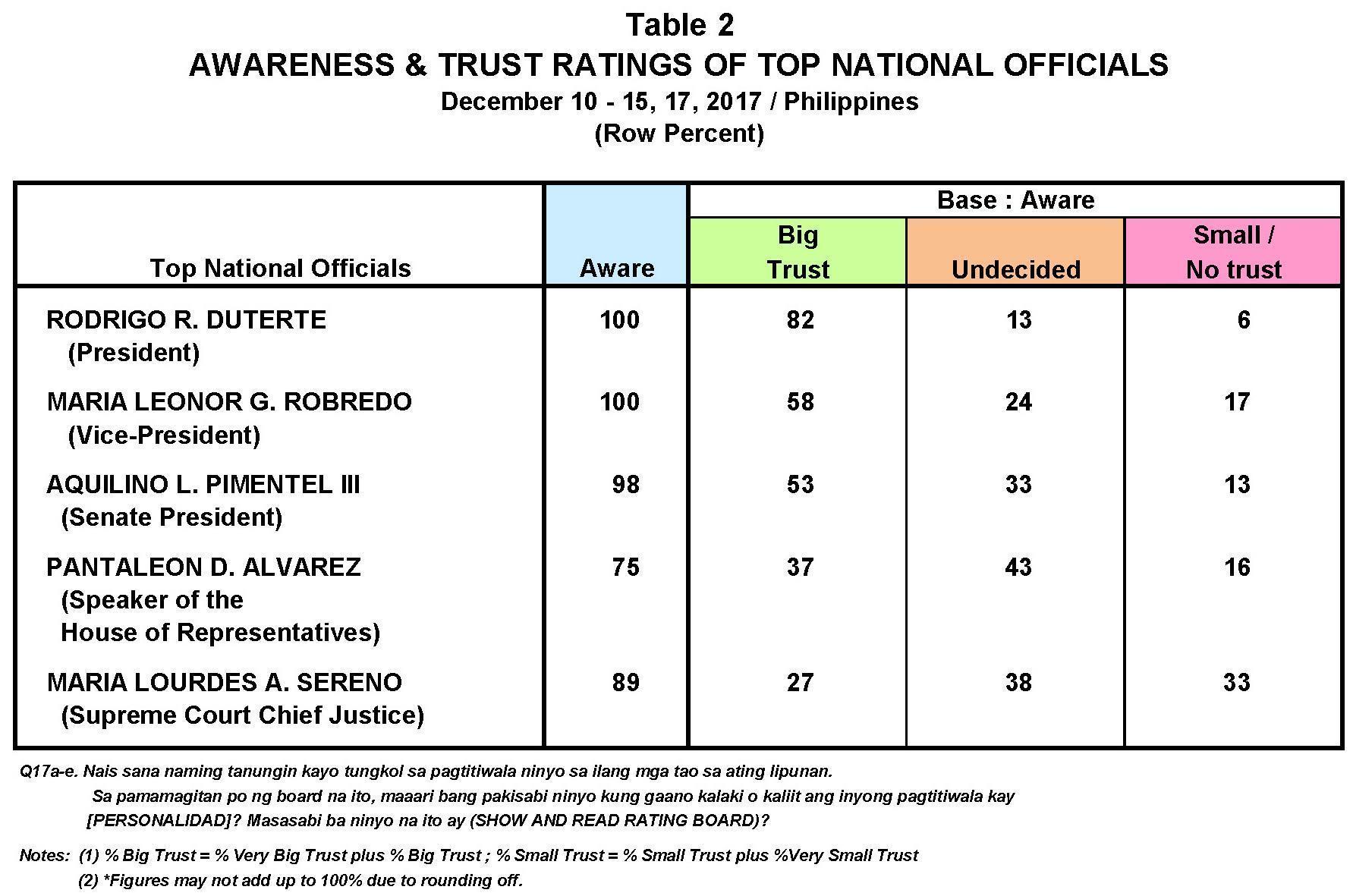 On the other hand, House Speaker Pantaleon D. Alvarez has almost the same approval and indecision ratings (42% versus 37%) as well as trust and indecision scores (37% versus 43%). In the case of Supreme Court Chief Justice Maria Lourdes A. Sereno, ambivalence is the plurality sentiment toward her performance (40%) while practically the same percentages of Filipinos either distrust her or express indecision on the matter of trusting or distrusting her (33% versus 38%).

Among the top Philippine government officials, it is Supreme Court Chief Justice Sereno who obtains the highest disapproval and distrust ratings (26% and 33%, respectively). In contrast, Filipinos are least inclined to disapprove of and distrust President Duterte (7% and 6%, respectively). 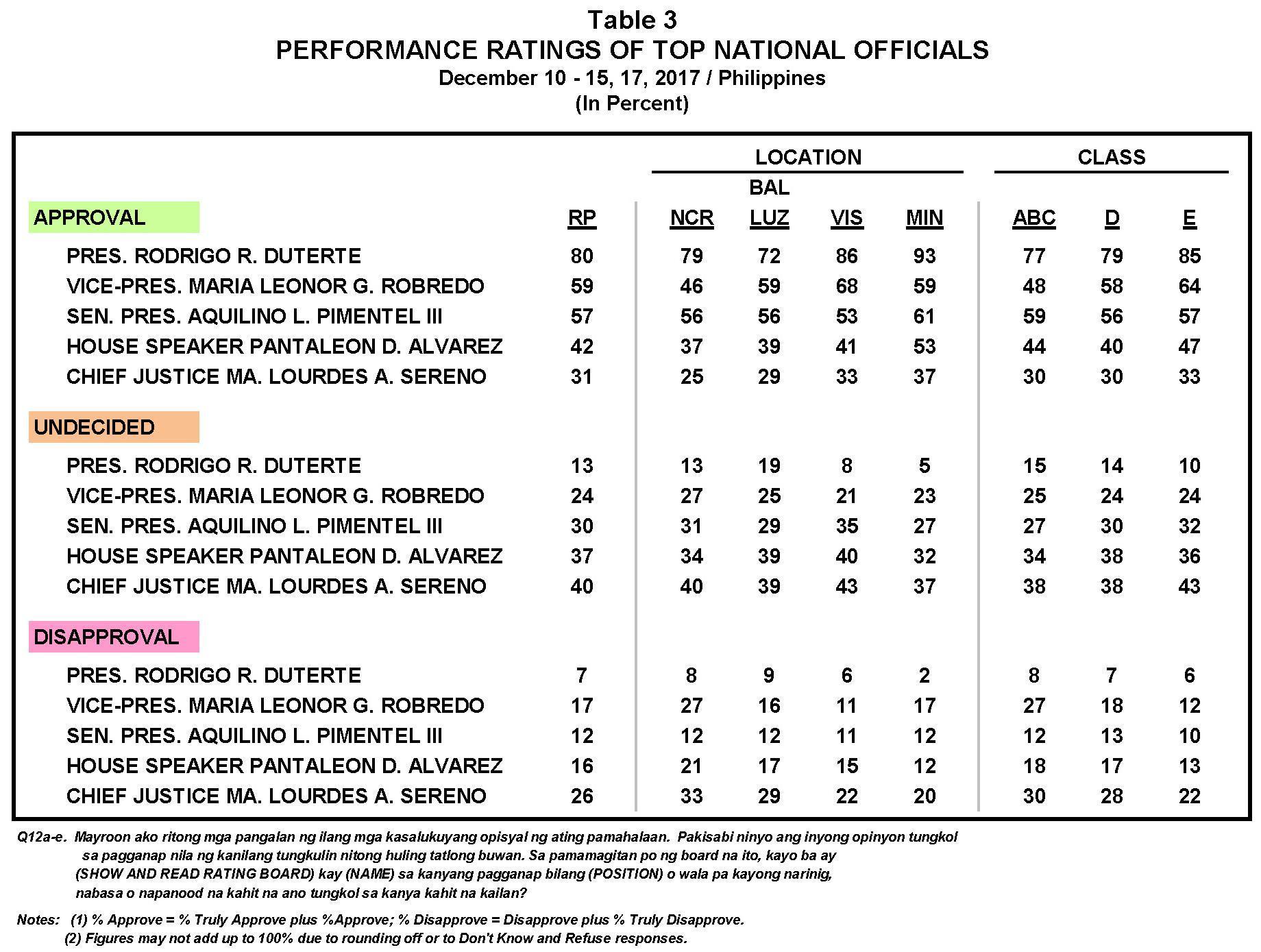 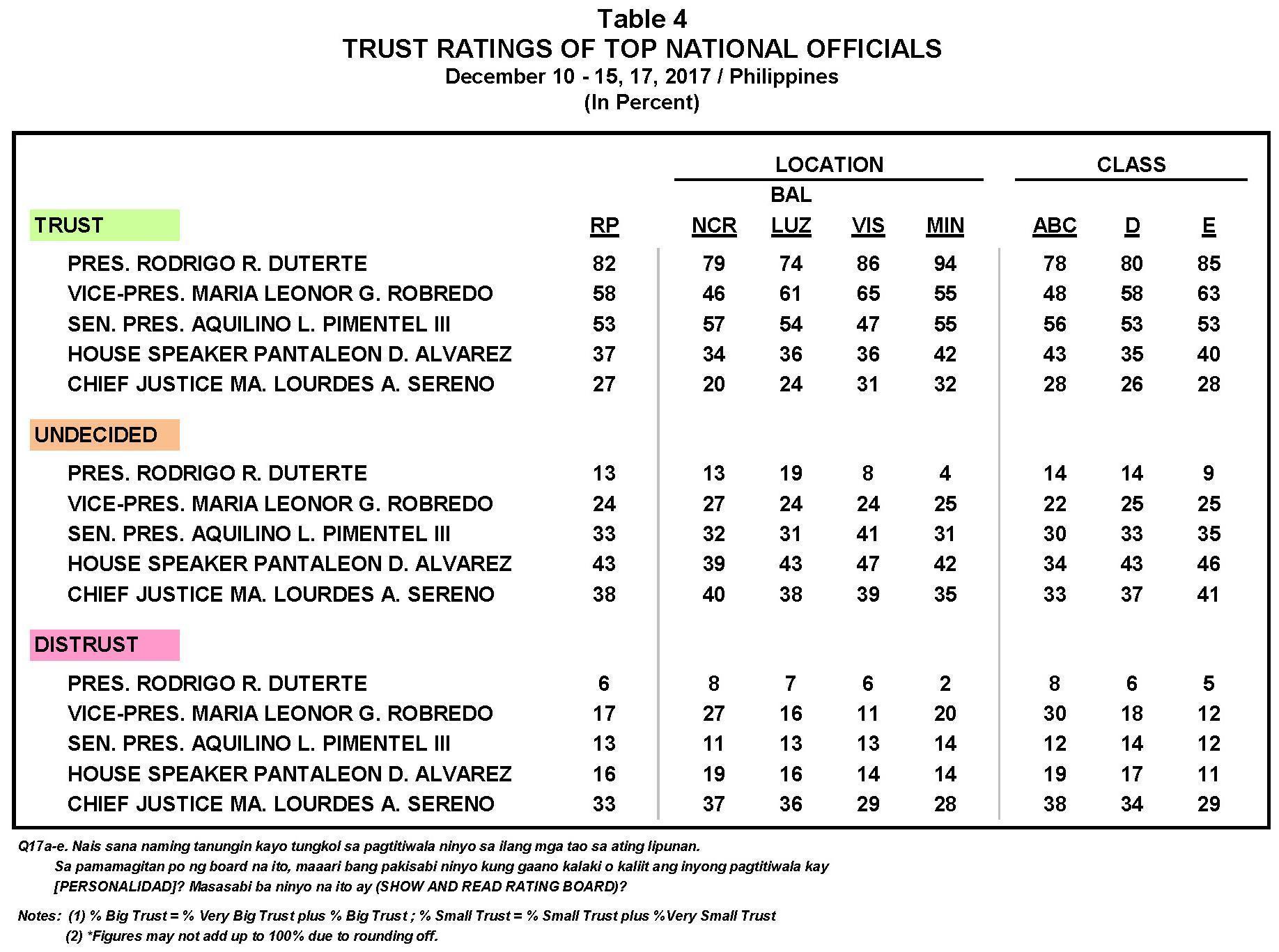 Vice-President Robredo posts majority approval and trust scores in nearly each geographic area (59% to 68% and 55% to 65%, respectively) and socio-economic grouping (58% to 64% and 58% to 63%, respectively). The exceptions are Metro Manilans and those in the best-off Class ABC who continue to withhold majority approval and trust ratings from the Vice-President (both 46% in Metro Manila and both 48% in Class ABC).

The only majority score obtained by House Speaker Alvarez is his 53% approval rating in Mindanao. The latter registers basically the same approval and indecision ratings in the other areas (37% to 41% versus 34% to 40%) and all classes (40% to 47% versus 34% to 38%). With respect to House Speaker Alvarez’s trustworthiness, indecision is the plurality sentiment in Class D (43%) while essentially the same trust and indecision levels are recorded across geographic areas (34% to 42% versus 39% to 47%) and in Classes ABC and E (40% to 43% versus 34% to 46%).

As for Supreme Court Chief Justice Sereno, public opinion concerning her work and trustworthiness is split three-ways in Class ABC (30%, 38%, and 30% performance ratings and 28%, 33%, and 38% trust ratings). Visayans and Mindanaoans are also equally divided in their assessment of the latter’s trustworthiness (31%, 39%, and 29% in the Visayas and 32%, 35%, and 28% in Mindanao) while those in the rest of Luzon are split relatively evenly as regards her performance (29%, 39%, and 29%, respectively). In Metro Manila, the Supreme Court Chief Justice posts around the same disapproval and indecision ratings (33% versus 40%) as well as distrust and indecision scores (37% versus 40%).

In addition, Supreme Court Chief Justice Sereno registers nearly or exactly the same approval and indecision figures in the Visayas (33% versus 43%), Mindanao (both at 37%), and Class E (33% versus 43%). Ambivalence is the plurality opinion toward the latter’s work in Class D (38%). With respect to her trustworthiness, practically the same percentages in the rest of Luzon and Class D say either that they distrust Supreme Court Chief Justice Sereno (36% and 34%, respectively) or that they are undecided on the matter (38% and 37%, respectively). A big plurality in Class E (41%) cannot say if they trust or distrust the latter. 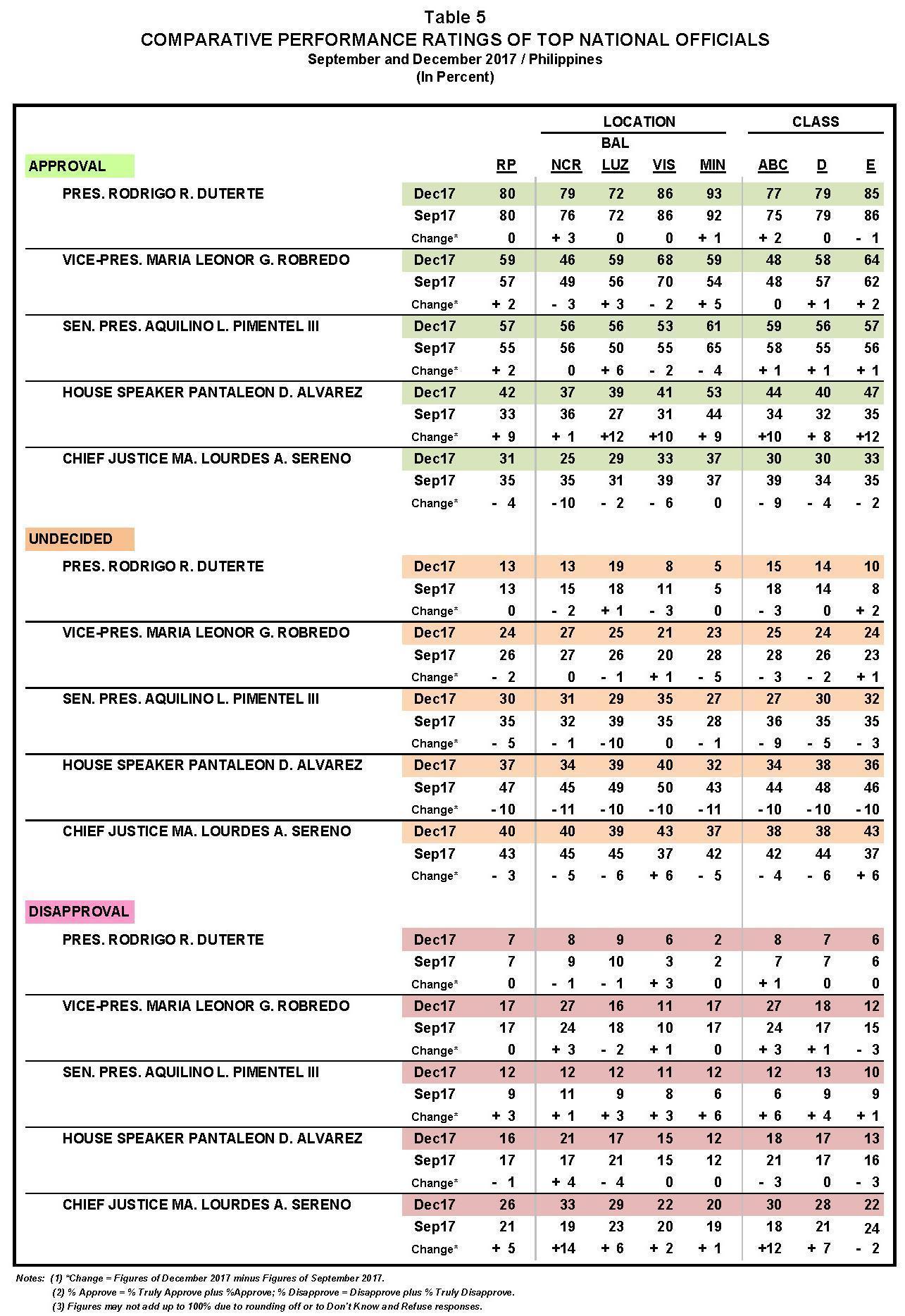 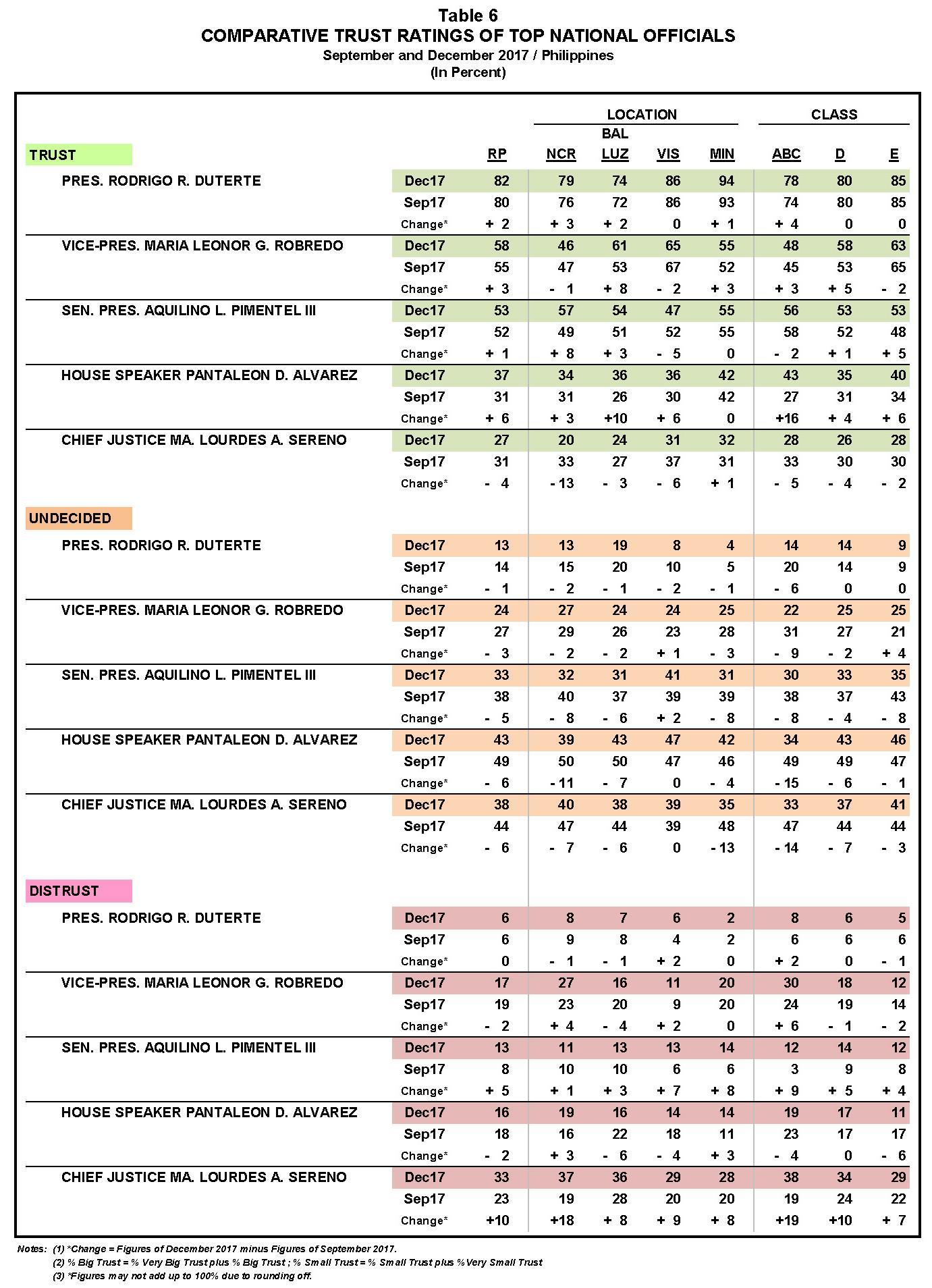 Of the three (3) key institutions of government, only the Senate registers majority approval and trust scores in December 2017; public assessment of the performance and trustworthiness of these institutions are essentially constant during the period September to December 2017 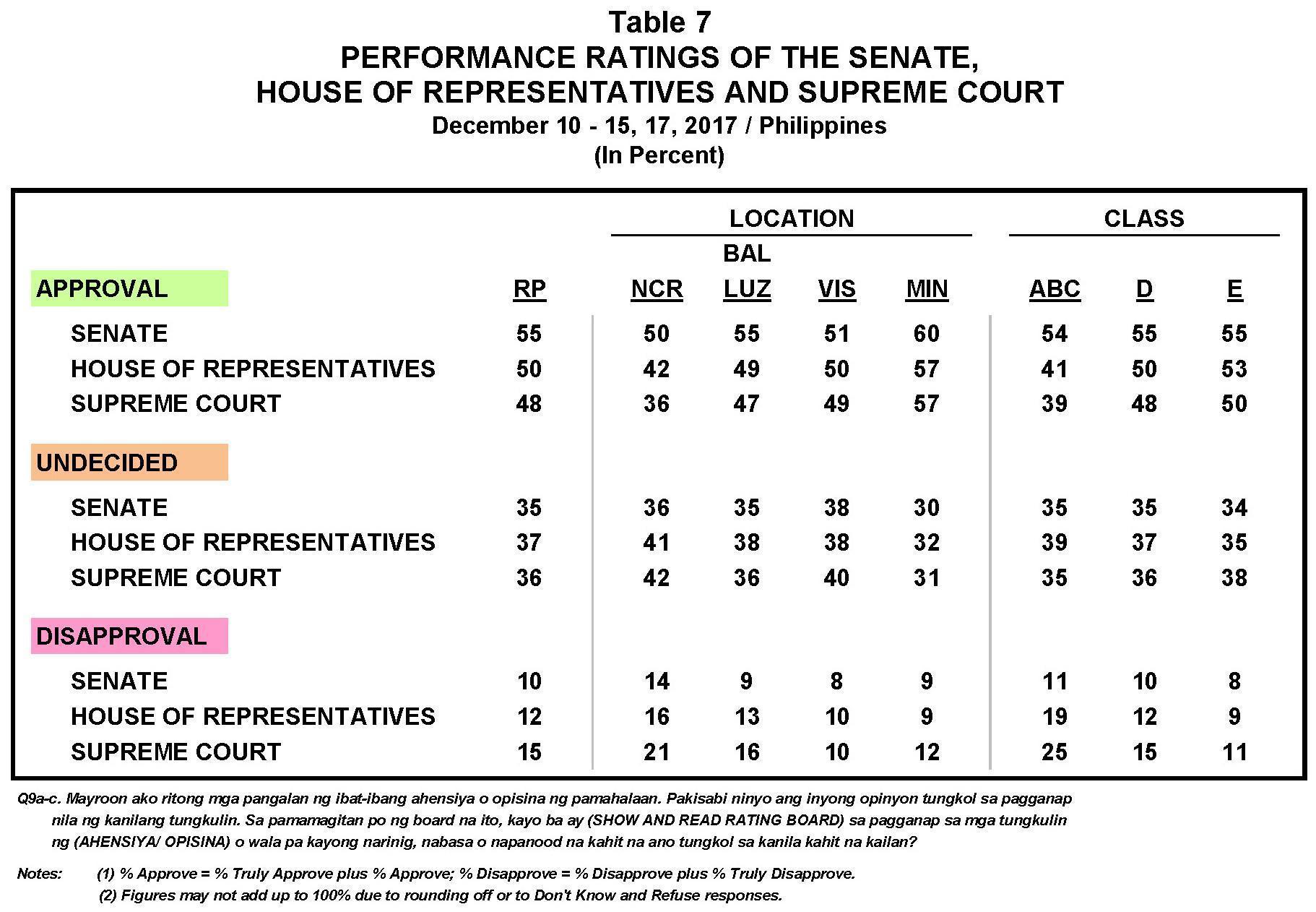 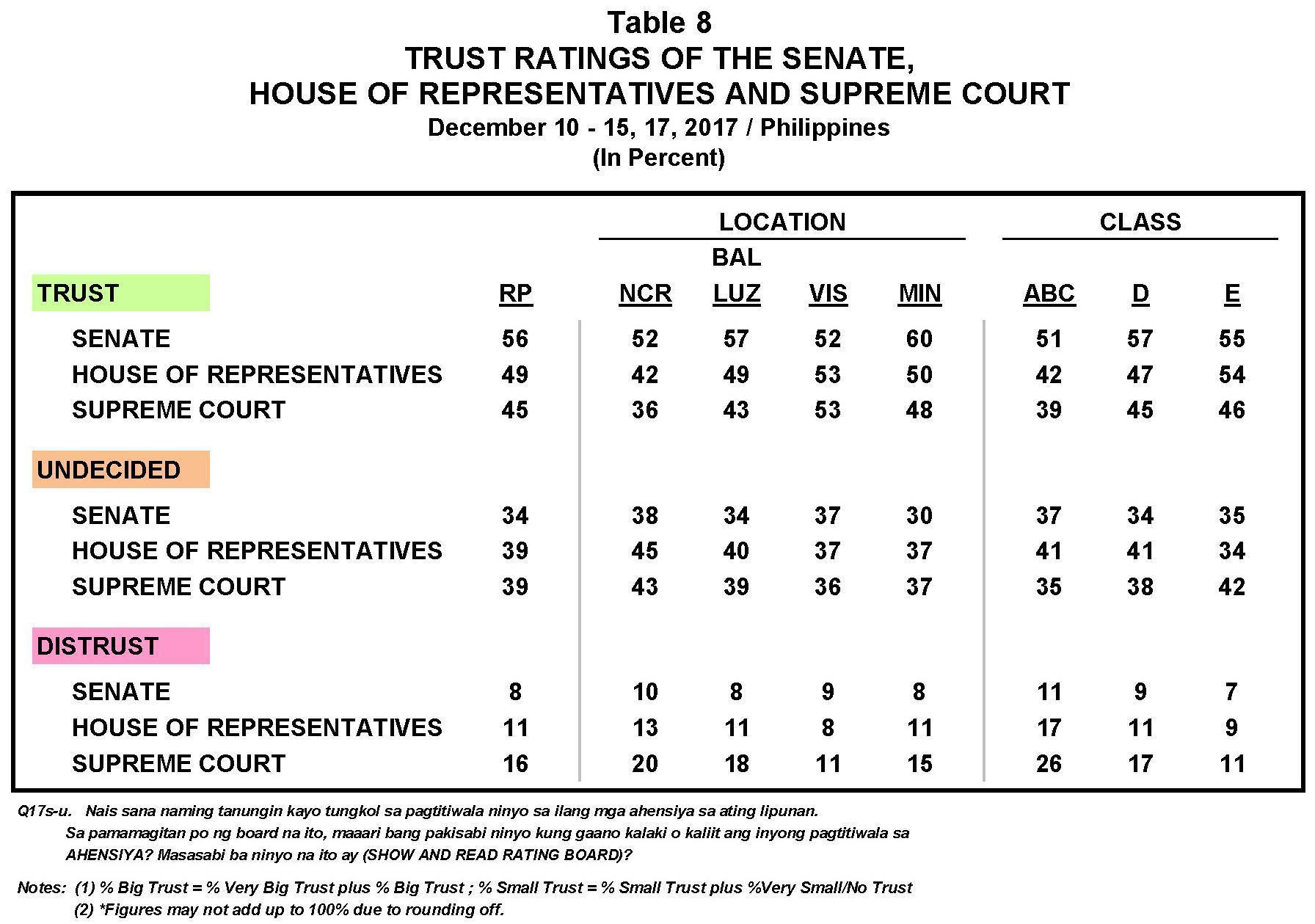 Appreciation for the performance of the Lower House is the predominant sentiment in Mindanao (57%) and Class E (53%). Half of those in the Visayas and Class D (50%) also approve of the latter’s work. On the other hand, practically the same percentages of those in Metro Manila, the rest of Luzon, and Class ABC are either appreciative of the performance of the House of Representatives (41% to 49%) or ambivalent on the matter (38% to 41%). (Please refer to Table 7.)

A little over half of those in the Visayas (53%) and Class E (54%) trust the House of Representatives while half of those in Mindanao (50%) express the same sentiment toward the legislative chamber. On the other hand, basically the same percentages of those in Metro Manila, the rest of Luzon, Class ABC, and Class D either trust the Lower House (42% to 49%) or are unable to say whether they trust or distrust it (40% to 45%).  (Please refer to Table 8.)

Most Mindanaoans (57%) have a positive assessment of the Supreme Court’s work while near majority approval ratings are recorded in Classes D and E (48% and 50%, respectively). About the same approval and indecision ratings are obtained by the Supreme Court in Metro Manila (36% versus 42%), the rest of Luzon (47% versus 36%), and the Visayas (49% versus 40%) but public opinion concerning its work is split three-ways in Class ABC (39%, 35%, and 25%, respectively). (Please refer to Table 7.)

There are few changes in the performance and trust ratings of these government institutions between September and December 2017. Approval for the work done by the House of Representatives and the Supreme Court becomes more notable in the rest of Luzon (both at +12 percentage points). However, the latter experiences a decline in its approval score in the Visayas (-16 percentage points). (Please refer to Table 9.) 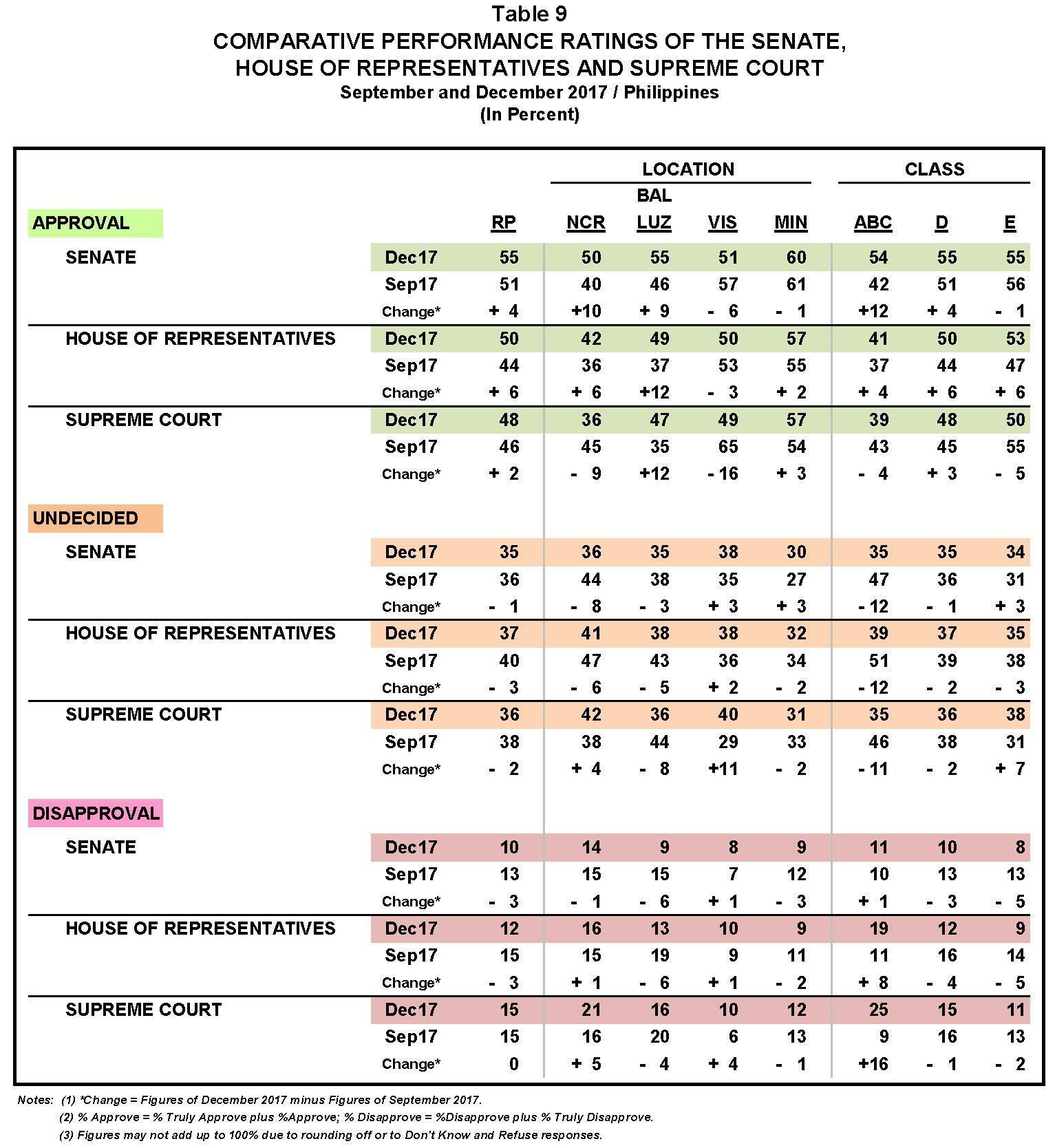 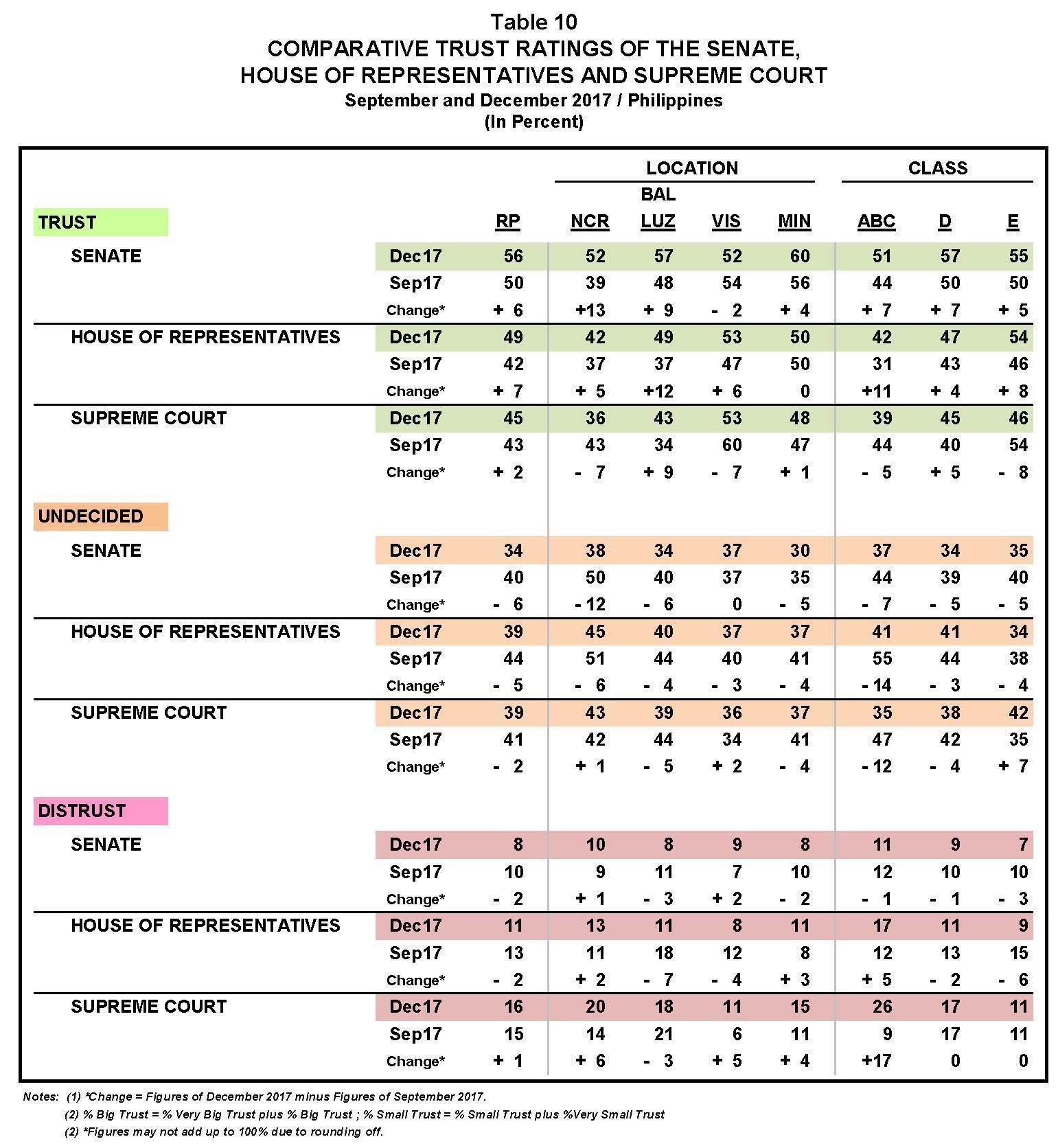