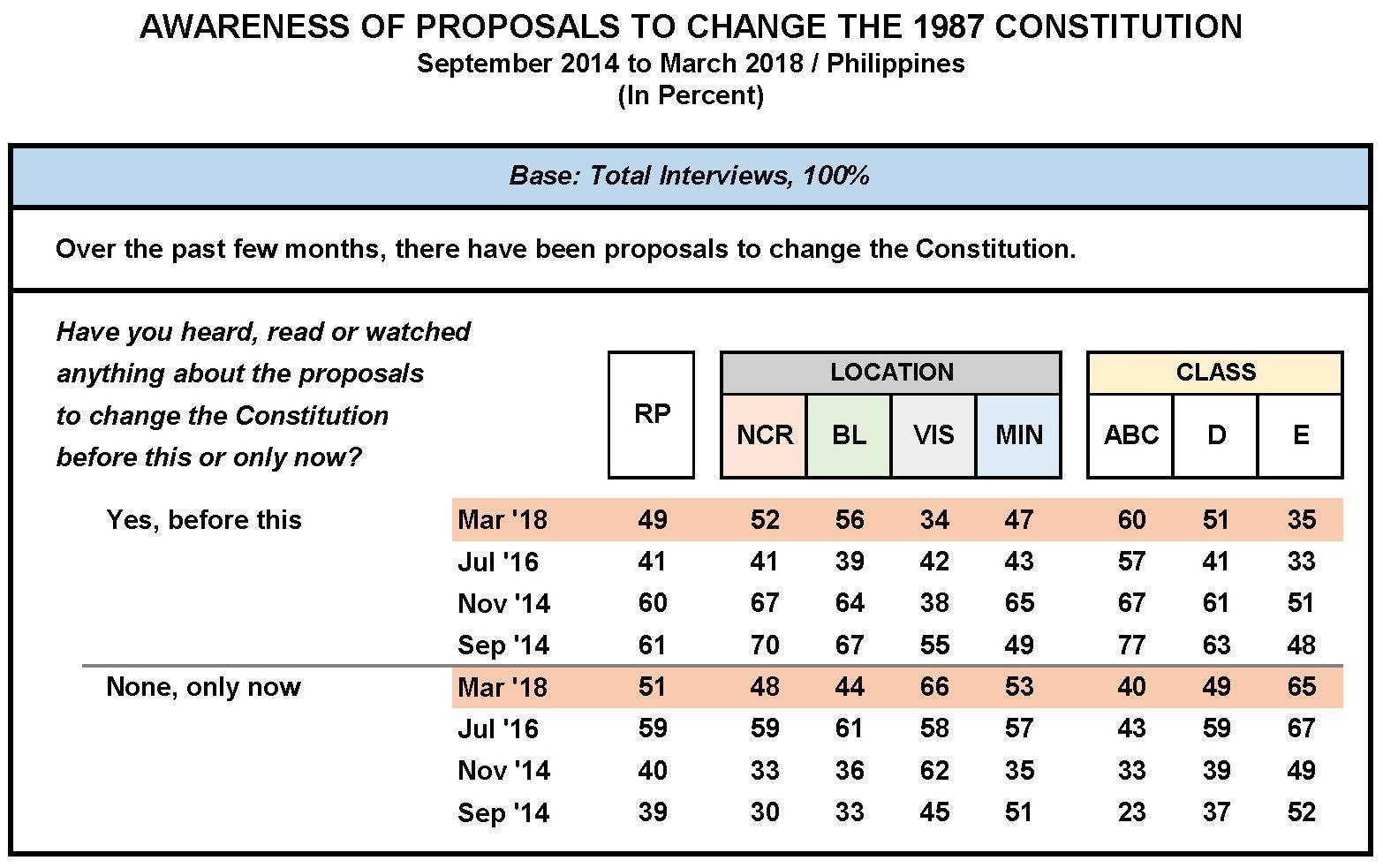 Pulse Asia Research, Inc. is pleased to share with you some findings on Charter Change from the March 2018 Ulat ng Bayan national survey. We request you to assist us in informing the public by disseminating this information.

Awareness of proposals to change the 1987 Philippine Constitution is reported by 49% of Filipinos; about one out of four Filipinos (23%) are in favor of charter change now

Almost the same percentages of Filipinos are aware or not aware of proposals to change the 1987 Philippine Constitution now (49% versus 51%). Majority levels of awareness are posted in Metro Manila (52%), the rest of Luzon (56%), Class ABC (60%), and Class D (51%). In contrast, most of those in the Visayas (66%), Mindanao (53%), and Class E (65%) have not heard, read, or watched anything about the recent charter change proposals in the country. (Please refer to Table 1.) 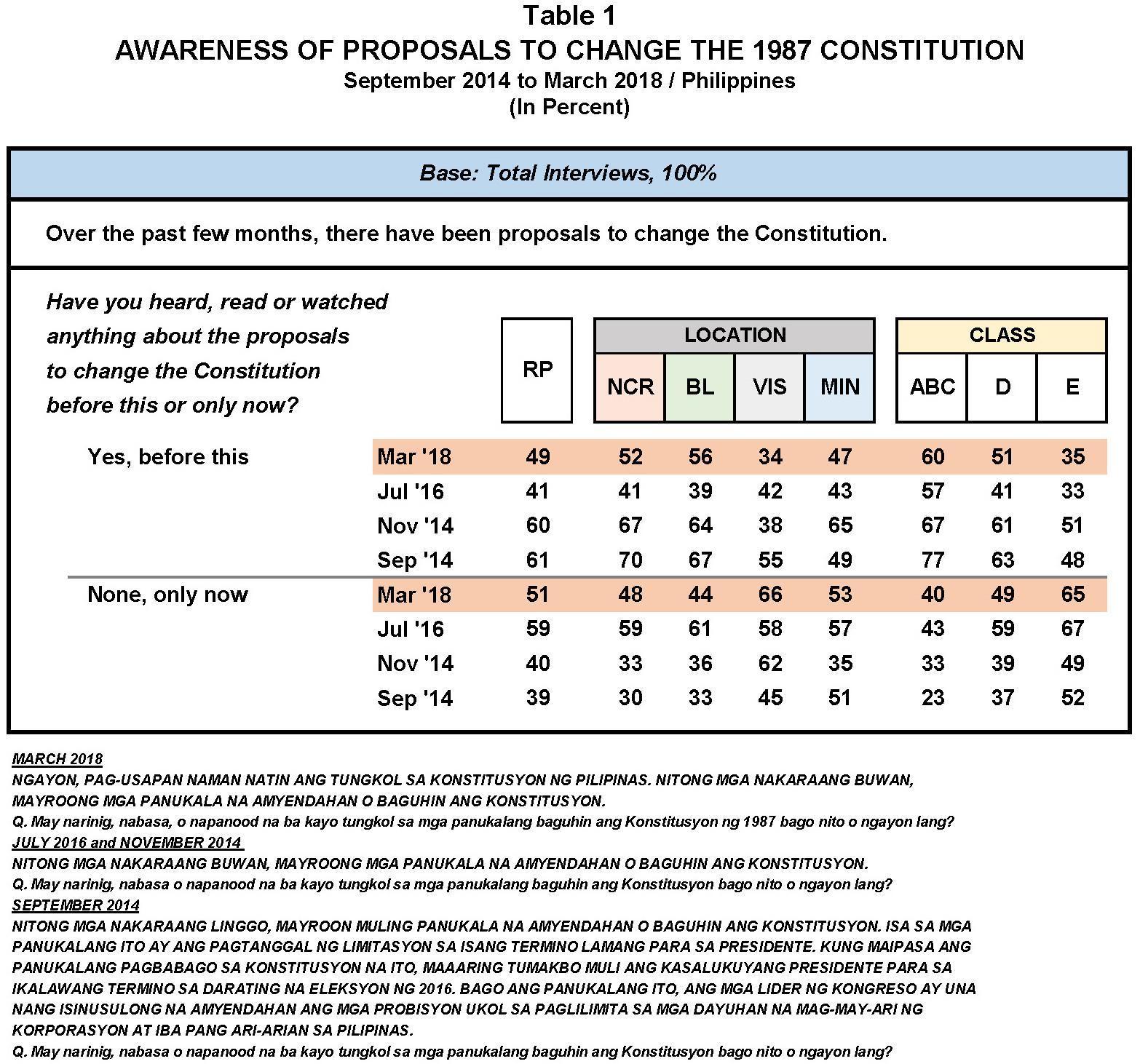 It may be recalled that in July 2016, a lower level of awareness of charter change proposals was recorded by Pulse Asia Research (41%). At this time, the only majority awareness figure in the different geographic areas and socio-economic classes was posted in Class ABC (57%). However, back in September and November 2014, most Filipinos said they knew about moves to change the 1987 Philippine Constitution (61% and 60%, respectively). Furthermore, majority awareness levels are registered in virtually all geographic areas and every socio-economic class both in September 2014 (55% to 70% and 63% to 77%, respectively) and November 2014 (64% to 67% and 51% to 67%, respectively). The only exceptions are Mindanao (49%) and Class E (48%) in September 2014 and the Visayas in November 2014 (38%).

At the time of the conduct of this survey, 64% of Filipinos are not in favor of amending the 1987 Philippine Constitution. Of this total, 32% say they are open to charter change sometime in the future but not at present and 32% are completely opposed to any amendments, whether now or at any other time. In all geographic areas and most socio-economic classes, majority levels of opposition to charter change now are recorded (58% to 71% and 61% to 68%, respectively). Half of those in Class E (50%) share this sentiment. In contrast, 23% of Filipinos are supportive of charter change now while the rest (13%) are ambivalent on the matter. (Please refer to Table 2.) 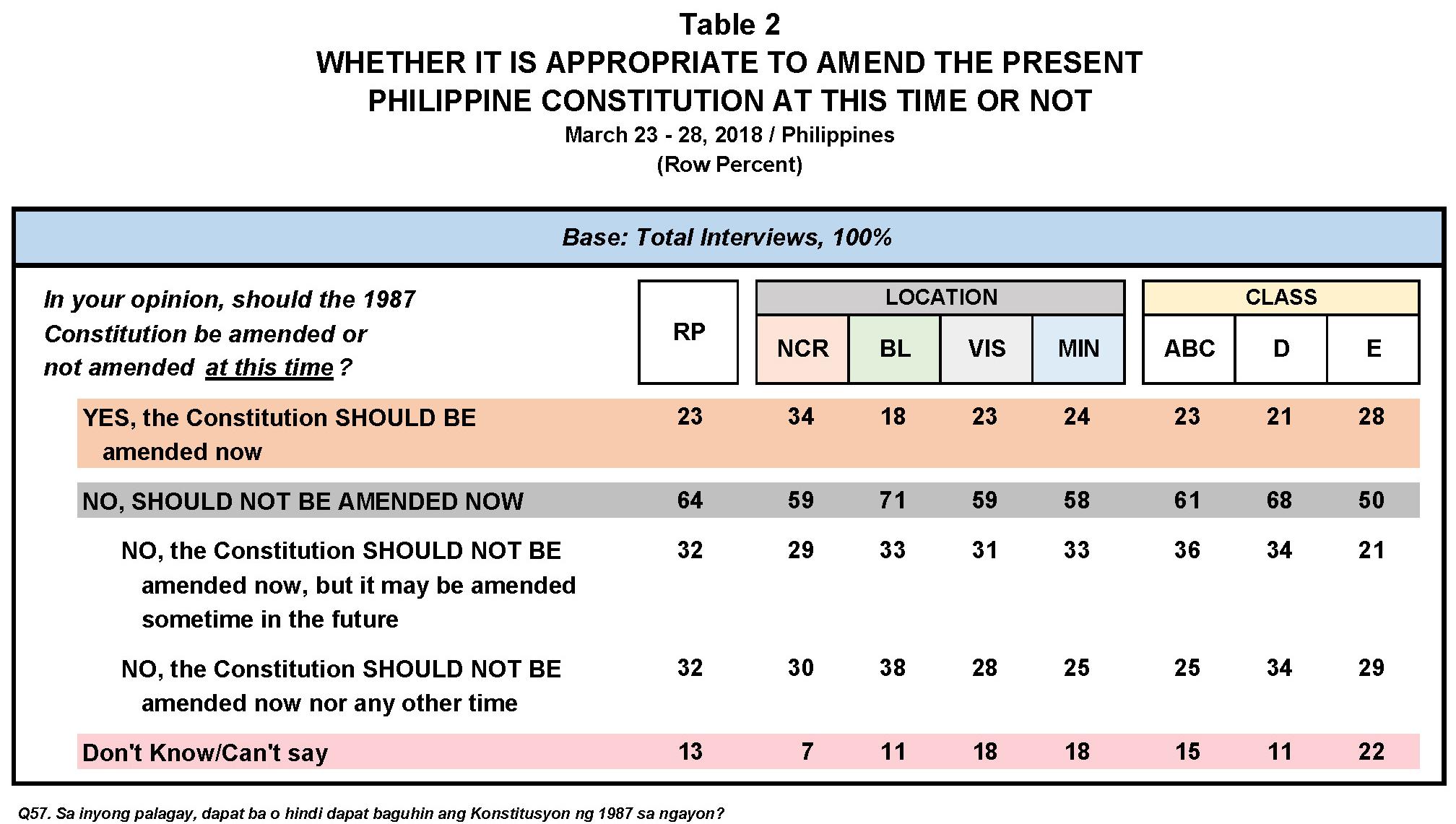 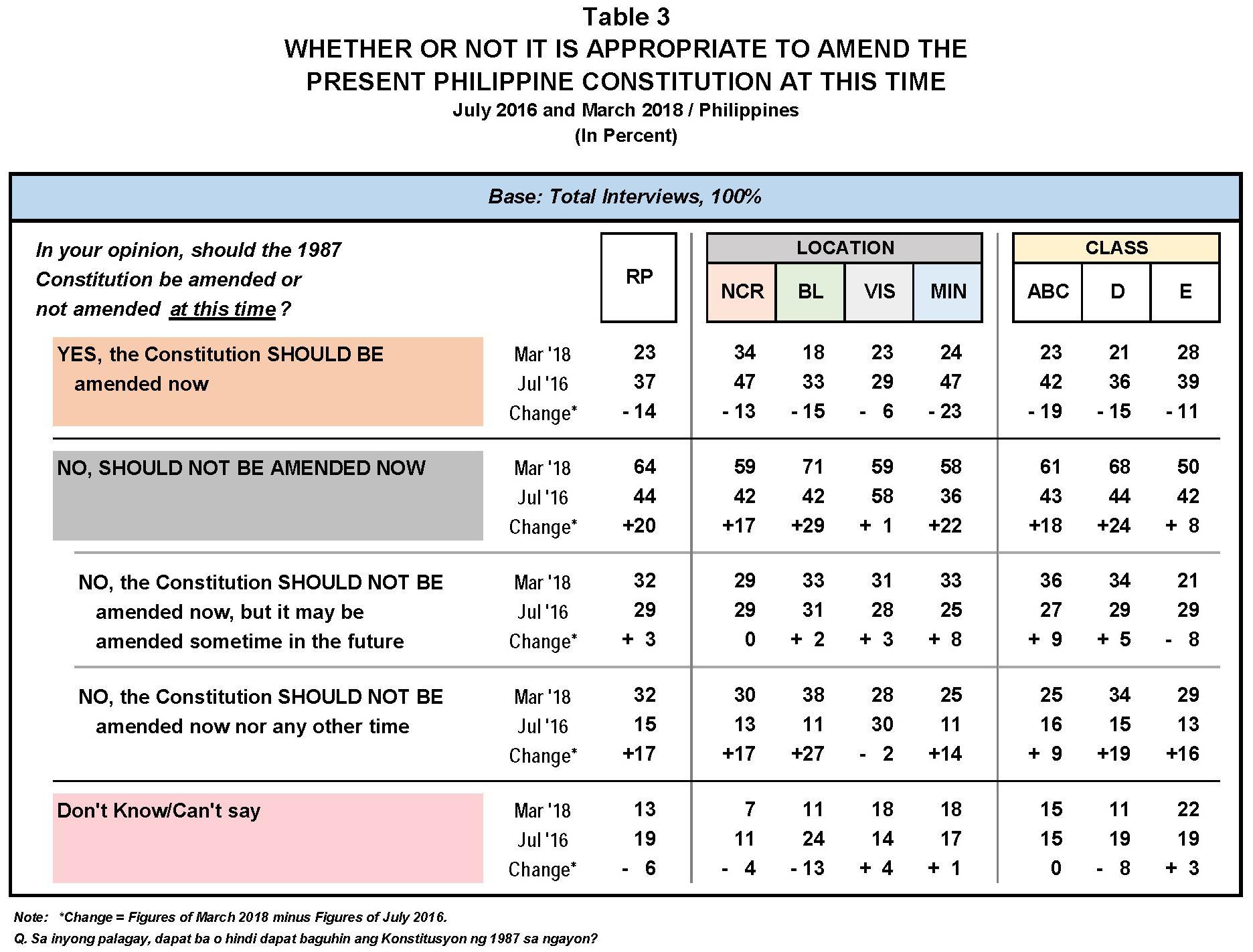 Three (3) out of every four (4) Filipinos (75%) have little/almost none/no knowledge at all about the 1987 Philippine Constitution; knowledge levels have not changed between July 2016 and March 2018

In March 2018, 75% admit to knowing little or having almost/completely no knowledge of the 1987 Philippine Constitution. Sizable to big majority figures are registered across geographic areas and socio-economic classes (70% to 82% and 63% to 82%, respectively). Of the total figure (75%), 42% report having little knowledge and 34% have almost none/no knowledge at all. Nearly to exactly half of Metro Manila (50%), Mindanawons (49%), and those in Class D (44%) have little knowledge while about the same percentages of those in the rest of Luzon, the Visayas, and Classes ABC and D have either little or almost none/no knowledge at all (31% to 44% versus 31% to 39%). (Please refer to Table 4.)

Among those with at least enough knowledge of the 1987 Philippine Constitution (25%), 21% have a sufficient amount of knowledge while only 4% claim to know a great deal. Virtually the same figures are posted across geographic areas and socio-economic classes, with sufficient knowledge levels ranging from 16% to 25% and 15% to 28% while great knowledge levels range from 2% to 5% and 3% to 9%, respectively). These figures do not differ in any significant way from those obtaining in July 2016. (Please refer to Tables 4 and 5.) 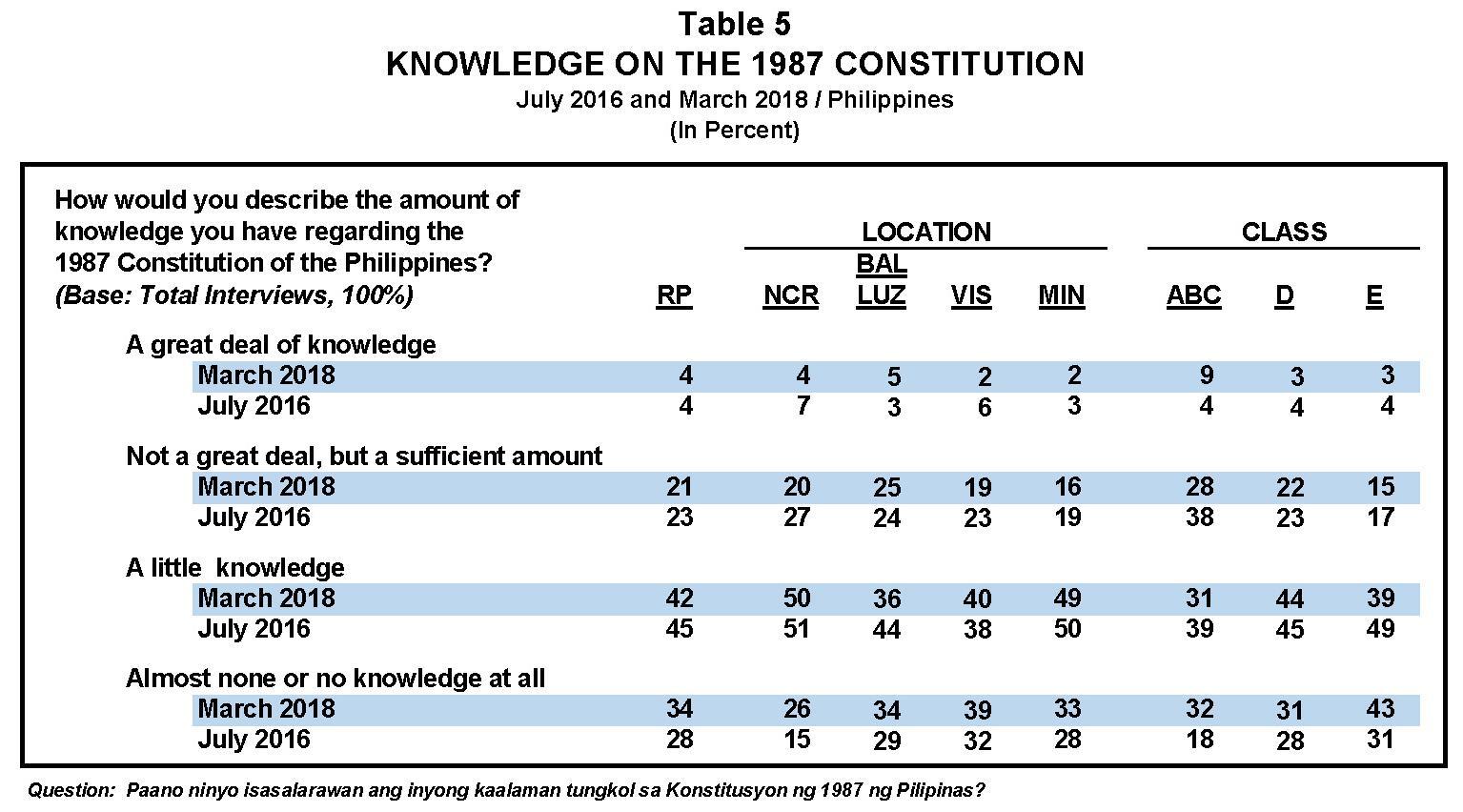 A big majority of Filipinos (71%) know little/almost none/nothing at all about the federal system of government that is being proposed by several government officials and various private groups and individuals. Of this figure (71%), 43% have little knowledge while 27% have almost no/no knowledge at all about the proposed system of government. Lack or absence of awareness is reported by most Filipinos across geographic areas and socio-economic classes (62% to 79% and 64% to 75%, respectively). Big pluralities in most geographic areas and all socio-economic groupings (41% to 45% and 42% to 50%, respectively) have little knowledge while nearly the same percentages in the rest of Luzon  have either little or almost no/no knowledge at all about the proposed federal system (45% versus 34%). (Please refer to Table 6.)

The prevailing sentiment among Filipinos is one of opposition to replacing the present unitary system of government with a federal one (66%). Majority levels of opposition are posted in each geographic area and socio-economic class (54% to 75% and 60% to 71%, respectively). More specifically, 36% of Filipinos are against changing the system of government regardless of the timing of such change while 30% are opposed to changing it now but may be open to it sometime in the future. Sizeable to big pluralities in Metro Manila (34%) and Mindanao (40%) are against such a shift in the system of government, whether now or in the future. About the same percentages of those in the rest of Luzon, the Visayas, and all socio-economic groupings are either not in favor now but may be open to a shift sometime in the future (32% to 36% and 25% to 34%, respectively) or are completely opposed to changing the system of a federal one (28% to 39% and 35% to 37%, respectively). (Please refer to Table 7.)

The rest of Filipinos are either supportive of the change to a federal system (27%) or are ambivalent on the matter (6%). Levels of support range from 17% to 42% across geographic areas and from 25% to 36% in the different socio-economic classes. Support for federalism is more marked in Metro Manila, the Visayas, and Mindanao (33% to 42%) than in the rest of Luzon (17%). In the meantime, levels of indecision on the matter range from 2% to 9% and from 4% to 7%, across geographic areas and socio-economic groupings. 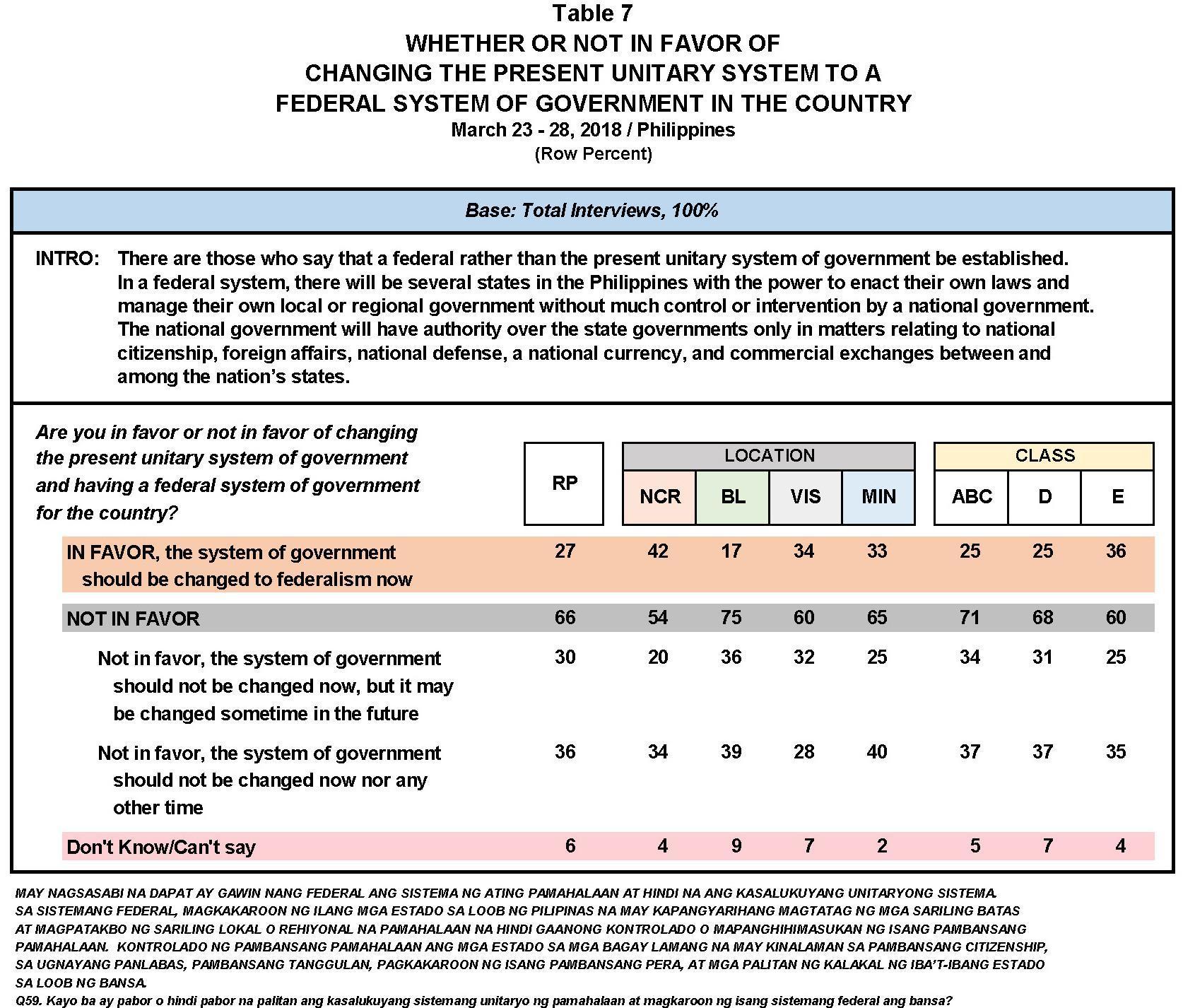