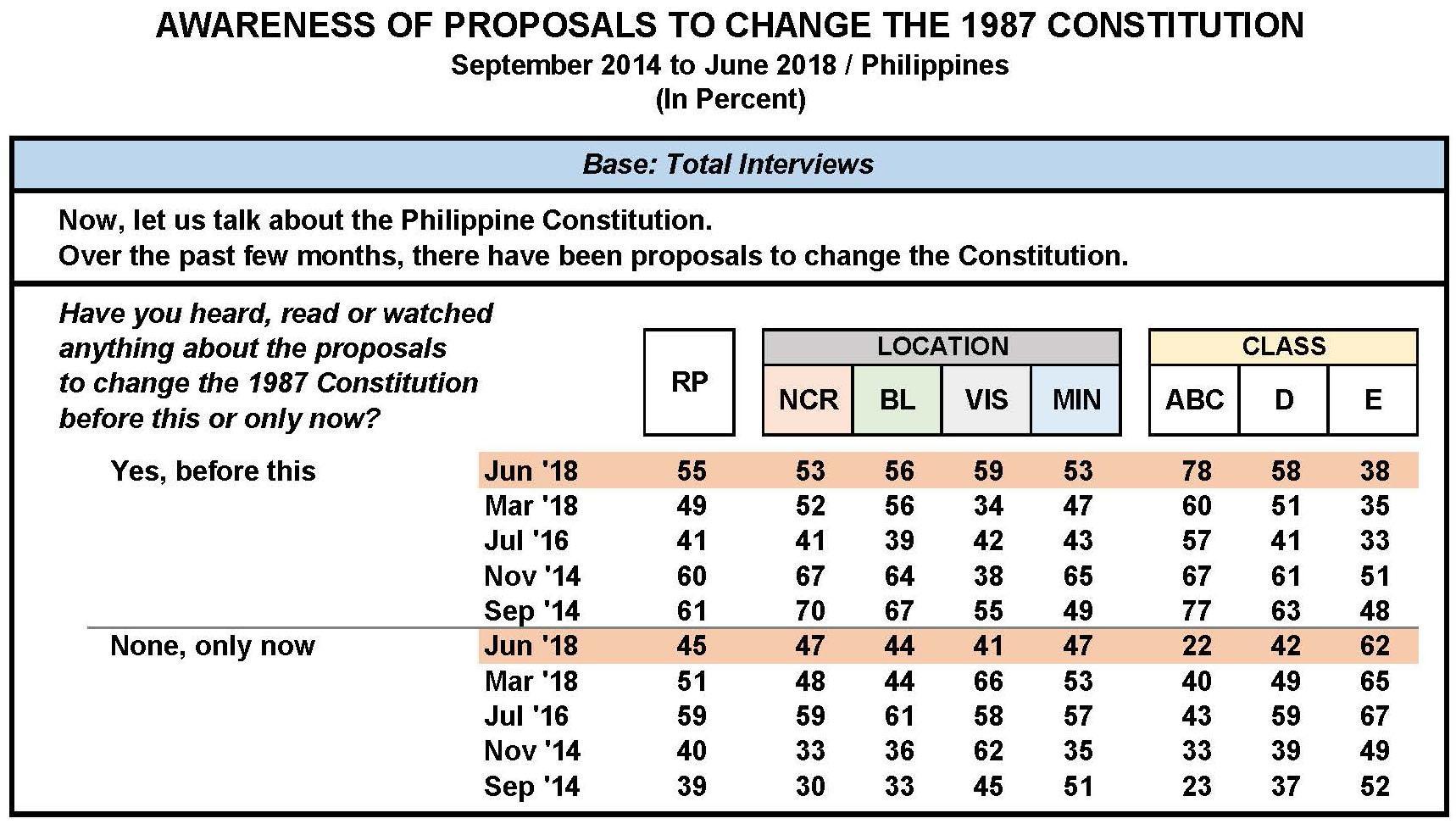 Pulse Asia Research, Inc. is pleased to share with you some findings on Charter Change from the June 2018 Ulat ng Bayan national survey. We request you to assist us in informing the public by disseminating this information.

Most Filipinos know about recent charter change proposals (55%) and admit having little/almost no/no knowledge at all about the 1987 Philippine Constitution (74%); while several changes in awareness figures occur between March and June 2018, levels of knowledge remain constant during this period

A small majority of Filipinos (55%) report awareness of proposals to change the country’s charter. This overall level of awareness is higher than the March 2018 figure (49%). Majority awareness figures are recorded in all geographic areas (53% to 59%) and practically every socio-economic class (58% to 78%), with Class E being the only exception (38%). Awareness of charter change proposals becomes more pronounced between March and June 2018 not only at the national level (+6 percentage points) but also in the Visayas (+25 percentage points), Class ABC (+18 percentage points), and Class D (+7 percentage points). (Please refer to Table 1.) 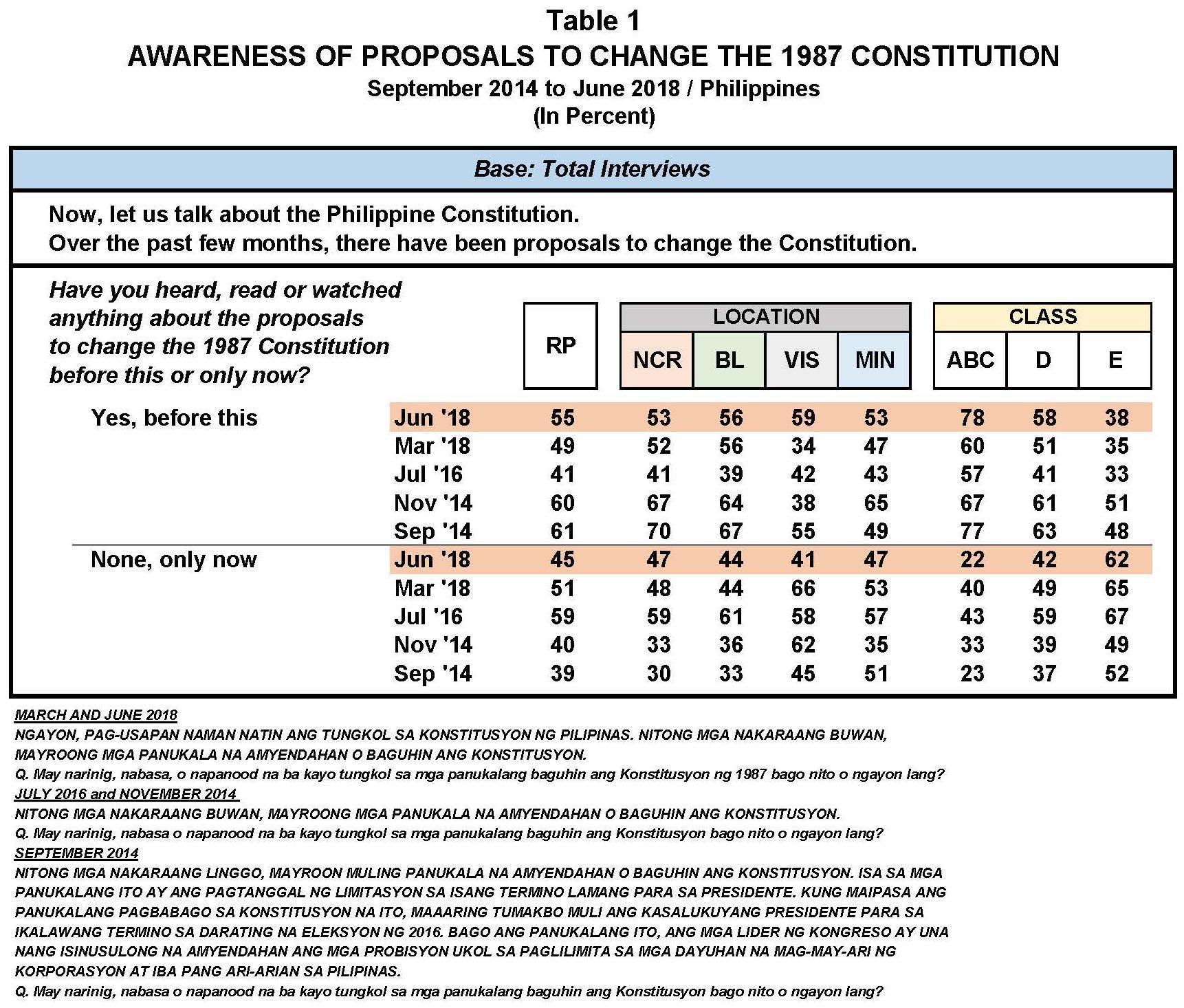 About three-quarters of Filipinos (74%) have little/almost no/no knowledge at all about the 1987 Philippine Constitution. The same is admitted by majorities across geographic areas and socio-economic groupings (68% to 83% and 54% to 83%, respectively). Of the total figure (74%), 43% have little knowledge while 31% know practically/completely nothing about the charter. In contrast, among those with at least enough knowledge (26%), 5% know a great deal while 21% have a sufficient amount of knowledge. Between March and June 2018, knowledge levels are essentially unchanged in the Philippines as a whole and in the various geographic areas and socio-economic classes. (Please refer to Tables 2 to 3.) 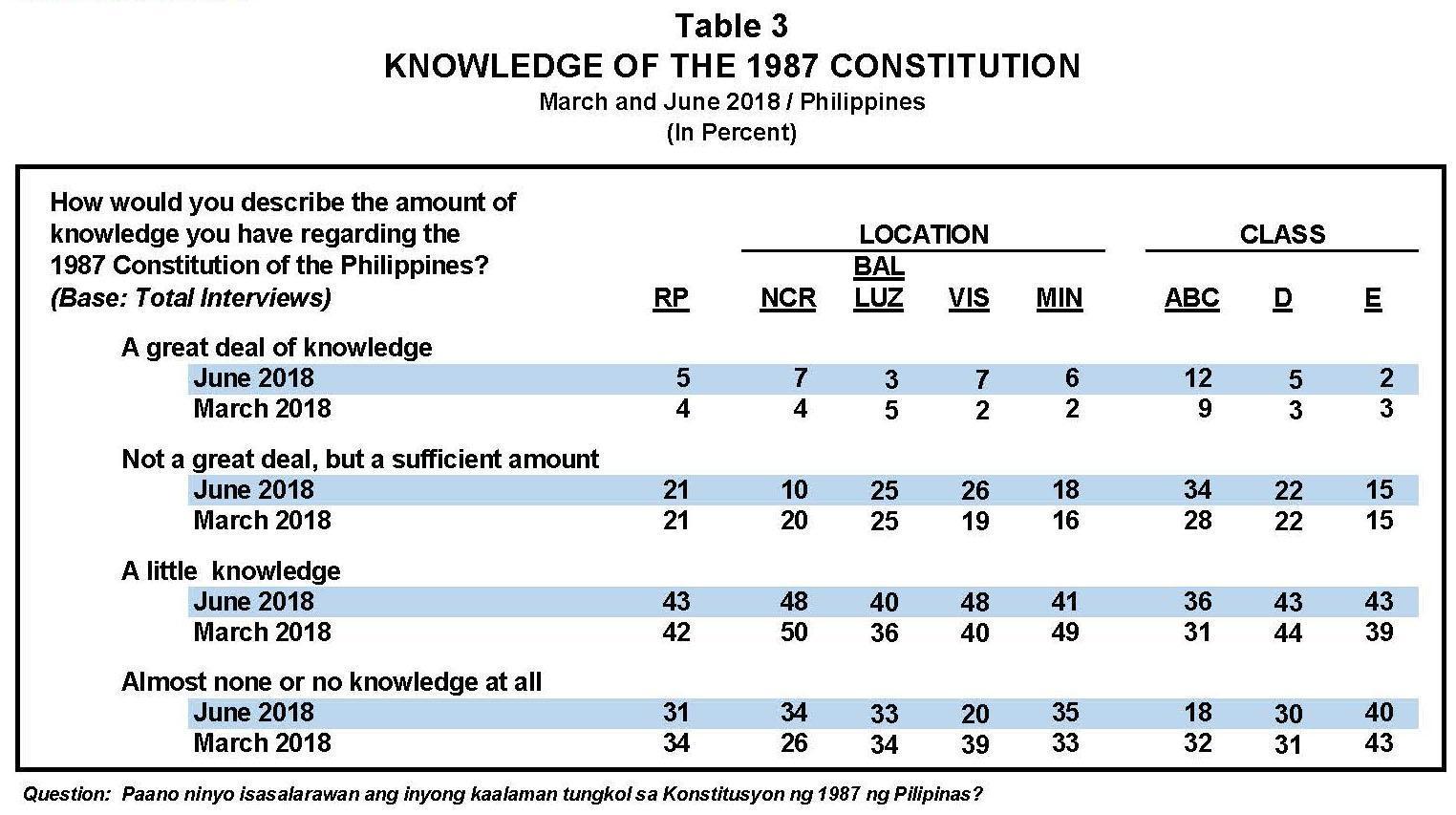 Around two (2) in three (3) Filipinos (67%) are against changing the country’s charter now. Among them, 37% oppose changing the 1987 Philippine Constitution now and in the future while 30% are against it at present but may be open to it sometime in the future. The rest of Filipinos either support charter change now (18%) or express indecision on the matter (14%). Public opinion on this issue is virtually the same in March and June 2018. During the period March to June 2018, the overall level of support for charter change now declines (-5 percentage points) while public opposition against it now and in the future becomes more notable (+5 percentage points). (Please refer to Tables 4 to 5.) 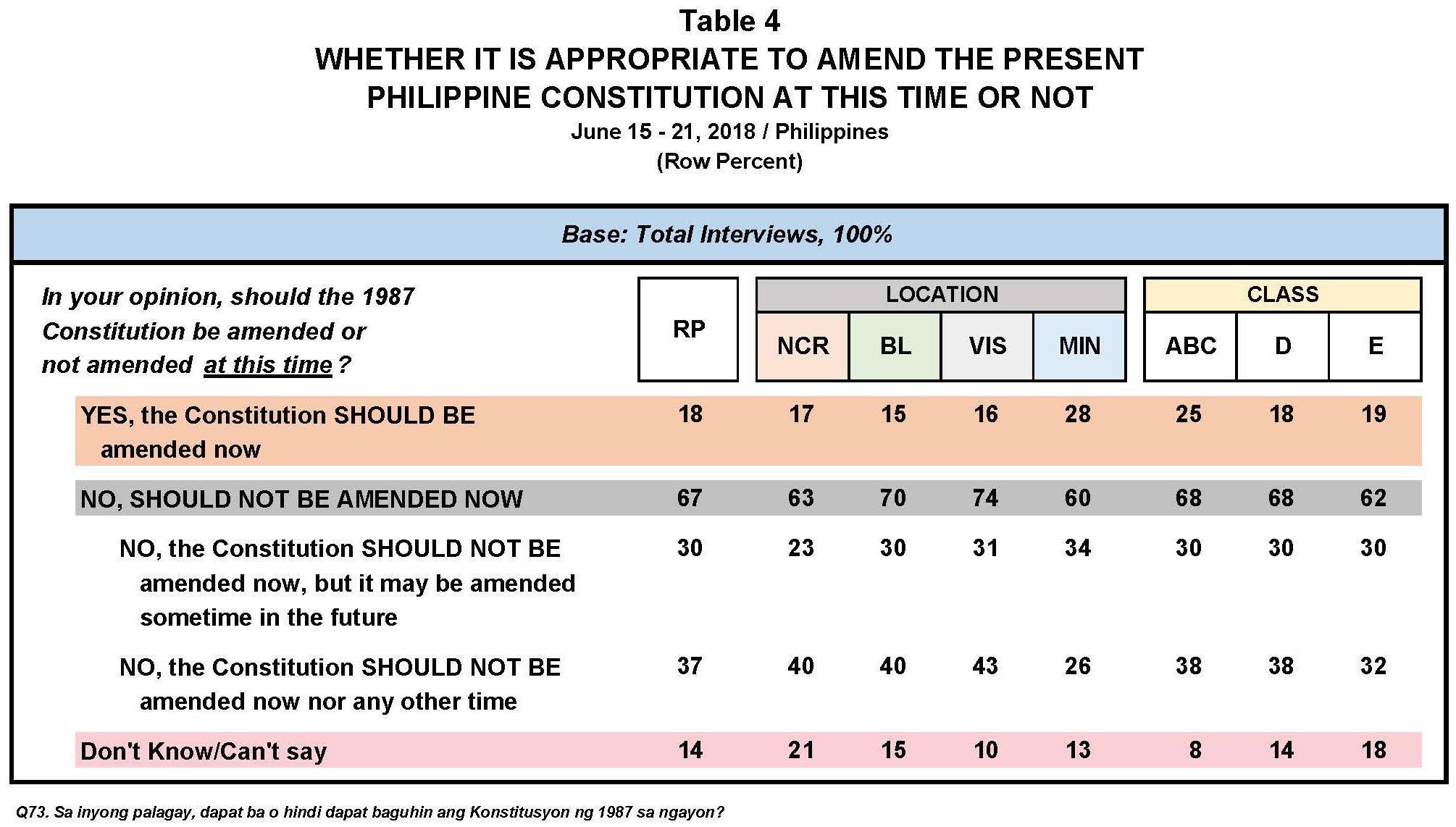 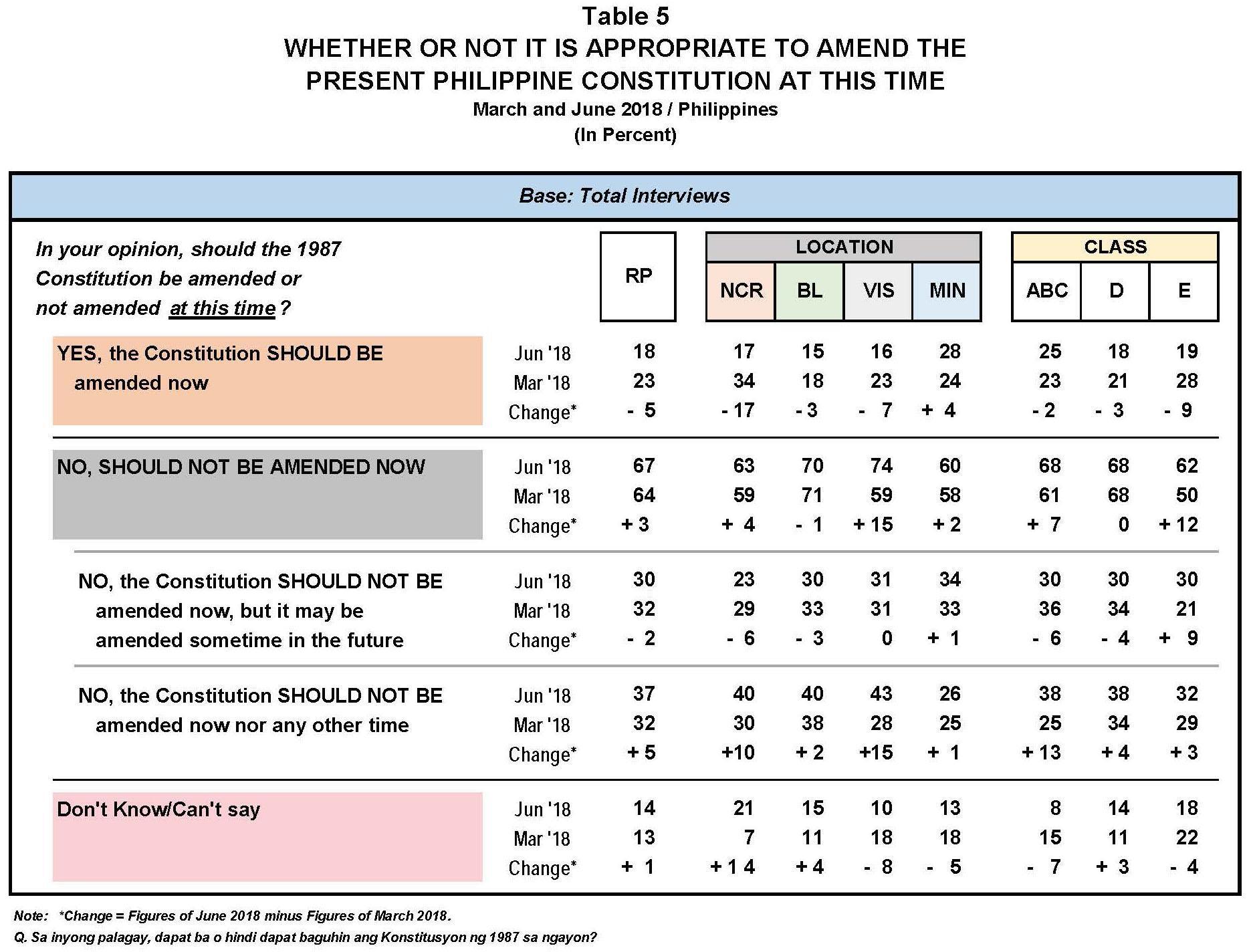 Little awareness of the proposed federal system of government is admitted by most Filipinos (69%); awareness figures are virtually unchanged between March and June 2018

Almost seven (7) out of 10 Filipinos (69%) have at best a low level of knowledge about the federal system of government that is being proposed by charter change advocates. Majorities across geographic areas and socio-economic classes know little/almost nothing/nothing at all about the alternative system of government that is being proposed to replace the current unitary system (60% to 77% and 54% to 79%, respectively). Of the total figure (69%), 43% know little about the proposed federal system while 27% know almost nothing/nothing at all about it. In contrast, 31% of Filipinos know at least enough about the latter, with 8% having much knowledge about it and 22% knowing enough. From March to June 2018, the only significant change is the increase in the percentage of Metro Manilans with little/almost no/no knowledge at all about the proposed federal system (+15 percentage points) and the consequent decline in the percentage of Metro Manilans with at least enough knowledge about it (-15 percentage points). (Please refer to Table 6.) 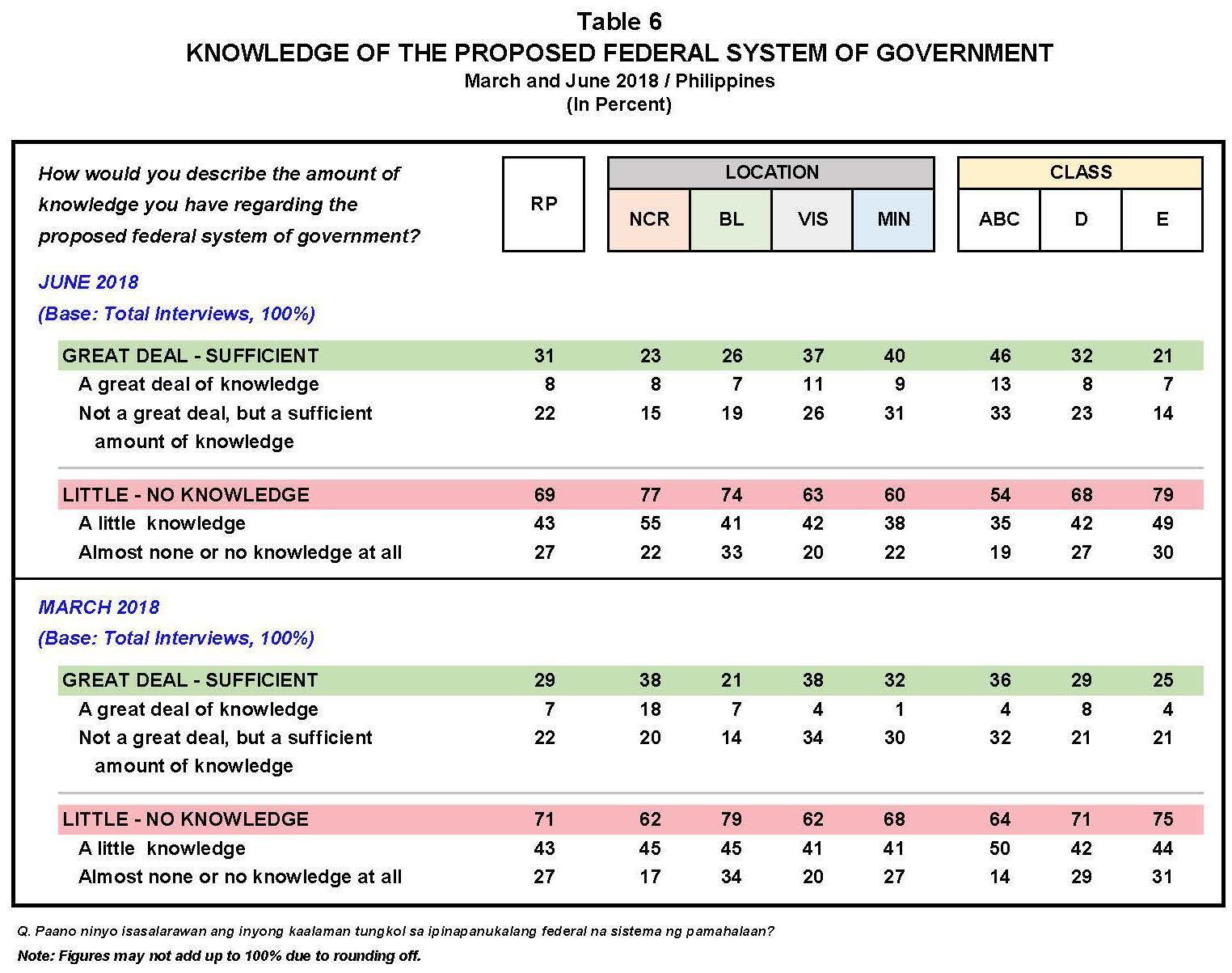 A shift to a federal system of government is rejected by most Filipinos (62%); public opinion on this matter remains constant over the past quarter

The majority of Filipinos (62%) are not in favor of changing the system of government in the country to a federal one, with 34% opposing it now and in the future and 28% being against it now but may be open to it in the future. With the exception of Mindanao (45%), majority levels of opposition to federalism now are recorded across geographic areas and socio-economic classes (56% to 72% and 54% to 68%, respectively). Meanwhile, 28% of Filipinos are supportive of a shift to a federal form of government now and ambivalence on the matter is expressed by 10% of Filipinos. (Please refer to Table 7.) 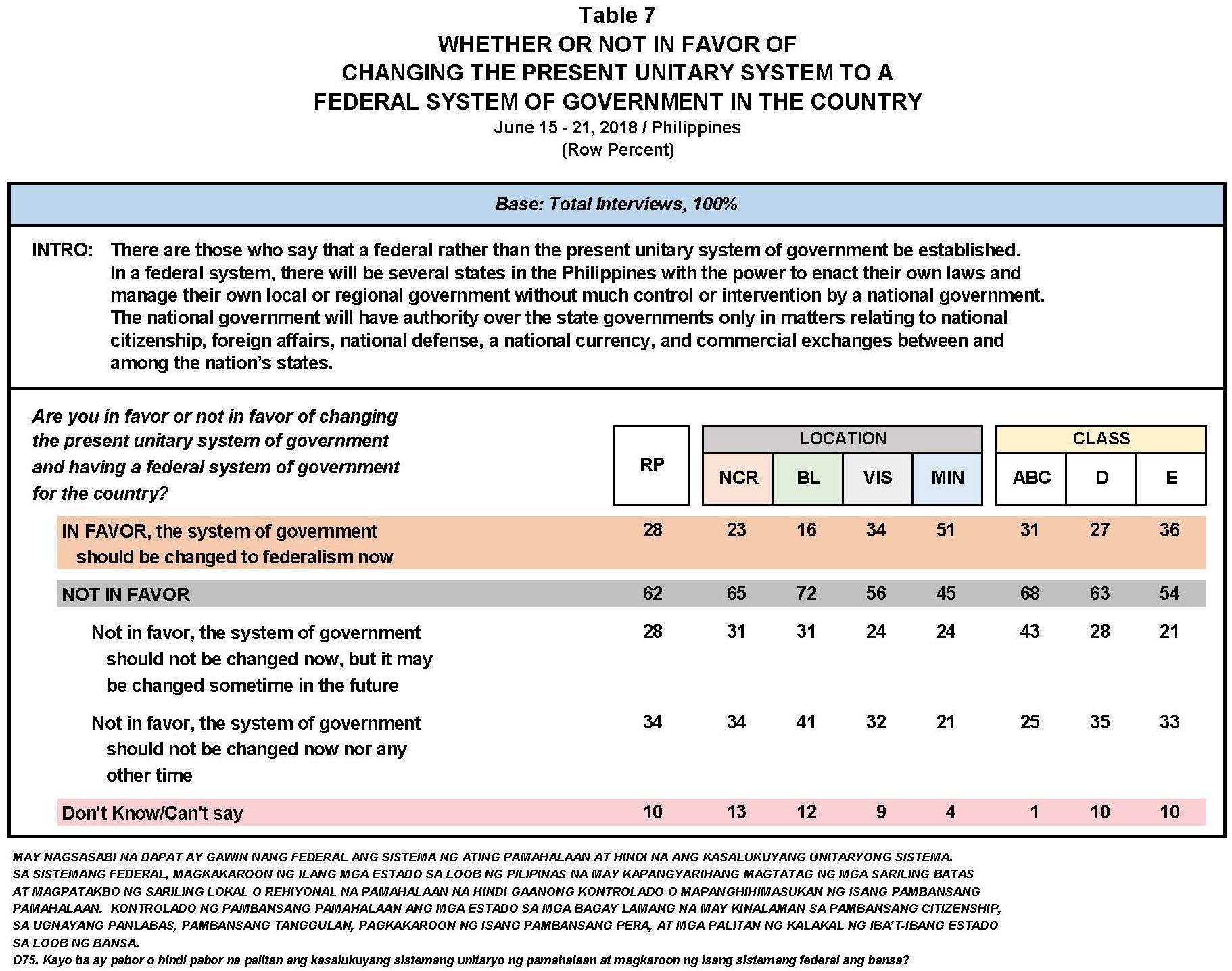 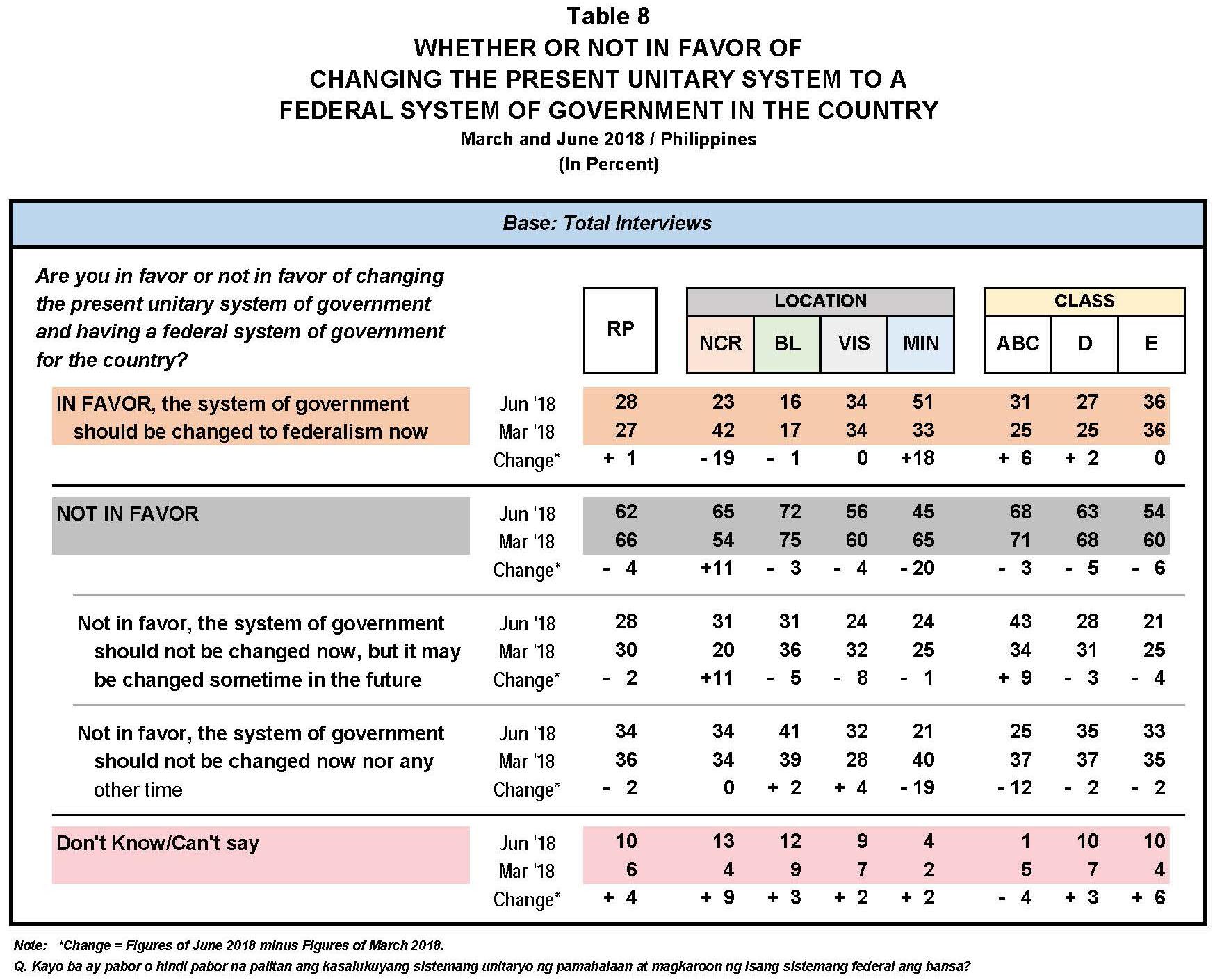