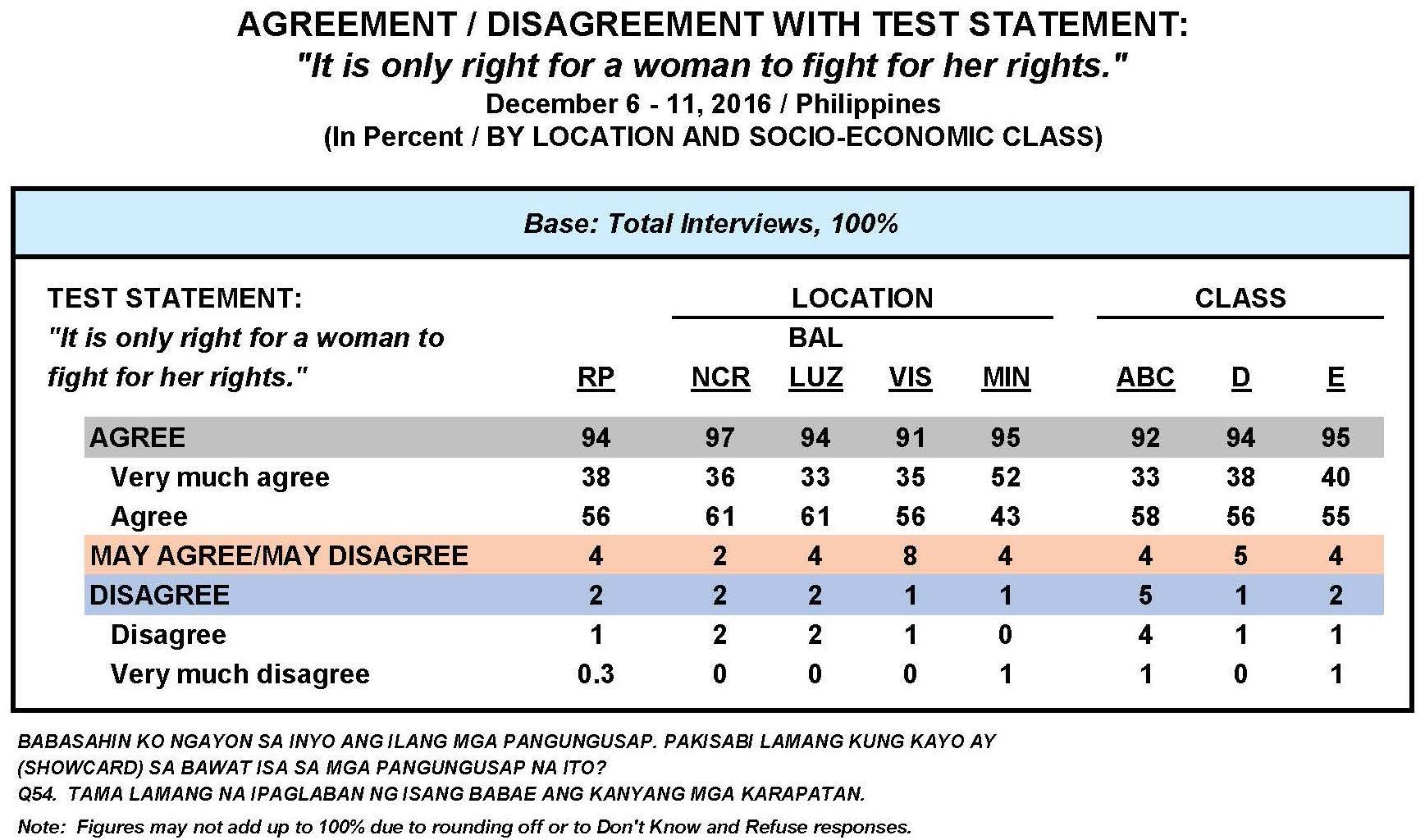 By pulseasia 5 years ago

Pulse Asia Research, Inc. is pleased to share with you some findings on Women’s Rights and the Status of Women in Philippine Society from the December 2016 Ulat ng Bayan national survey. We request you to assist us in informing the public by disseminating this information.

In December 2016, virtually every Filipino (94%) is of the view that it is only right for a woman to fight for her rights. This opinion is expressed by practically all Filipinos across geographic areas (91% to 97%), socio-economic classes (92% to 95%), and levels of educational attainment (92% to 96%), as well as among both males and females (93% to 95%). Disagreement with this view and indecision on the matter are essentially non-existent not only at the national level (2% and 4%, respectively) but also across these selected survey subgroupings (almost nil to 5% and 1% to 8%, respectively). (Please refer to Tables 1 and 2.) 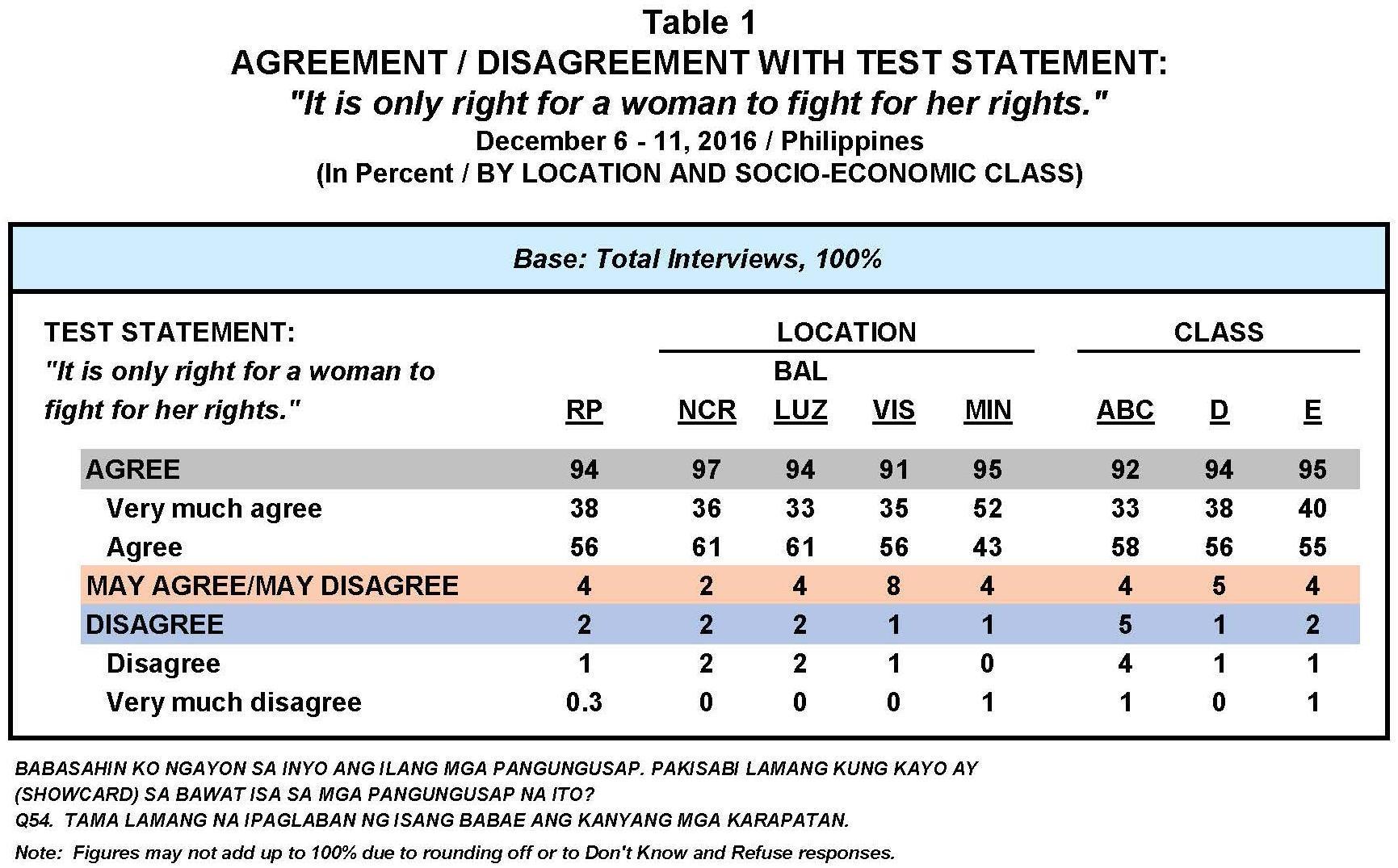 For a sizeable plurality of Filipinos (41%), most women in the country are not disadvantaged

The plurality sentiment among Filipinos (41%) is that most women in Philippine society may be said to be on equal footing with their male counterparts. Near majorities in Metro Manila (50%), Mindanao (48%), and among those who have at least completed vocational schooling (47% to 48%) echo this view. Furthermore, Metro Manilans and Mindanaoans are more inclined to share this opinion than those in the rest of Luzon and the Visayas (48% to 50% versus 35% to 37%). Similarly, those with more exposure to formal schooling are more likely to support this view of Philippine society than those with less exposure (47% to 48% among those with at least a vocational school diploma versus 29% to 34% among those with at best some high school education). (Please refer to Tables 3 and 4.)

On the other hand, 33% of Filipinos agree that there is gender inequality in the country, with women being at a disadvantage. Agreement is more marked in the rest of Luzon and the Visayas compared to Metro Manila and Mindanao (40% to 42% versus 18% to 21%) as well as among those with lower levels of educational attainment than those with higher levels (37% to 40% among those with at most some high school education versus 26% to 27% among those with at least some college units). It may also be noted that a slightly higher obtains among females than males (36% versus 30%).

About a quarter of Filipinos (26%) are ambivalent on the matter. Levels of indecision range from 23% to 32% across geographic area, from 22% to 28% in the different socio-economic classes, and from 20% to 31% across levels of educational attainment. Almost the same indecision levels are posted among males and females (28% versus 24%). 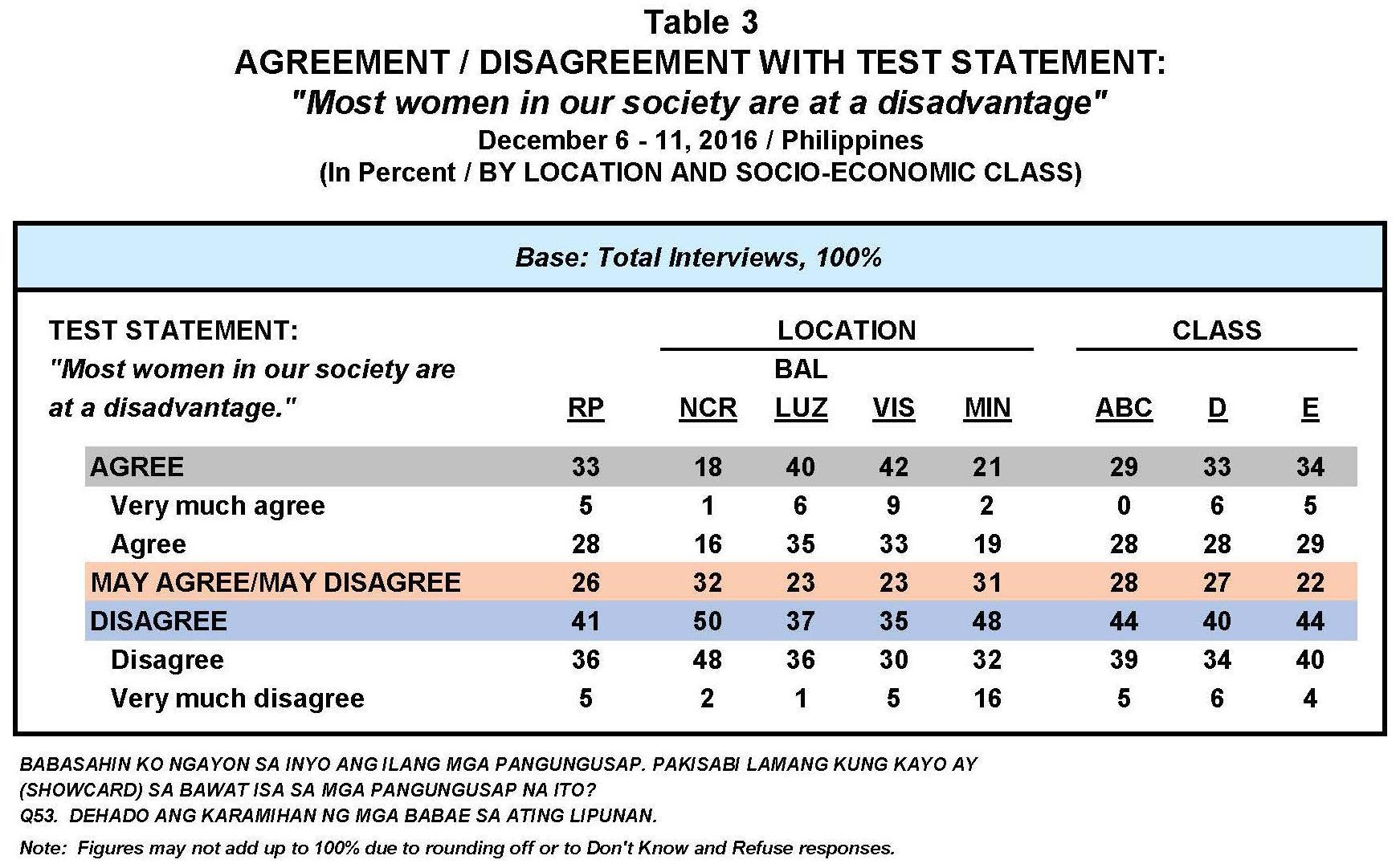