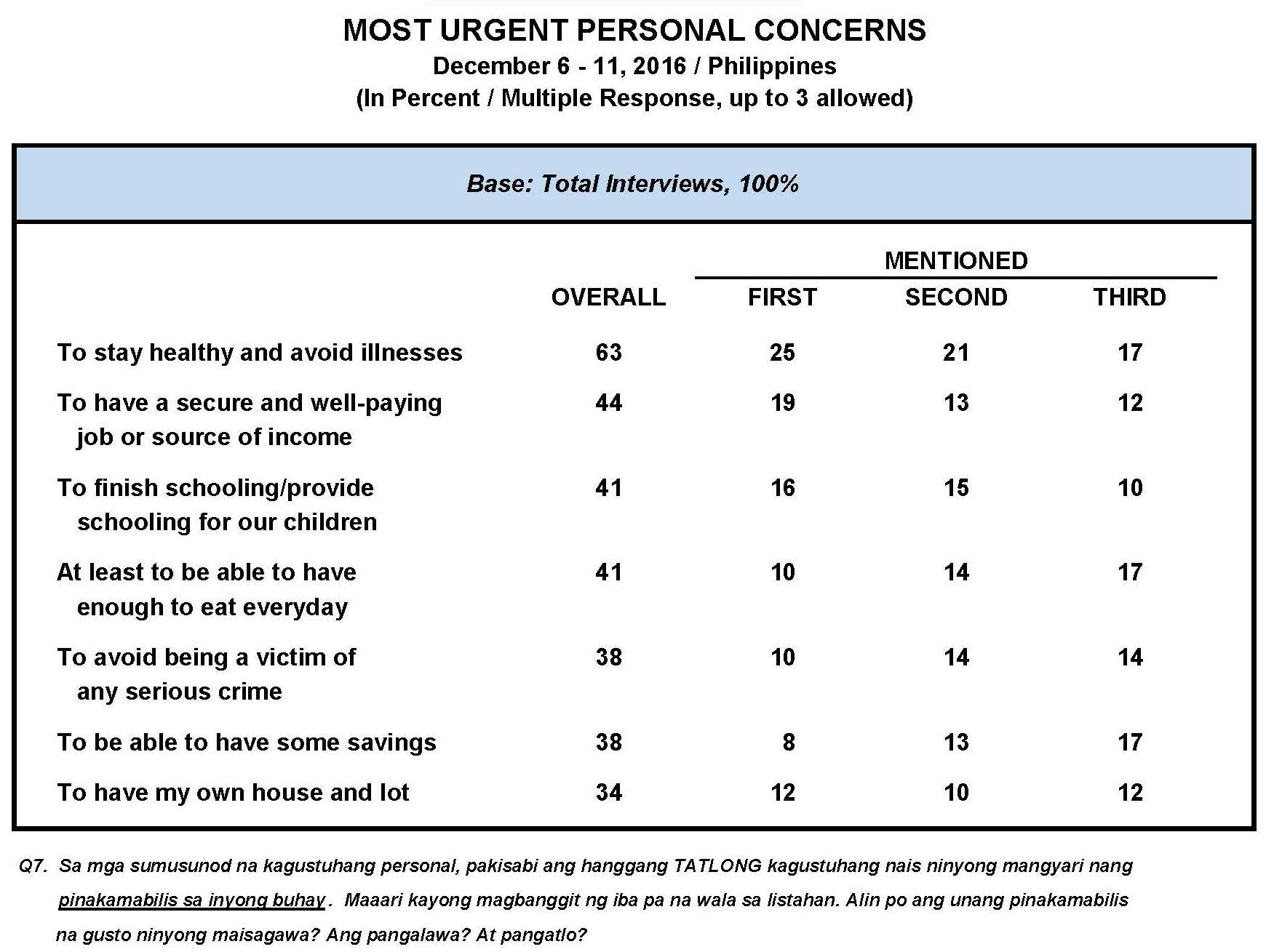 Pulse Asia Research, Inc. is pleased to share with you some findings on Urgent Personal and National Concerns and National Administration Performance Ratings from the December 2016 Ulat ng Bayan national survey. We request you to assist us in informing the public by disseminating this information.

A sizeable majority of Filipinos (63%) cites staying healthy and avoiding illnesses as their most urgent concern at the personal level. This is the only majority personal concern in December 2016. A second cluster of urgent personal concerns of Filipinos includes having a secure and well-paying job (44%), finishing schooling or providing schooling for one’s children (41%), and having enough to eat on a daily basis (41%). Meanwhile, avoiding being a crime victim (38%), having some savings (38%), and having a house and lot (34%) comprise a third and last set of personal concerns deemed urgent by Filipinos. Year-on-year, the only significant changes in public opinion on this matter are the increase in the level of concern about crime victimization (+8 percentage points) and the decline in the level of concern about schooling (-7 percentage points). (Please refer to Tables 1 and 2.) 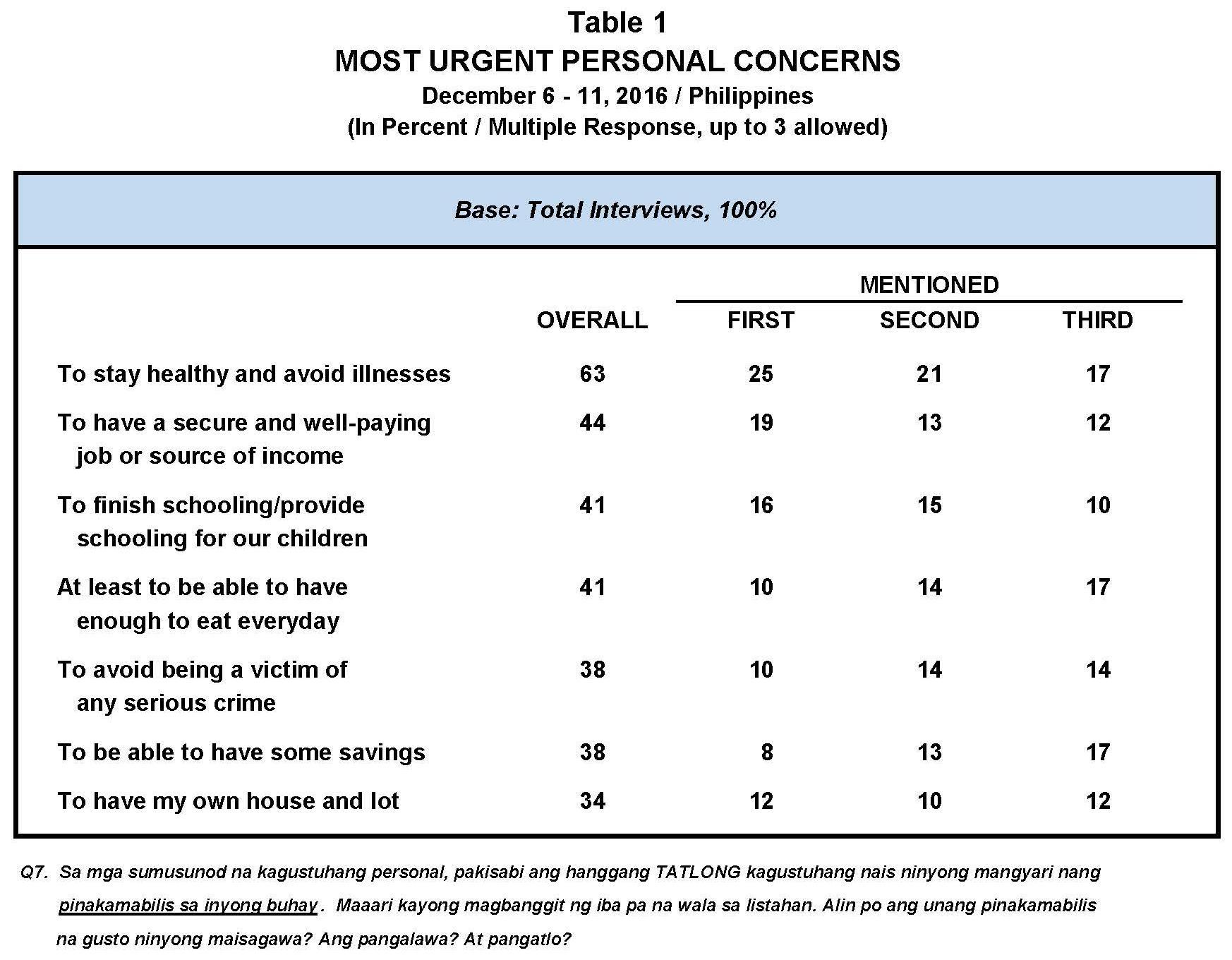 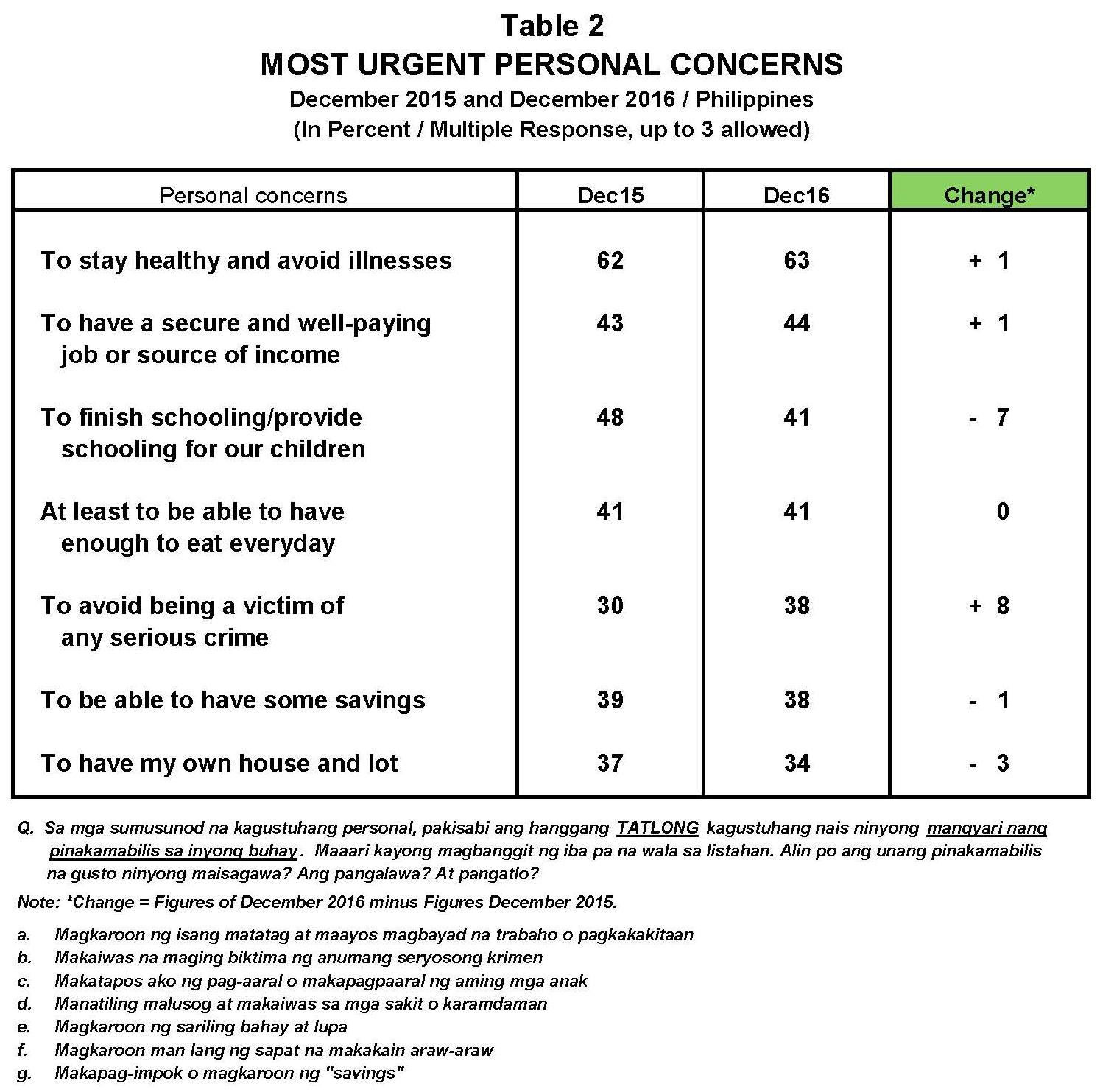 The only personal concern identified as urgent by majorities across geographic areas and socio-economic classes is health (54% to 68% and 58% to 67%, respectively). There are only two (2) other urgent personal concerns in the other subgroupings – schooling (51% in the Visayas and Mindanao) and crime victimization (55% in Class ABC).  On the other hand, Metro Manilans are least concerned about personal food security (26% while those in the rest of Luzon are least concerned about having their own house and lot (27%). The least often mentioned urgent personal concerns in the Visayas are having some savings (31%) and having their own house and lot (34%) and in Mindanao, these are crime victimization (35%) and personal savings (37%). (Please refer to Table 3.) 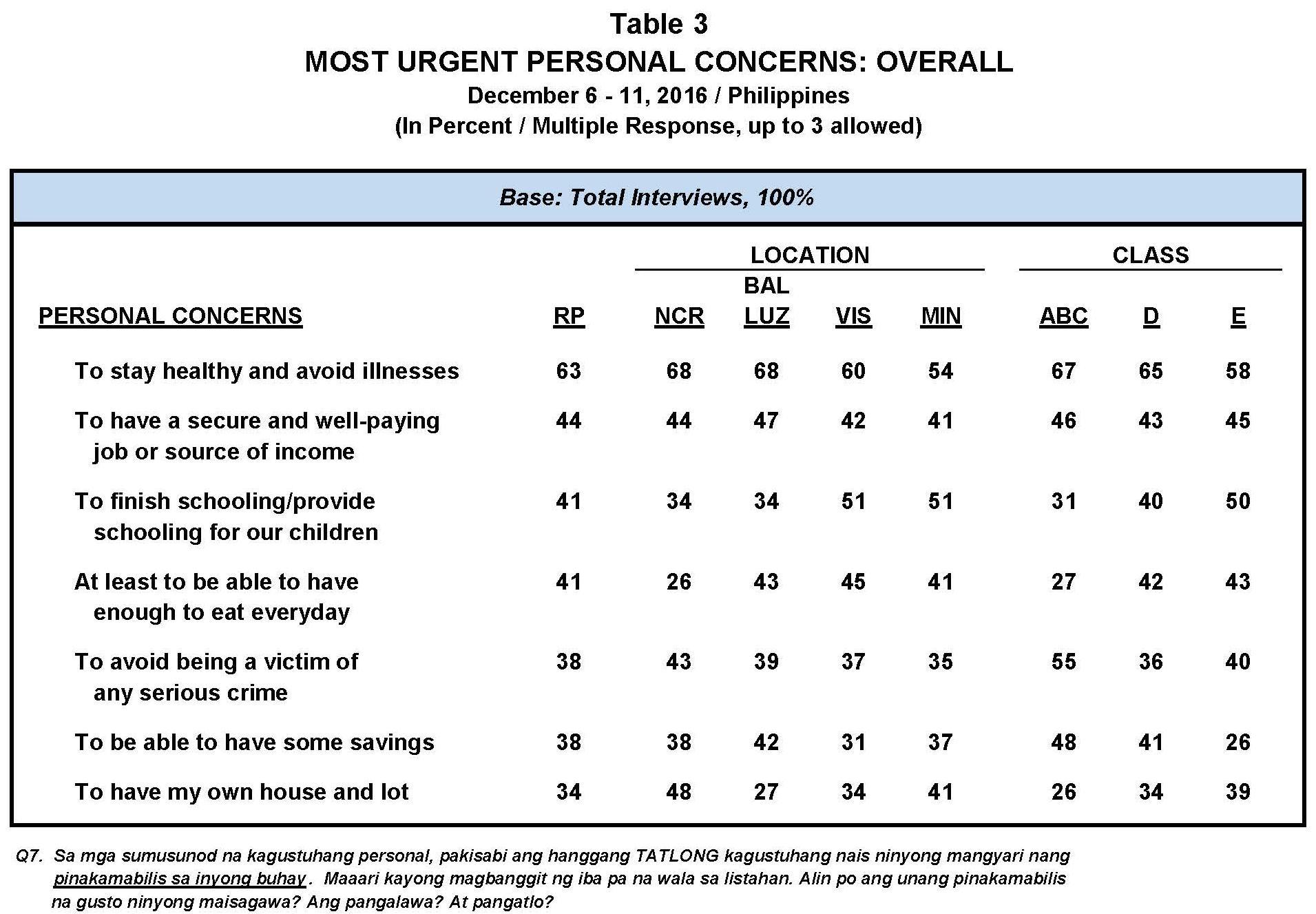 The leading urgent national concern is the need to increase workers’ pay (45%); figures recorded in September and December 2016 do not differ significantly

As far as national issues are concerned, not one of the 15 issues included in this probe is deemed urgent by most Filipinos. The most often mentioned urgent national concern in December 2016 is the need to increase workers’ pay (45%). Five (5) issues make up a second set of urgent national concerns – controlling inflation (34%), reducing poverty (33%), fighting criminality (33%), creating more jobs (31%), and fighting corruption (31%). A second cluster of urgent national concerns includes peace promotion (23%) and enforcement of the rule of law (17%) while a third group includes reducing the amount of taxes paid by Filipinos (12%), stopping the destruction and abuse of the environment (11%), protecting the welfare of overseas Filipino workers (10%), controlling population growth (8%), and defending the integrity of Philippine territory (6%). Filipinos are least concerned as regards charter change and terrorism (both at 4%). During the period September to December 2016, the only notable movement in these figures is the 7-percentage point decrease in the level of concern about job creation. (Please refer to Tables 4 to 5.) 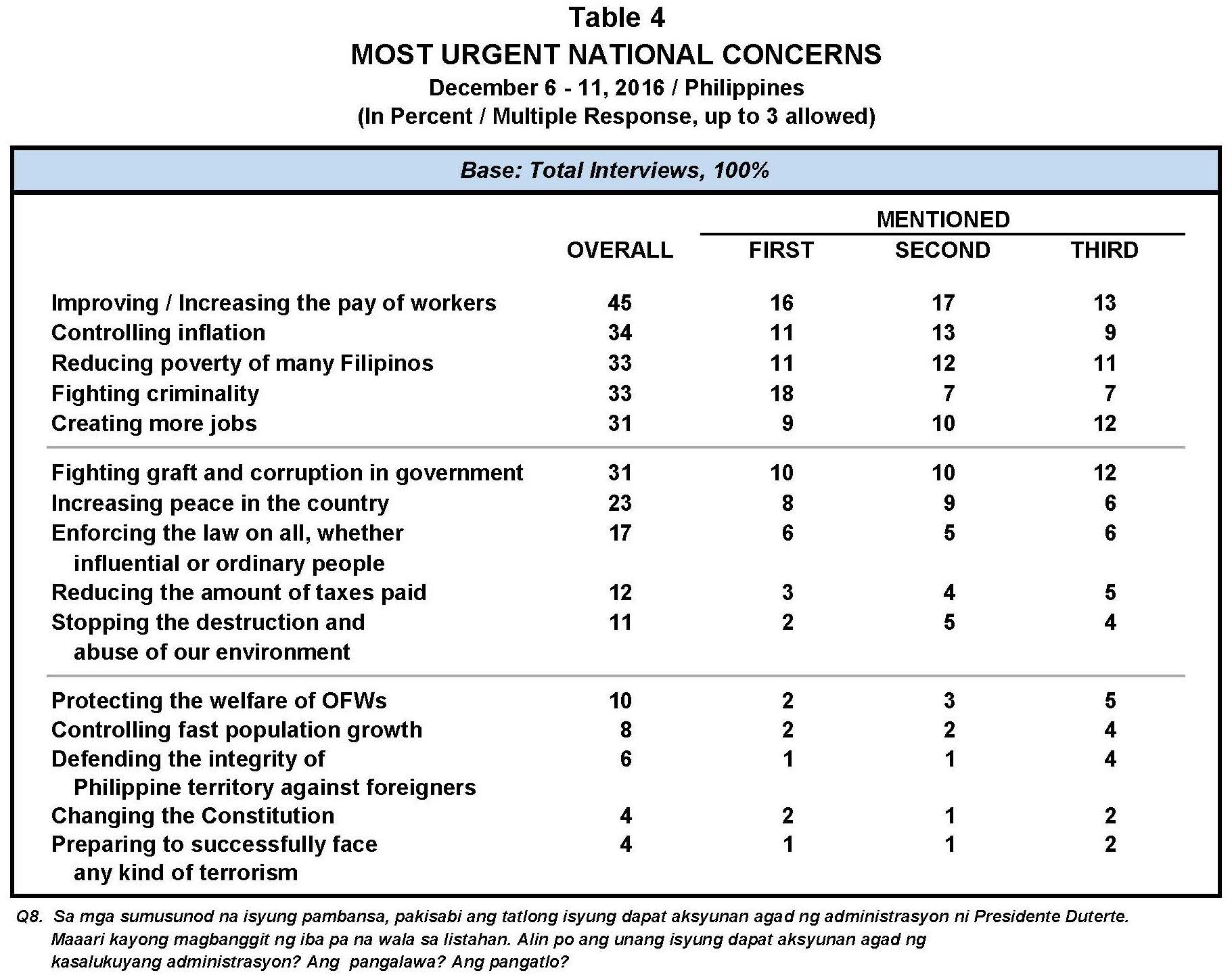 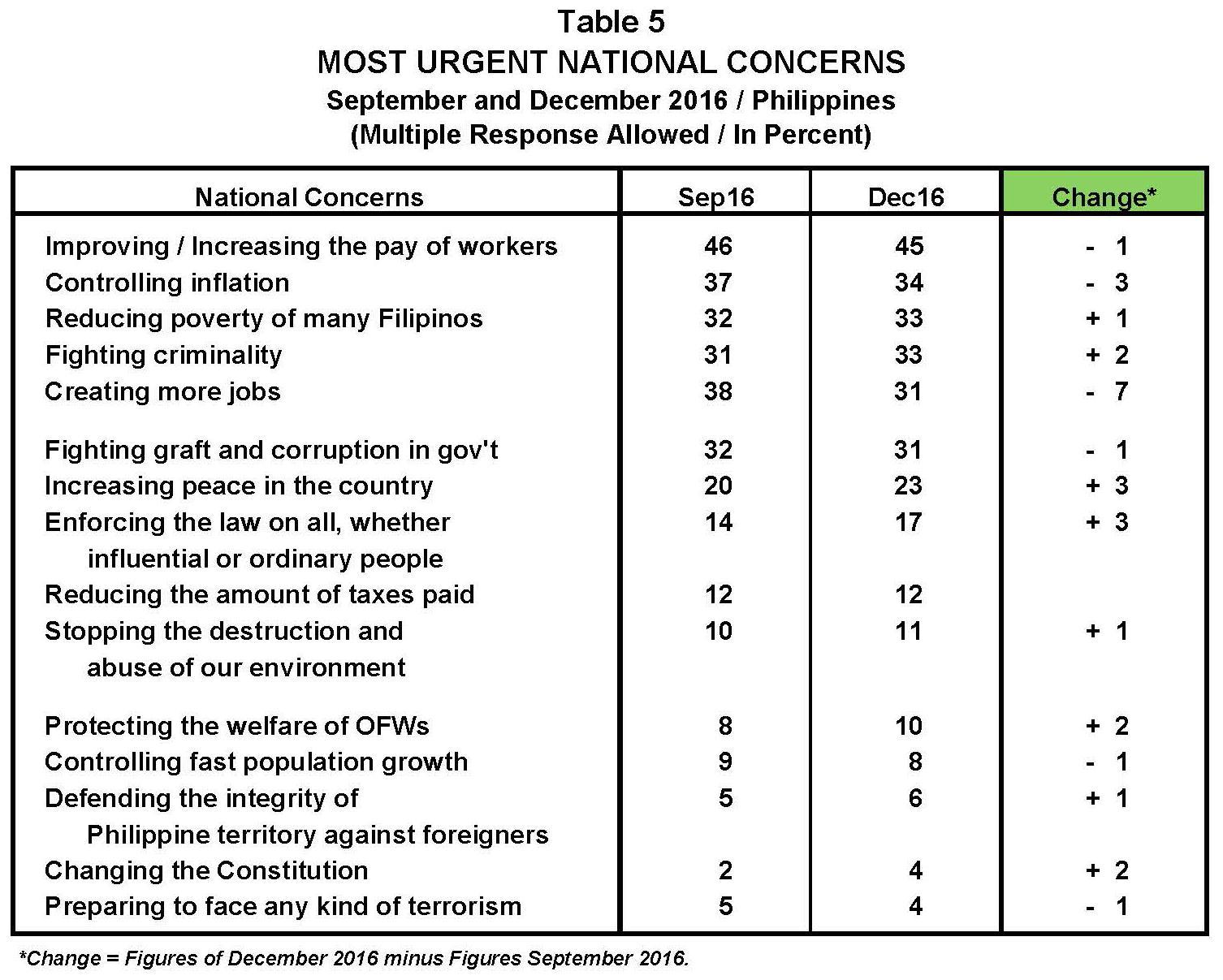 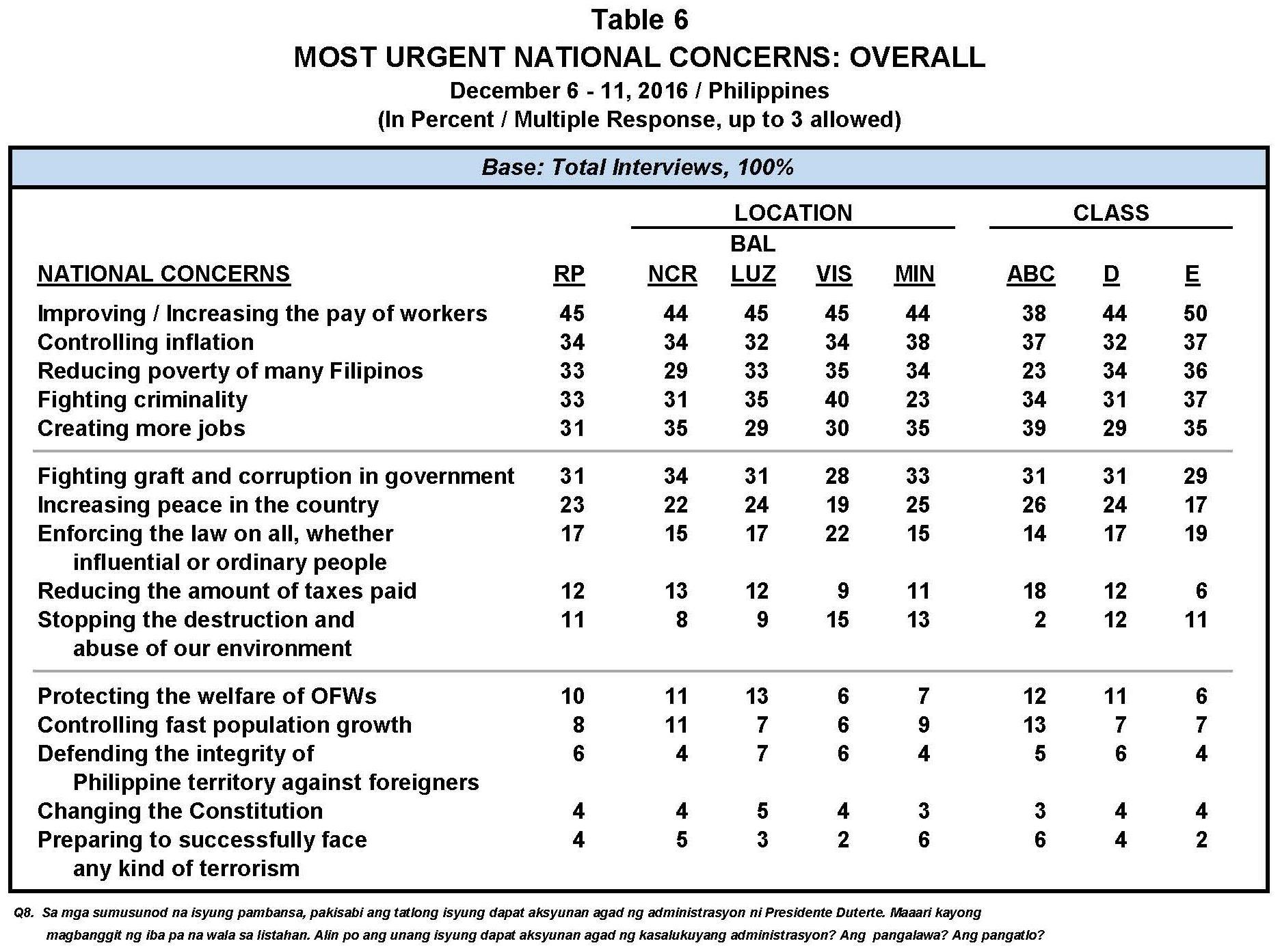 Most Filipinos are appreciative of the Duterte administration’s handling of 11 out of 12 issues included in this survey’s performance probe. These issues are criminality (84%), disaster response (80%), corruption (76%), OFW welfare (75%), peace (72%), environment (69%), rule of law (69%), territorial defense (65%), jobs (58%), workers’ pay (57%), and poverty (51%). It is only on the issue of controlling inflation – an issue considered urgent by 34% of Filipinos – on which the present dispensation fails to obtain a majority approval score (44%). Levels of disapproval for the present administration’s work range from 2% on the issue of responding to the needs of those affected by disasters to 20% on controlling inflation. Meanwhile, Filipinos are least ambivalent about the current dispensation’s efforts to fight criminality (12%) and are most undecided as regards its initiatives to control inflation (36%). (Please refer to Table 7.) 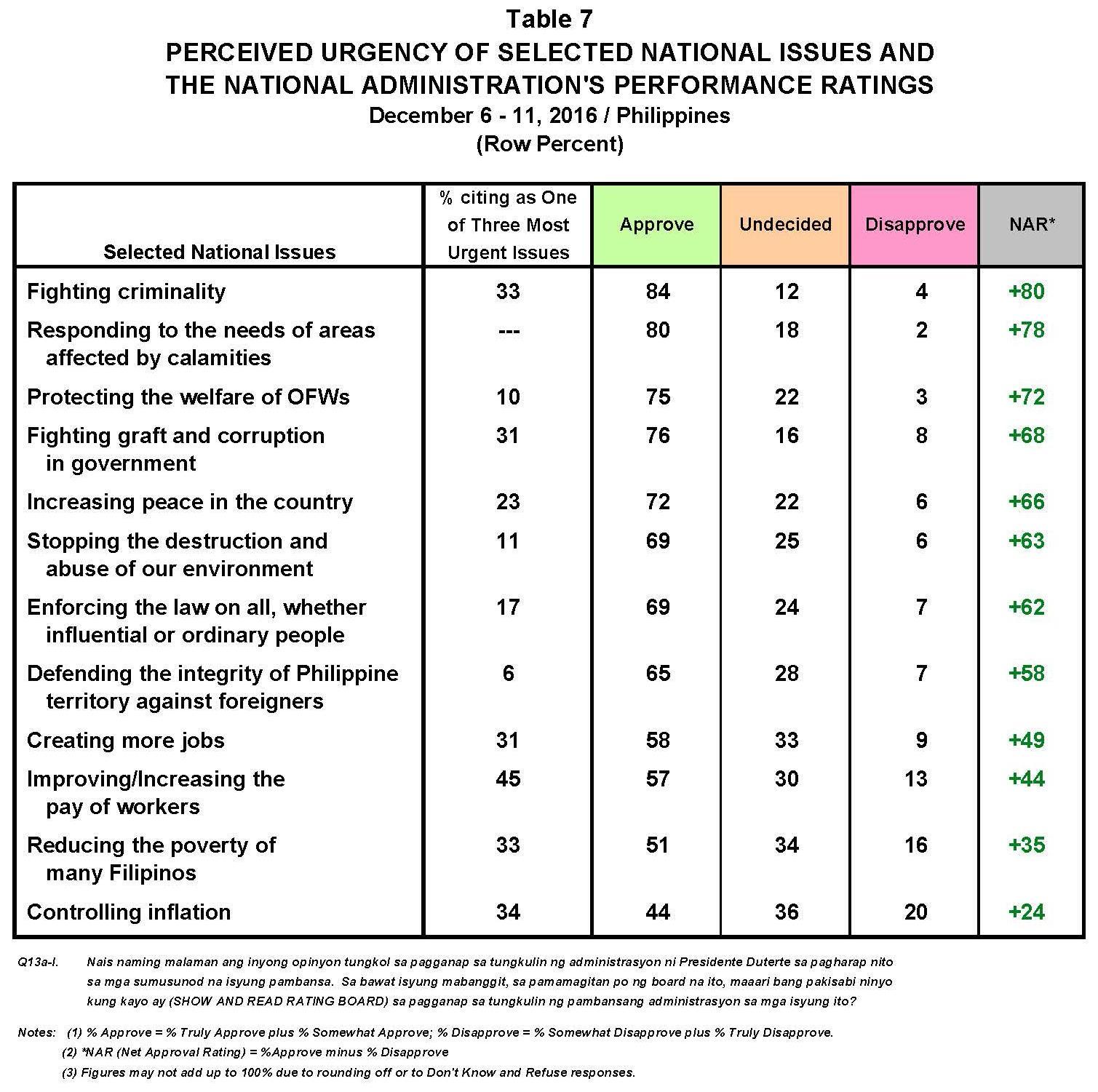 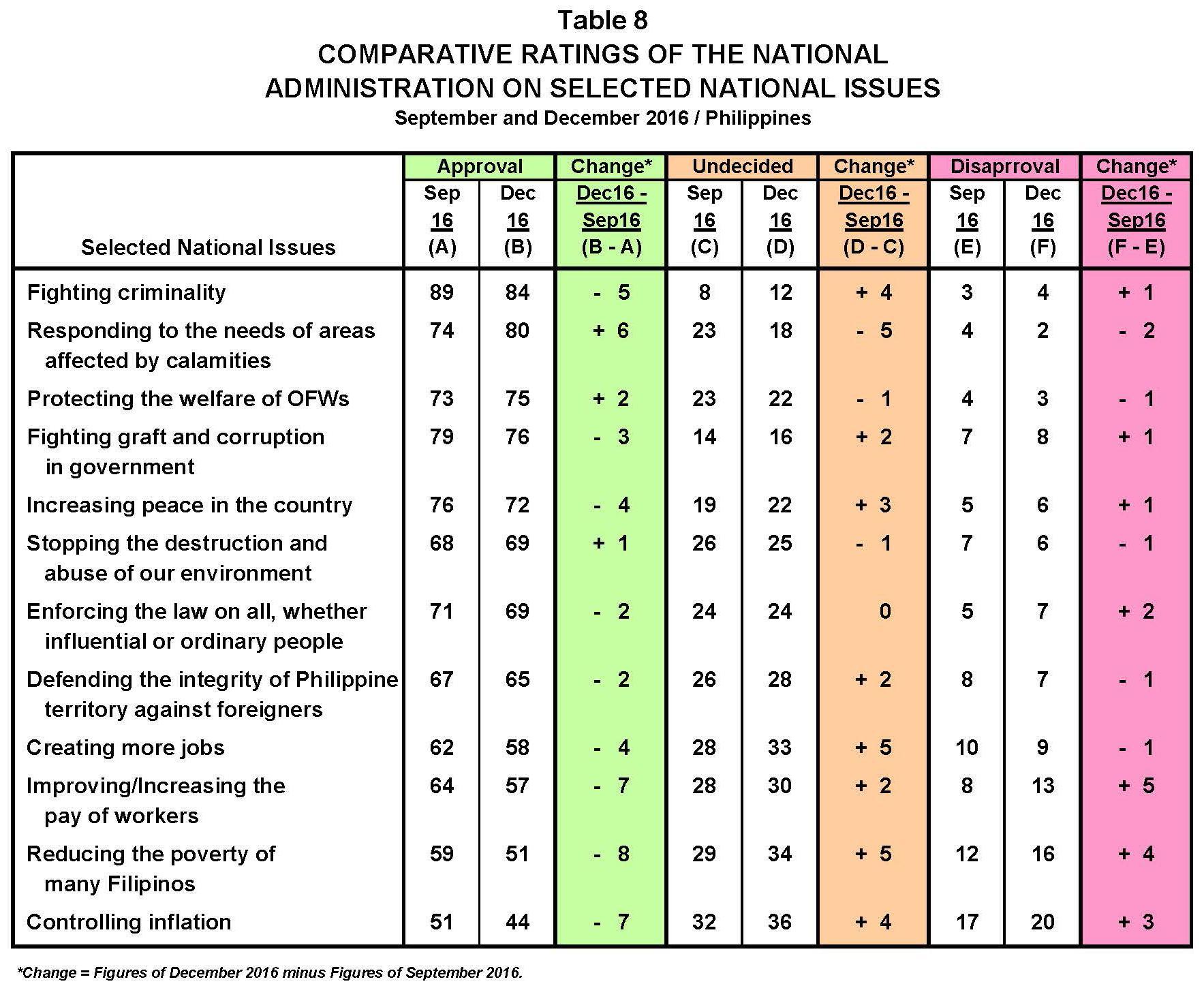