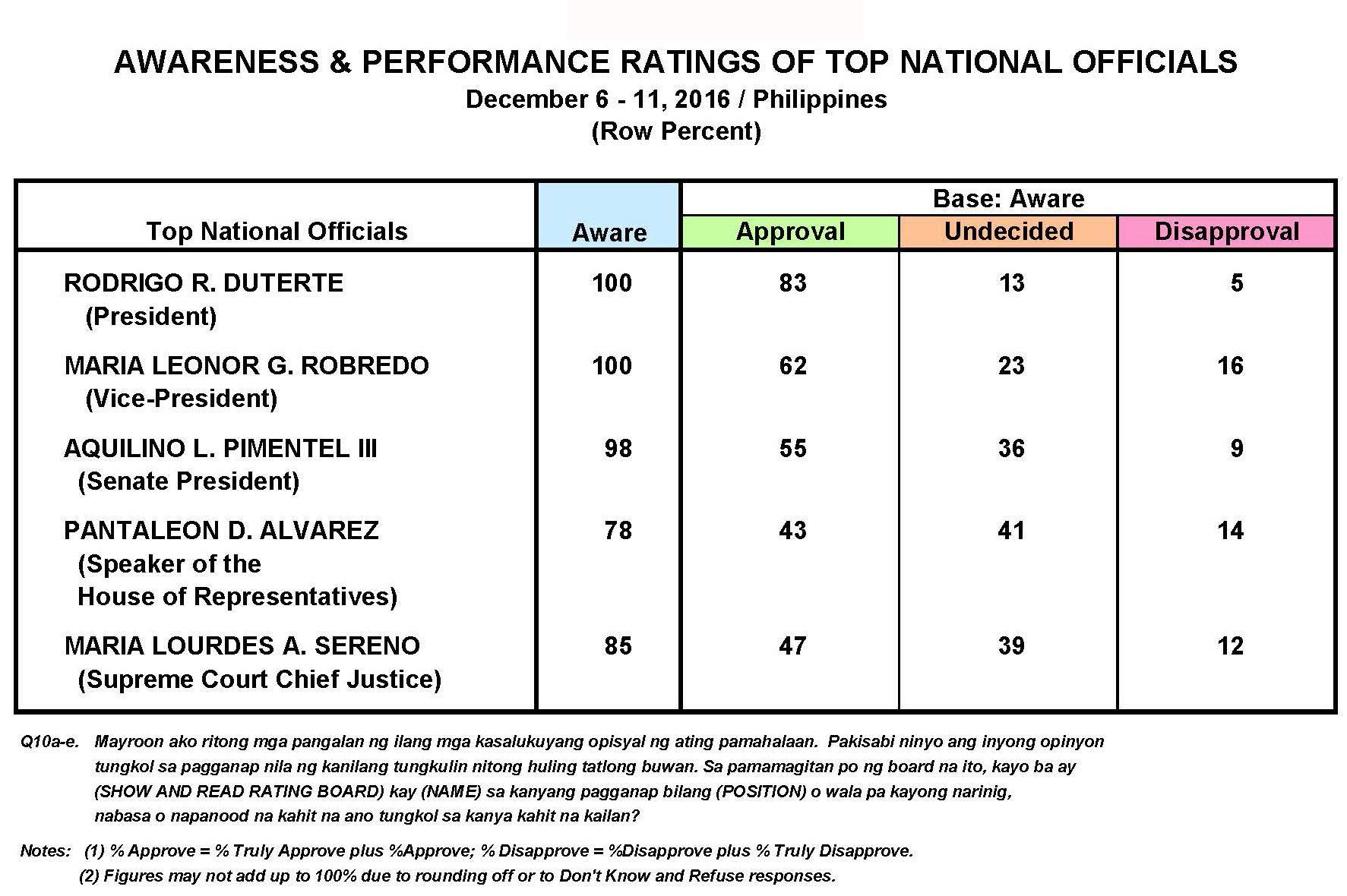 Pulse Asia Research, Inc. is pleased to share with you some findings on the Performance and Trust ratings of the Top National Government Officials and Key Government Institutions from the December 2016 Ulat ng Bayan national survey. We request you to assist us in informing the public by disseminating this information.

Most Filipinos express appreciation for the quarterly performance of President Rodrigo R. Duterte (83%), Vice-President Maria Leonor B. Robredo (62%), and Senate President Aquilino L. Pimentel III (55%). Approval is the plurality sentiment as regards the work done by Supreme Court Chief Justice Maria Lourdes A. Sereno (47%) while Speaker of the House of Representatives Pantaleon D. Alvarez records virtually the same approval and indecision figures (43% and 41%, respectively). Levels of disapproval for these officials’ performance range from 5% for President Duterte to 16% for Vice-President Robredo while their indecision figures vary from 13% for President Duterte to 41% for House Speaker Alvarez. Between September and December 2016, the only significant movement in these officials’ national performance ratings is the increase in the overall disapproval score of Vice-President Robredo (+7 percentage points). Across geographic areas and socio-economic classes, the only marked movement in these officials’ ratings is the drop in the approval rating of Senate President Pimentel in Class ABC (-25 percentage points). (Please refer to Tables 1 and 2.) 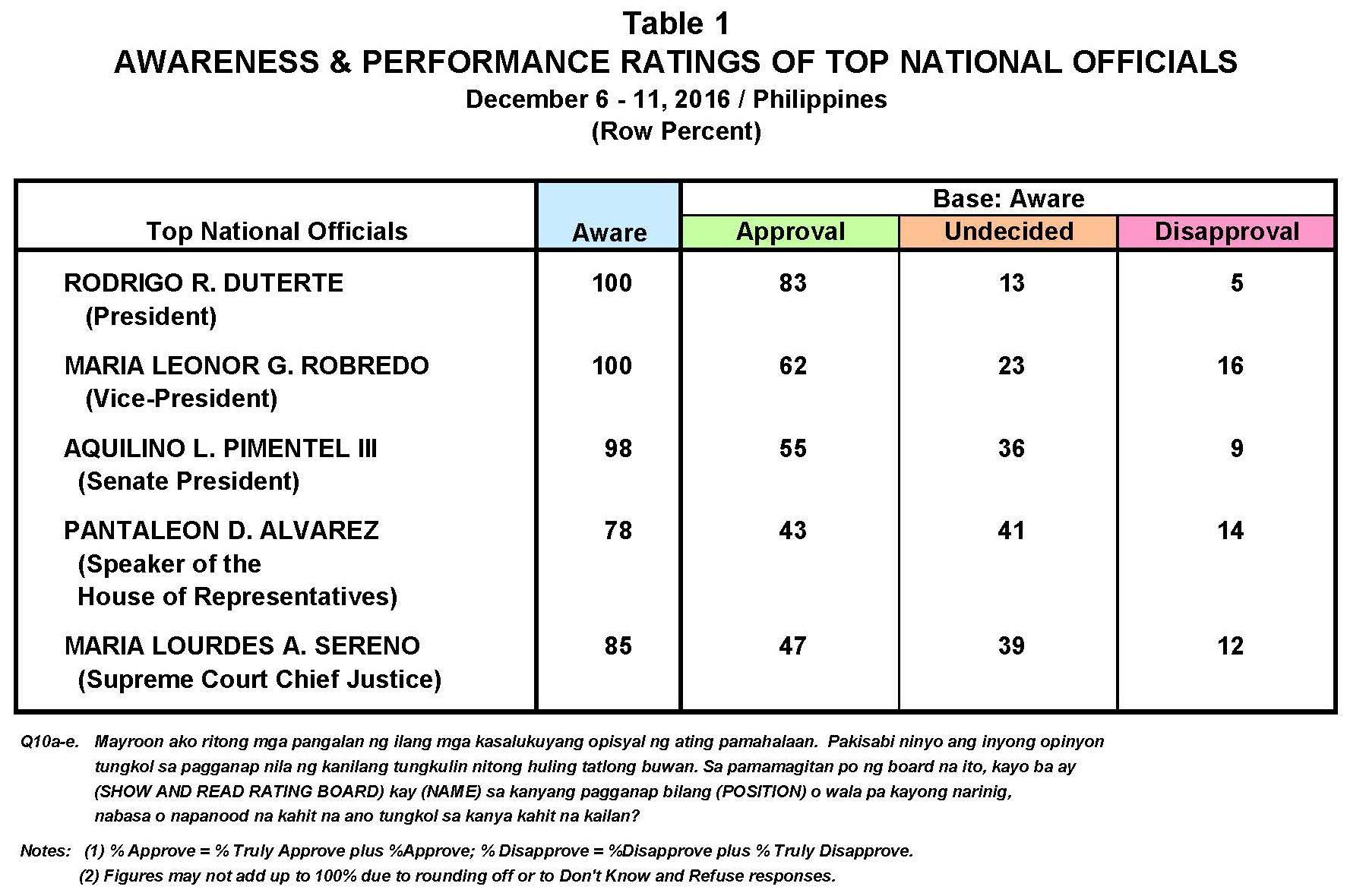 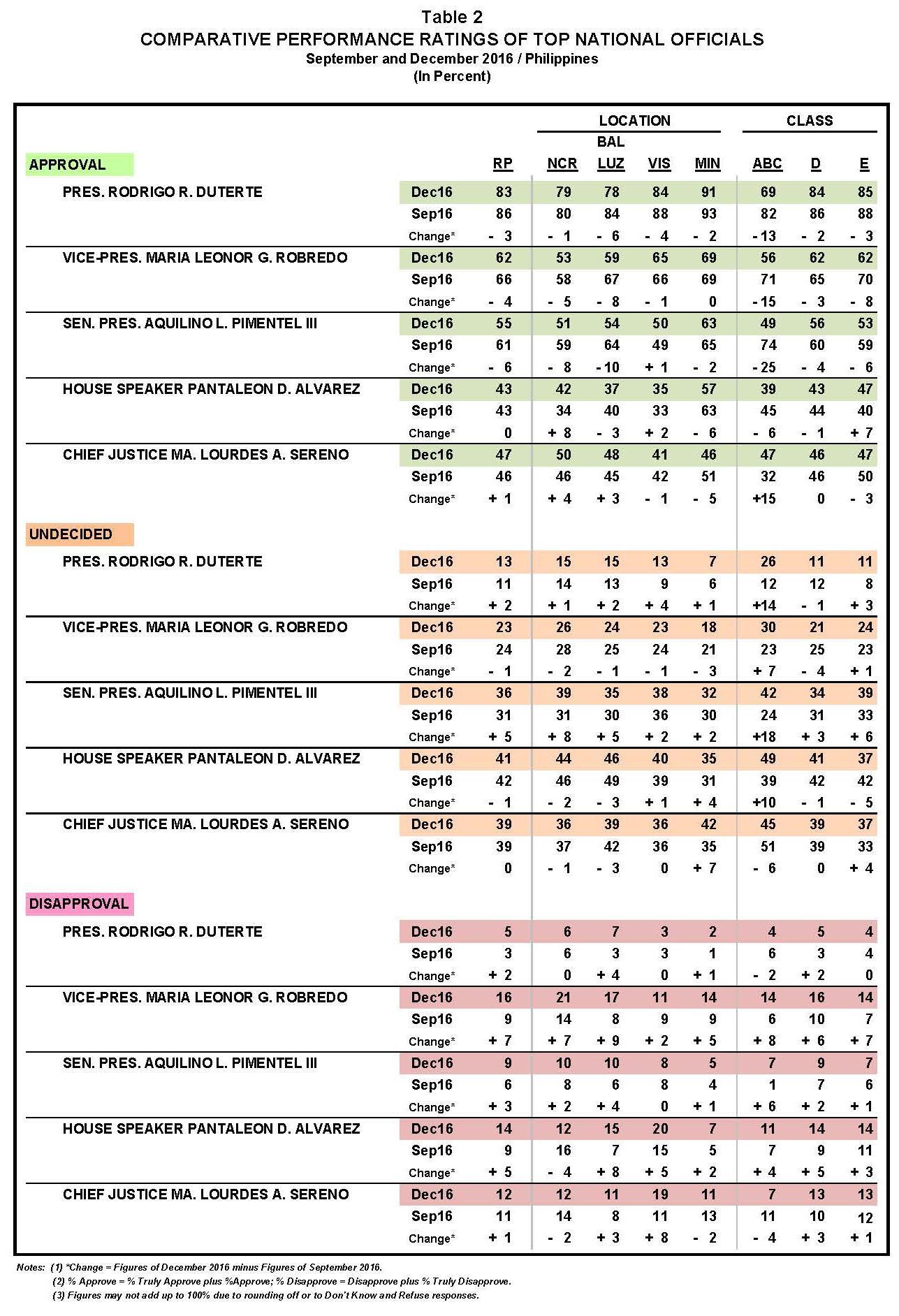 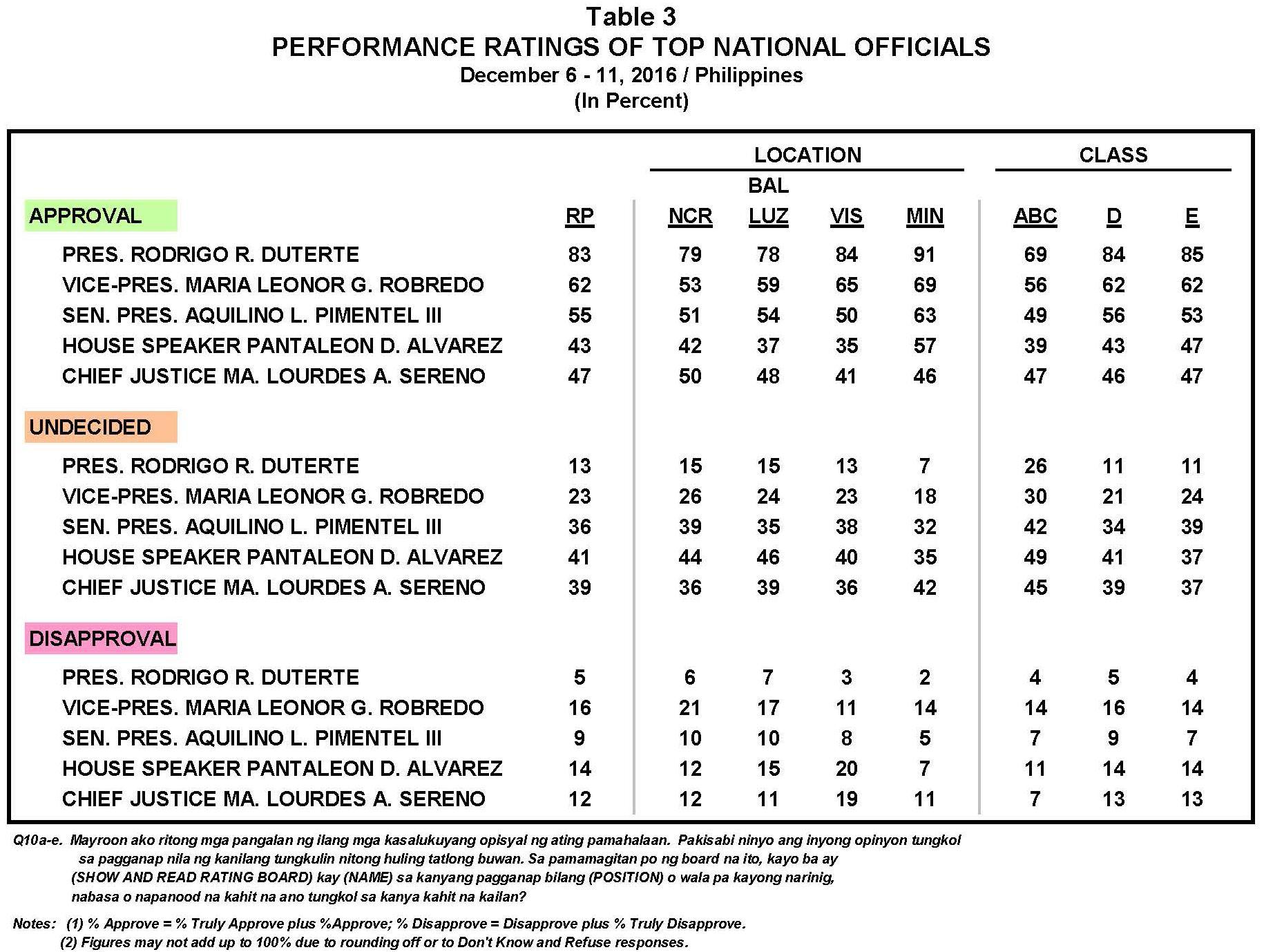 The only majority approval rating of House Speaker Alvarez is granted by Mindanaoans (57%). The lawmaker records almost the same approval and indecision figures in the other geographic areas (35% to 42% versus 40% to 46%) and all socio-economic groupings (39% to 47% versus 37% to 49%).  In the case of Supreme Court Chief Justice Sereno, half of Metro Manilans (50%) are appreciative of her performance while nearly the same percentage of those in the other geographic areas and socio-economic classes either approve of (41% to 48% and 46% to 47%, respectively) or are ambivalent toward her performance (36% to 42% and 37% to 45%, respectively).

Only President Duterte and Vice-President Robredo are trusted by most Filipinos in the last quarter of 2016 (83% and 58%, respectively); the only notable changes in these officials’ trust ratings between September and December 2016 is the drop in the national trust score of Vice-President Robredo (-7 percentage points)

While a huge majority of Filipinos (83%) trust President Duterte, a small majority (58%) expresses the same sentiment toward Vice-President Robredo. Half of Filipinos (50%) trust Senate President Pimentel. Indecision is the plurality opinion regarding the trustworthiness of House Speaker Alvarez (46%). Meanwhile, Supreme Court Chief Justice Sereno scores essentially the same trust and indecision figures (41% and 44%, respectively). These top officials’ distrust ratings vary from 4% for President Duterte to 15% for Vice-President Robredo while levels of ambivalence about their trustworthiness range from 13% for President Duterte to 46% for House Speaker Alvarez. During the period September to December 2016, the only significant change in the trust ratings of these leading government officials is recorded by Vice-President Robredo as she experiences a decline in her overall trust score (-7 percentage points). (Please refer to Tables 4 and 5.) 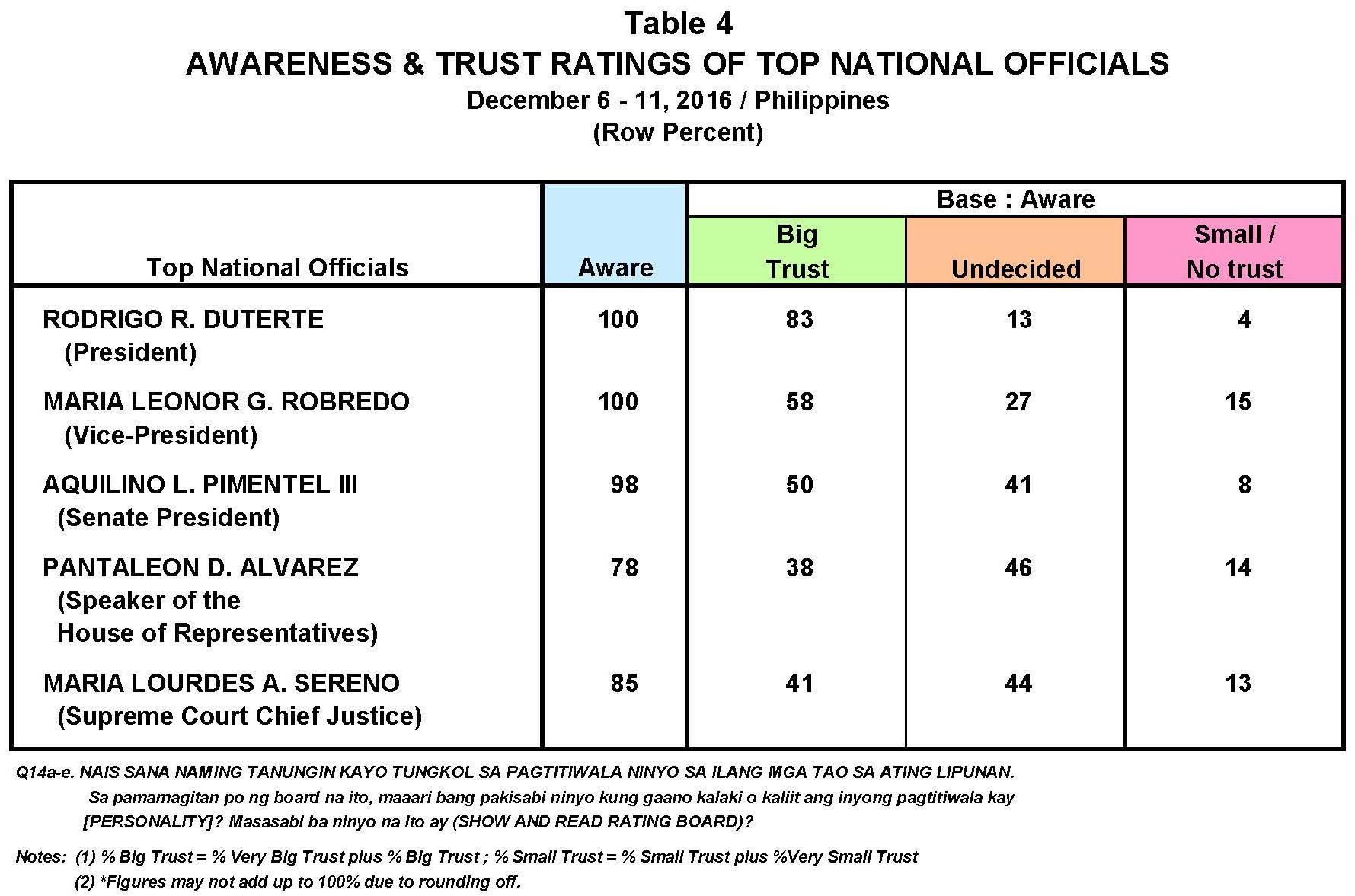 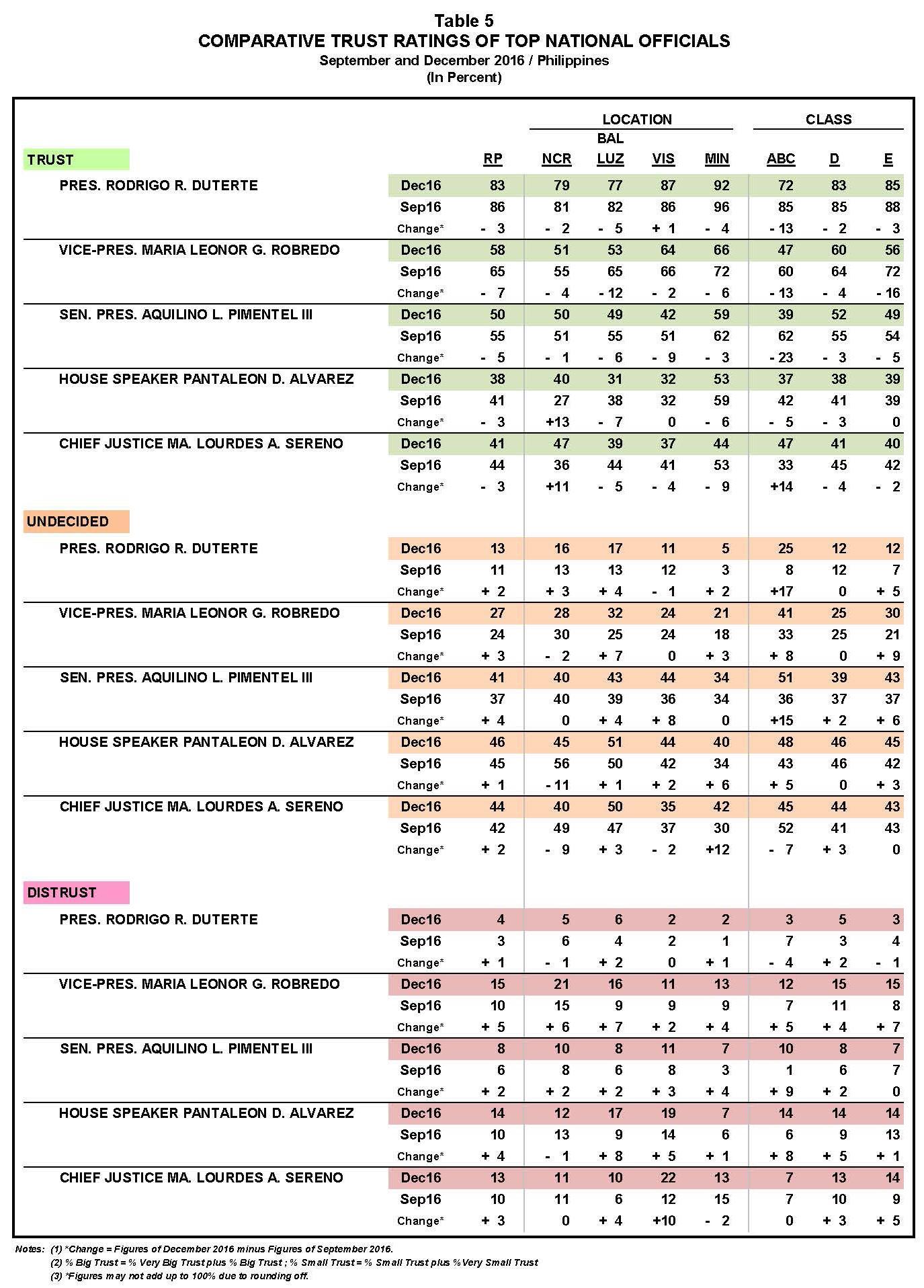 Trust is the majority sentiment toward President Duterte and Vice-President Robredo in every geographic area (77% to 92% and 51% to 66%, respectively). The President also enjoys majority trust scores in all socio-economic classes (72% to 85%) while the Vice-President has majority trust ratings in Classes D and E (60% and 56%, respectively). The latter registers almost the same trust and indecision figures in Class ABC (47% versus 41%). Meanwhile, at least half of Metro Manilans (50%), Mindanaoans (59%), and those in Class D (52%) trust Senate President Pimentel. Basically the same trust and indecision figures are obtained by the Senate President in the rest of Luzon (49% versus 43%), the Visayas (42% versus 44%), and Class E (49% versus 43%) while a bare majority of those in Class ABC (51%) are unable to say if they trust or distrust him. (Please refer to Table 6.) 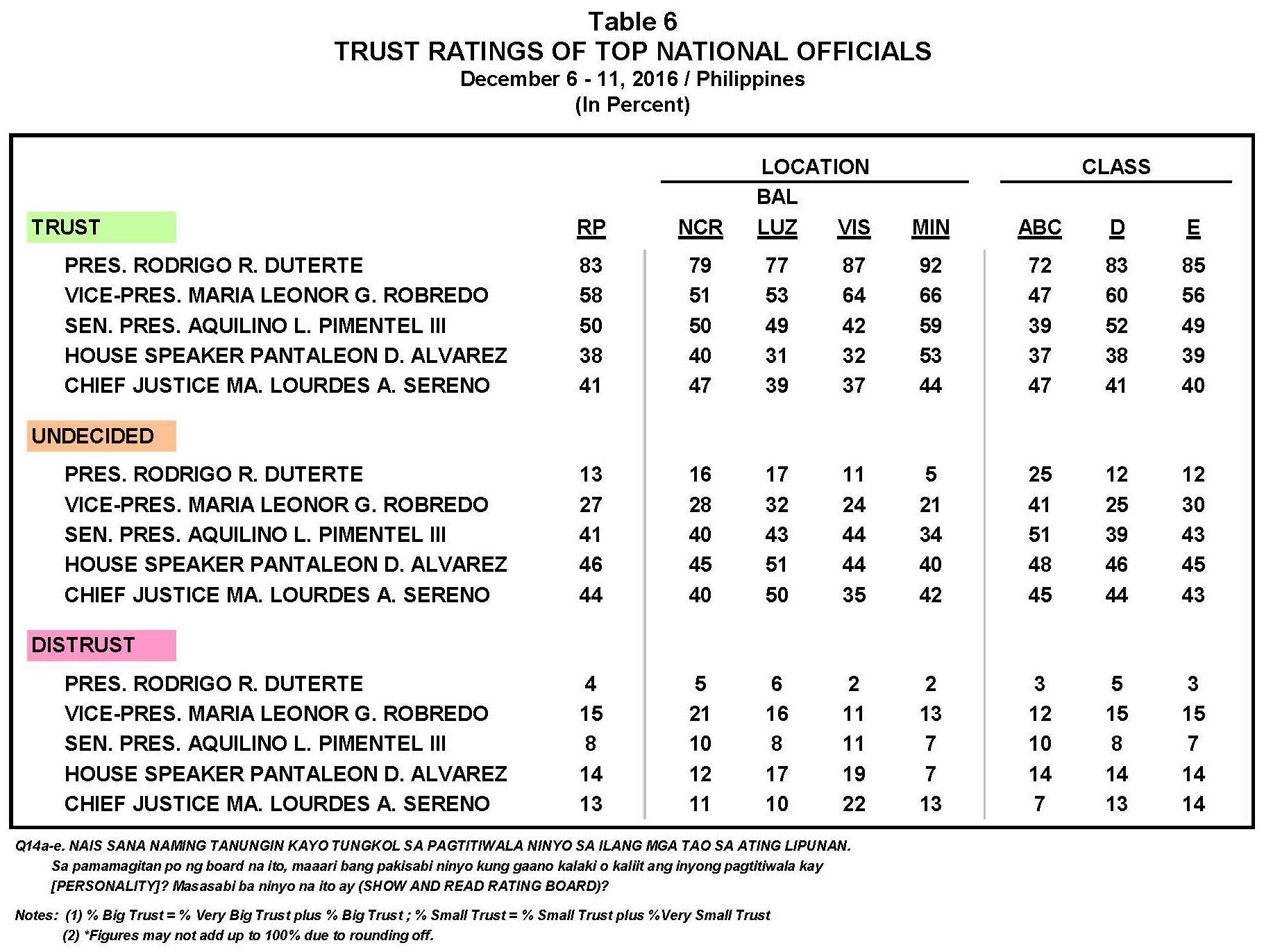 Most Mindanaoans (53%) trust House Speaker Alvarez while the majority sentiment in the rest of Luzon (51%) concerning his trustworthiness is one of ambivalence. A huge plurality in Class D (46%) are also undecided about the latter’s trustworthiness while almost the same trust and indecision figures are recorded by the House Speaker in Metro Manila (40% versus 45%), the Visayas (32% versus 44%), Class ABC (37% versus 48%), and Class E (39% versus 45%). As for Supreme Court Chief Justice Sereno, half of those in the rest of Luzon (50%) are ambivalent on the matter of trusting or distrusting her while she registers about the same trust and indecision figures in the other geographic areas (37% to 47% versus 35% to 42%) and all socio-economic classes (40% to 47% versus 43% to 45%).

Filipinos’ assessment of the trustworthiness of their leading government officials is generally constant between September and December 2016. At the national level, the only significant change is the 7-percentage point decrease in Vice-President Robredo’s trust rating while across geographic areas and socio-economic groupings, the only marked movements are the increase in the trust score of House Speaker Alvarez in Metro Manila (+13 percentage points) and the decline in Vice-President Robredo’s trust figure in Class E (-16 percentage points). (Please refer to Table 5.)

The Congress and the Supreme Court receive majority approval ratings (51% to 58%) and trust scores (51% to 57%) in December 2016; there are hardly any significant changes in these government institutions’ performance and trust ratings between September and December 2016

Most Filipinos approve of and trust the Senate (58% and 57%, respectively), the House of Representatives (both at 51%), and the Supreme Court (55% and 53%, respectively). Levels of indecision as regards these institutions’ performance and trustworthiness vary from 31% to 36% and 34% to 40%, respectively. With regard to their disapproval and distrust ratings, these range from 11% to 13% and 9% to 11%, respectively. During the period September to December 2016, the only significant movements in the performance and trust ratings of these institutions are the drop in the level of overall ambivalence about the Supreme Court’s performance and trustworthiness (both at -7 percentage points). There are no marked changes across geographic areas and socio-economic groupings. (Please refer to Tables 7 to 10.) 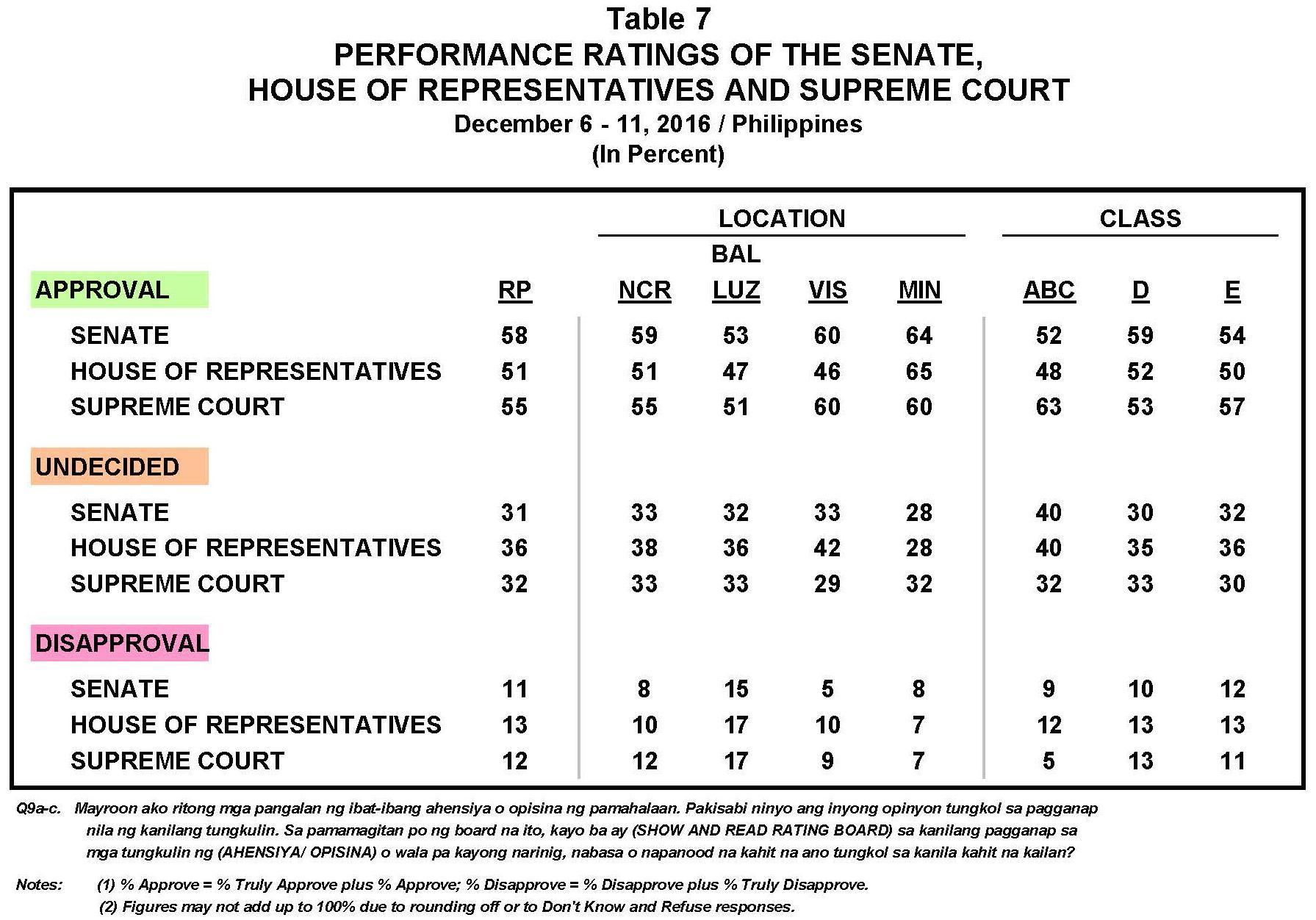 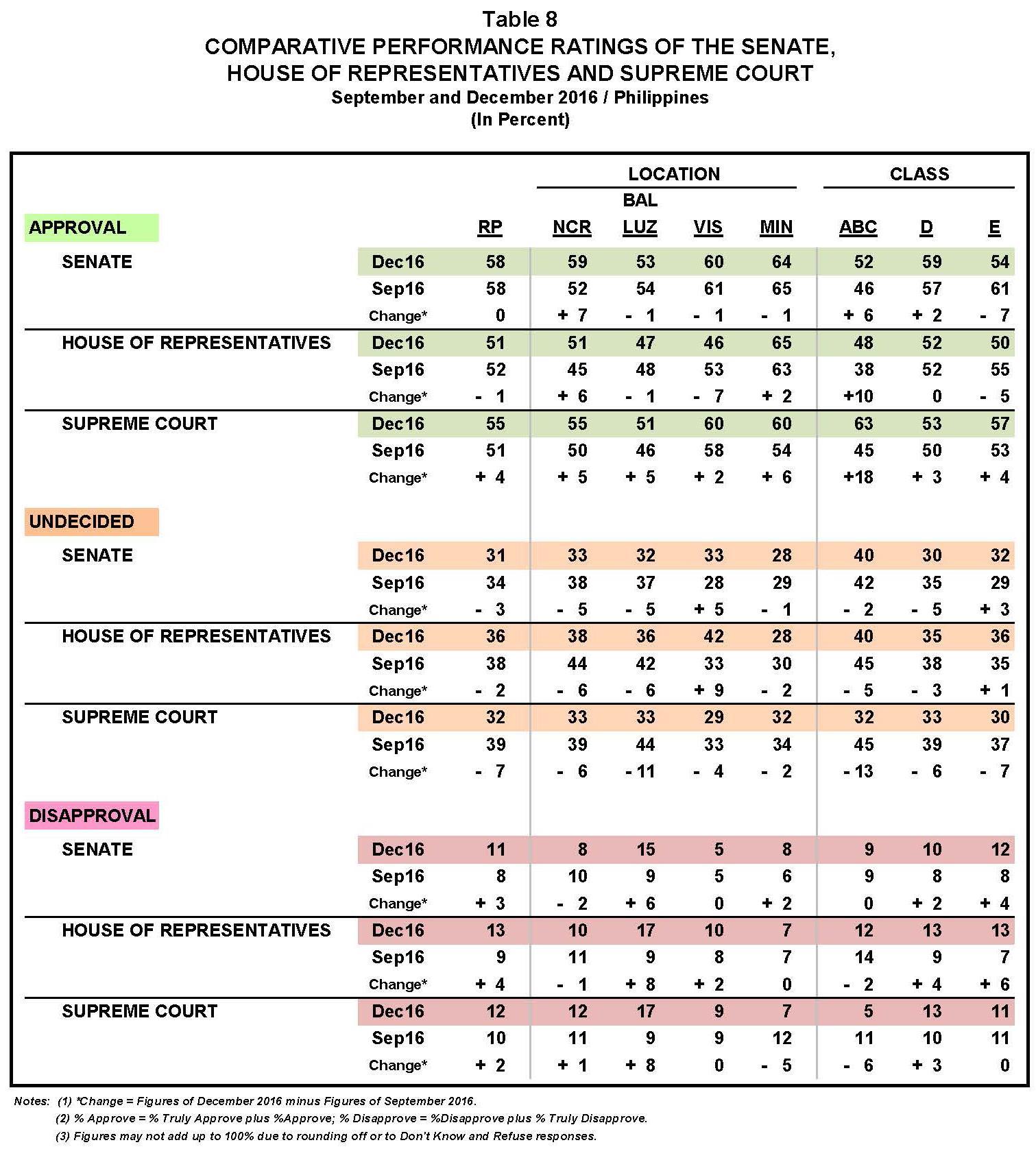 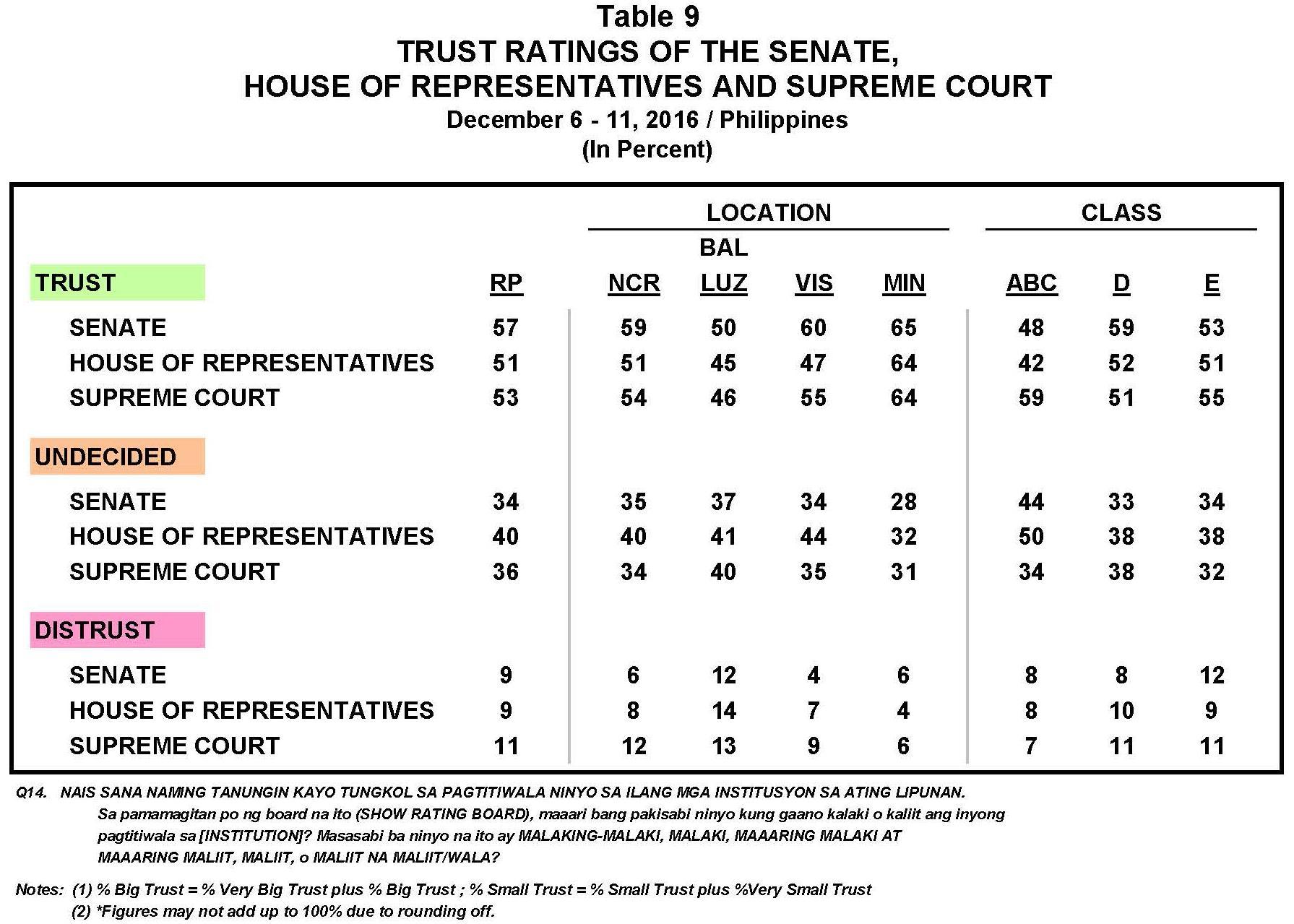 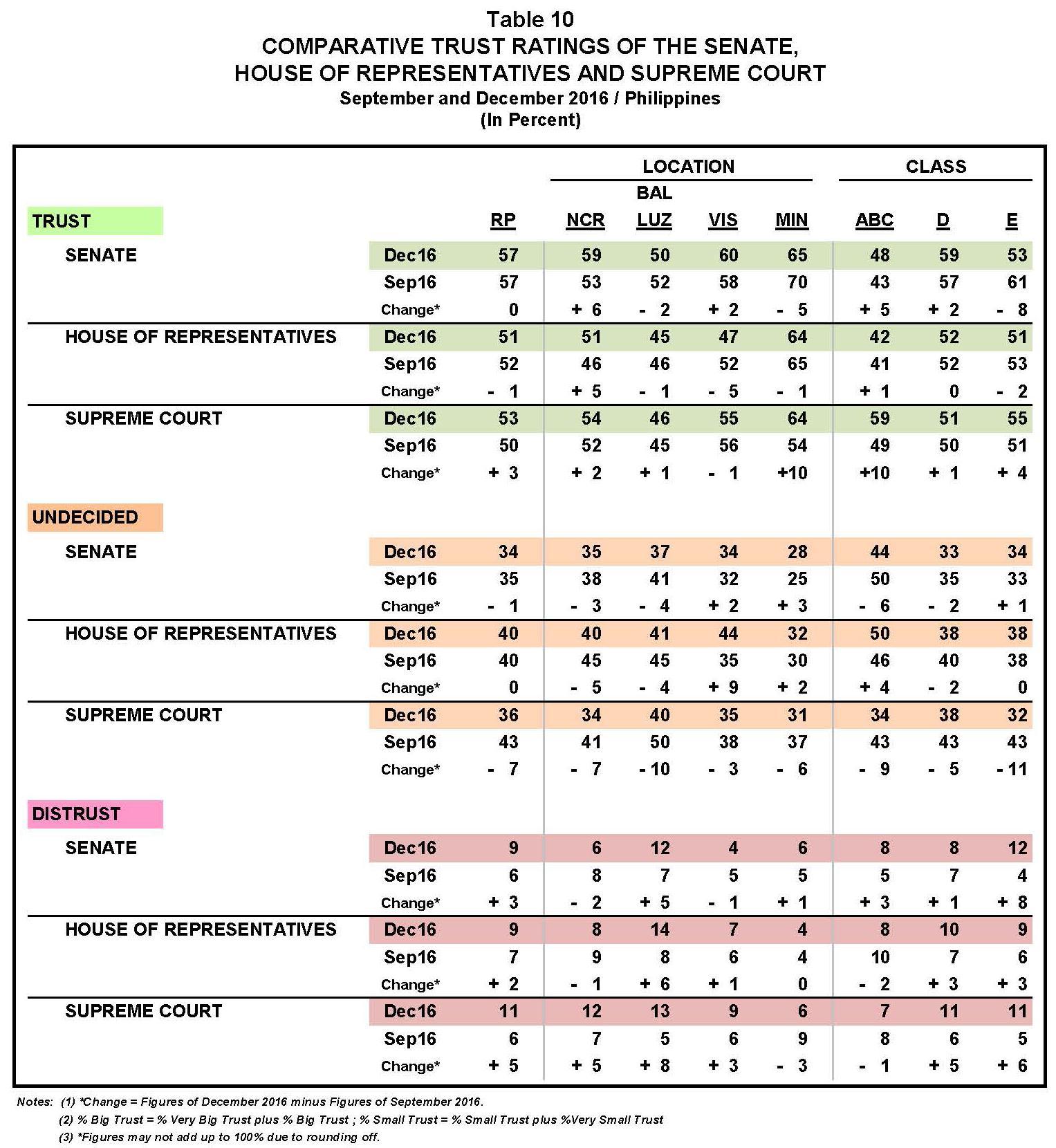