Pulse Asia Research, Inc. is pleased to share with you some findings on the Performance and Trust Ratings of the Top Philippine Government Officials and the Performance Ratings of Key Government Institutions from the September 2020 Ulat ng Bayan national survey. We request you to assist us in informing the public by disseminating this information.

5. The signing into law of the “Bayanihan to Recover as One” Act by President Duterte on 11 September 2020; the law extends to 19 December 2020 the special powers granted to the President to deal with the COVID-19 pandemic and provides a fund amounting to  P 165.5 billion to address the health crisis; although Vice-President Maria Leonor G. Robredo welcomed the passage of the law, she lamented that the amount allocated for pandemic response remains insufficient and called on the administration to spend more and spend efficiently to help those affected by the health crisis;

As in our previous Ulat ng Bayan surveys, this nationwide survey is based on a sample of 1,200 representative adults 18 years old and above. It has a +/- 2.8% error margin at the 95% confidence level.  Subnational estimates for the geographic areas covered in the survey have the following error margins at 95% confidence level:  +/- 5.7% for Metro Manila, the rest of Luzon, Visayas, and Mindanao. Those interested in further technical details may refer to our website (www.pulseasia.ph)

For any clarification or questions, kindly contact Ana Maria Tabunda, Research Director of Pulse Asia Research at 09189436816 or Ronald D. Holmes,  Pulse Asia Research President via Viber or Telegram at +639189335497 or at ronald.holmes@gmail.com (via email.).

Most Filipinos are appreciative of the work done by four (4) of the country’s leading government officials; public assessment of these officials’ performance is essentially unchanged between December 2019 and September 2020 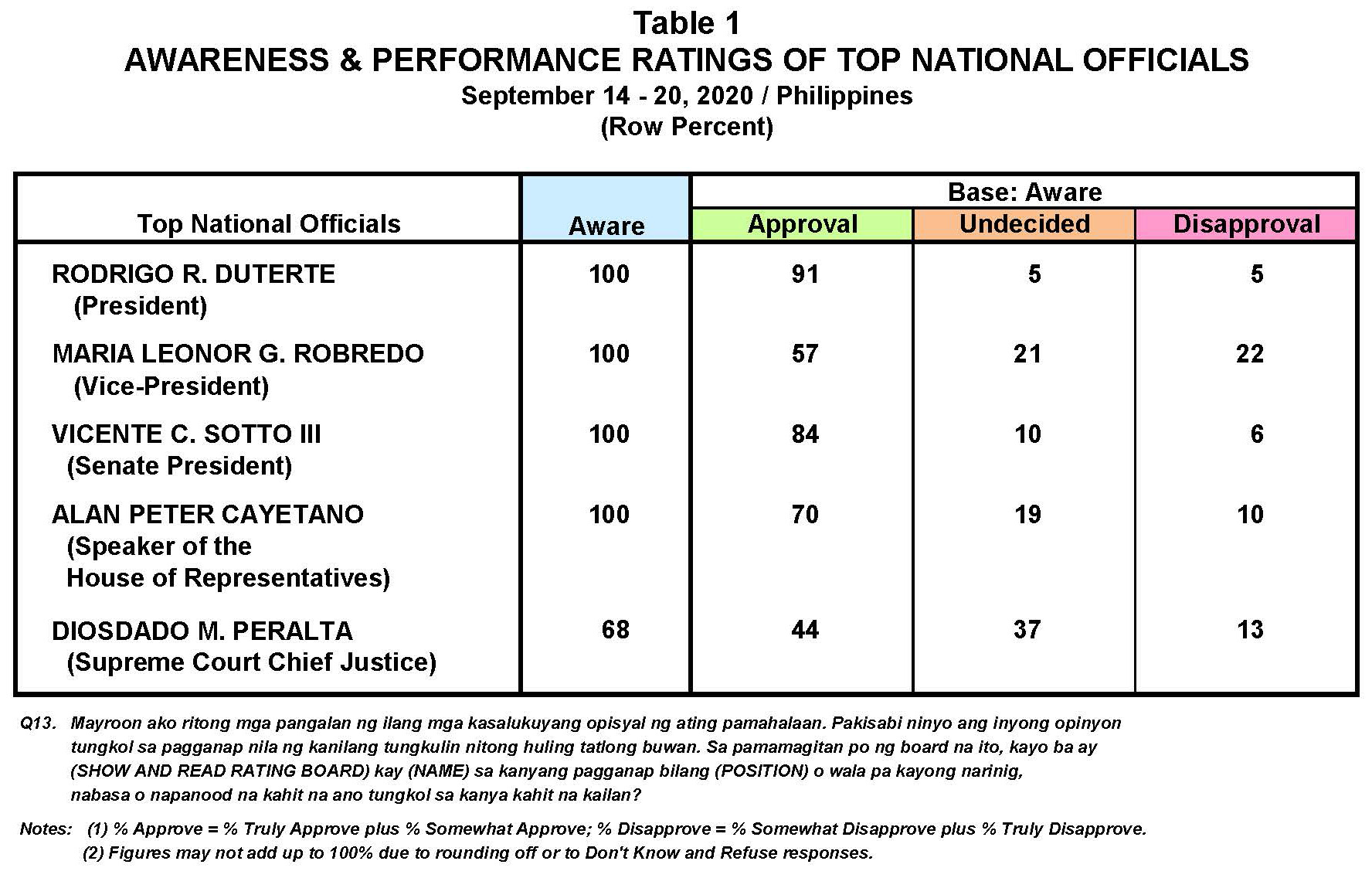 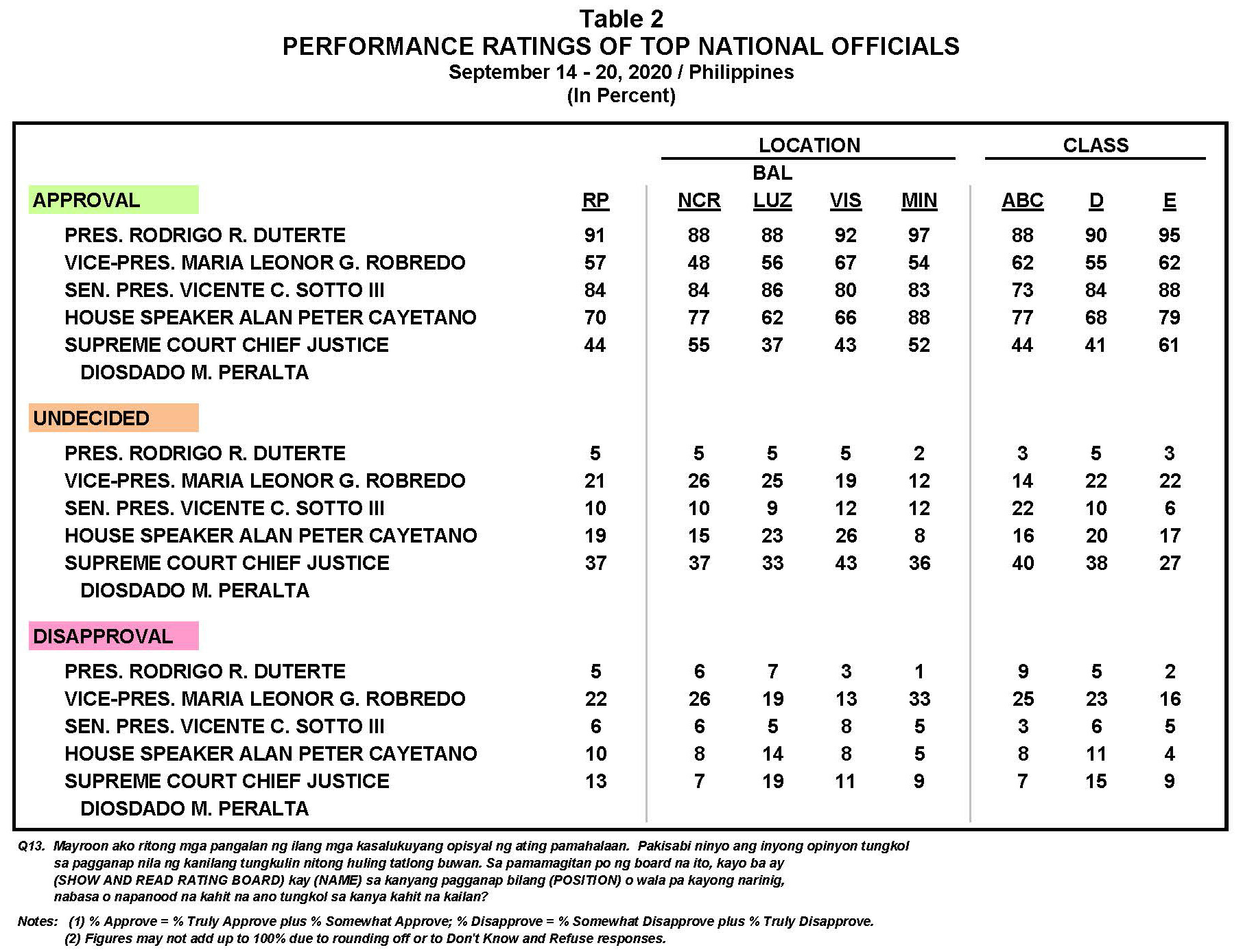 During the period December 2019 to September 2020, the only notable changes in these top government officials’ performance ratings are recorded by Vice-President Robredo and House Speaker Cayetano. The former’s approval rating goes up among Visayans (+13 percentage points) while the latter experiences several movements in his own ratings and these are: (1) a 10-percentage point drop in his approval score at the national level; (2) the decline in his approval ratings in the rest of Luzon, the Visayas, and Class D (-12 to -19 percentage points); (3) an increase in the level of appreciation for his legislative performance among Metro Manilans (+13 percentage points); and (4) a rise in his indecision figure in the Visayas (+15 percentage points). There are no comparative data for Supreme Court Chief Justice Peralta since this is the first time he is included in the Ulat ng Bayan survey. (Please refer to Table 3.) 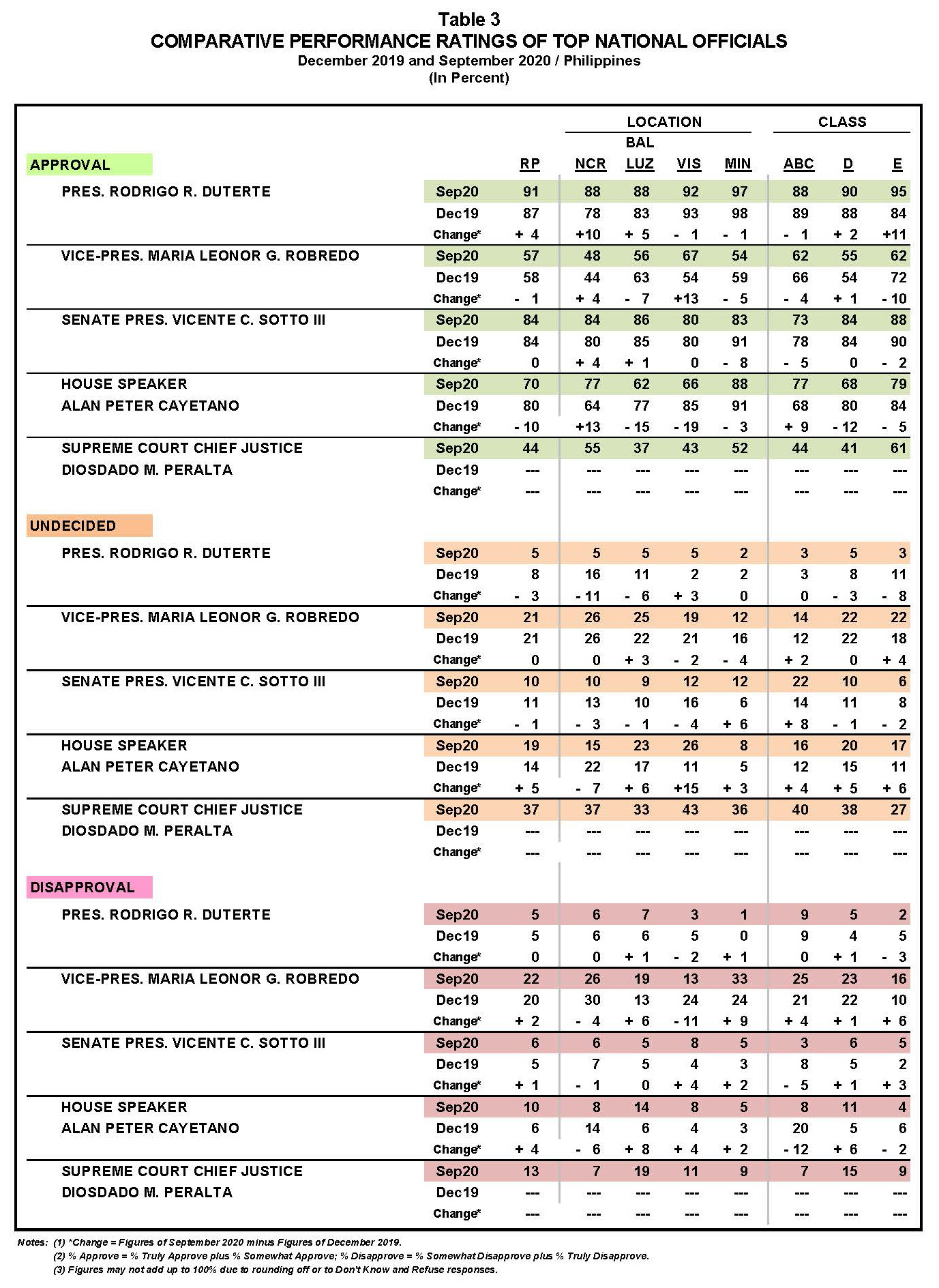 Trust is the predominant sentiment toward President Duterte (91%), Senate President Sotto (79%), and House Speaker Cayetano (67%); marked movements occur in the trust ratings of the top Philippine government officials over the period December 2019 to September 2020

Sizeable to big majority trust ratings are enjoyed by President Duterte (91%), Senate President Sotto (79%), and House Speaker Cayetano (67%) while half of Filipinos (50%) express trust in Vice-President Robredo. Basically the same percentages of Filipinos either trust Supreme Court Chief Justice Peralta (39%) or are unable to say whether they trust or distrust him (42%). Levels of distrust in these government officials range from 3% for President Duterte to 22% for Vice-President Robredo. Indecision toward the trustworthiness of these entities range from 6% for the President to 42% for the Supreme Court Chief Justice. (Please refer to Table 4.) 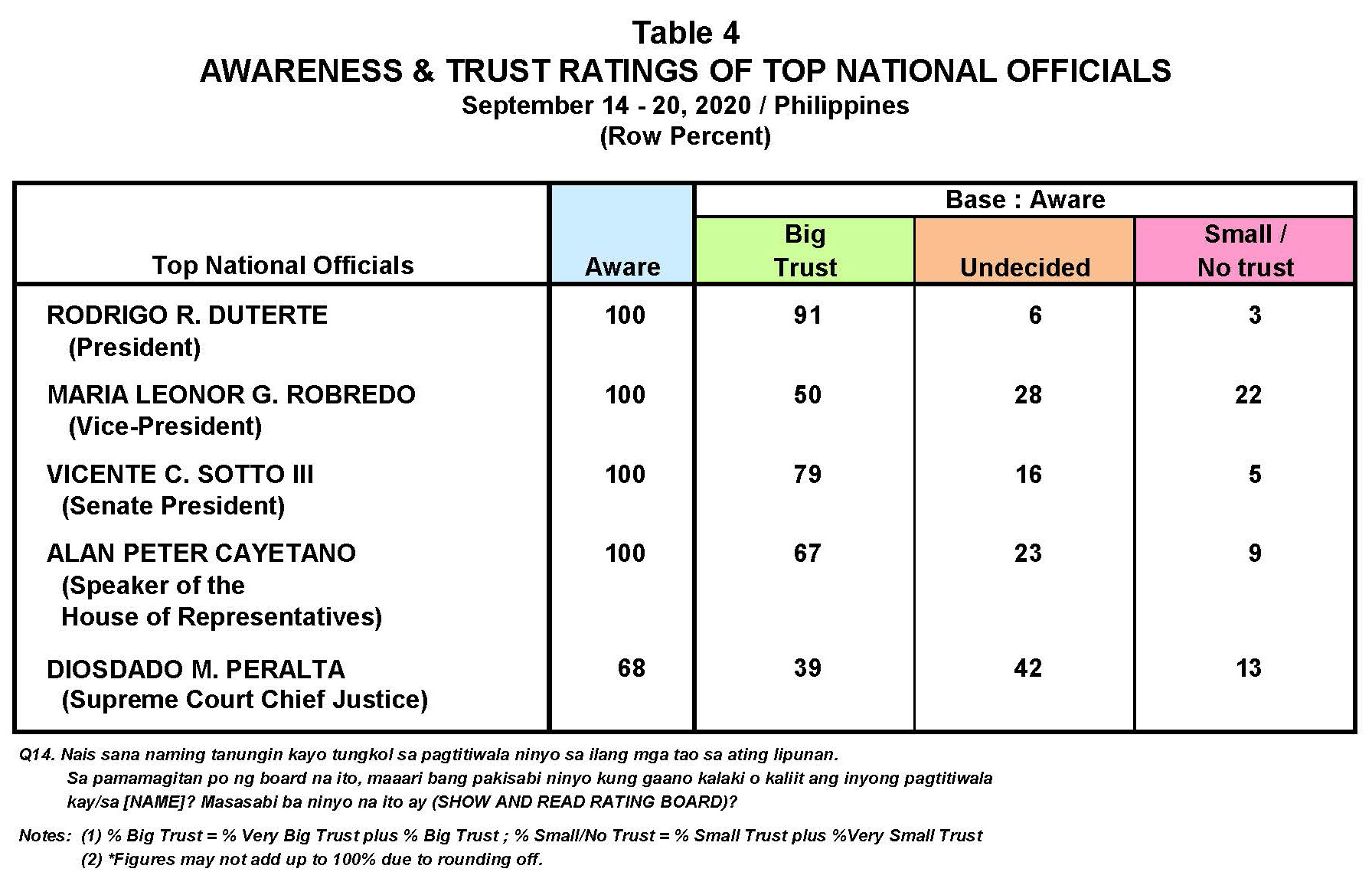 In the different geographic areas and socio-demographic classes, majority levels of trust are posted by President Duterte (89% to 95% and 81% to 96%, respectively), Senate President Sotto (67% to 86% and 70% to 84%, respectively), and House Speaker Cayetano (62% to 76% and 66% to 74%, respectively). Trust is the majority sentiment toward the Vice-President in the Visayas (66%) and Classes ABC and E (54% to 60%). Half of those in the rest of Luzon (50%) and nearly half of those belonging to Class D (48%) trust Vice-President Robredo. About the same percentages of Metro Manilans either trust the latter (44%) or express ambivalence on the matter of trusting or distrusting her (38%). As for Mindanawons, nearly the same percentages either trust or distrust the Vice-President (40% versus 37%). For Supreme Court Chief Justice Peralta, his only majority trust rating (57%) is granted by those in Class E. The latter has essentially the same trust and indecision figures in all geographic areas (33% to 47% versus 38% to 49%) and Classes ABC and D (36% versus 44% to 45%). (Please refer to Table 5.) 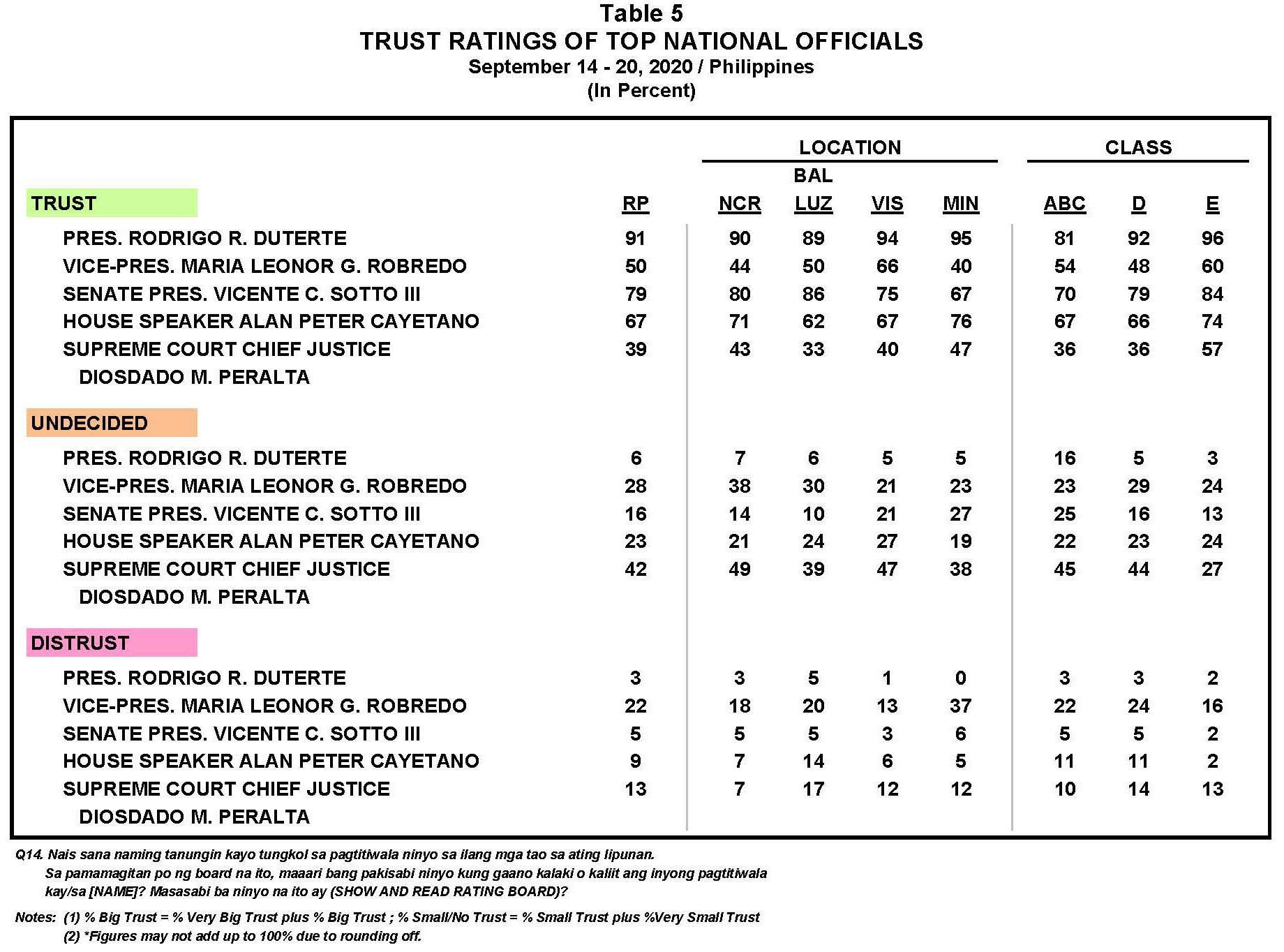 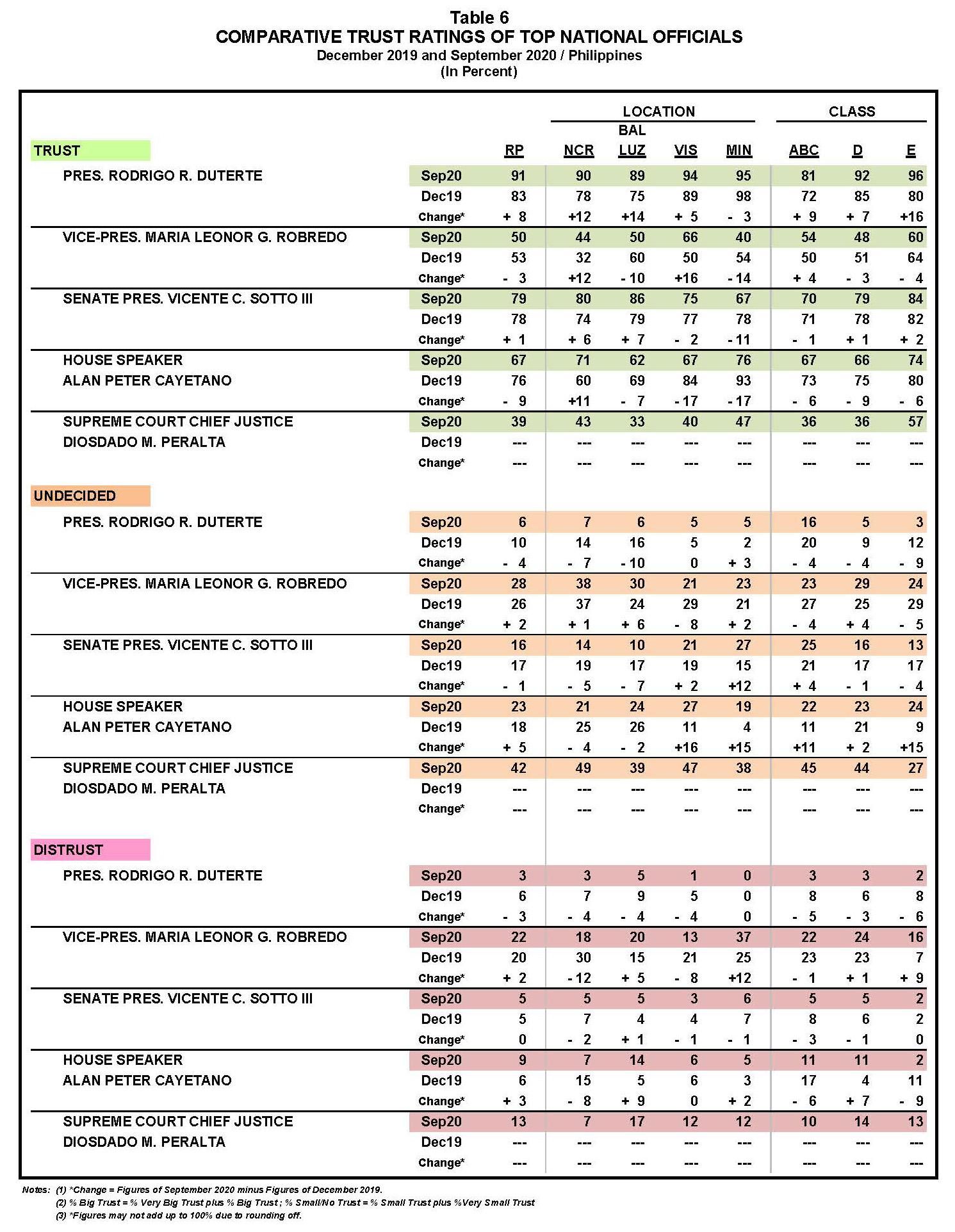 The Congress and the Supreme Court post majority approval figures in September 2020 (61% to 71%); few changes may be noted in these government institutions’ performance ratings between December 2019 and September 2020 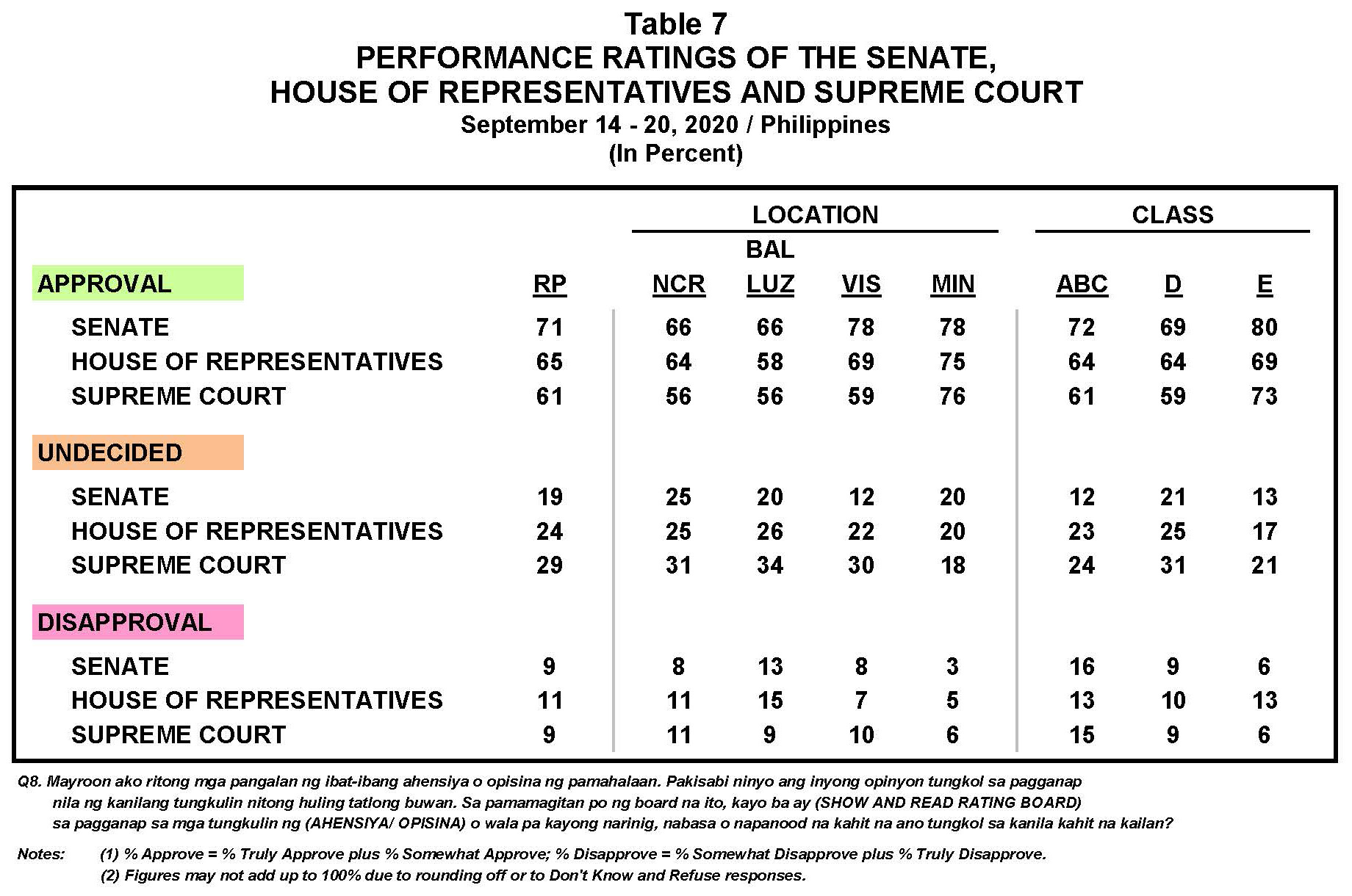 The performance ratings of the Congress and the Supreme Court are nearly constant during the period December 2019 to September 2020 both at the national level and across geographic areas and socio-economic groupings. The only exceptions to this overall observation are the: (1) rise in the Senate’s approval rating (+14 percentage points) and decline in its indecision figure (-13 percentage points) in the Visayas and (2) increase in the level of approval for the Supreme Court’s performance (+13 percentage points) among Mindanawons. (Please refer to Table 8.) 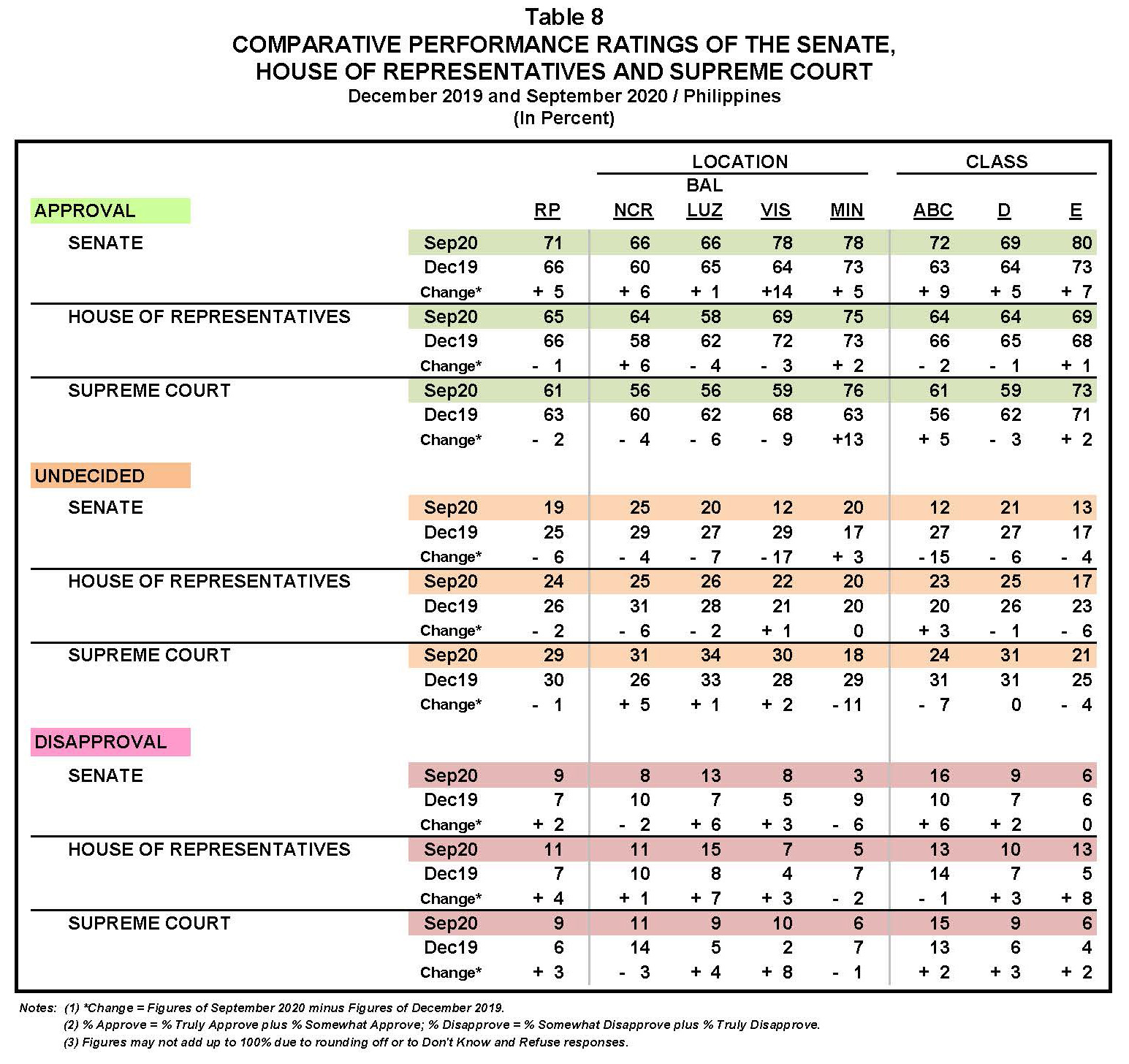