Pulse Asia Research, Inc. is pleased to share with you some findings on the National Administration and the President’s Handling of the COVID-19 Pandemic from the September 2020 Ulat ng Bayan national survey. We request you to assist us in informing the public by disseminating this information.

5. The signing into law of the “Bayanihan to Recover as One” Act by President Duterte on 11 September 2020; the law extends to 19 December 2020 the special powers granted to the President to deal with the COVID-19 pandemic and provides a fund amounting to P 165.5 billion to address the health crisis; although Vice-President Maria Leonor G. Robredo welcomed the passage of the law, she lamented that the amount allocated for pandemic response remains insufficient and called on the administration to spend more and spend efficiently to help those affected by the health crisis;

As in our previous Ulat ng Bayan surveys, this nationwide survey is based on a sample of 1,200 representative adults 18 years old and above. It has a +/- 2.8% error margin at the 95% confidence level. Subnational estimates for the geographic areas covered in the survey have the following error margins at 95% confidence level: +/- 5.7% for Metro Manila, the rest of Luzon, Visayas, and Mindanao. Those interested in further technical details may refer to our website (www.pulseasia.ph)

For any clarification or questions, kindly contact Ana Maria Tabunda, Research Director of Pulse Asia Research at 09189436816 or Ronald D. Holmes, Pulse Asia Research President via Viber or Telegram at +639189335497 or at ronald.holmes@gmail.com (via email.).

Approval is the prevailing opinion among Filipinos toward the efforts of the national administration and President Rodrigo R. Duterte to deal with the continuing COVID-19 pandemic

About eight (8) out of every 10 Filipinos (84%) have a positive opinion about the work done by the Duterte administration to control the spread of the novel coronavirus that causes COVID-19 and to provide assistance to those who lost their livelihood or job due to the pandemic. In particular, small majorities of Filipinos somewhat approve of the performance of the present dispensation as far as the issues are concerned (51% and 53%, respectively). Furthermore, approval is the majority sentiment across geographic areas (78% to 86% and 75% to 91%, respectively) and socio-economic classes (84% to 85% and 74% to 91%, respectively). It may be noted that Mindanawons are more inclined to approve of the Duterte administration’s efforts to assist those who lost their sources of income as a result of the pandemic compared to Metro Manilans (91% versus 75%). (Please refer to Table 1.) 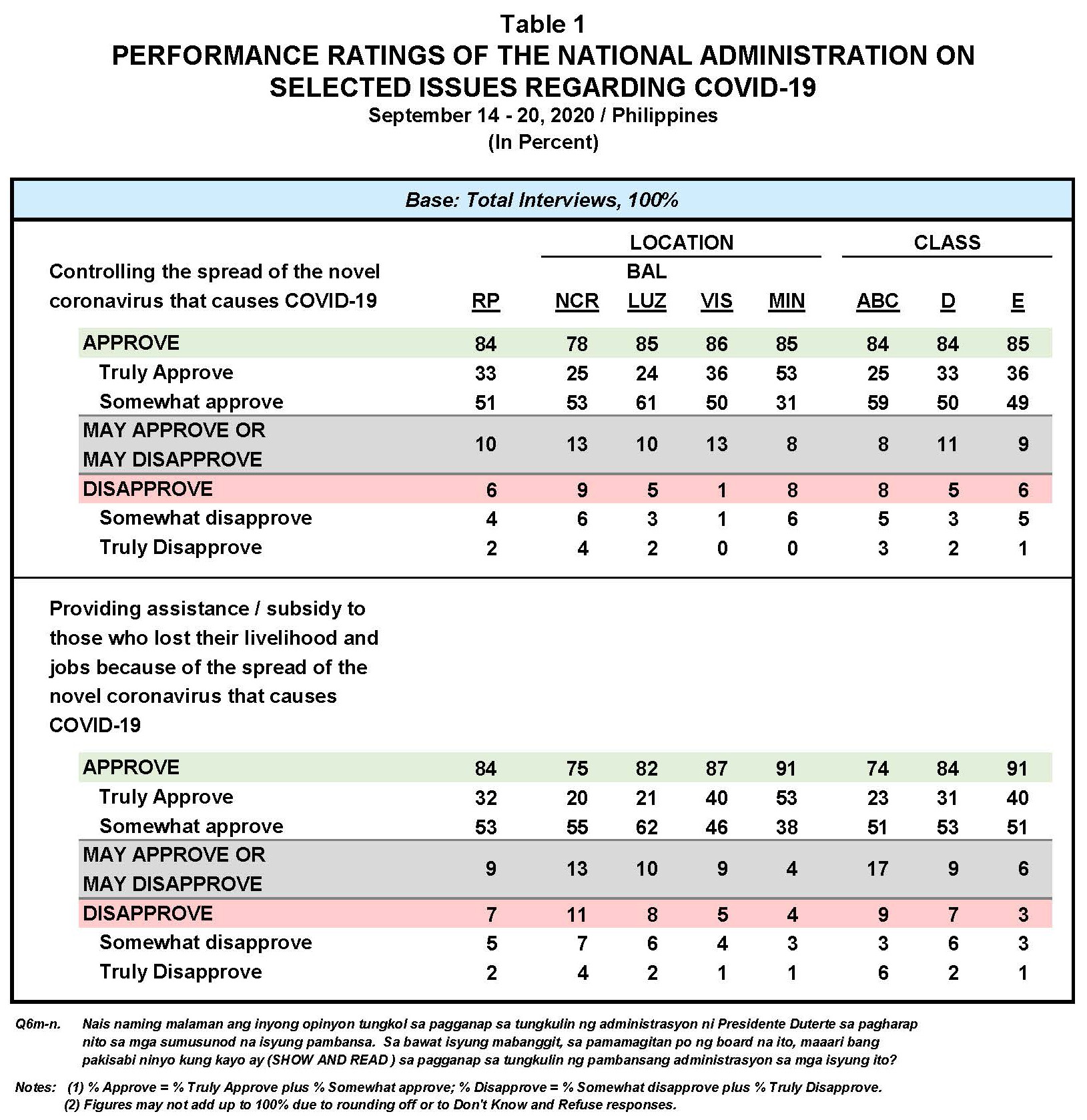 At the national level, the Duterte administration registers single-digit disapproval ratings in terms of its initiatives to control the spread of the novel coronavirus (6%) and to help Filipinos who lost their sources of income due to the pandemic (7%). Meanwhile, ambivalence concerning the administration’s handling of these issues is expressed by 10% and 9% of Filipinos, respectively. The figures recorded across geographic areas and socio-economic groupings do not differ significantly from the national ratings.

For 92% of Filipinos, President Rodrigo R. Duterte has done well in terms of preventing the spread of COVID-19 in the country. More specifically, 62% of Filipinos truly approve of presidential performance as far as this issue is concerned while 30% somewhat approve of the same. The rest of Filipinos either disapprove of the President’s performance (3%) or express indecision on the matter (5%). Across geographic areas and socio-economic classes, President Duterte posts huge majority approval ratings (87% to 98% and 78% to 95%, respectively). More specifically, most Filipinos across these subgroupings are truly appreciative of the President’s work in the area of preventing the spread of COVID-19 (54% to 79% and 52% for 64%, respectively). (Please refer to Table 2.) 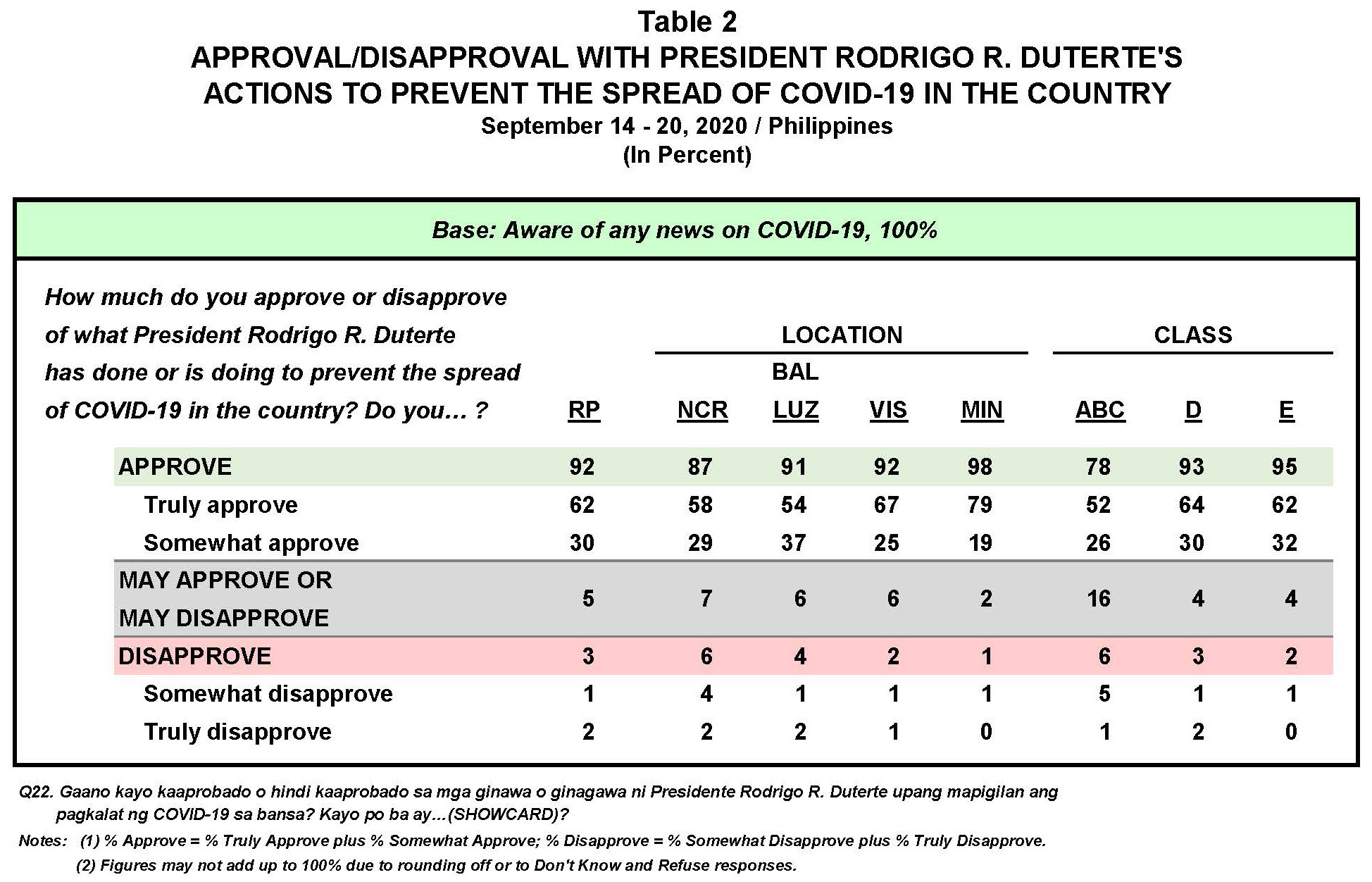 In mid-September 2020, 97% of Filipinos express concern about getting sick due to the novel coronavirus that causes COVID-19. More particularly, 84% of Filipinos are very much worried while 13% are somewhat worried about contracting COVID-19. Across geographic areas and socio-economic classes, the prevailing sentiment on the matter is one of worry (95% to 98% and 92% to 99%, respectively), with overwhelming majorities being very much worried about getting COVID-19 (81% to 91% and 70% to 87%, respectively). Only 2% of Filipinos are not worried about contracting COVID-19 while indecision on the matter is expressed by 1%. (Please refer to Table 3.) 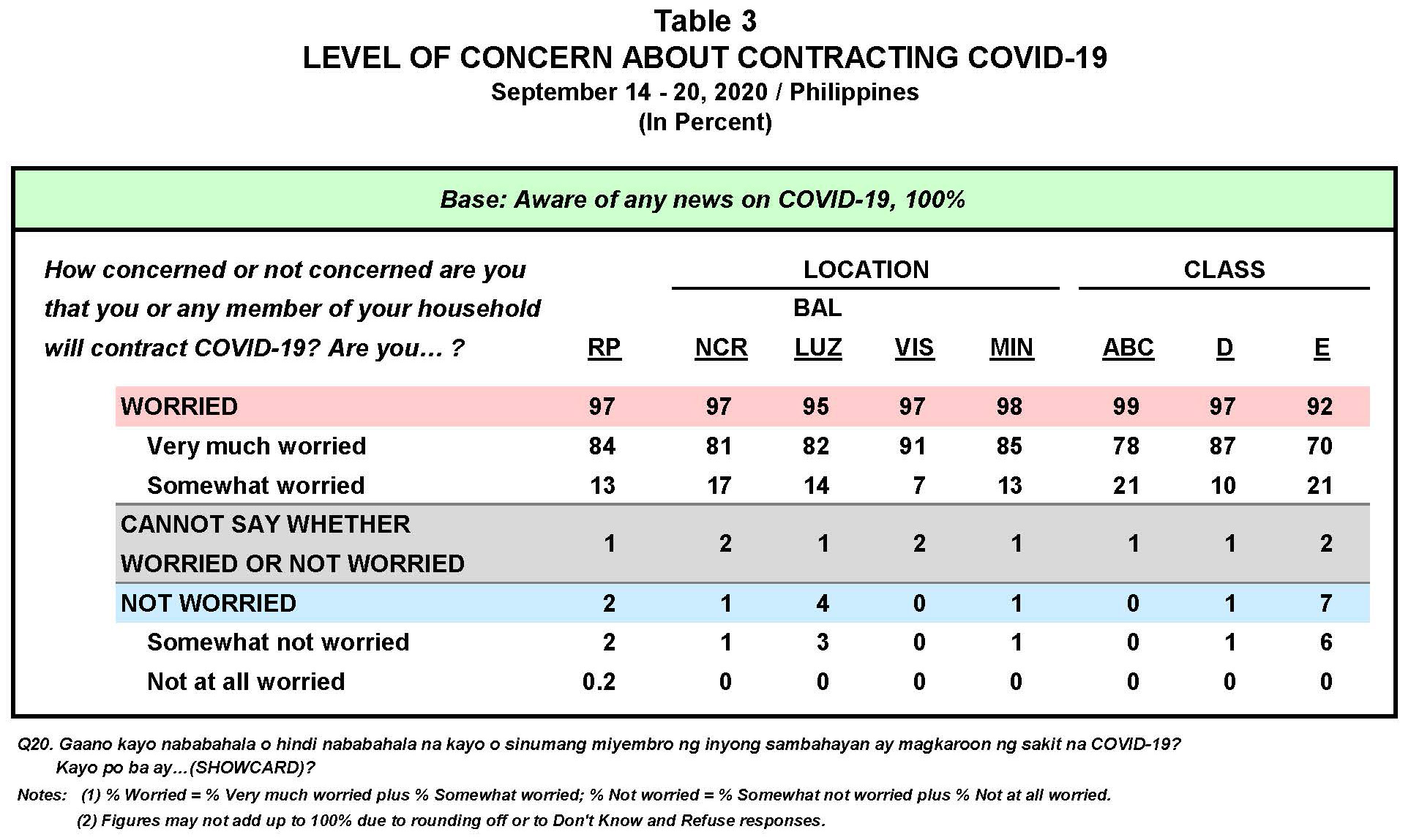 A big majority of Filipinos (71%) regularly clean their hands with soap or alcohol/hand sanitizer to avoid getting COVID-19 – an act reported by most Filipinos in the different geographic areas and socio-economic groupings (69% to 76% and 59% to 75%, respectively). Another measure undertaken by most Filipinos to protect themselves from COVID-19 is to use face masks (55%). This is reported by small majorities in all geographic areas (52% to 57%) and Classes ABC and D (both at 55%). (Please refer to Table 4.) 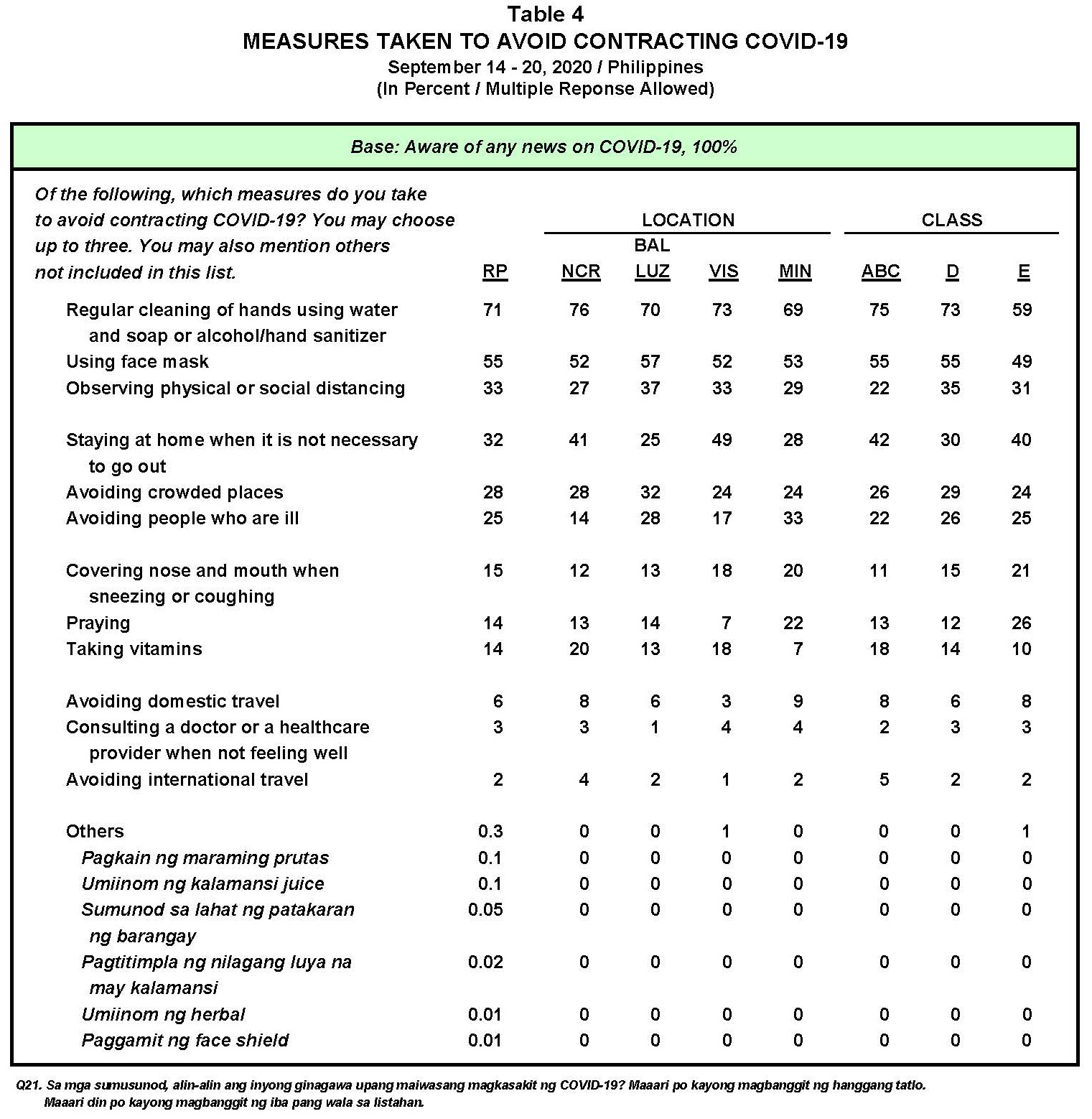 A second set of measures done by Filipinos includes observing physical or social distancing (33%), staying at home unless it is necessary to go out (32%), and avoiding crowded places (28%). A quarter of Filipinos (25%) make an effort to avoid people who are sick. Meanwhile, covering one’s nose and mouth when sneezing and coughing (15%), praying (14%), and taking vitamins (14%) comprise a fourth group of safety precautions undertaken by Filipinos. The least often mentioned measures are avoiding domestic or international travel (6% and 2%, respectively) and consulting a doctor or a healthcare provider when unwell (3%). Volunteered responses are each cited by less than 1% of Filipinos.