Pulse Asia Research, Inc. is pleased to share with you some findings on Presidential Performance and Trust Ratings from the September 2016 Ulat ng Bayan national survey. We request you to assist us in informing the public by disseminating this information.

Among the key developments which dominated the headlines in the days leading up to the fieldwork for this survey and during the actual conduct of the interviews are the following:

1. The initial testimony before the Senate Committee on Justice and Human Rights of Mr. Edgar Matobato, an alleged hitman belonging to the so-called Davao Death Squad, wherein he linked President Rodrigo R. Duterte to the extrajudicial killing of about 1,000 criminal suspects and political opponents of the President while he was serving as mayor of Davao City from 1988 to 2013;

2. President Duterte’s statement that he does not know Mr. Matobato personally; the denial made by Davao City Paolo Duterte that he ordered the killing of a businessman as alleged by the hitman; and the remarks of Presidential Spokesperson Ernesto Abella that the President and his administration continue to be committed to their anti-drug campaign amidst various controversies;

3. The concern expressed by various international bodies, primarily the United Nations (UN), and foreign leaders over the increasing number of drug-related deaths in the country since President Duterte assumed office on 30 June 2016; groups such as Human Rights Watch and Amnesty International have called for an investigation into the serious allegations against President Duterte; the invitation extended by the President to leaders of the UN and the European Union to a debate on human rights and extrajudicial killings even as he maintained that the country’s police and military forces are not involved in the drug-related killings;

4. The apology issued by President Duterte to the Jewish communities around the world when he referred to the Holocaust and Adolf Hitler in connection with his ongoing campaign against drugs; the President clarified that he mentioned Hitler only because some of his critics have likened him to the Nazi leader as a result of his approach to his war on drugs;

5. The removal of Senator Leila de Lima as chairperson of the Senate Justice and Human Rights Committee which is looking into the extrajudicial killings in the country which have occurred since President Duterte took office; Senator Richard Gordon assumed the post left by Senator de Lima; President Duterte’s vow to continue his campaign to ‘kill all drug lords’ no matter what the findings of the Committee will be;

6. The investigation at the House of Representatives into the proliferation of drug syndicates and illegal drugs at the National Bilibid Prisons (NBP) as well as the reported links of Senator de Lima, while she was Justice Secretary, to drug lords who supposedly gave her millions in campaign funds for her senatorial bid in the May 2016 elections; Senator de Lima said she will not attend the hearing which, she claimed, is only being done to persecute her publicly;

7. The release of another list by President Duterte which contains the names of 40 local judges and some Chinese nationals who are reported to have links to illegal drugs; prior to this, the President stated that he would need an extension of six (6) months on the deadline of three (3) to six (6) months he imposed on himself to deal with the problem of illegal drugs in the country, the extent of which he was not aware of until he became president;

8. The approval in principle by the House Committee on Transportation of the proposal to grant emergency powers to President Duterte to enable him to address the worsening traffic situation in Metro Manila while at the Senate, the Committee on Public Services conducted its hearings on the matter and is set to come up with a draft bill in November 2016;

9. The accusation made by Senator Alan Peter Cayetano against the Liberal Party (LP) to the effect that the Senate testimony of Mr. Matobato is part of a grand plan to oust President Duterte and have Vice-President Maria Leonor G. Robredo assume the presidential post; similarly, Communications Secretary Martin Andanar said he has heard unverified reports regarding a plan by some Filipino-Americans to oust President Duterte by January 2017; the Vice-President and the LP assured the public that they continue to support the reforms being initiated by the current administration;

10. The commemoration of the signing of Presidential Decree (PD) 1081 by then President Ferdinand E. Marcos, with various protest actions being held in different parts of the country; President Duterte said he is not inclined to declare martial law in order to help resolve serious problems in the country such as illegal drugs;

11. The passing away of former Senator Miriam Defensor-Santiago on 29 September 2016 after losing her battle against lung cancer; and

12. In the economic front, the depreciation of the local currency against the American dollar which, according to Budget Secretary Benjamin Diokno, is due to the strengthening of the dollar as a result of the impending increase in interest rates by the US Federal Reserve System and not because of several controversial pronouncements made by President Duterte; and the slippage in the country’s rating in the Global Competitiveness Report by 10 notches.

Appreciation for his work and trust in him are sentiments expressed by most Filipinos (86%) toward President Rodrigo R. Duterte; only marginal changes in presidential trust ratings occur between July and September 2016 while no comparative data are available for presidential performance ratings

Most Filipinos (86%) approve of the work done by President Rodrigo R. Duterte in his first three (3) months in office. Ambivalence toward presidential performance is more pronounced than outright disapproval (11% versus 3%). This is the first time President Duterte is being performance-rated in Pulse Asia Research’s Ulat ng Bayan survey. (Please refer to Table 1.) 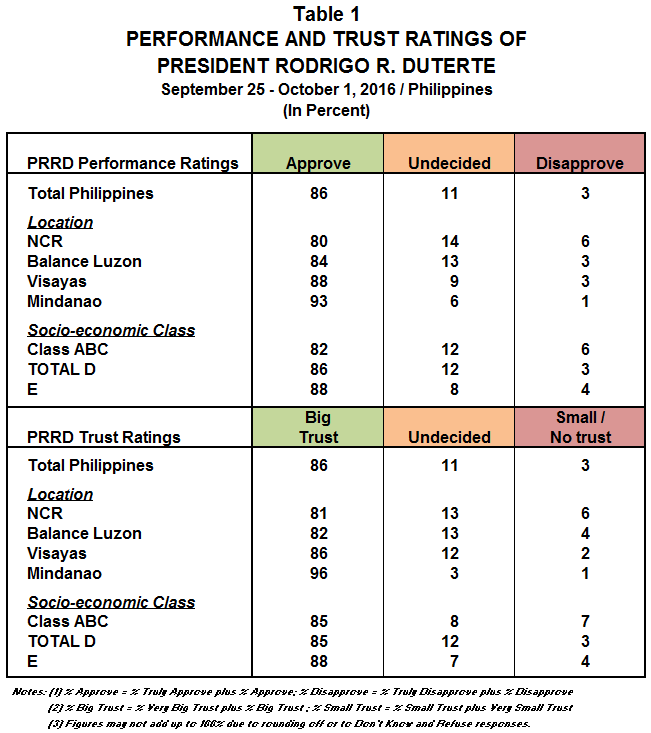 Big majority approval scores are enjoyed by the President in all geographic areas and socio-economic classes (80% to 93% and 82% to 88%, respectively). In contrast, single-digit disapproval ratings are recorded in these same subgroupings (1% to 6% and 3% to 6%, respectively). Indecision levels vary from 6% to 14% in the various geographic areas and from 8% to 12% in all socio-economic groupings.

Similarly, trust in the President is expressed by most of his constituents (86%). Only 3% distrust President Duterte while indecision on the matter of trusting or distrusting him is shared by 11% of Filipinos. Marginal movements occur in the President’s overall trust ratings between July and September 2016. Even the 5-percentage point decline in the latter’s national trust score is not considered significant as it falls with the survey’s overall error margin (+/- 3 percentage points). There are also no marked changes in presidential ratings across geographic areas and socio-economic classes at this time. (Please refer to Tables 1 to 2.) 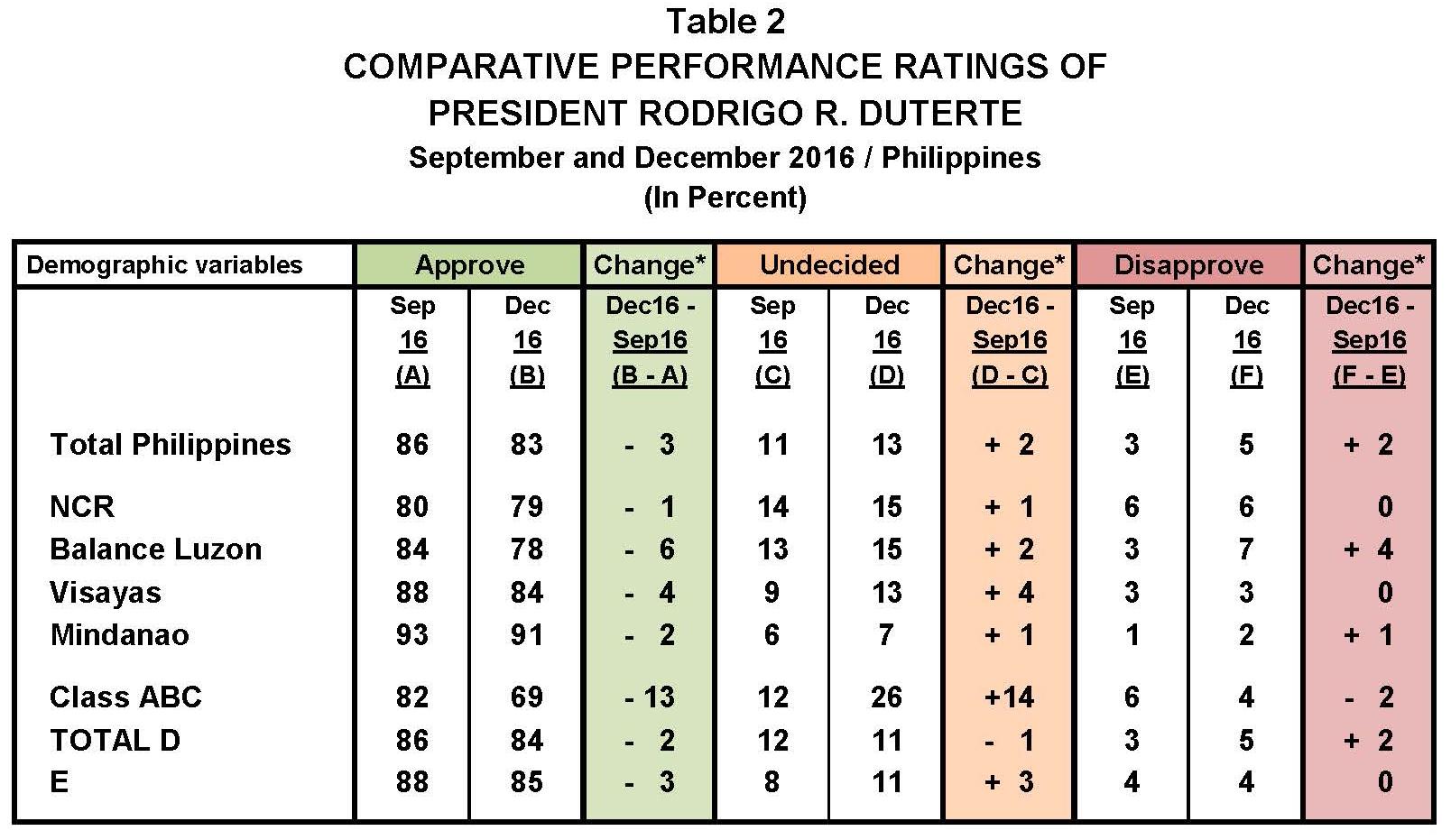 The predominant sentiment toward President Duterte in the different geographic areas and socio-economic groupings is one of trust (81% to 96% and 85% to 88%, respectively). The President registers single-digit distrust ratings across these subgroupings (1% to 6% and 3% to 7%, respectively). Ambivalence levels range from 3% to 13% in all geographic areas and from 7% to 12% across socio-economic classes. (Please refer to Table 1.)