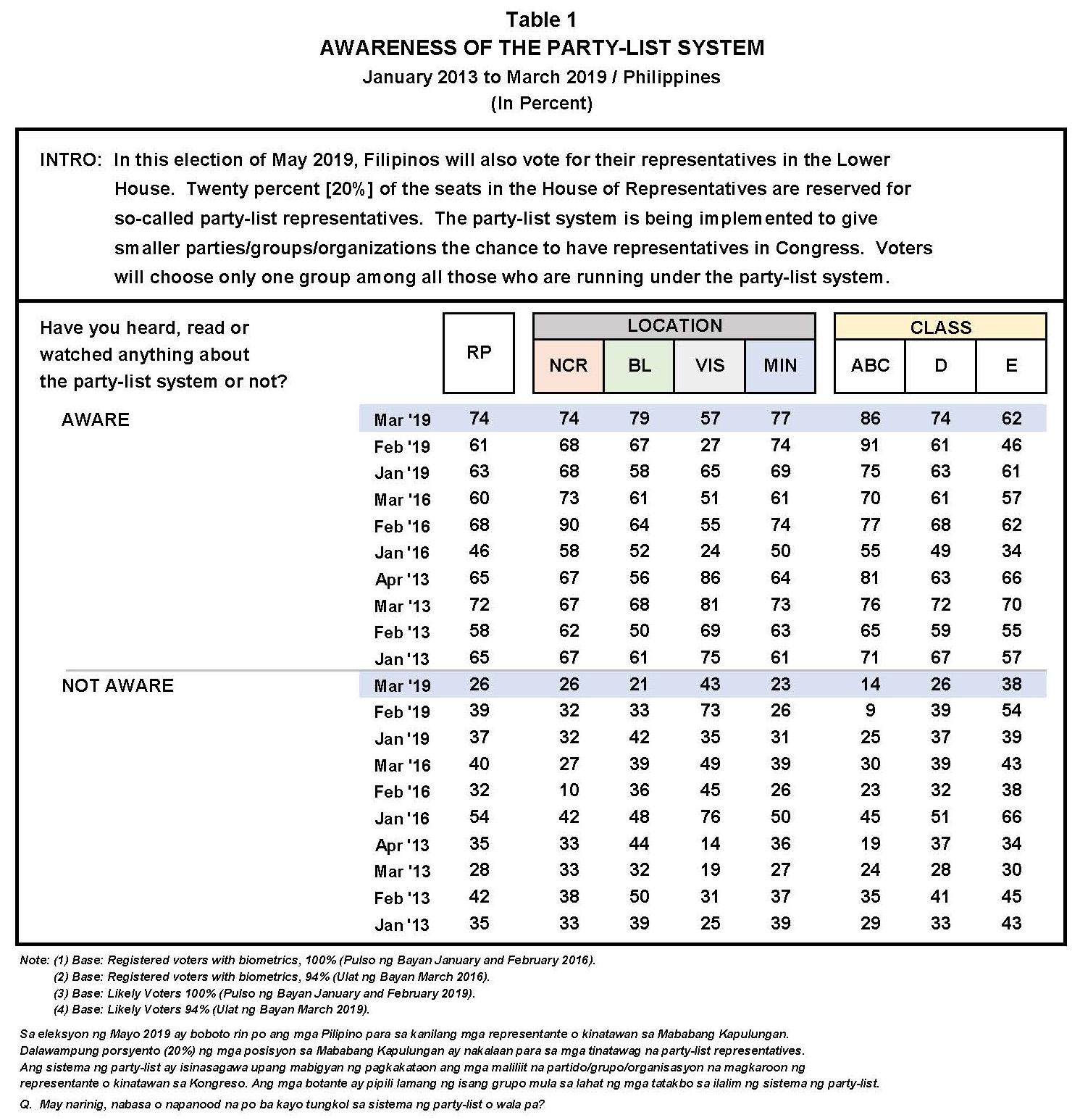 Pulse Asia Research, Inc. is pleased to share with you some findings on the May 2019 Elections for Party-List Representatives from the March 2019 Ulat ng Bayan national survey. We request you to assist us in informing the public by disseminating this information.

The survey fieldwork was conducted from March 23 – 27, 2019 using face-to-face interviews. In the weeks leading up to the fieldwork for this survey and during the actual conduct of the interviews, the following local and international developments dominated the headlines:

During the month of March 2019, the following are among the key developments that preoccupied Filipinos:

1. The water crisis experienced by the customers of Manila Water Company, Inc. (MWCI) as the La Mesa Reserve breached its critical level of 69 meters, preventing MWCI from meeting its daily demand of 150 million liters; MWCI Chairperson Fernando Zobel de Ayala and MWCI President Ferdinand dela Cruz issued apologies to their customers, announced a voluntary waiver of the minimum charge for March 2019 for all customers and a waiver of the entire water bill of those severely affected by the water shortage, and appealed to the public for their patience as the company continues to work overtime to remedy the situation; the call made by several lawmakers for the ouster of the top officials of the Metropolitan Waterworks and Sewerage System (MWSS) due to their failure to prevent the water supply shortage in Metro Manila; amidst the crisis, President Rodrigo R. Duterte threatened to scrap the concession agreements of the government with the MWCI and Maynilad as well as to fire the officials of MWSS if they fail to stisfactorily address the problem;

2. The statement of Department of Finance (DOF) Secretary Carlos Dominguez III that the water supply issues in Metro Manila could have been avoided had the construction of the Kaliwa Dam been pursued by previous administrations; while the MWSS said that the Kaliwa Dam project is already a done deal since it has already been approved by the National Economic and Development Authority (NEDA), various environmental groups and local residents continue to oppose the project and questions have also been raised concerning the Chinese loan for the construction of the dam;

3. The estimate made by the National Disaster Risk Reduction and Management Council (NDRRMC) that the damage to agriculture caused by El Niño has already reached P 2.86 B, with rice and corn farmers and the regions of SOCCSKSSARGEN and Bicol being hardest hit; a state of calamity has been declared in MIMAROPA, Zamboanga, SOCCSKSSARGEN, and the Bangsamoro Autonomous Region in Muslim Mindanao (BARMM);

4. The signing of the proposed P 3.7 T national budget by Senate President Vicente Sotto III and House Speaker Gloria Macapagal-Arroyo, with the former appealing to President Duterte to veto the so-called “unconstitutional” provisions in the national budget such as the P 75 B that were supposedly realigned by the Lower House to its members;

5. The admission by President Duterte that despite his administration’s “war on drugs”, the illegal drug trade in the country has worsened with the entry of foreign drug syndicates into the country; however, Philippine National Police (PNP) Chief Oscar Albayalde and Philippine Drug Enforcement Agency (PDEA) Director General Aaron Aquino clarified that the President’s observation may simply be due to the recent seizure of 442 kilos of shabu worth P 2.8 B in separate operations in Manila and Muntinlupa whereas in previous operations, only sachets of shabu were confiscated;

6. The clarification issued by Malacañang that Presidential Economic Adviser Michael Yang is not involved in the illegal drug trade as claimed by former PNP Senior Superintendent Eduardo Acierto in a report he submitted to the President and the Senate; Senator Panfilo Lacson and several opposition senatorial candidates have called on the Duterte administration to further investigate the matter since the individual involved is linked to the highest office of the Philippine government;

7. The release of another narco list by the President on 14 March 2019 that included a former mayor and 45 incumbent officials (i.e., mayors, vice-mayors, congressional representatives, and a provincial board member); the PDEA said this list is only part of a longer one that has 82 names but the inclusion of the other individuals on the longer list is still being validated; the PDEA also claims to have a separate narco list that includes the names of 31 celebrities; prior to the release of the list, the Commission on Elections (COMELEC), Senators Panfilo Lacson and Richard Gordon, and the Commission on Human Rights (CHR) urged the administration to file the appropriate charges against the so-called narco politicians instead of shaming them by releasing its list;

8. The filing by former Ombudsman Conchita Carpio-Morales and former Department of Foreign Affairs (DFA) Secretary Alberto del Rosario on 15 March 2019 of a complaint against Chinese President Xi Jinping before the International Criminal Court (ICC) alleging crimes against humanity for causing environmental damage in the South China Sea; some fisherfolks expressed fears that China will retaliate against them as a result of the complaint by disallowing them to fish in their traditional fishing grounds while others considered the act a “good move” because China continues to refuse to recognize the 2016 decision of the Permanent Court of Arbitration that the Philippines has exclusive sovereign rights over the West Philippine Sea;

9. The termination of the Philippines’ membership in the ICC on 17 March 2019, with critics of the Duterte administration expressing worry that this may result in the worsening of extrajudicial killings and the harassment of those in the opposition; nonetheless, Atty. Jude Josue Sabio, one of those who filed a complaint against President Duterte before the ICC, explained that the country’s withdrawal from the tribunal will not prevent the ICC from investigating the charges against the President since these were filed before the country’s withdrawal took effect;

10. The permanent cancellation of the peace talks between the Philippine government and the Community Party of the Philippines (CPP) following the termination of the appointments of members of the government peace panel; President Duterte referred to the communist rebels as “terrorists” and warned them that they would be shot by authorities if they continue to occupy lands illegally;

11. The statement made by the Department of Health (DOH) that as of the first week of March 2019, more than 16,000 cases of measles have been reported nationwide, of which 261 have died; a measles outbreak has been declared in Metro Manila, Central Luzon, CALABARZON, and Central and Western Visayas; the DOH also reported that dengue cases have reached more than 36,000 across the country, with 141 deaths; the epidemic threshold has been breached in the Cagayan Valley, MIMAROPA, the Cordillera Administrative Region (CAR), and Caraga while the number of cases in Bicol, Western Visayas, the BARMM, and the Davao region have exceeded the alert threshold;

12. The indictment of former DOH Secretary Janette Garin on eight (8) counts of reckless imprudence resulting in homicide arising from procedural lapses in the implementation of the P 3.5 B mass dengue immunization program of the Aquino administration; indicted along with the ex-DOH Secretary were 13 health officials and six (6) executives of Sanofi Pasteur, Inc.;

13. The appointment of Department of Budget and Management (DBM) Secretary Benjamin Diokno as the new head of the Bangko Sentral ng Pilipinas (BSP) and of Court of Appeals (CA) Associate Justice Amy Javier as the latest member of the Supreme Court (SC);

14. The sacking of Philippine Charity Sweepstakes Office (PCSO) General Manager Alexander Balutan over allegations of corruption in the issuance of Small Town Lottery (STL) franchises; the former PCSO official disputed Malacañang’s claim that he was fired by the President as he explained that he resigned because when he assumed office in 2016, he vowed that he will leave office if he is asked by anyone from the Office of the President or Congress to do something he cannot stomach;

15. In economic and financial news, the continuing increase in oil prices due to the tension in several oil-producing countries, with Department of Energy (DOE) Secretary Alfonso Cusi urging the public to utilize energy efficiently; the slight increase in the overall electricity rates charged by the Manila Electric Company (Meralco) due to the higher electricity cost in the spot market and the rise in other charges such as transmission cost and government taxes; and the increase in the tolls charged by the North Luzon Expressway Corporation in the amount of P 10 for the open system and P 0.18 per kilometer for the closed system effective 20 March 2019; the decline in the inflation rate from 4.4% in January 2019 to 3.8% in February 2019, according to the latest figures released by the Philippine Statistics Authority (PSA);

16. And in international news, the crash of a Boeing 737 MAX commercial plane in Ethiopia that killed all 157 passengers and crew members and the grounding of all Boeing 737 MAX airplanes around the world while the investigation into the cause of the crash is ongoing; the mosque shootings in Christchurch, New Zealand (NZ) on 15 March 2019 carried out by a lone gunman that resulted in the death of 50 individuals and injuries to 50 others and the reforms to the country’s gun laws announced by NZ Prime Minister Jacinda Ardern in the days following the attacks; and the physical defeat of the Islamic State of Iraq and Syria (ISIS) on 23 March 2019 by the US-backed Syrian Democratic Forces as ISIS lost its last stronghold in Syria.

As in our previous Ulat ng Bayan surveys, this nationwide survey is based on a sample of 1,800 representative adults 18 years old and above. It has a + 2.3% error margin at the 95% confidence level. Subnational estimates for the geographic areas covered in the survey have the following error margins at 95% confidence level: + 6.5% for Metro Manila, + 3.5% for the rest of Luzon, + 5.3% for Visayas and + 4.7% for Mindanao. Those interested in further technical details may refer to our website (www.pulseasia.ph)

Most Filipinos report awareness of the party-list system (74%)

Of the 134 COMELEC accredited party-list groups listed on the ballot, 14 party-list groups manage to get more than 2% support from the voters with party-list group preference, assuring each of them one seat in the House of Representatives in the first round of seat allocation described by the Supreme Court in a February 17, 2017 resolution.[1] (See Table 2, Electoral Preference of Party-list groups).

Following the procedure for allocating the maximum number of 59 seats[2] for party list representatives that is described in said resolution,  five party-list groups, namely: Bayan Muna; Magsasaka; Gabriela Women’s Party; Ako Bicol and, A Teacher, each garner the ceiling of three seats in the Lower House. 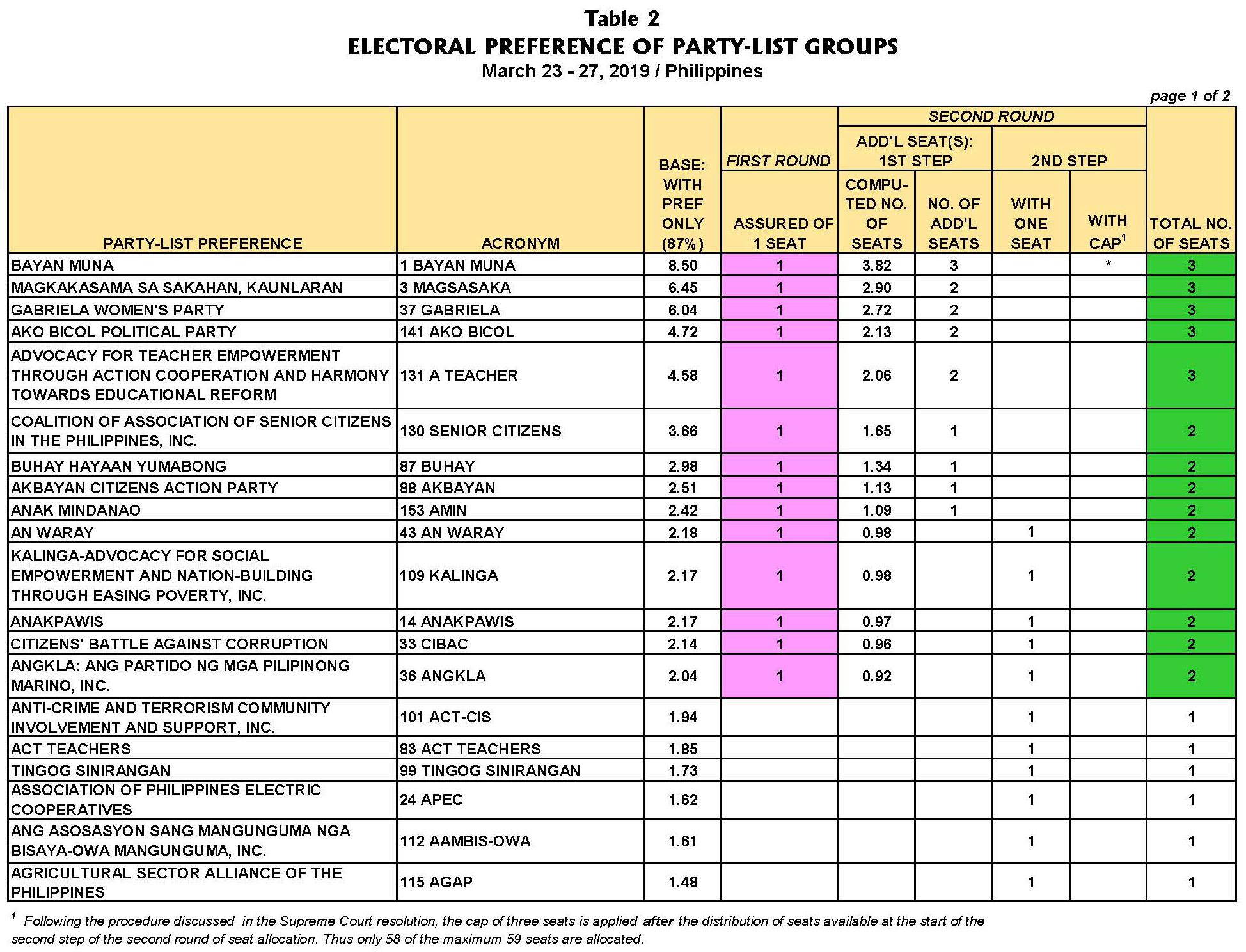 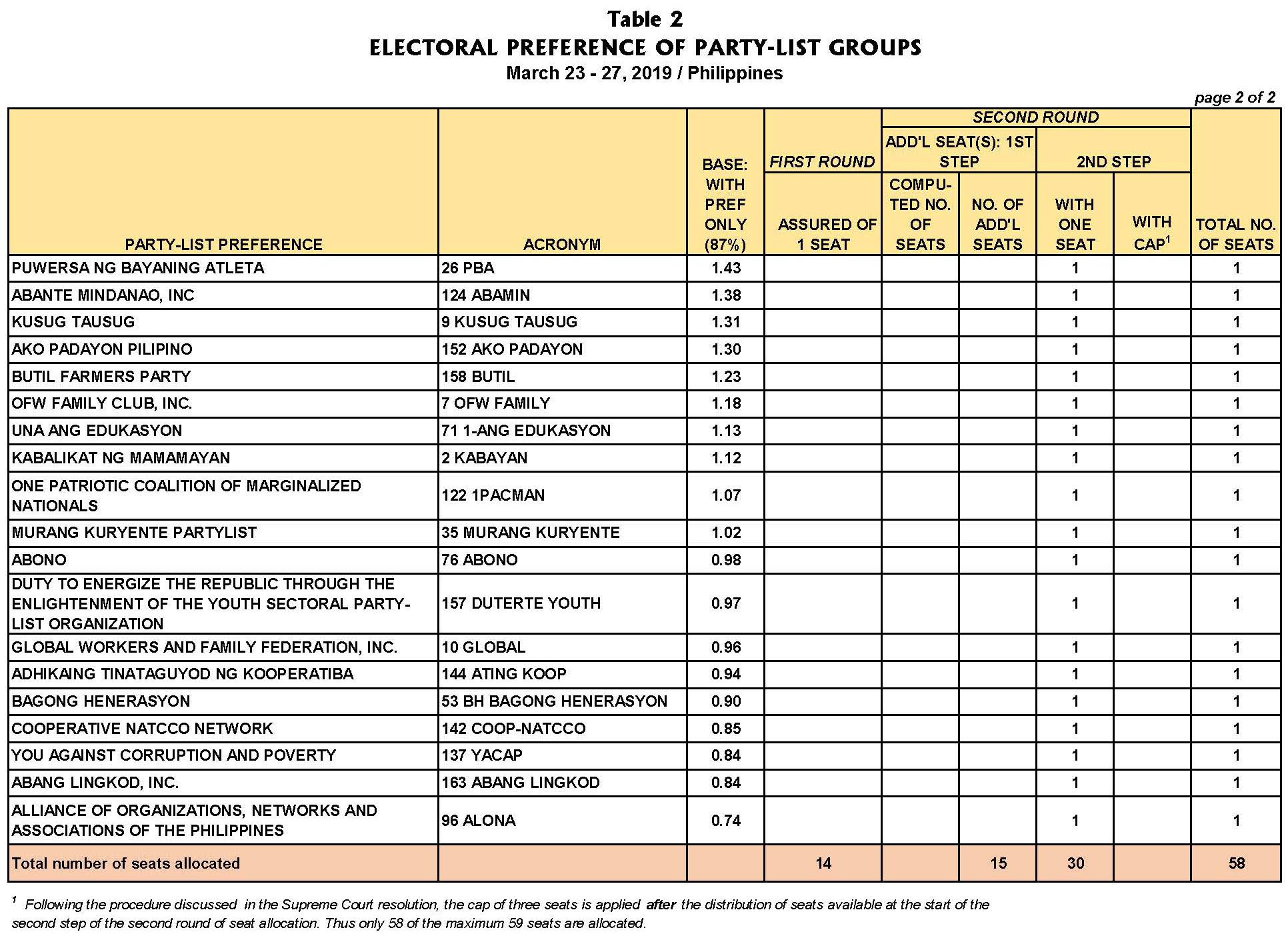 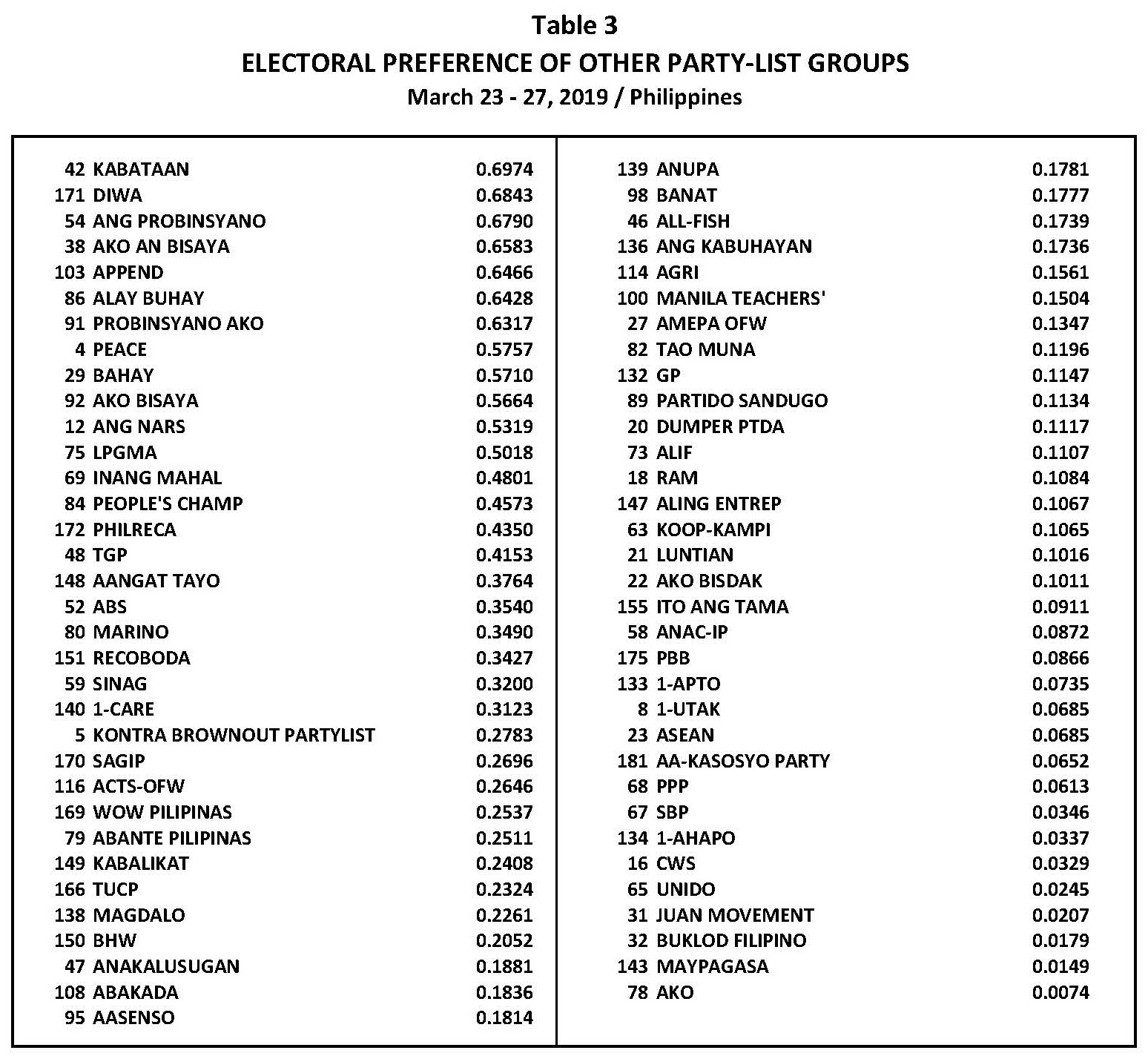