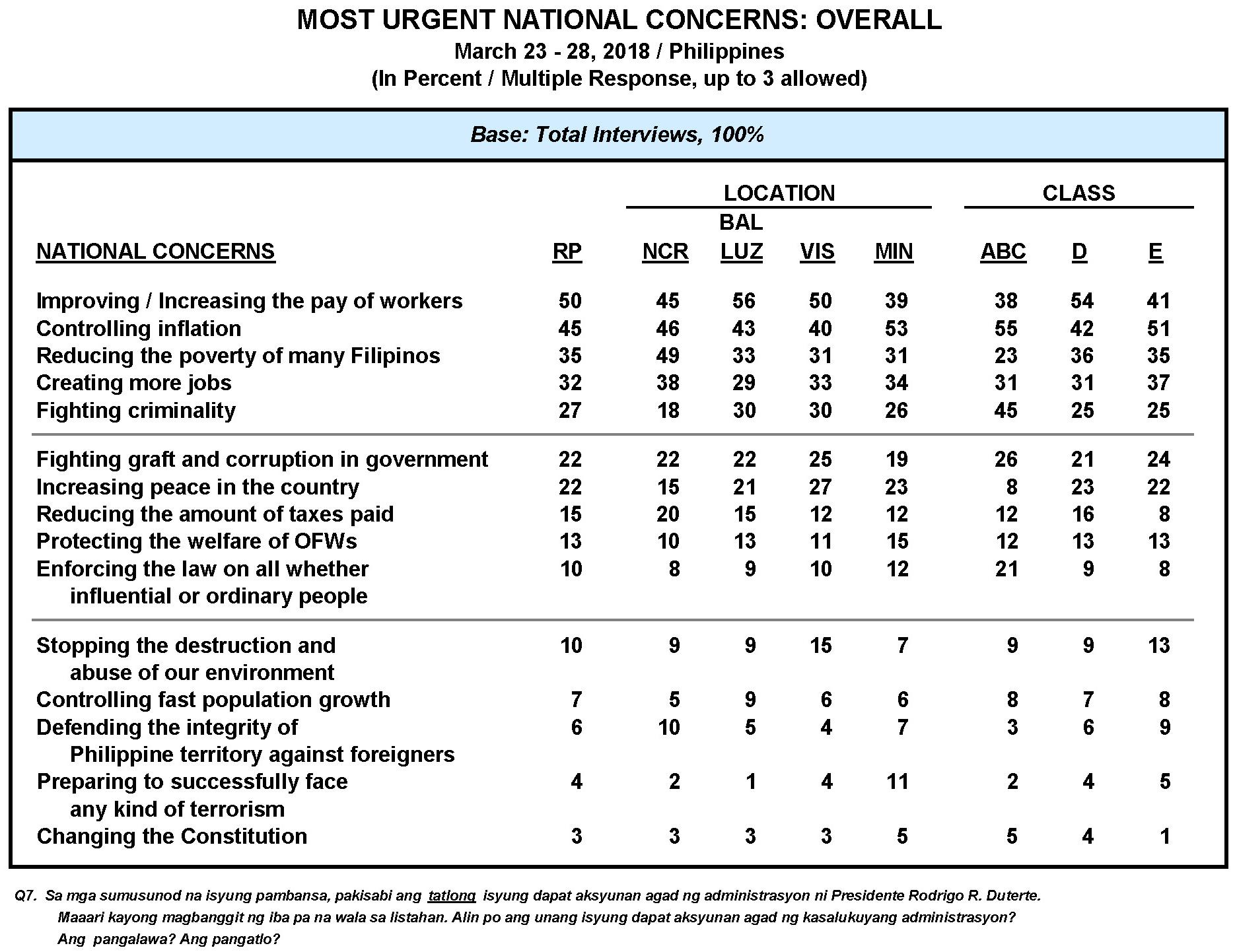 Pulse Asia Research, Inc. is pleased to share with you some findings on Urgent National Concerns and National Administration Performance Ratings on Selected Issues from the March 2018 Ulat ng Bayan national survey. We request you to assist us in informing the public by disseminating this information.

Filipinos continue to be most concerned about urgent concerns that are economic in nature – workers’ pay, inflation, poverty, and jobs

In March 2018, Filipinos are most concerned about increasing the pay of workers (50%) and controlling inflation (45%). A second set of urgent national concerns includes poverty reduction (35%) and job creation (32%). Fighting criminality (27%), fighting graft and corruption in government (22%), and promoting peace (22%) comprise a third group of concerns deemed urgent by Filipinos. Meanwhile, reducing the amount of taxes paid by Filipinos (15%), protecting the welfare of overseas Filipino workers (13%), enforcing the rule of law (10%), and protecting the environment (10%) make up a fourth cluster of urgent national concerns. At this time, Filipinos are least concerned about population growth (7%), national territorial defense (6%), terrorism (4%), and charter change (3%). (Please refer to Table 1.) 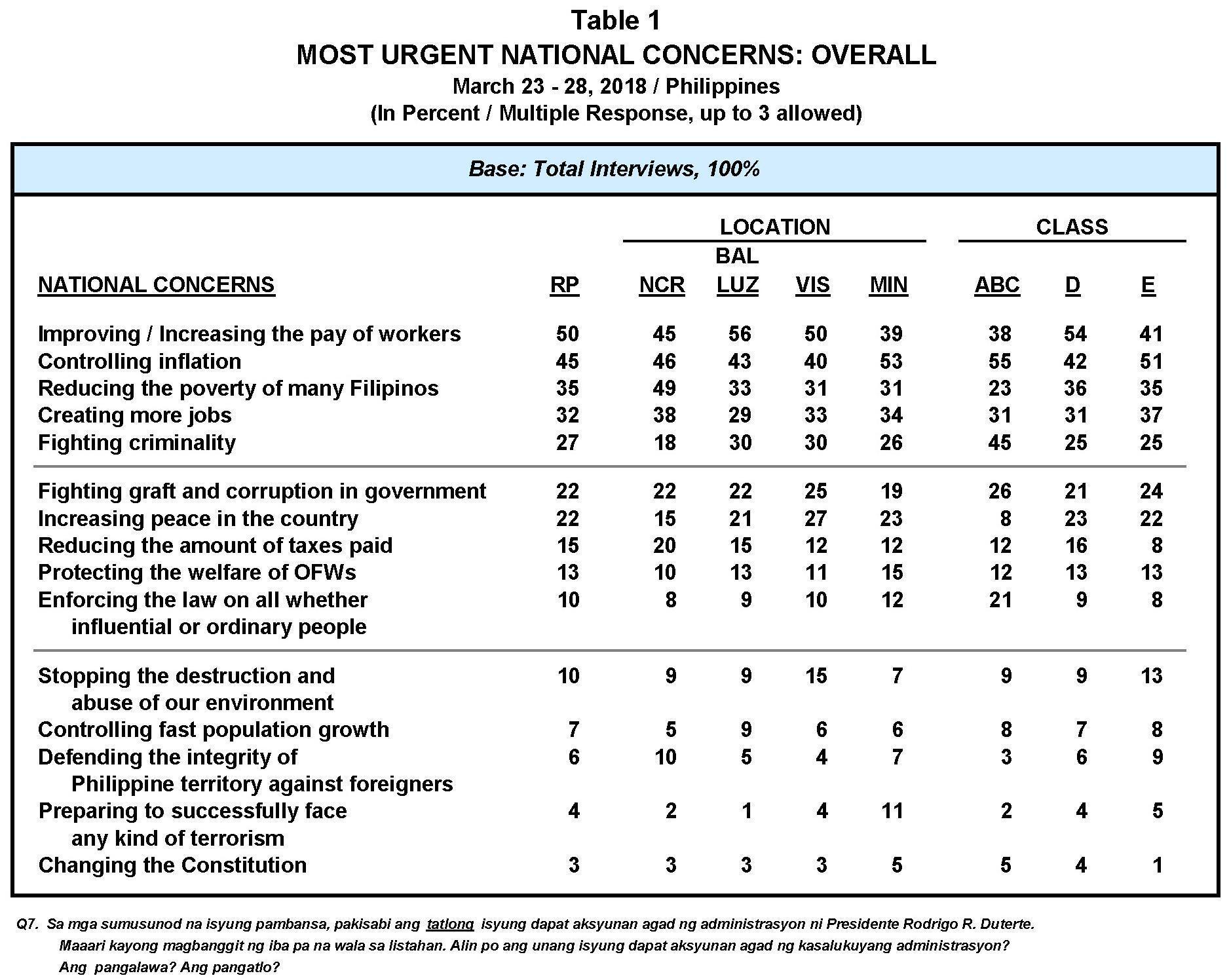 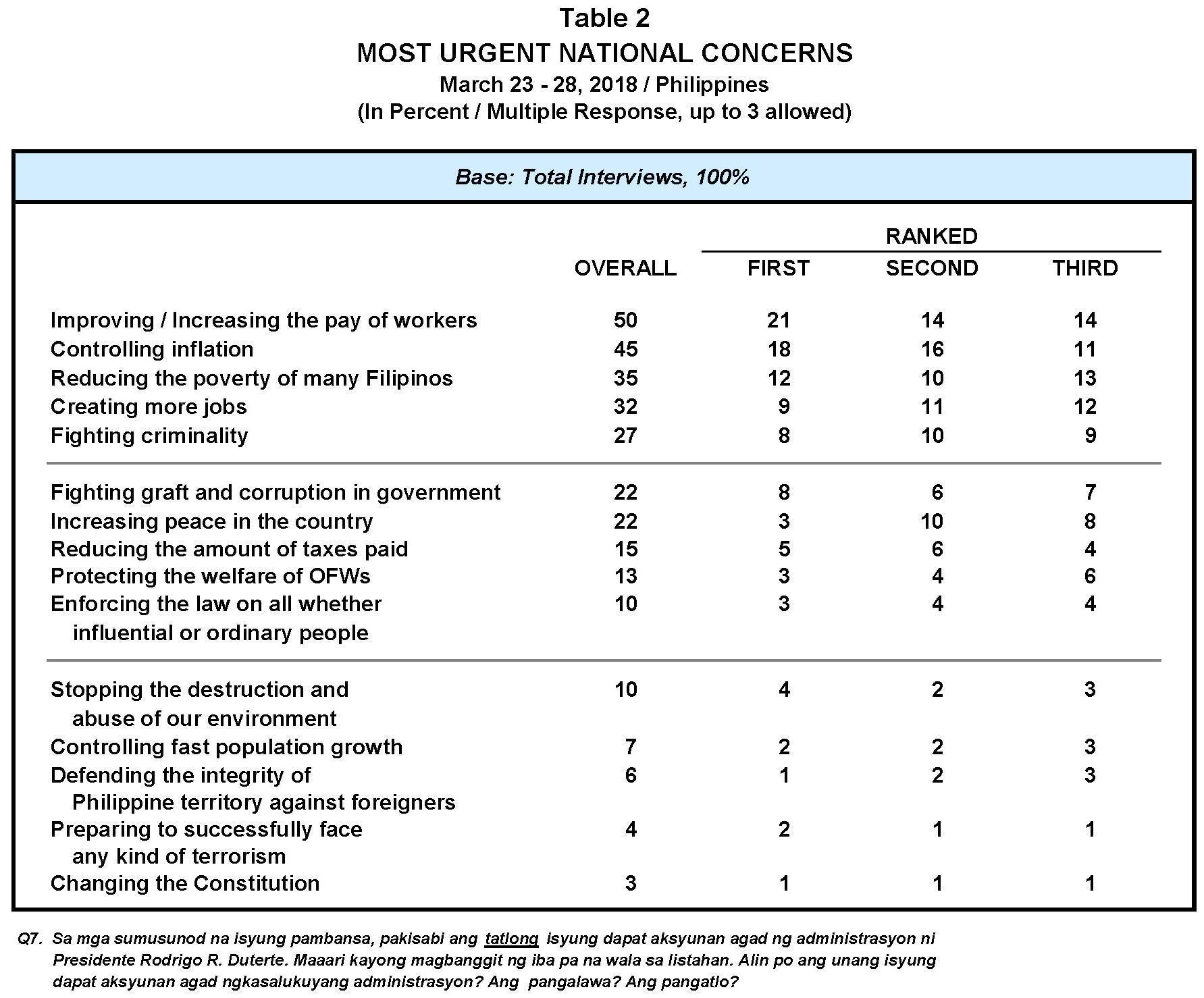 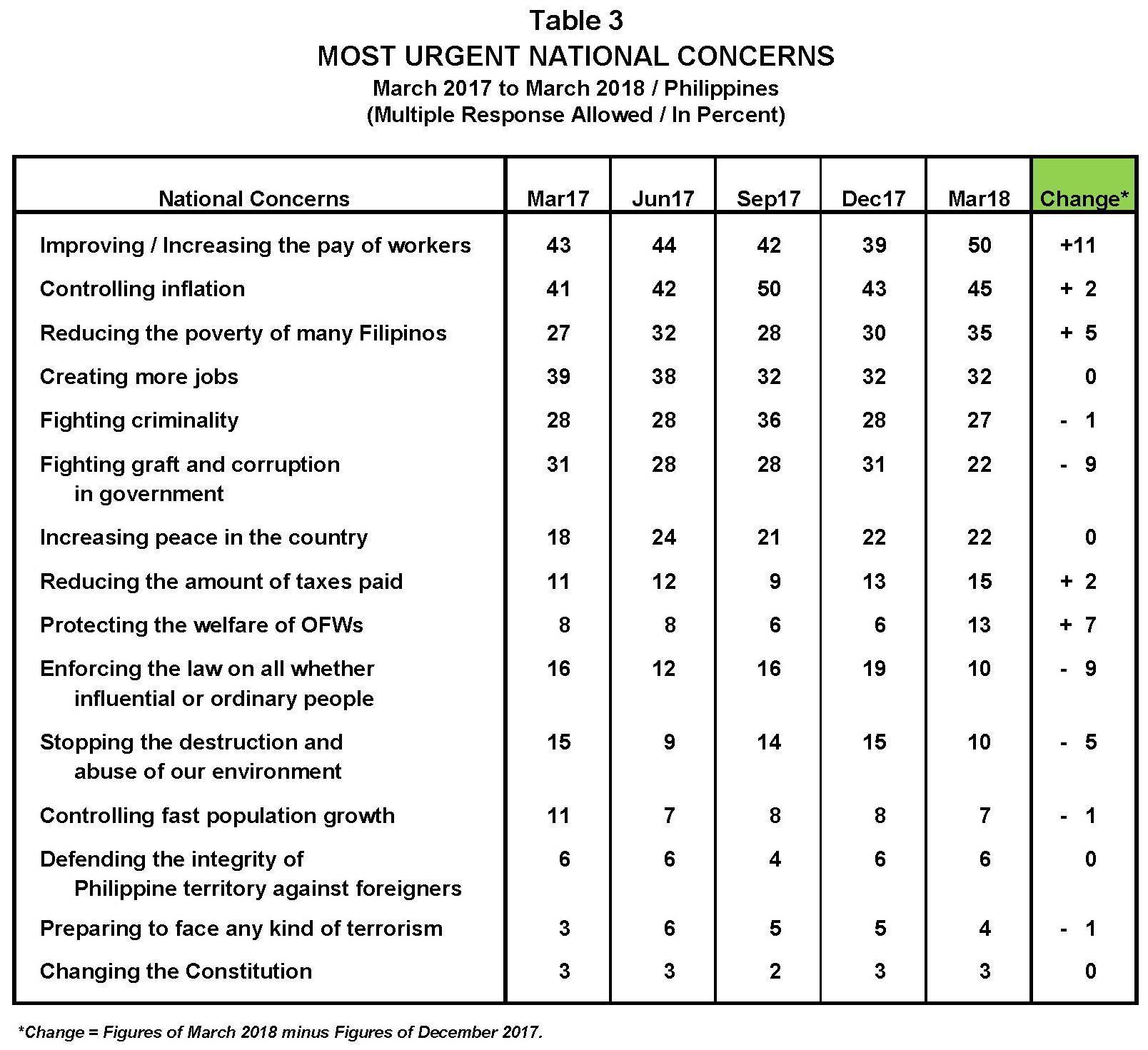 The Duterte administration enjoys majority approval ratings on 11 of the 12 selected national issues on which its performance is evaluated in this survey; Filipinos’ assessment of the national administration’s work remains essentially constant between December 2017 and March 2018

Filipinos are most appreciative of the incumbent administration’s efforts to respond to the needs of areas affected by calamities (86%), protecting the welfare of OFWs (84%), and fighting criminality (81%). Majority approval scores are also enjoyed by the Duterte administration for its work in the areas of promoting peace (71%), enforcing the rule of law (71%), protecting the environment (71%), fighting corruption in government (70%), increasing the pay of workers (68%), creating more jobs (67%), defending national territorial integrity (67%), and reducing poverty (53%). The only non-majority approval rating of the administration is recorded on the issue of inflation, for which it receives a 39% approval rating, a 33% disapproval score, and a 28% indecision figure. It may be recalled that inflation is an issue considered urgent by 45% of Filipinos. (Please refer to Table 4.)

While public disapproval is most pronounced towards the Duterte administration’s work in the area of controlling inflation (33%), single-digit disapproval ratings are recorded by the administration on the issues of disaster response (2%), protection of OFWs (4%), peace promotion (6%), criminality (7%), rule of law (7%), workers’ pay (8%), environmental protection (9%), and job creation (9%). Meanwhile, levels of indecision toward the administration’s performance on selected issues range from 12% on disaster response, protection of OFWs, and criminality to 29% on poverty reduction. 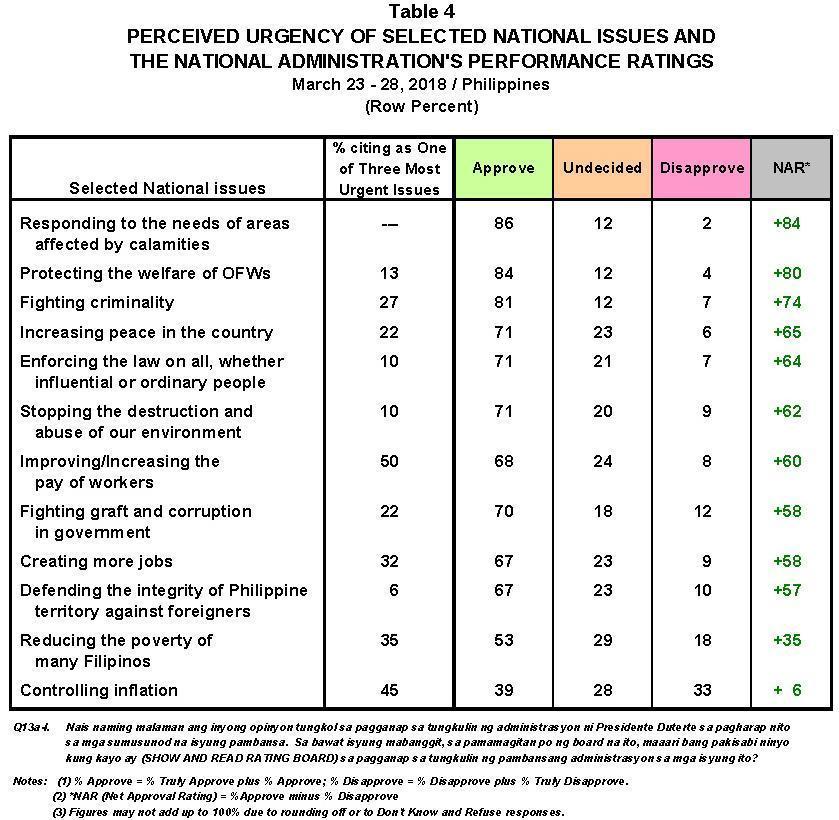 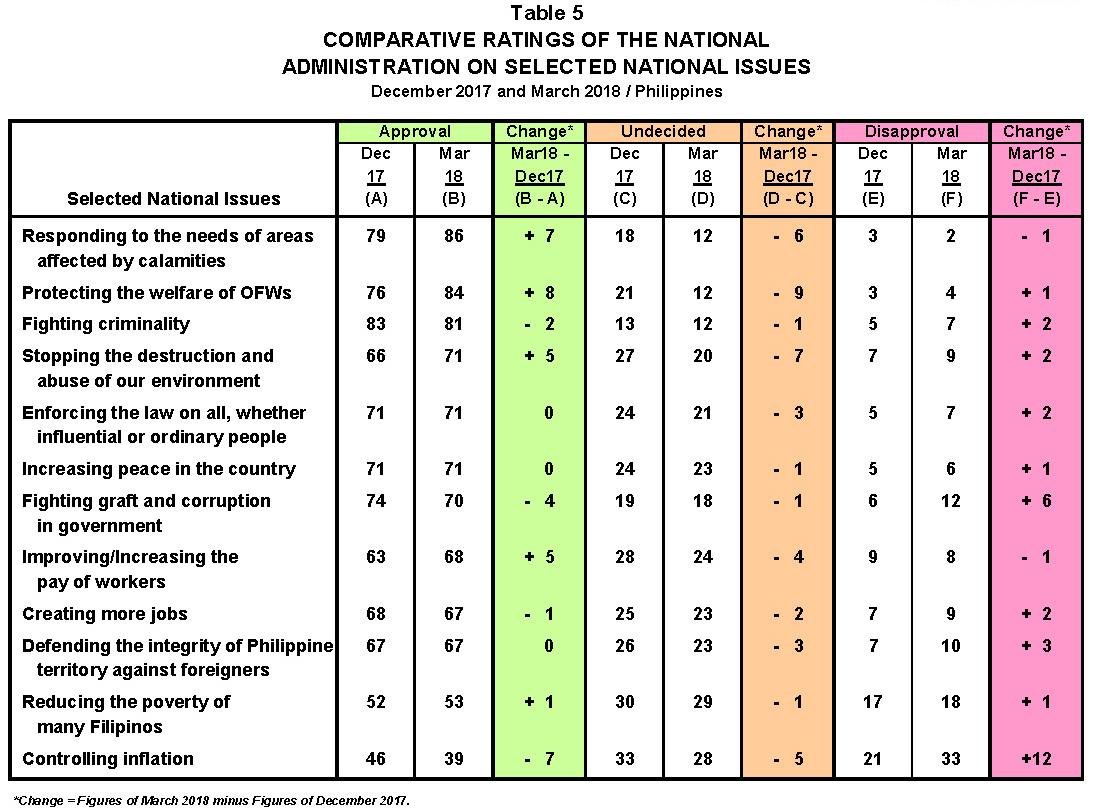