March 2018 Nationwide Survey on the May 2019 Senatorial Elections 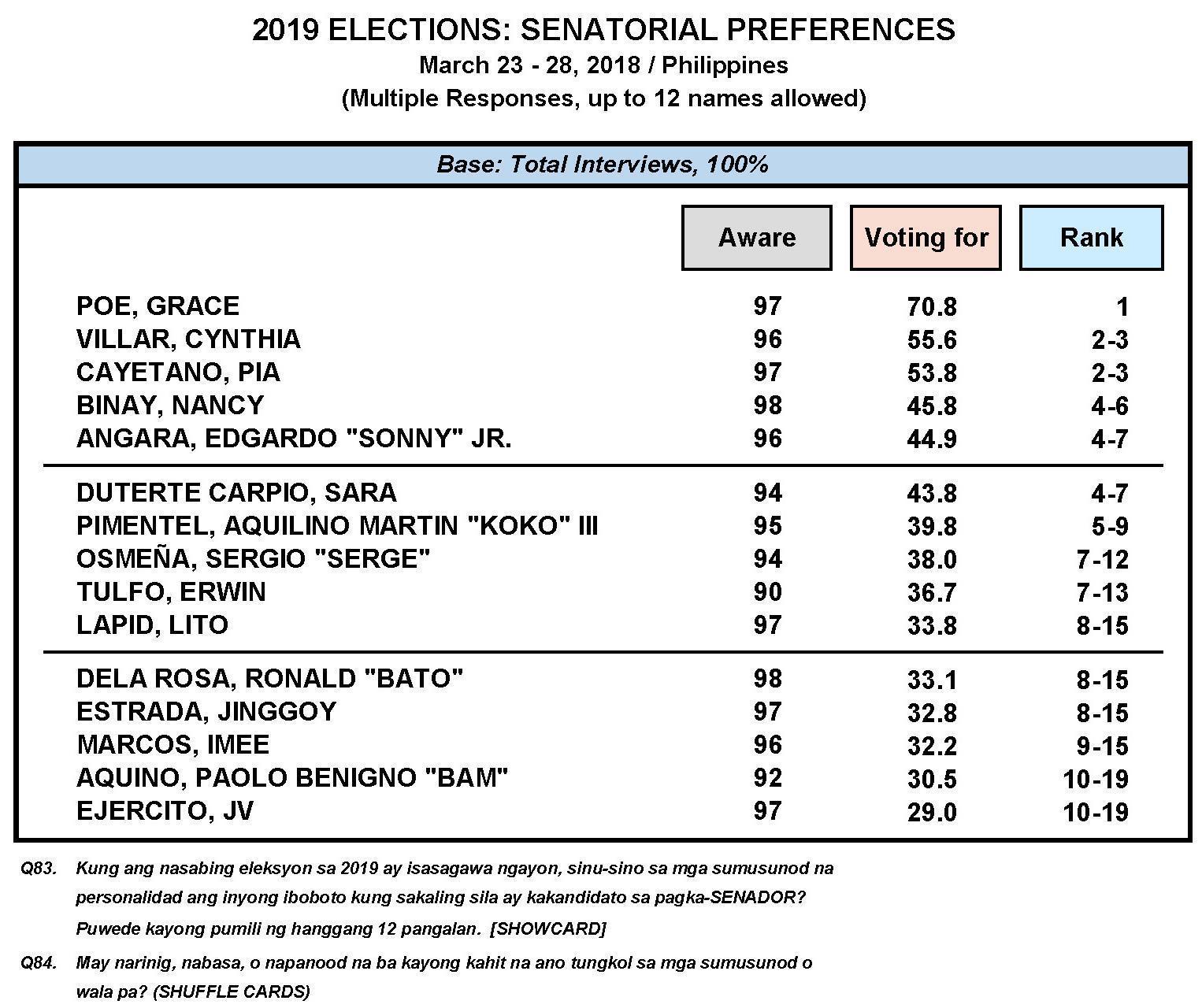 Pulse Asia Research, Inc. is pleased to share with you some findings on the May 2019 Senatorial Elections from the March 2018 Ulat ng Bayan national survey. We request you to assist us in informing the public by disseminating this information.

1.    The quo warranto petition filed by Solicitor General Jose Calida before the Supreme Court (SC) seeking to remove SC Chief Justice Maria Lourdes A. Sereno by questioning the validity of her appointment on the basis of her alleged failure to fully disclose her personal wealth; for her part, SC Chief Justice Sereno, who went on an “indefinite leave” beginning 01 March 2018, said the only way she can be removed from office is through impeachment as provided for by the 1987 Philippine Constitution; several militant lawmakers and concerned citizens have called on the SC to dismiss the petition which they consider to be unconstitutional;

2.    The approval by the Committee on Justice of the House of Representatives, through a vote of 33-1, of its report which finds probable cause to impeach SC Chief Justice Sereno for culpable violation of the 1987 Philippine Constitution, betrayal of public trust, and corruption; Senate President Aquilino Pimentel III has assured the SC Chief Justice of a fair trial should the impeachment trial materialize; calls for her resignation have been made by several groups of judges and court employees but these have been rejected by SC Chief Justice Sereno because resigning would only erode the High Court’s independence;

3.    The order of Department of Justice (DOJ) Secretary Vitaliano Aguirre II to cancel the 20 December 2017 resolution by DOJ prosecutors to dismiss the drug charges against Peter Lim, Rolando Espinosa, Jr., and Peter Co; a new panel of prosecutors has been formed to review the original resolution and receive new evidence submitted by all concerned parties;

4.    The Philippines’ withdrawal from the International Criminal Court (ICC) following what President Rodrigo R. Duterte referred to as the “outrageous” attacks made by some officials of the United Nations (UN) against his anti-illegal drugs campaign; nonetheless, critics say, this move does not mean that the ICC’s investigation into the Duterte administration’s “war on drugs” will automatically cease;

5.    The provisional acceptance into the witness protection program of Ms. Janet Lim-Napoles, who is being tried for plunder in connection with the P 10-B pork barrel scam; the latter requested for a transfer from the custody of the Bureau of Jail Management and Penology to the DOJ because of reported intimidation, harassment, and threats against her; the DOJ’s clarification that should Ms. Napoles become a state witness in possible new cases, this would not exonerate her from her involvement in the pork barrel scam;

6.    The recommendation made by an inter-agency government task force to close Boracay Island for a 6-month period beginning 26 April 2018 to allow for environmental rehabilitation efforts to be carried out in the area; resorts owners in other provinces pledged to carry out similar initiatives following the closure recommendation;

7.    The filing of plunder charges against former Bureau of Immigration (BI) Commissioners Al Argosino and Michael Robles and retired Senior Supt. Wenceslao Sombero, Jr. in connection with the alleged attempt to extort P 50 M from a gambling tycoon in 2016;

8.    The President’s support for joint exploration or “co-ownership” of the West Philippine Sea between the Philippines and China which, according to maritime law experts, would be tantamount to giving up the country’s claims over disputed territories in the area if such initiatives are not governed by Philippine laws;

9.    The granting of subpoena powers to the PNP Chief and the top officials of the PNP-Criminal Investigation and Detection Group (CIDG), through the President’s signing of Republic Act No. 10973, with the objective of speeding up criminal investigations; human rights groups criticized the move which they fear will only lead to more abuse on the part of the police particularly in connection with its role in the administration’s campaign against illegal drugs;

10.    The continuing hearings on fake news at the Senate which saw Senator Grace Poe and Presidential Spokesperson Harry Roque clashing over the lawmaker’s proposal to prohibit government officials and state employees from spreading fake news; the Palace Spokesperson said that the bill, among others, violates equal protection under the law because it singles out those in government for spreading fake news;

11.    Former President Benigno S. Aquino’s appearance before the Commission on Elections (COMELEC) in connection with the preliminary hearing regarding the charges of electioneering filed against him arising from his administration’s dengue vaccination program;

12.    The apology issued by Facebook Chief Executive Officer (CEO) Mark Zuckerberg over the data breach involving more than 50 million Facebook accounts and which allowed a UK-based data mining and analytics company to make use of such data in connection with the electoral campaign of United States (US) President Donald J. Trump in 2016; and

13.    In economic and financial news, the increase in oil prices prior to the Lenten break following remarks by Saudia Arabia’s Energy Minister regarding the need for the Organization of the Petroleum Exporting Countries (OPEC) and its allied producers to coordinate supply cuts until 2019; the 5.85% decline in the Philippine Stock Exchange index (PSEi) for the month of March 2018 due to global trade concerns and increasing interest rates; the increase in the headline inflation rate by 3.9% between January and February 2018 (based on 2012 prices), the fastest increase since August 2014, as a result of the rise in the prices of food and beverage as well as alcoholic beverages and tobacco products; and the increase in the power rates of the Manila Electric Company (Meralco) due to greater demand for electricity as the summer season begins.

More than half of Filipinos (57%) already support 12 senatorial bets for the May 2019 elections; Senator Grace Poe is the leading candidate (70.8%)

Even with the midterm elections more than a year away, 57% of Filipinos already have 12 preferred senatorial candidates for the elections of May 2019. Majority figures obtain in virtually all geographic areas and socio-economic groupings (53% to 68% and 59%, respectively), with the exception of Metro Manila and Class ABC (42% and 41%, respectively). Additionally, Filipinos are naming a mean of 10 and a median of 12 (out of a maximum of 12) of the probable senatorial bets they plan to vote for in May 2019. (Please refer to Table 1.) 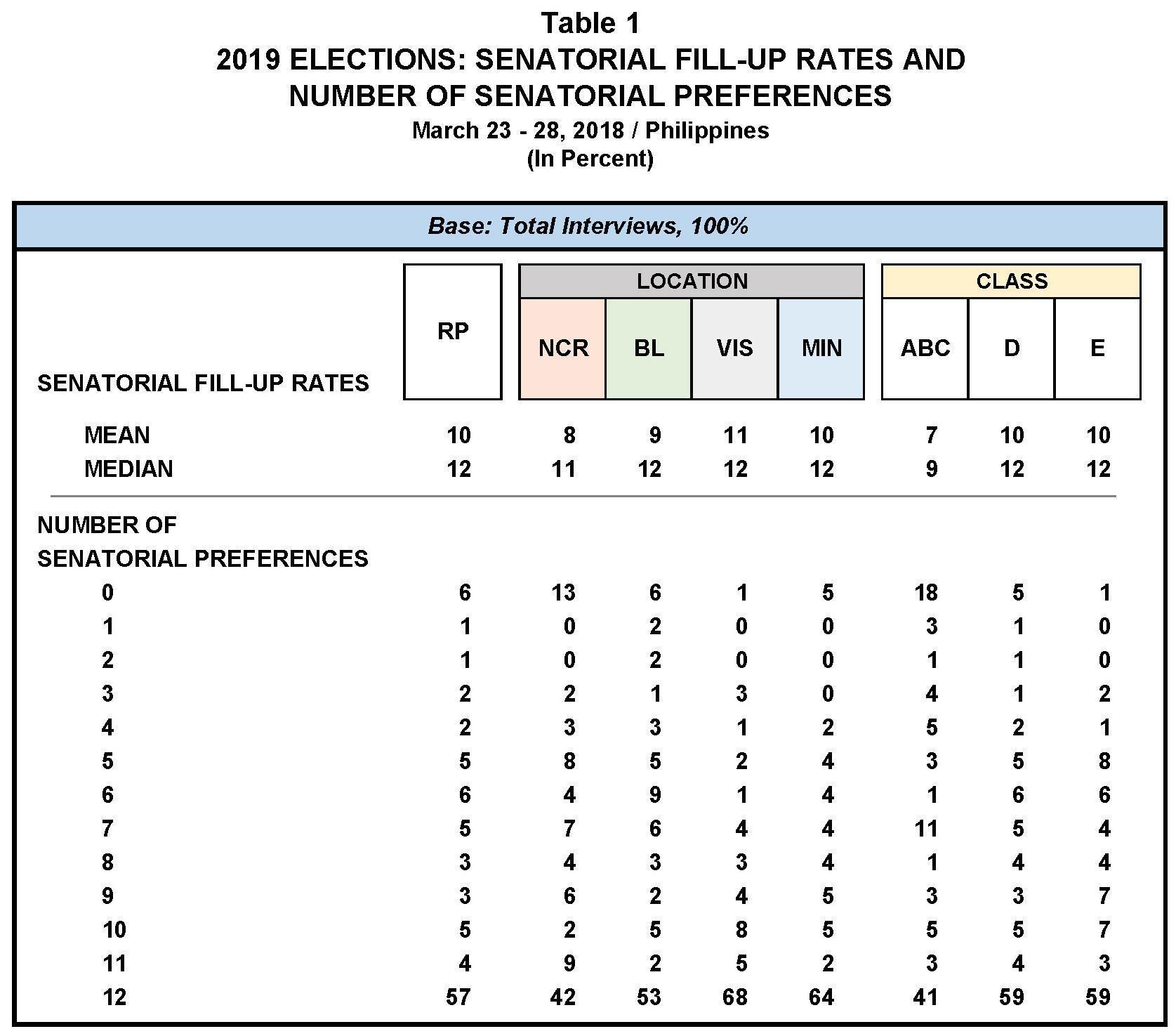 If the next senatorial elections were held during the survey period, only 15 of the 58 individuals included in the survey’s senatorial probe would have a statistical chance of winning. Most of the probable winners are either incumbent or former members of the Senate. Currently leading the May 2019 senatorial race with a statistical ranking of solo 1st place is Senator Grace Poe (70.8%). In 2nd to 3rd places are Senator Cynthia Villar (55.6%) and Taguig City Representative Pia Cayetano (53.8%). Senator Nancy Binay lands in 4th to 6th places (45.8%) while Senator Edgardo Angara, Jr. (44.9%) and Davao City Mayor Sara Duterte Carpio (43.8%) share 4th to 7th places.  For his part, Senate President Aquilino Martin Pimentel III finds himself in 5th to 9th places (39.8%). (Please refer to Table 2.) 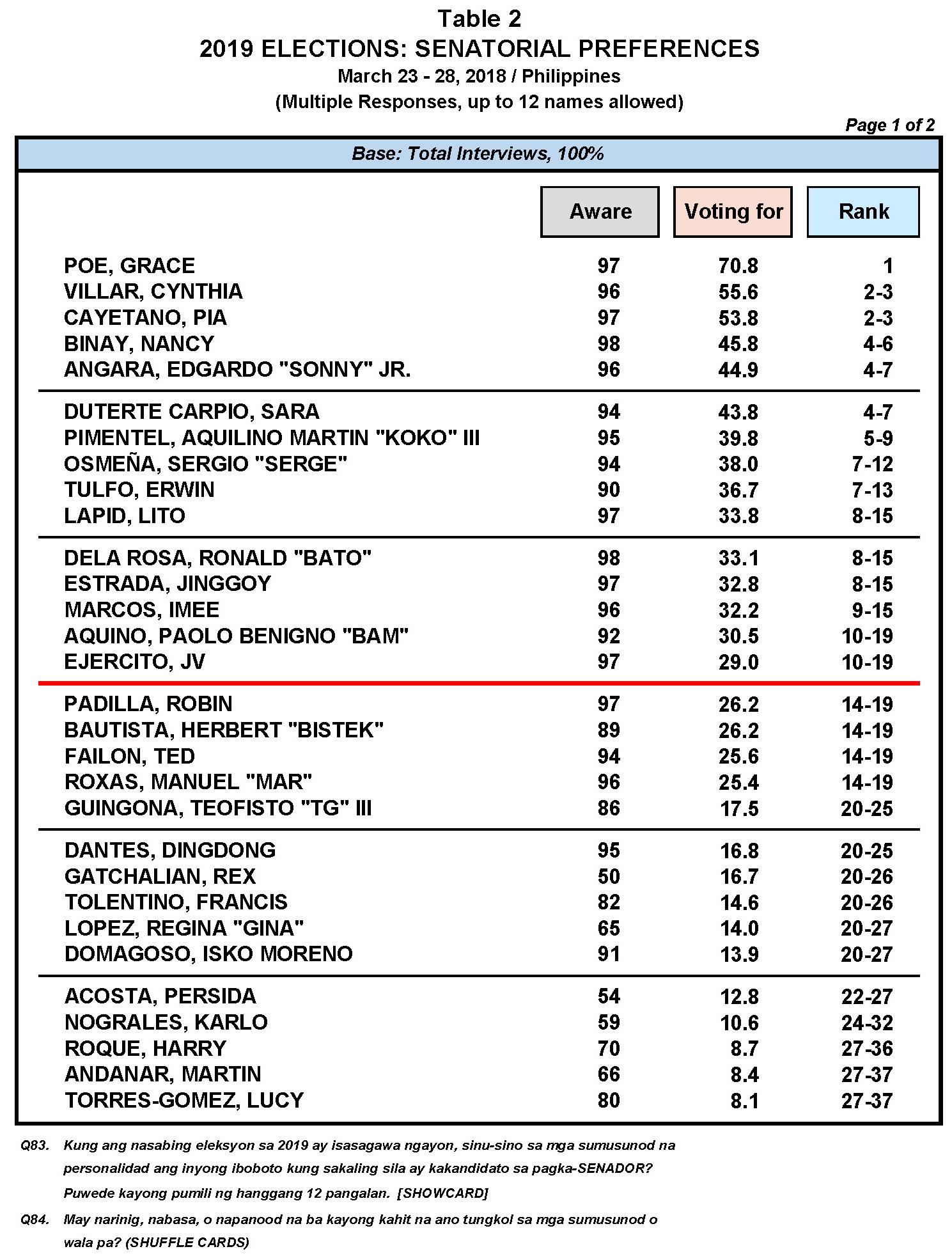 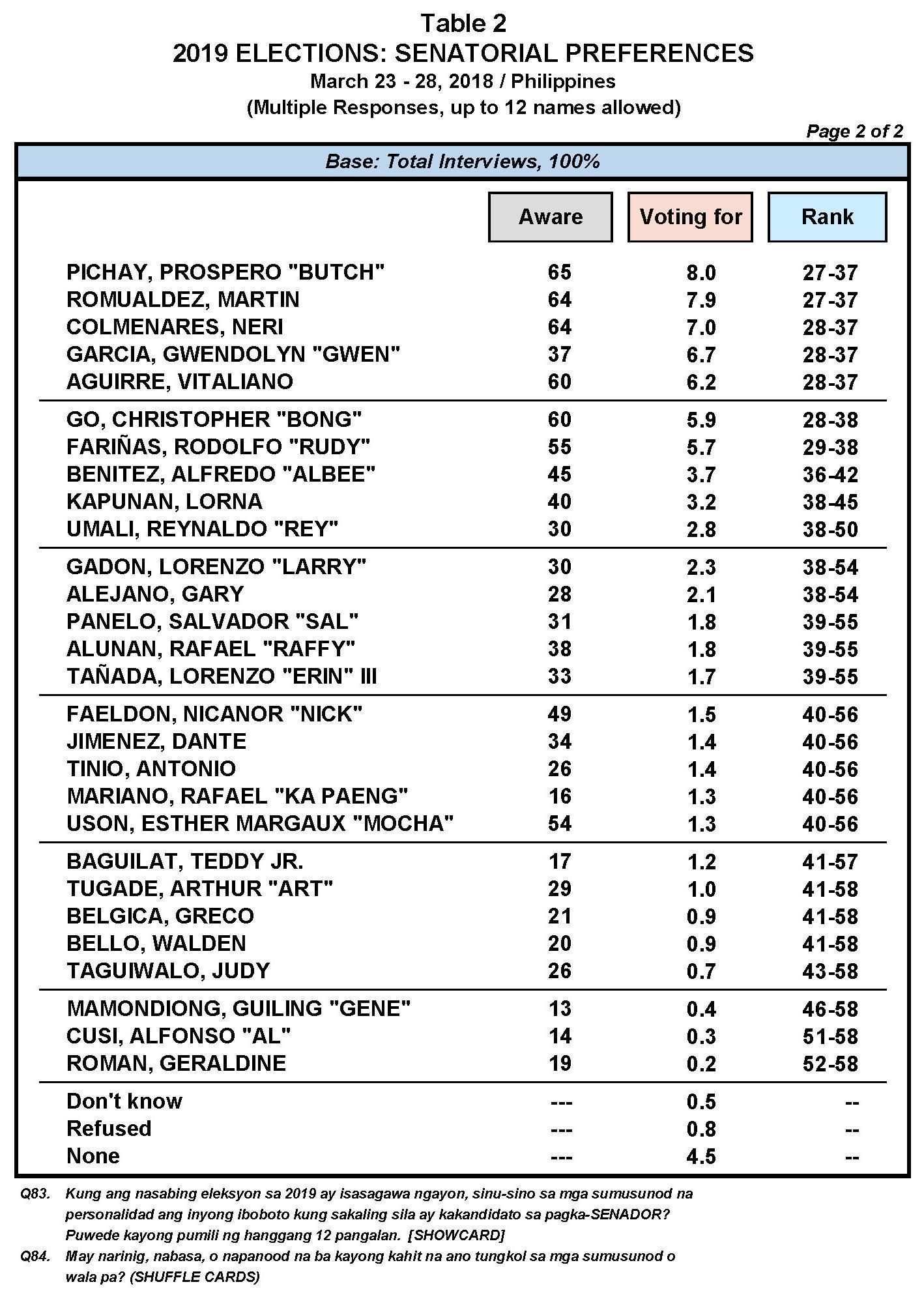