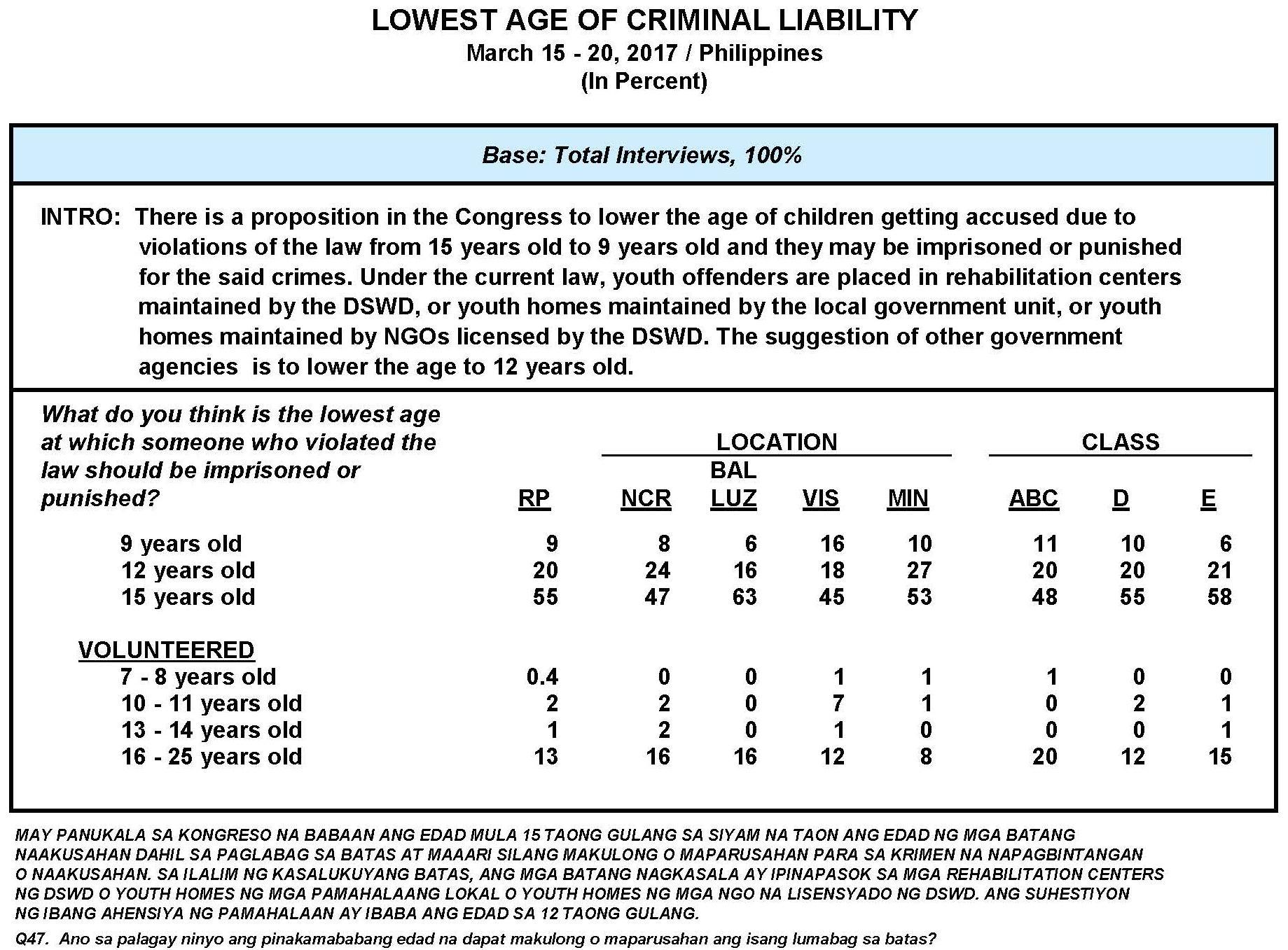 Pulse Asia Research, Inc. is pleased to share with you some findings on Minimum Age of Criminal Liability and the Death Penalty from the March 2017 Ulat ng Bayan national survey. We request you to assist us in informing the public by disseminating this information.

For most Filipinos (55%), the lowest age of criminal liability in the Philippines should be retained at 15 years old 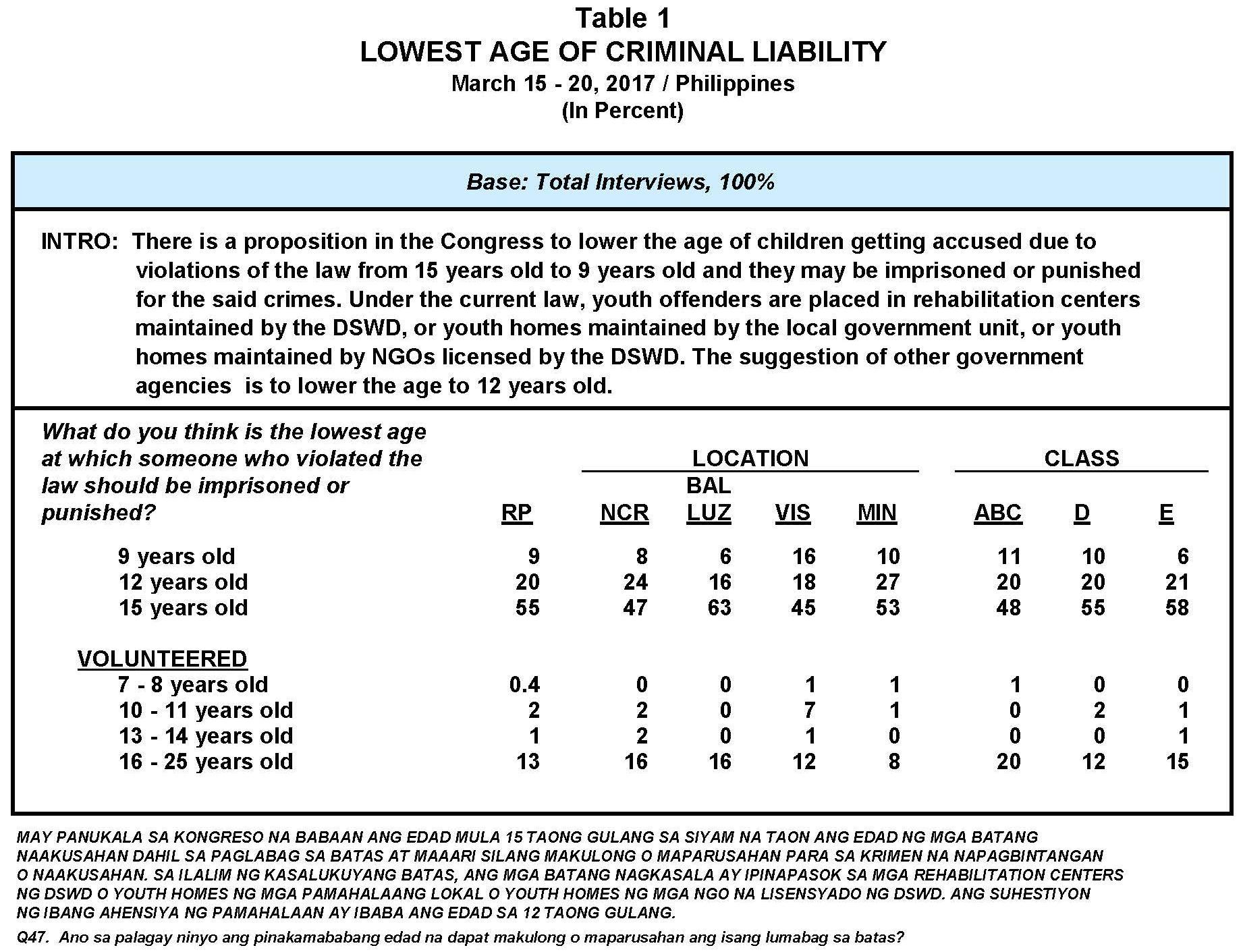 In March 2017, the predominant sentiment among Filipinos (67%) is one of support for the death penalty. This figure is lower than the level of support recorded by Pulse Asia Research in July 2016 (81%). This view is expressed by majorities in every geographic area and socio-economic grouping (61% to 74% and 66% to 68%, respectively). Opposition to the death penalty is expressed by a quarter of Filipinos (25%) while the rest (8%) are unable to say whether they support or do not support capital punishment. (Please refer to Table 2.) 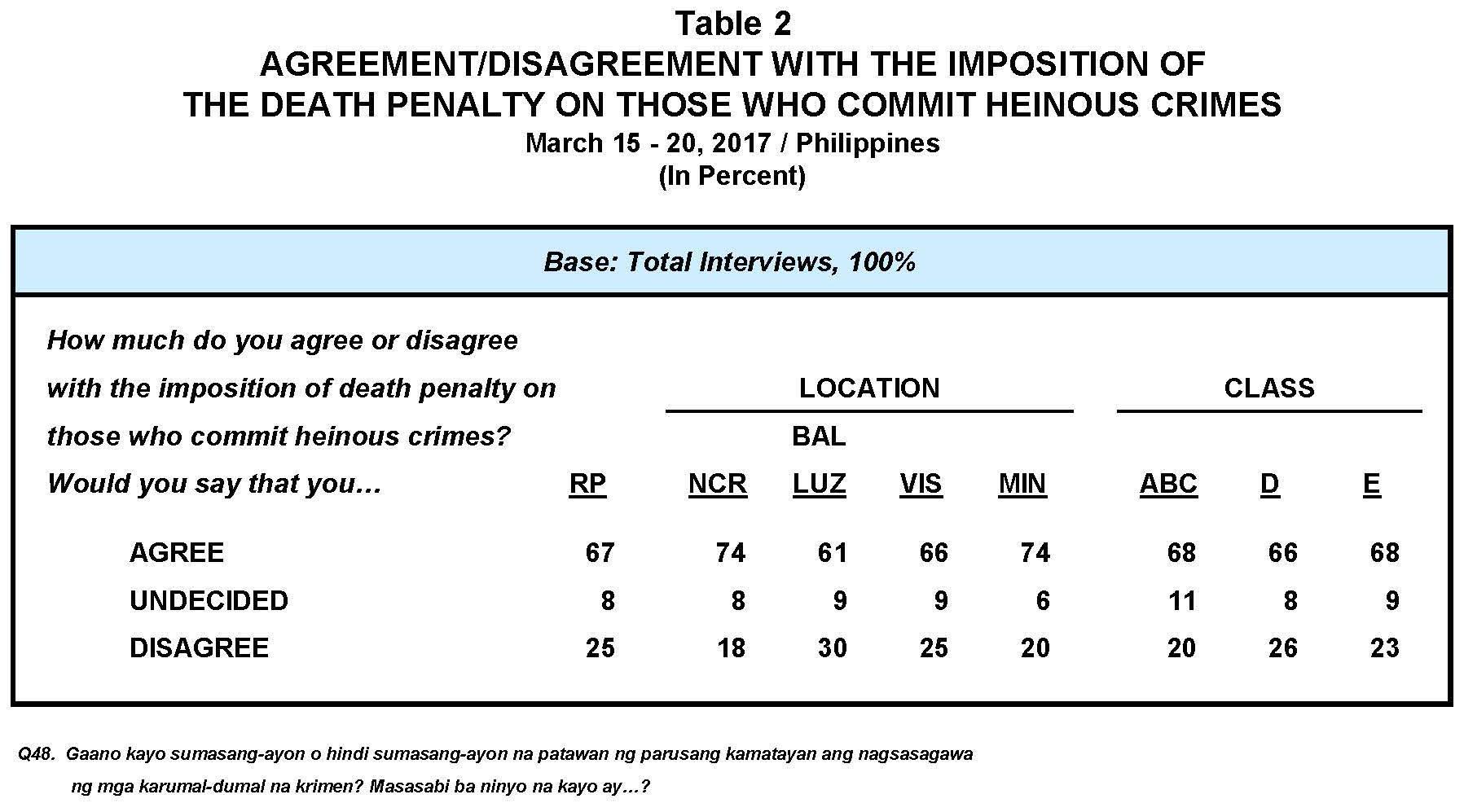 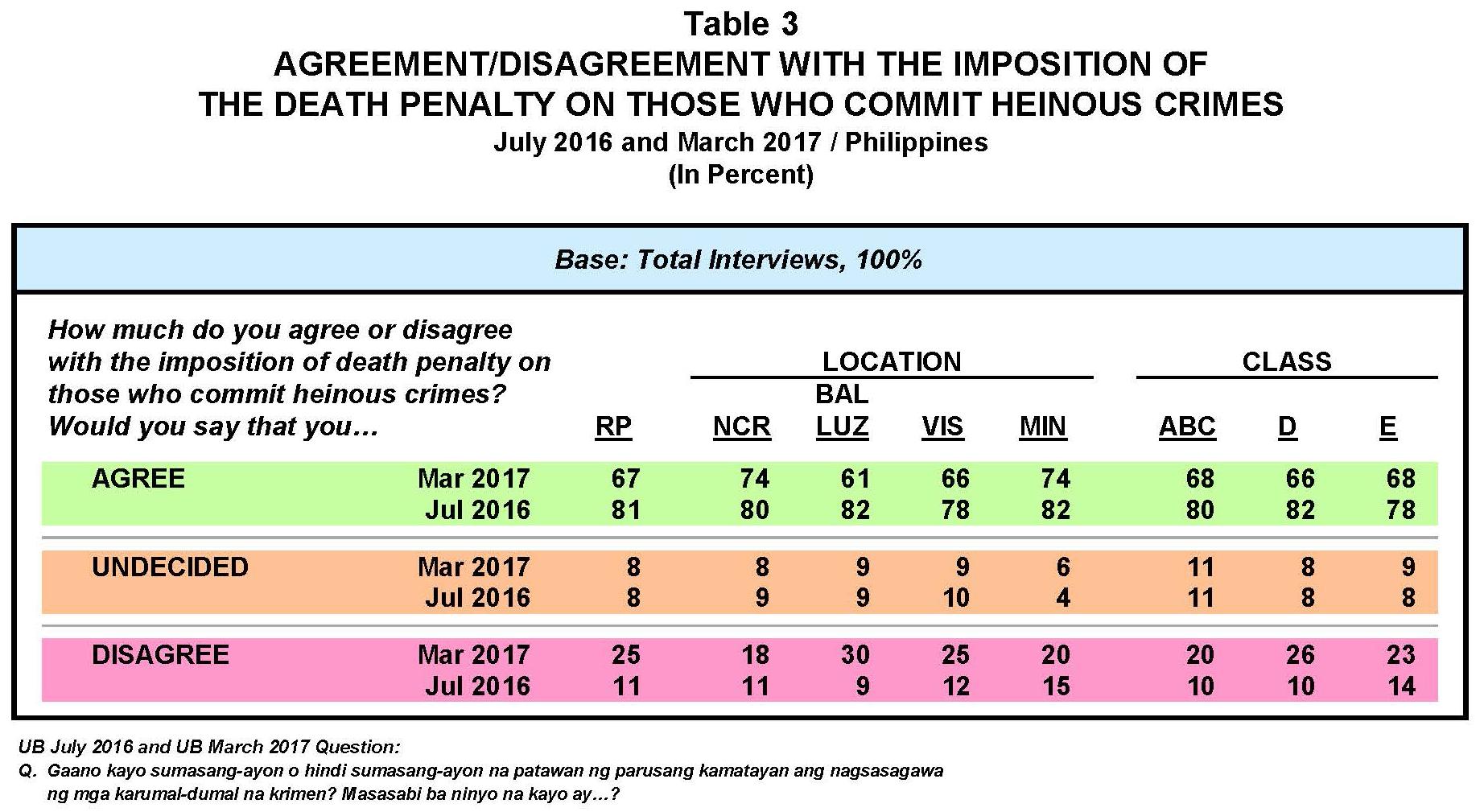 Among those who are pro-capital punishment, the most often cited crime which should be made punishable by death is rape (97%); few changes in public opinion on this matter may be noted between July 2016 and March 2017

As far as most of those in favor of the death penalty are concerned, rape (97%), murder (88%), and drug pushing (71%) are among the crimes which ought to be made punishable by death. Majorities across geographic areas and socio-economic classes say those found guilty of rape (96% to 99% and 94% to 100%, respectively), murder (74% to 95% and 84% to 92%, respectively), and drug pushing (61% to 81% and 66% to 77%, respectively) should be given the death penalty. Fewer Filipinos supportive of the death penalty think kidnap-for-ransom (46%) and plunder (33%) should be covered by such punishment. However, most Metro Manilans (55%), Visayans (59%), and those in Class ABC (57%) support the imposition of capital punishment for kidnap-for-ransom and plunder while a bare majority of those in Class ABC (51%) are in favor of the death penalty in plunder cases. (Please refer to Table 4.) 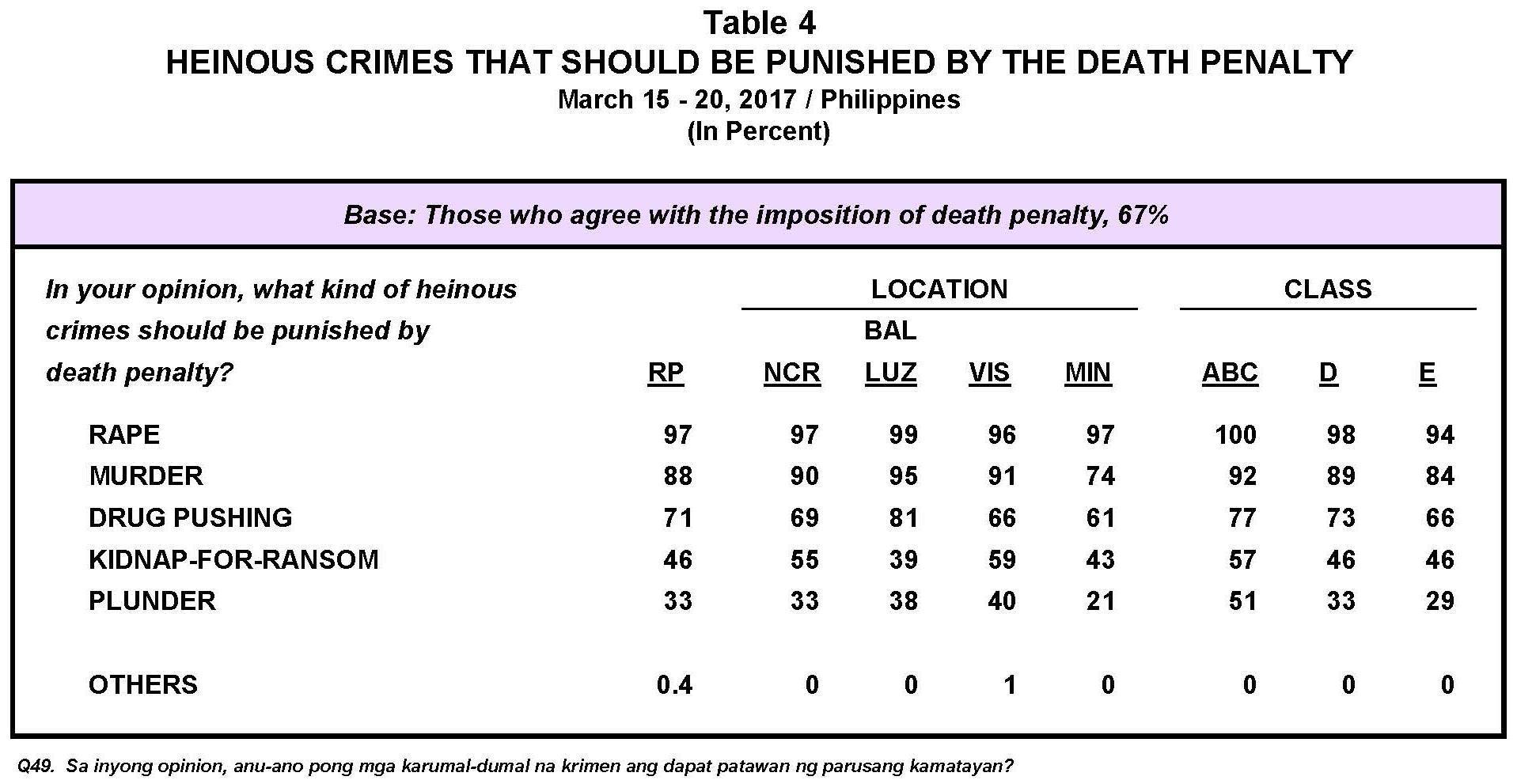 While the overall figures are generally unchanged between July 2016 and March 2017, a few movements may be observed across geographic areas and socio-economic classes. More Visayans now support imposing the death penalty for murder cases than in July 2016 (91% versus 75%). As regards kidnap-for-ransom cases, support for capital punishment declines in the rest of Luzon (-13 percentage points) but goes up in the Visayas (+20 percentage points). With regard to plunder cases, more Visayans are currently in favor of having the death penalty compared to July 2016 (40% versus 27%). (Please refer to Table 5.) 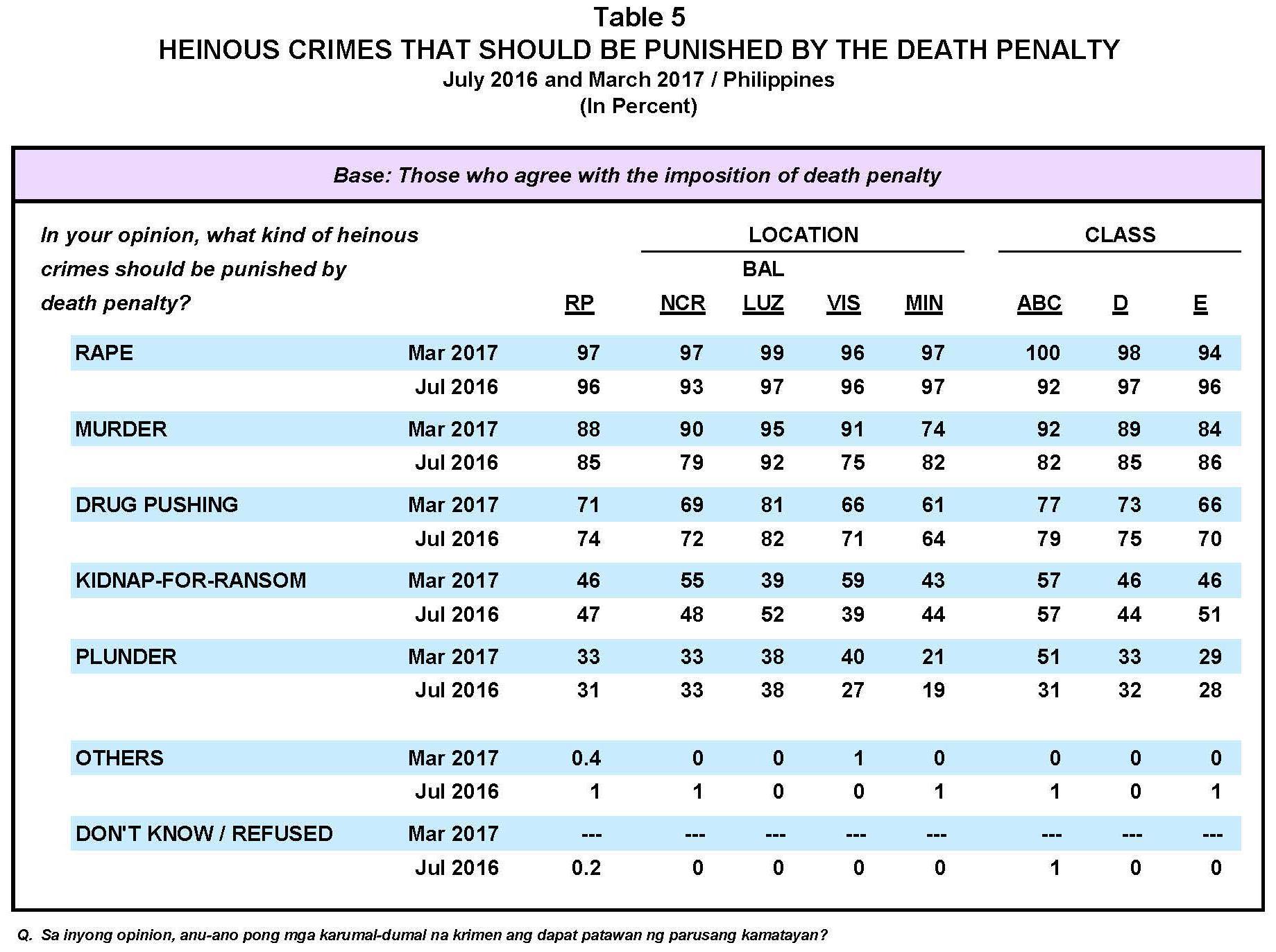