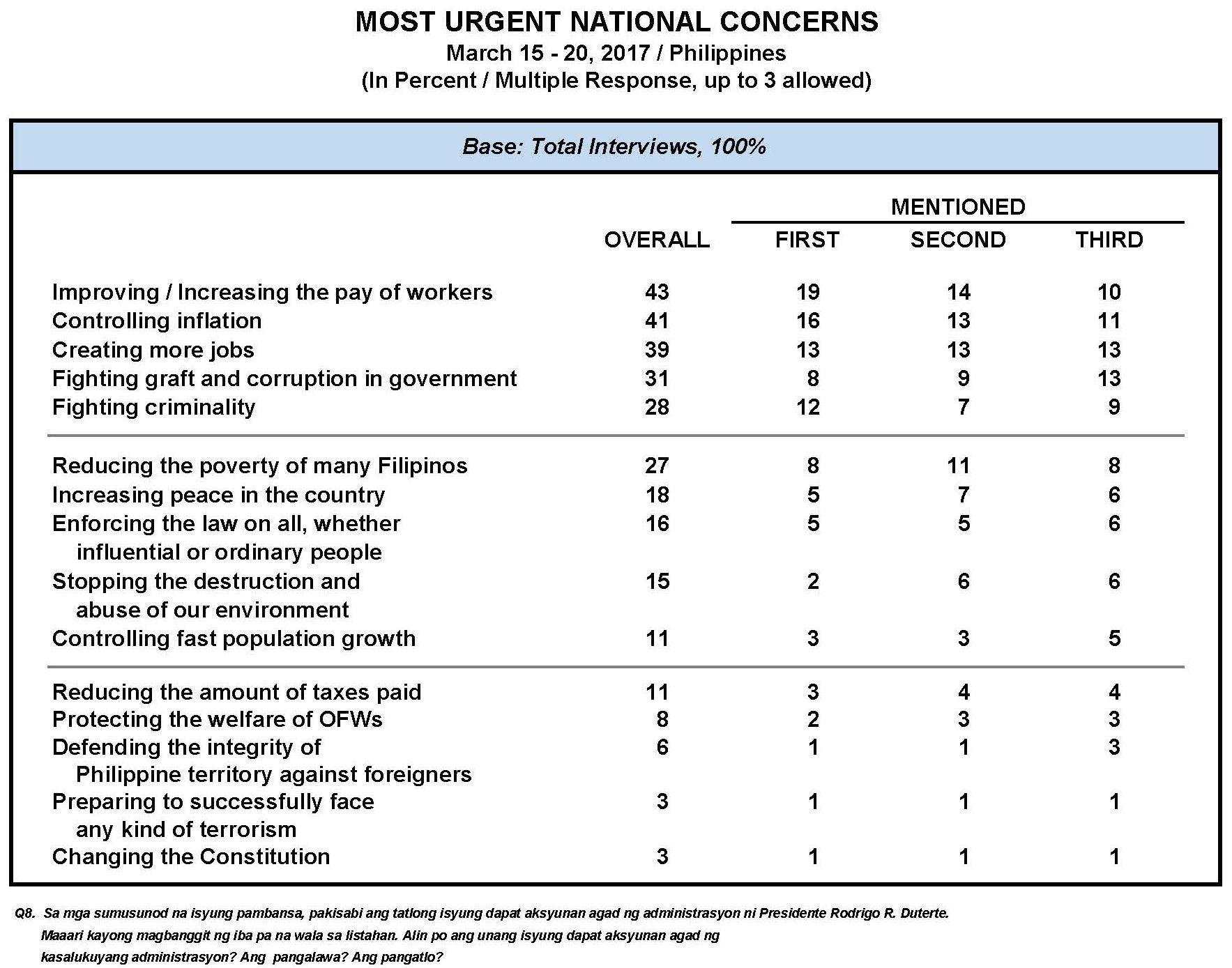 Pulse Asia Research, Inc. is pleased to share with you some findings on National Urgent Concerns and the Performance Ratings of the Duterte Administration from the March 2017 Ulat ng Bayan national survey. We request you to assist us in informing the public by disseminating this information.

In March 2017, Filipinos are most concerned about issues having to do with the economy – increasing the pay of workers (43%), controlling inflation (41%), and creating more jobs (39%). A second cluster of issues Filipinos are concerned about includes fighting corruption in government (31%), fighting criminality (28%), and reducing poverty (27%). Meanwhile, promoting peace (18%), enforcing the rule of law (16%), and protecting the environment (15%) comprise a third group of urgent national concerns. Another set of concerns deemed urgent by Filipinos include controlling rapid population growth (11%), reducing the amount of taxes paid by citizens (11%), protecting the welfare of overseas Filipino workers (8%), and defending national territorial integrity (6%). Filipinos are least concerned about terrorism (3%) and charter change (3%). (Please refer to Table 1.) 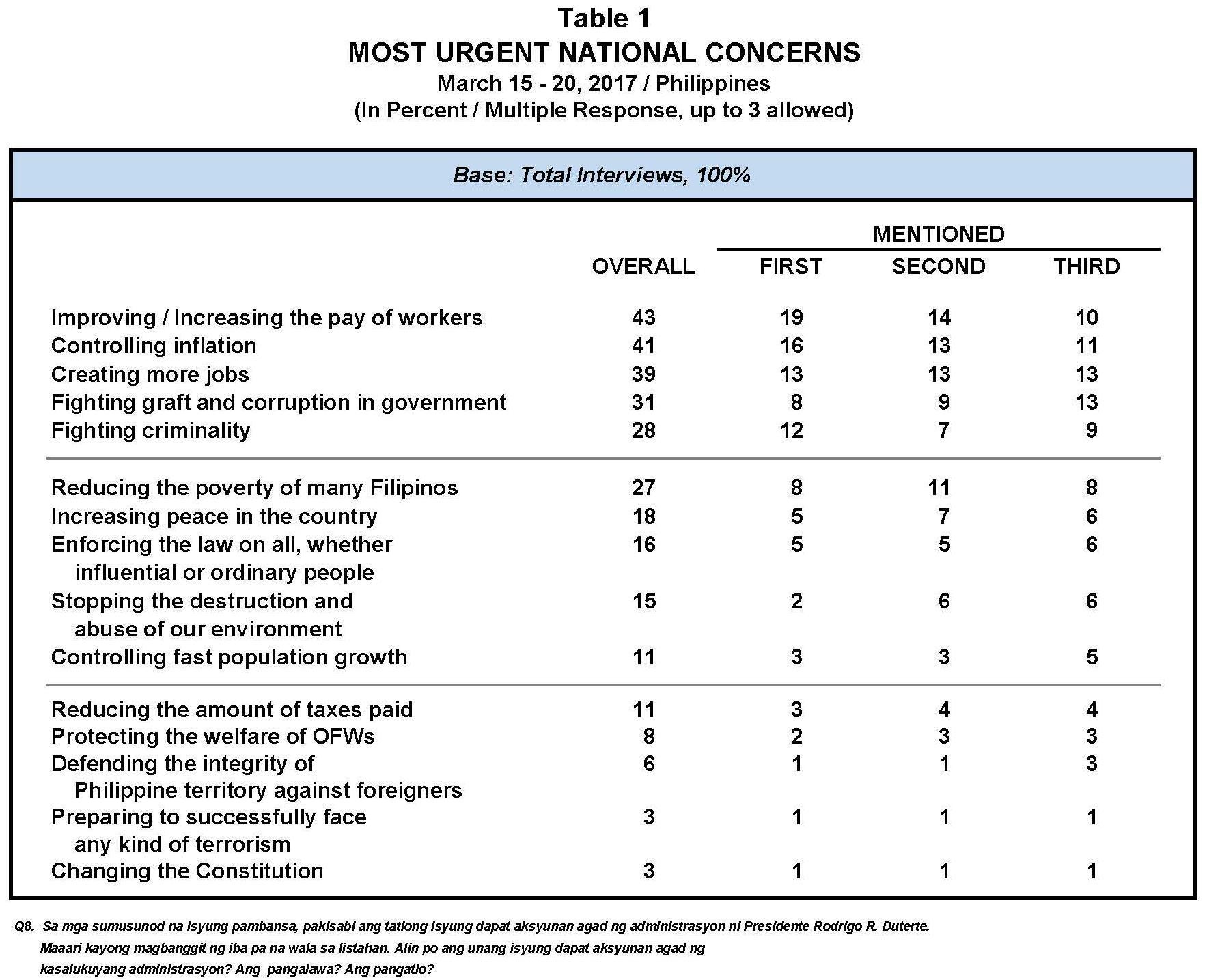 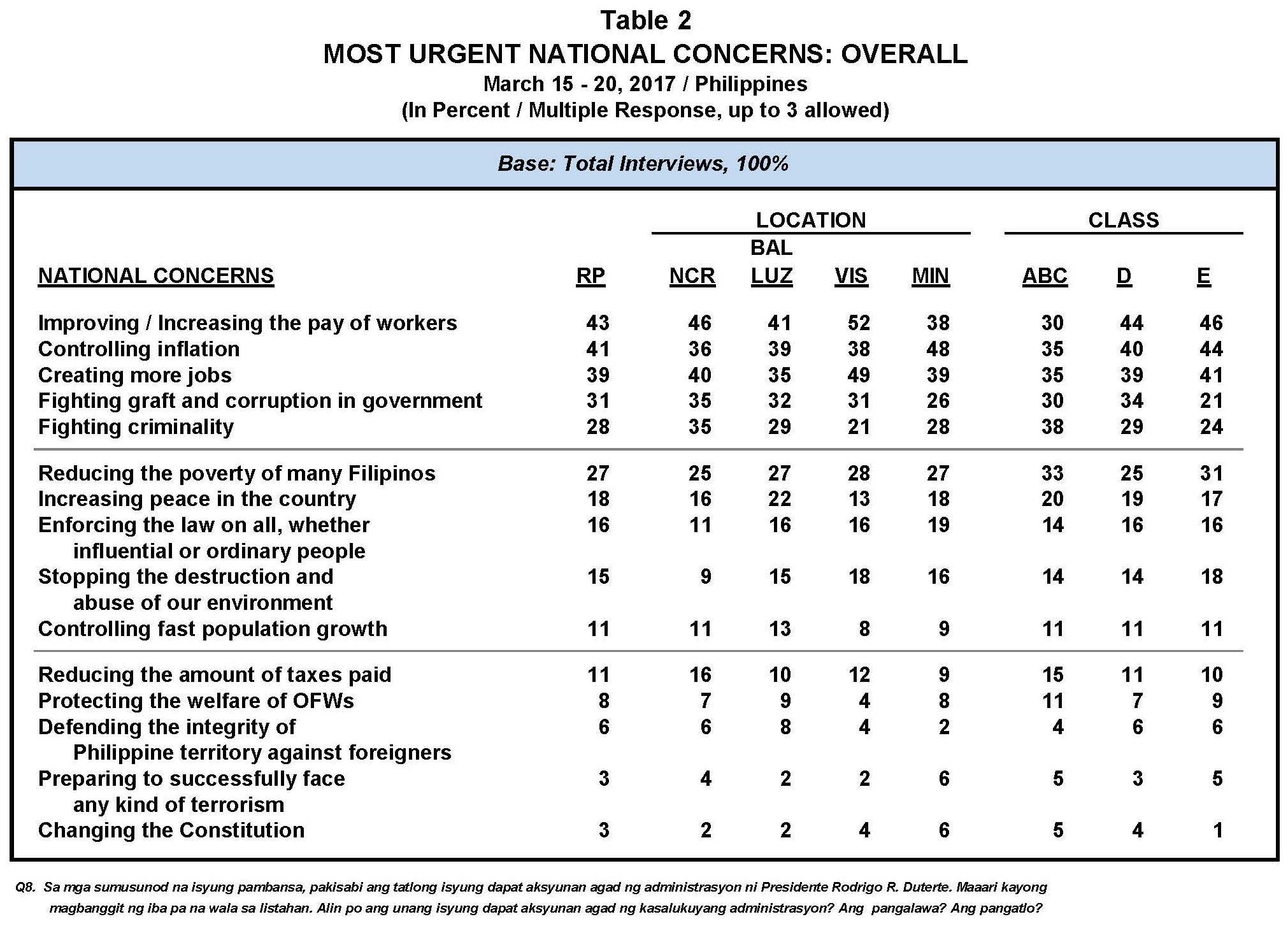 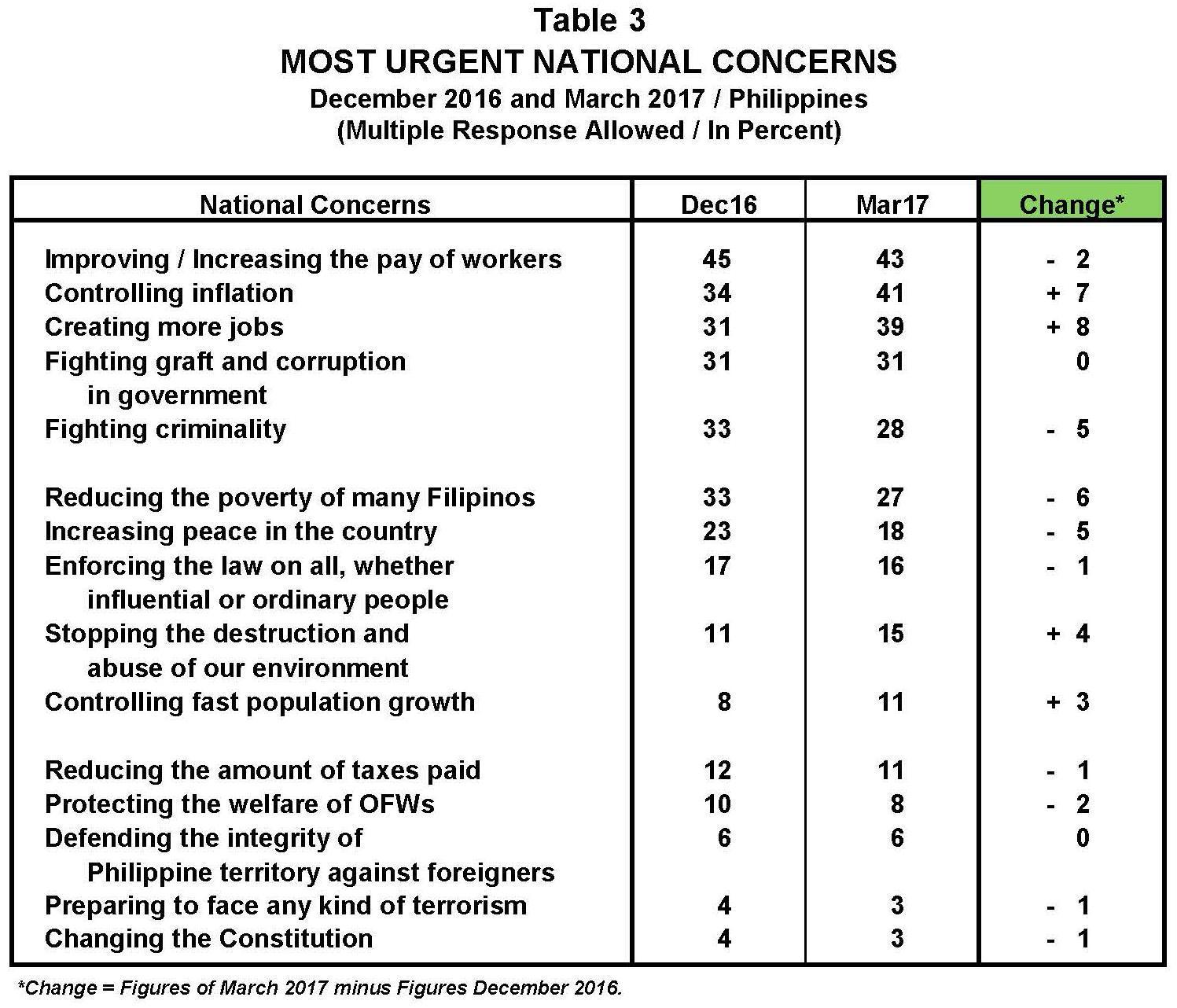 The Duterte administration records majority approval ratings on most issues on which it is performance-rated in March 2017; there are hardly any movements in the administration’s performance ratings between December 2016 and March 2017 except for the 8-percentage point decline in the level of approval for its efforts to defend national territorial integrity

Filipinos are most appreciative of the Duterte administration’s efforts to fight criminality (79%) and respond to the needs of areas affected by calamities (77%). The latter also scores majority approval ratings for its work in the areas of protecting the welfare of OFWs (71%), fighting corruption (70%), promoting peace (69%), protecting the environment (68%), enforcing the rule of law (68%), creating jobs (58%), defending the national territory from foreigners (57%), and increasing workers’ pay (55%). It is only in the areas of reducing poverty and controlling inflation where the current dispensation fails to obtain majority approval figures as it scores approval ratings of 50% and 45%, respectively. It may be noted that inflation is one of the leading urgent national concerns of Filipinos in March 2017 (41%). (Please refer to Table 4.)

Conversely, Filipinos are most critical of the administration’s initiatives to control inflation (22%) and least inclined to disapprove of its disaster response efforts (3%). Levels of indecision toward the Duterte administration’s handling of all 12 issues on which its performance is assessed in this quarter range from 16% on fighting criminality to 36% on reducing poverty. 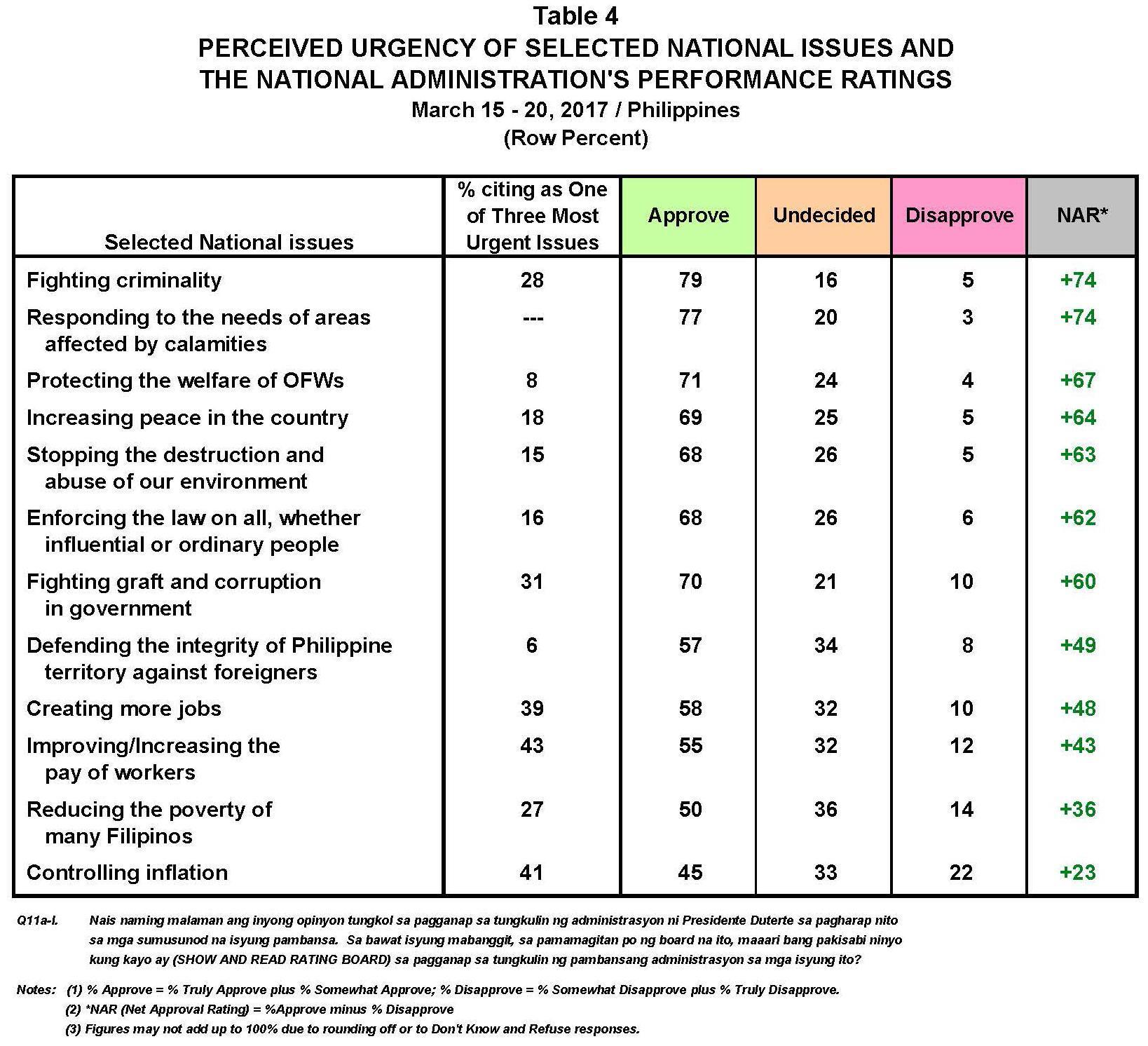 Filipinos’ assessment of the work done by the Duterte administration is essentially unchanged between December 2016 and March 2017. There is only one significant change this period and that is the 8-percentage point drop in the level of approval for the administration’s efforts to defend the national territory against foreigners. Nonetheless, the decline in the levels of appreciation for the present leadership’s work in the areas of fighting criminality and corruption (-5 and -6 percentage points, respectively) and the level of indecision for its performance in the area of protecting the national territory from foreigners (+6 percentage points) are worth noting as these border closely to the overall survey error margin (+/- 3 percentage points). (Please refer to Table 5.) 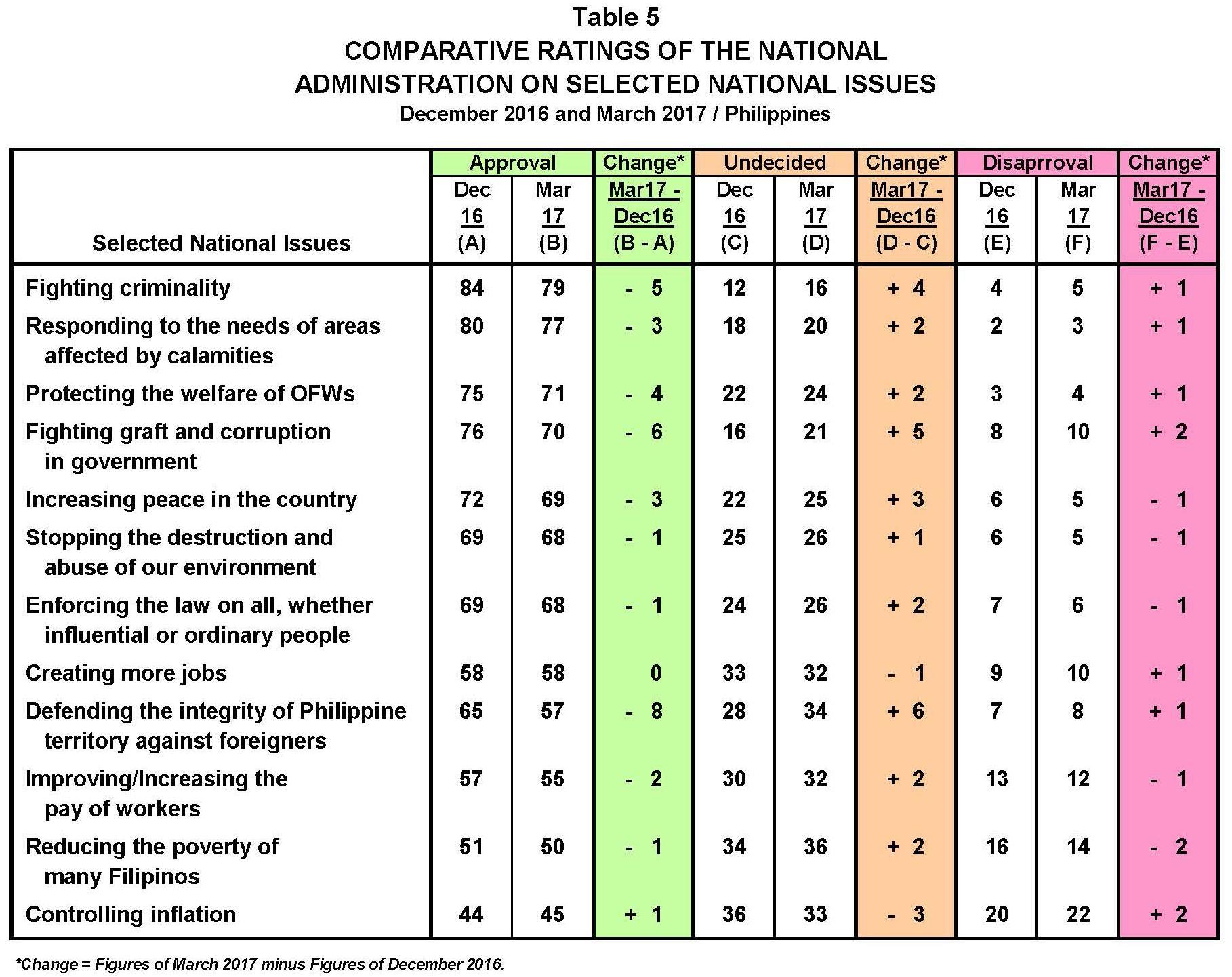