Pulse Asia Research, Inc. is pleased to share with you some findings on the State of the Nation Address (SONA) from the June 2018 Ulat ng Bayan national survey. We request you to assist us in informing the public by disseminating this information.

Awareness of any of the past State of the Nation Addresses (SONAs) of President Rodrigo R. Duterte is reported by a huge majority of Filipinos (83%). Majority awareness levels are posted across geographic areas (i.e., from 80% in the rest of Luzon to 87% in the Visayas) and socio-economic groupings (i.e., from 74% in Class E to 88% in Class ABC). On the other hand, 17% of Filipinos have not heard, read, or watched anything about the previous SONAs delivered by the President before Congress. (Please refer to Table 1.) 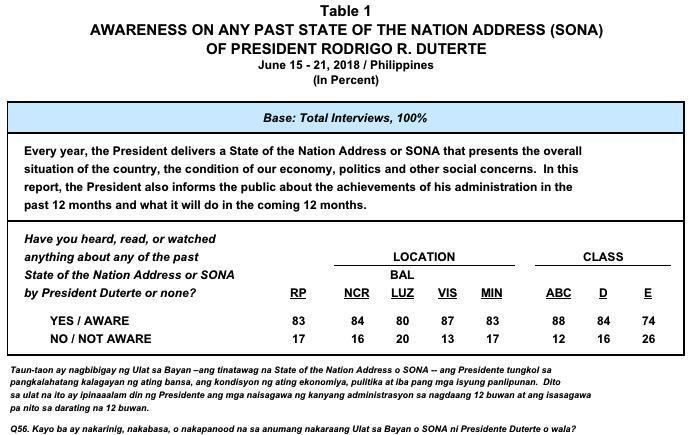 For 69% of Filipinos, the most important accomplishment of President Duterte and his administration since they assumed office in June 2016 would be their anti-illegal drugs initiatives. This is the majority opinion in all geographic areas (i.e., from 64% in the rest of Luzon to 77% in Metro Manila) and socio-economic classes (i.e., from 69% in Class D to 74% in Class ABC). Meanwhile, half of Filipinos (50%) consider the anti-crime efforts of the Duterte administration as its most significant achievement. Most Metro Manilans (61%), Visayans (58%), and those in Classes ABC and E (53% and 54%, respectively) share this assessment. (Please refer to Table 2.) 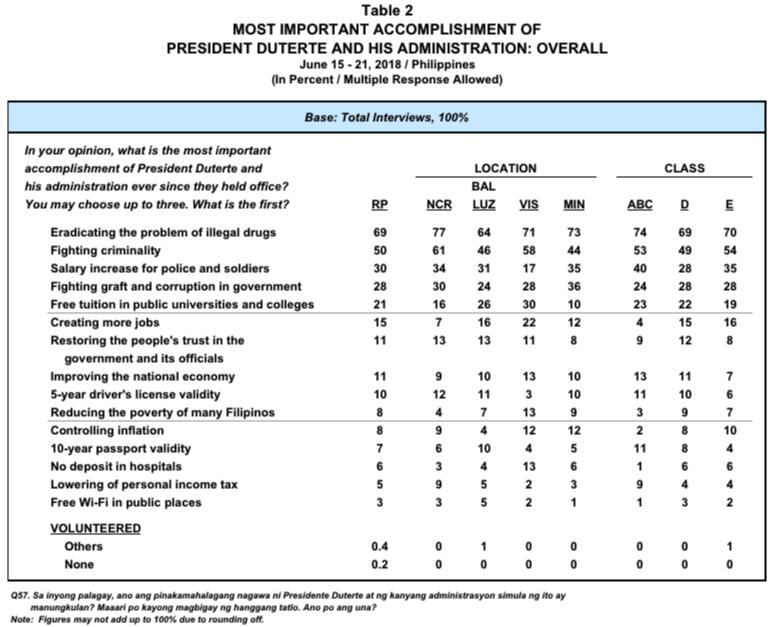 A third set of accomplishments of the incumbent administration that are considered most important by Filipinos includes the salary increase for police and military personnel (30%) and its fight against graft and corruption in government (28%). On the other hand, 21% of Filipinos say the granting of free tuition to students enrolled in public universities and colleges is the most significant achievement of the administration. The efforts of President Duterte and his administration to create  more jobs (15%), restore public trust in government and its officials (11%), improve the state of the national economy (11%), and extend the validity of drivers’ licenses (10%) comprise a fifth group of key accomplishments of the present dispensation. The least often mentioned achievements of the Duterte administration are poverty reduction (8%), inflation control (8%), extension of the validity of passports (7%), no-deposit policy in hospitals (6%), lowering of personal income tax (5%), and provision of free internet in public areas (3%).

The majority of Filipinos say President Duterte should give emphasis to the creation of more jobs (56%) and efforts to control the rising prices of basic commodities (52%) in his upcoming SONA. This is the prevailing sentiment in Metro Manila (56% and 51%, respectively), the rest of Luzon (55% and 51%, respectively), the Visayas (65% and 51%, respectively), and Class D (58% and 52%, respectively). Most Mindanawons and those in Class ABC are also in favor of President Duterte highlighting his administration’s efforts to control inflation (56% and 68%, respectively) while a little over half of those in Class E (52%) would like him to prioritize the issue of creating more jobs for Filipinos. The only other issue cited by a majority in any of the geographic areas and socio-economic groupings is the need to increase the pay of workers – an issue which 54% of those in Balance Luzon would like the President to focus on in his July 2018 SONA. At the national level, this issue is cited by 48% of Filipinos. (Please refer to Table 3.)

One (1) out of every three (3) Filipinos prefers that President Duterte focus on further reducing poverty in the country (33%) while about a quarter of Filipinos say he should give emphasis to the issues of contractualization (27%) and illegal drugs (26%). Fewer Filipinos are of the view that the President should prioritize the issues of graft and corruption (16%), the country’s territorial sovereignty in the West Philippine Sea (16%), federalism (5%), and charter change (3%). It may be noted that across geographic areas and socio-economic classes, less than one (1) in 10 Filipinos would like President Duterte to place emphasis on the issue of charter change (2% to 4% and 1% to 4%, respectively) while preference for the President focusing on federalism in his SONA does not go beyond 10% (i.e., as recorded in Mindanao). 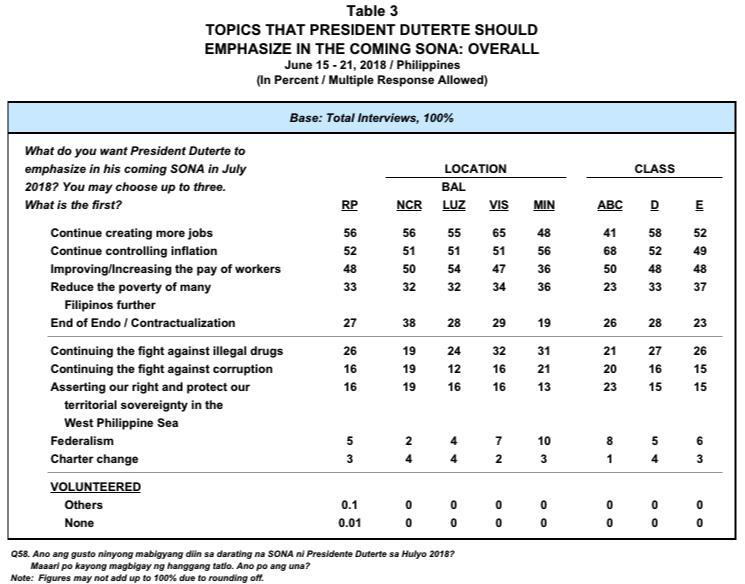 1 For this probe, the survey respondents were allowed to choose up to three (3) answers from a list of 15 issues. Volunteered answers (i.e., those not included in the list) were also noted by field interviewers. These make up less than 1% of the total responses for this survey.

2 For this probe, the survey respondents were allowed to choose up to three (3) answers from a list of 10 issues. Volunteered answers (i.e., those not included in the list) were also noted by field interviewers. These make up less than 1% of the total responses for this survey.