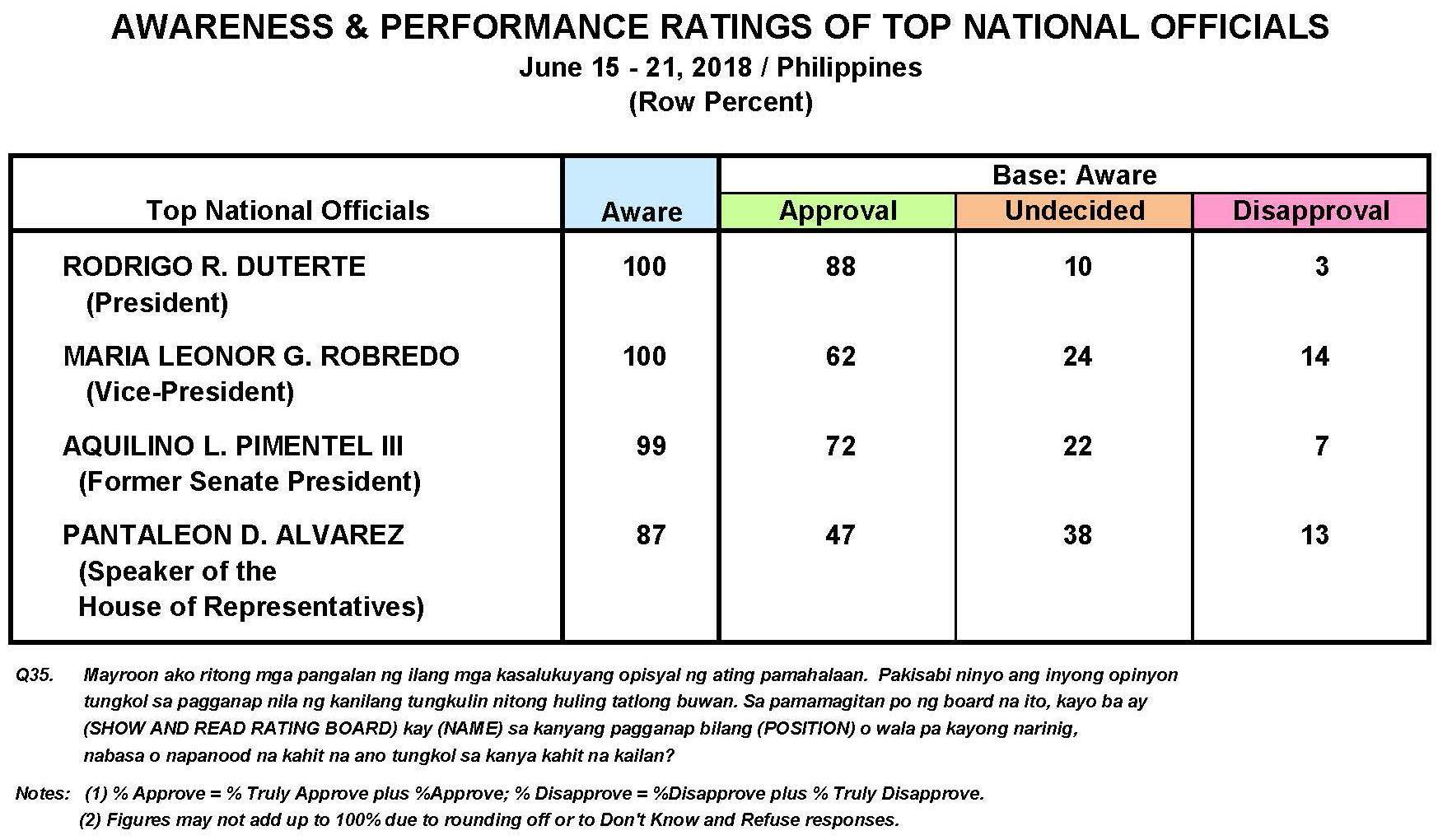 Pulse Asia Research, Inc. is pleased to share with you some findings on the Performance and Trust Ratings of the Top National Government Officials and the Performance and Trust Ratings of Key Government Institutions from the June 2018 Ulat ng Bayan national survey. We request you to assist us in informing the public by disseminating this information.

Majority approval scores are obtained by President Rodrigo R. Duterte (88%), Vice-President Maria Leonor G. Robredo (62%), and former Senate President Aquilino L. Pimentel III (72%).1  A big plurality of Filipinos (47%) express appreciation for the work done by House Speaker Pantaleon D. Alvarez. Levels of disapproval for the performance of these top officials vary from 3% for President Duterte to 14% for Vice-President Robredo while their indecision figures range from 10% for the President to 38% for the House Speaker. (Please refer to Table 1.) 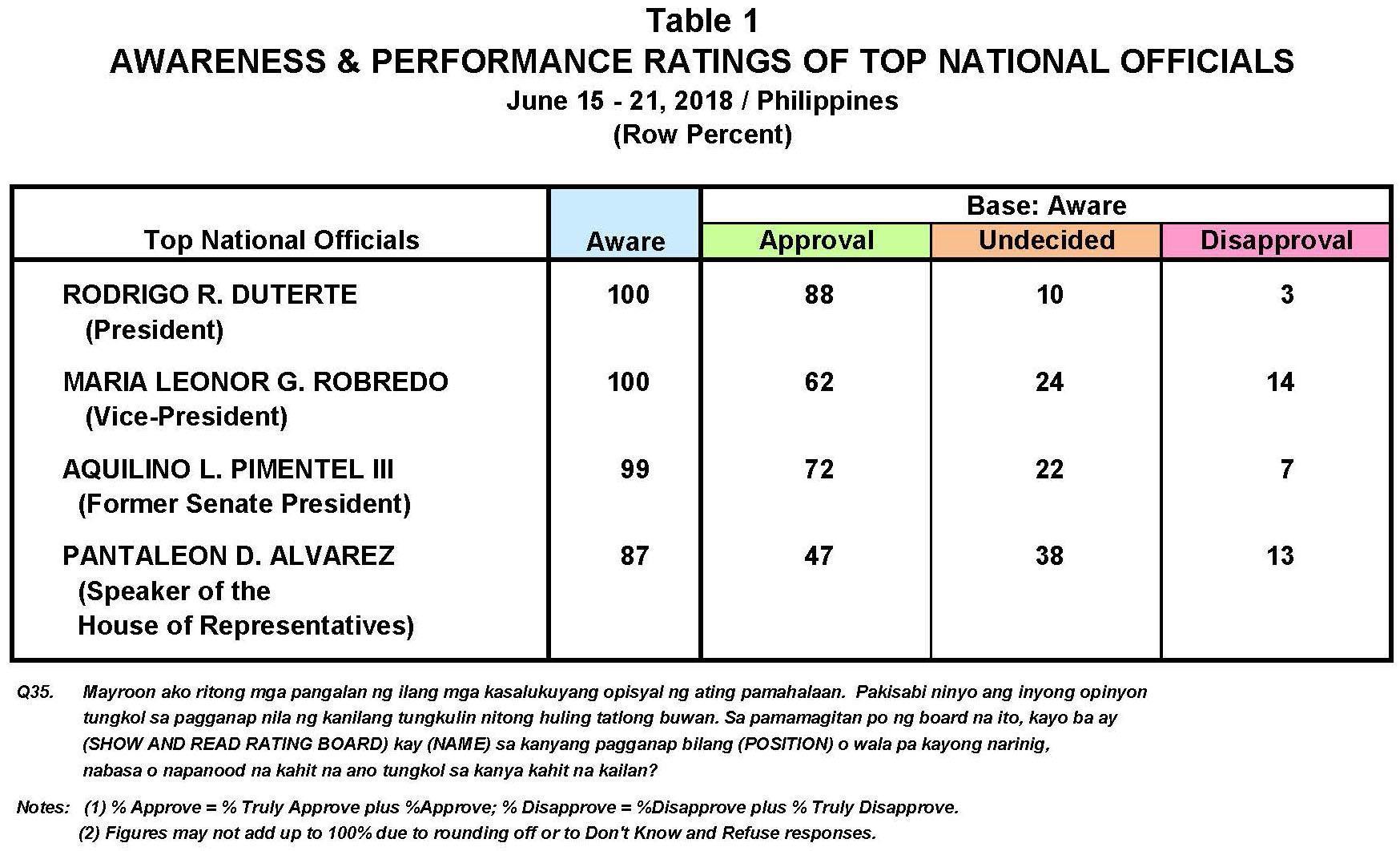 President Duterte and former Senate President Pimentel register majority approval ratings across geographic areas (83% to 99% and 66% to 81%, respectively) and socio-economic groupings (84% to 91% and 67% to 76%, respectively). For her part, Vice-President Robredo enjoys majority approval scores in every geographic area (56% to 73%) and in Classes D and E (both at 63%). Appreciation toward the latter’s work is only a plurality sentiment in Class ABC (41%). In the case of House Speaker Alvarez, most Mindanawons (68%) and those in Class E (52%) approve of his work in the past quarter. However, the lawmaker records essentially the same approval and indecision figures in Metro Manila (39% versus 41%), the rest of Luzon (41% versus 42%), the Visayas (44% versus 48%), Class ABC (45% versus 30%), and Class D (47% versus 40%). (Please refer to Table 2.) 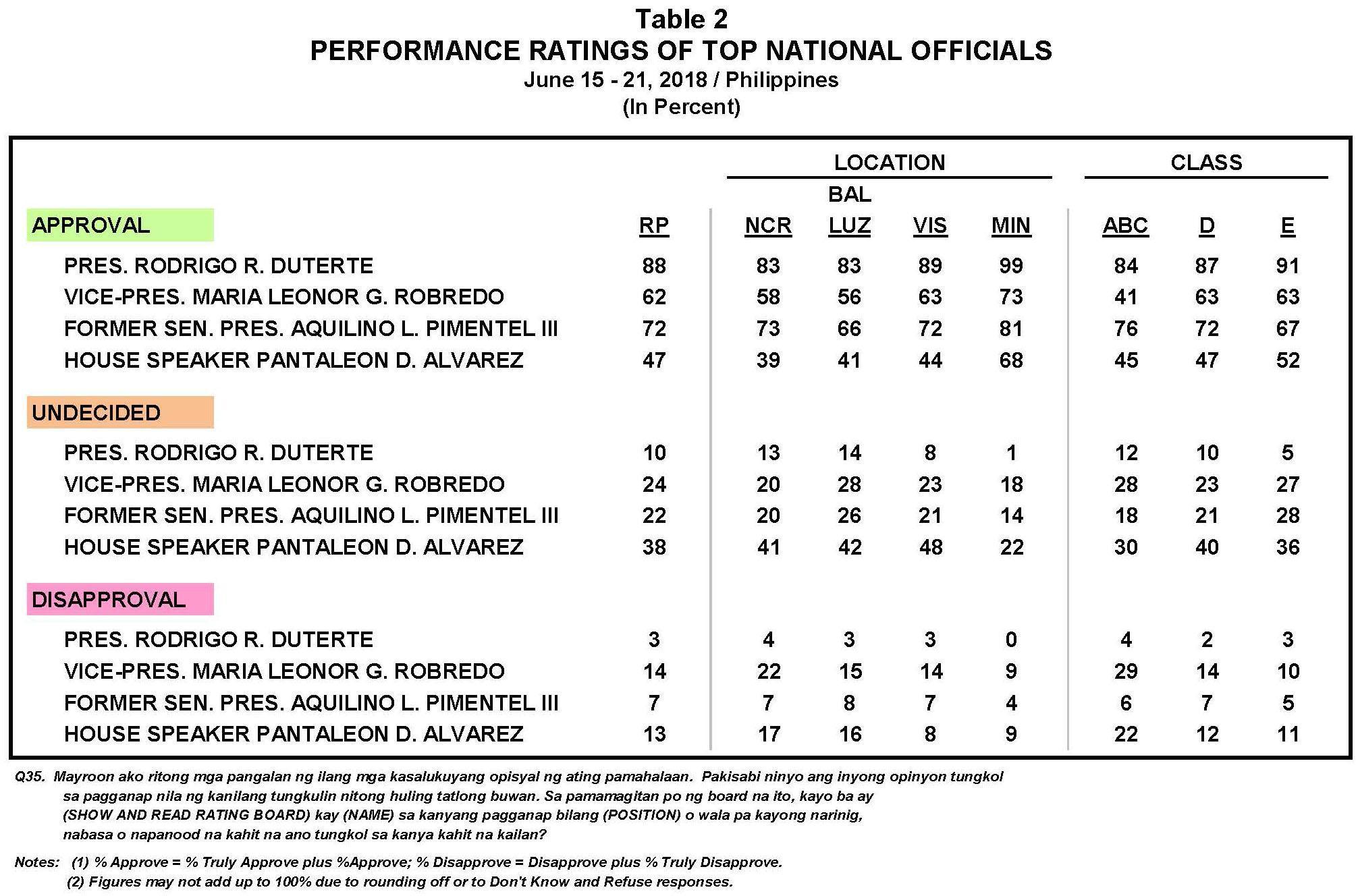 In June 2018, trust is the predominant sentiment among Filipinos toward President Duterte (87%), Vice-President Robredo (56%), and former Senate President Pimentel (64%) while a big plurality of Filipinos express trust in House Speaker Alvarez (45%). Indecision is the plurality opinion on the matter of trusting or distrusting former Supreme Court Chief Justice Maria Lourdes A. Sereno (45%). With respect to distrust in these officials, it is more notable toward the Supreme Court Chief Justice (35%) and least manifest toward President Duterte (2%). (Please refer to Table 3.) 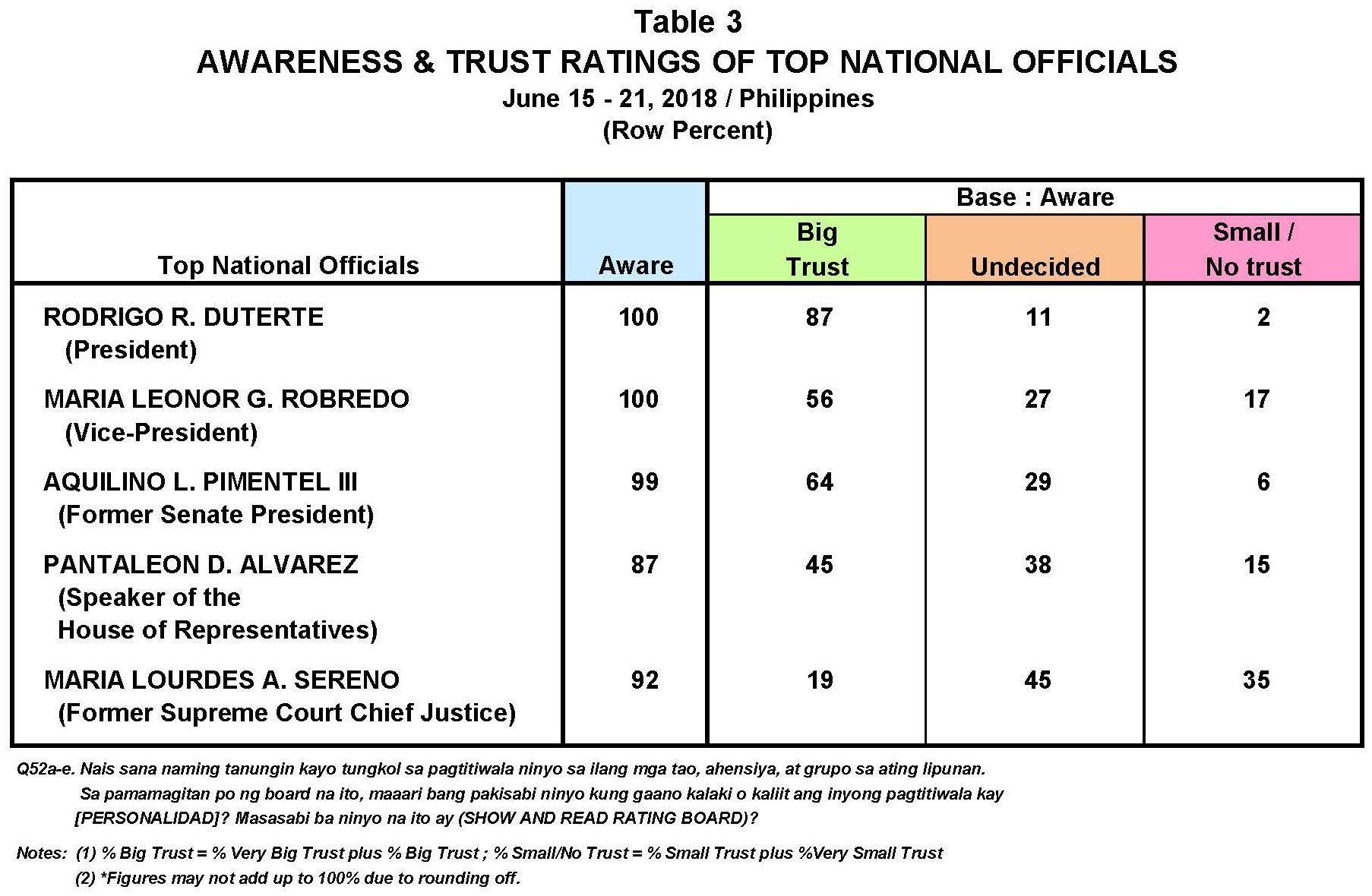 The same officials who have majority approval ratings in all geographic areas and socio-economic classes also have majority trust scores in these subgroupings – President Duterte (79% to 94% and 82% to 88%, respectively) and former Senate President Pimentel (61% to 71% and 58% to 66%, respectively). Majority trust ratings are enjoyed by Vice-President Robredo in most geographic areas (54% to 62%) and Class D (59%). However, those in Metro Manila and Classes ABC and E withhold majority trust ratings from her (32% to 50%). (Please refer to Table 4.)

The only majority trust rating of House Speaker Alvarez is given by Mindanawons (61%). Trust is the plurality sentiment toward the latter in Class D (46%) while indecision on the matter of trusting or distrusting him is expressed by nearly half of those in Metro Manila (46%). Meanwhile, House Speaker Alvarez posts almost or exactly the same trust and indecision figures in the rest of Luzon (both at 41%), the Visayas (46% versus 39%), Class ABC (42% versus 39%), and Class E (43% versus 42%).

Most Metro Manilans cannot say if they trust or distrust former Supreme Court Chief Justice Sereno (57%). Ambivalence toward the latter’s trustworthiness is shared by big pluralities in the rest of Luzon (49%) and Class D (46%). On the other hand, the former Supreme Court Chief Justice has practically the same distrust and indecision ratings in the Visayas (39% versus 42%), Mindanao (44% versus 33%), Class ABC (40% versus 45%), and Class E (37% versus 41%). 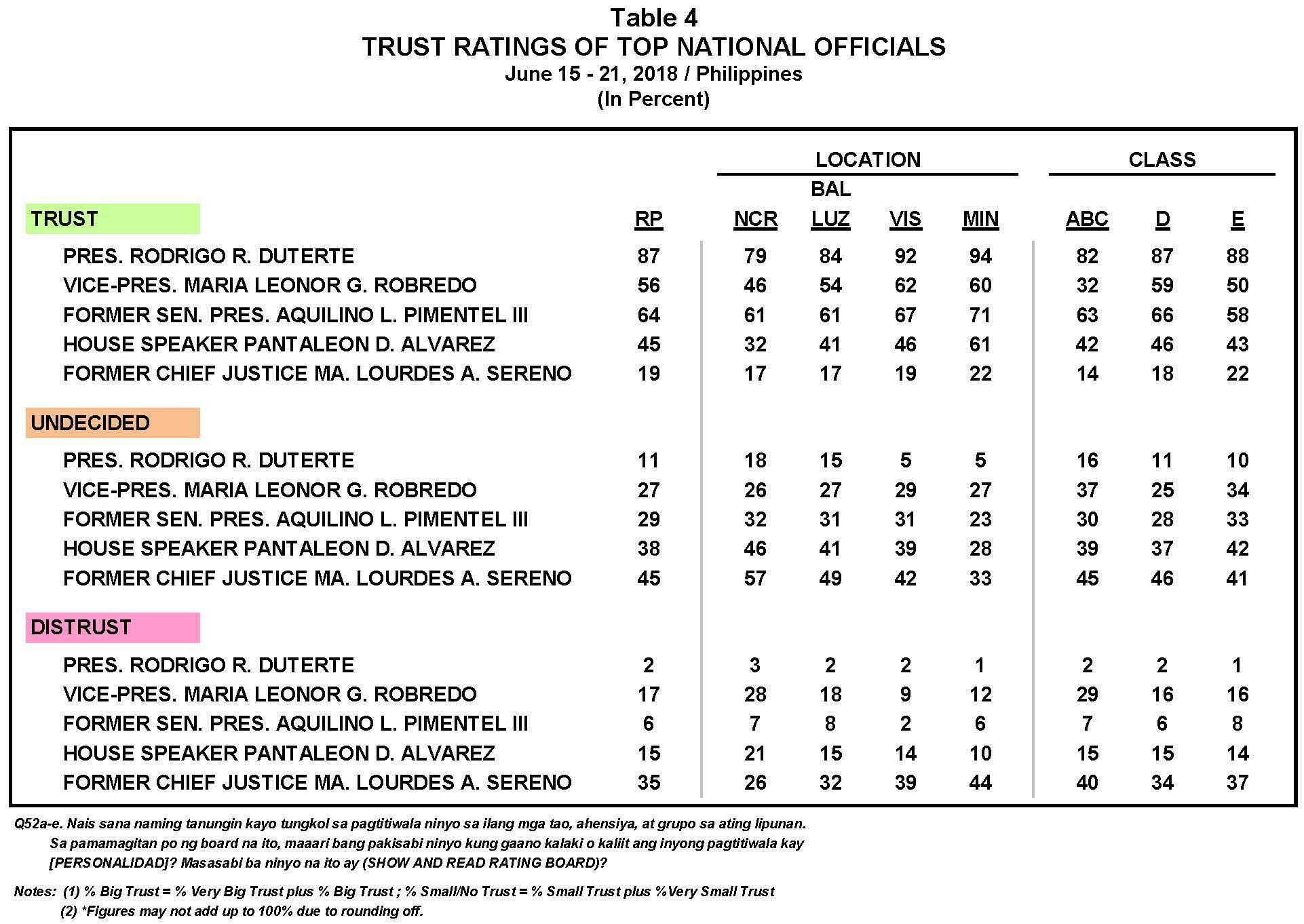 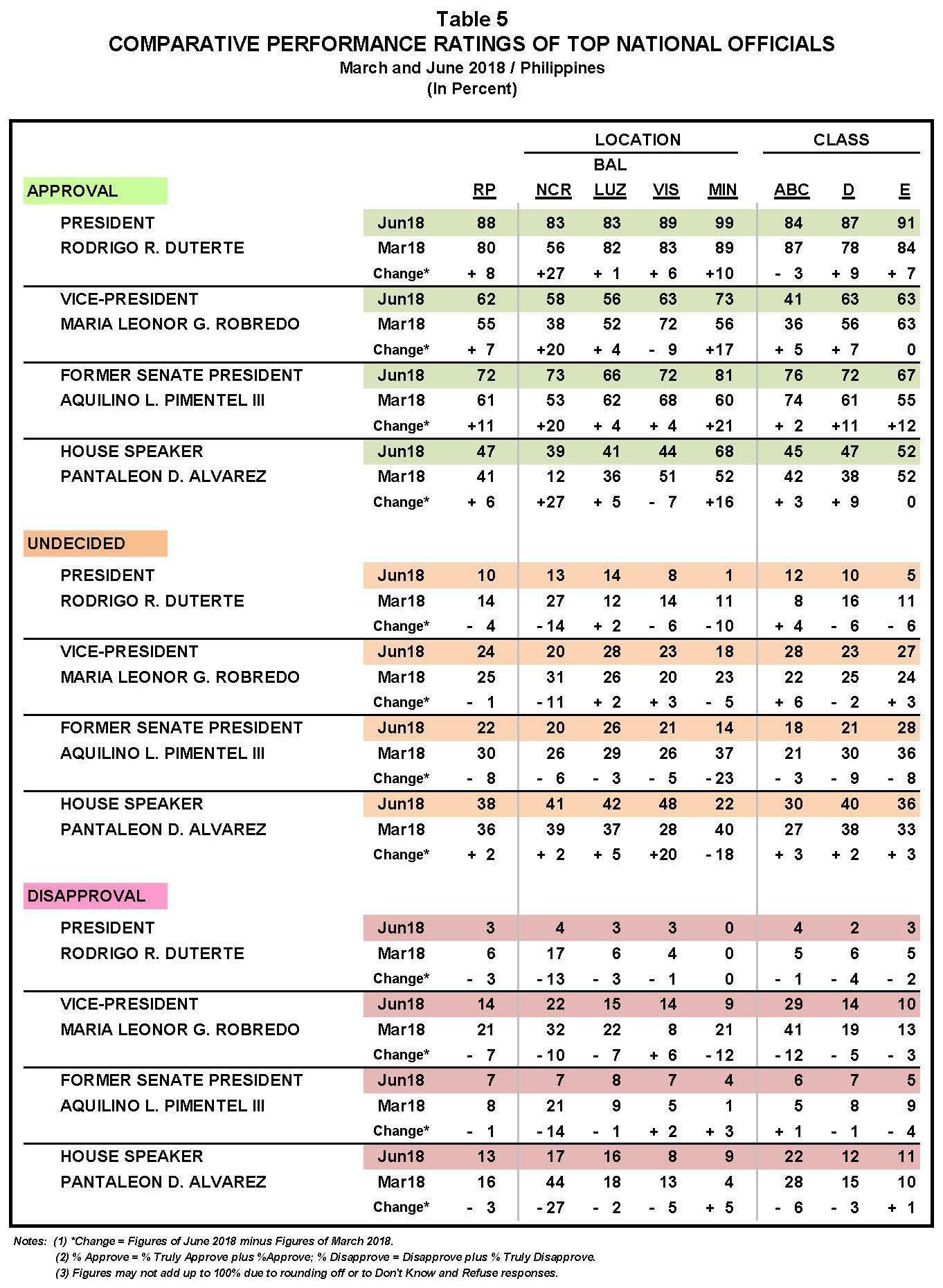 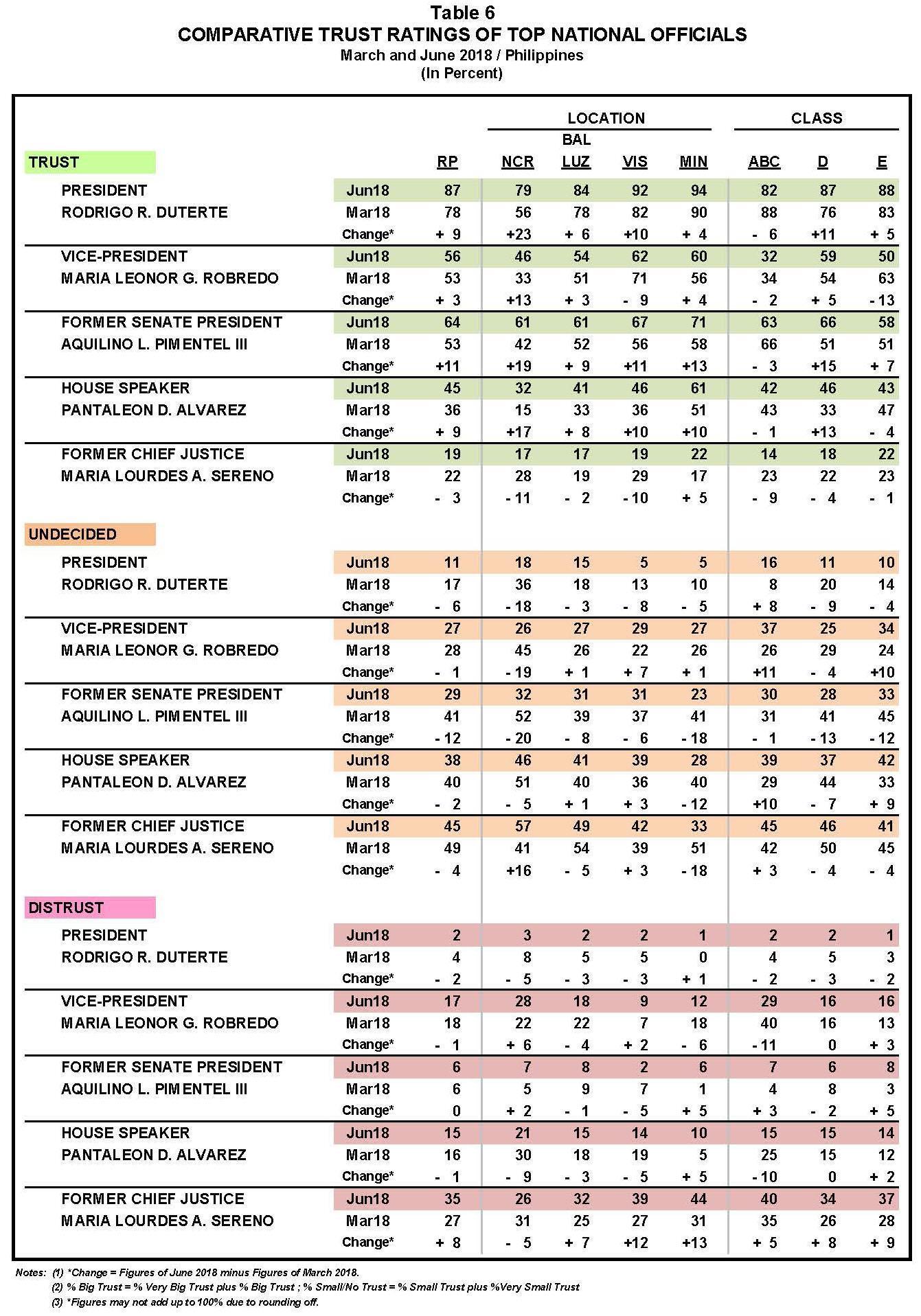 Sizeable majority approval figures are enjoyed by the Senate (69%), the House of Representatives (66%), and the Supreme Court (63%) at the national level. These institutions register basically the same indecision and disapproval ratings (23% to 27% and 7% to 10%, respectively). Both the Senate and the House of Representatives record majority approval scores in every geographic area (64% to 74% and 55% to 69%, respectively) and socio-economic class (68% to 70% and 65% to 69%, respectively). Approval is the prevailing opinion toward the work of the Supreme Court in most geographic areas and all socio-economic groupings (61% to 72% and 58% to 67%, respectively), with Metro Manila being the exception (49%). (Please refer to Table 7.) 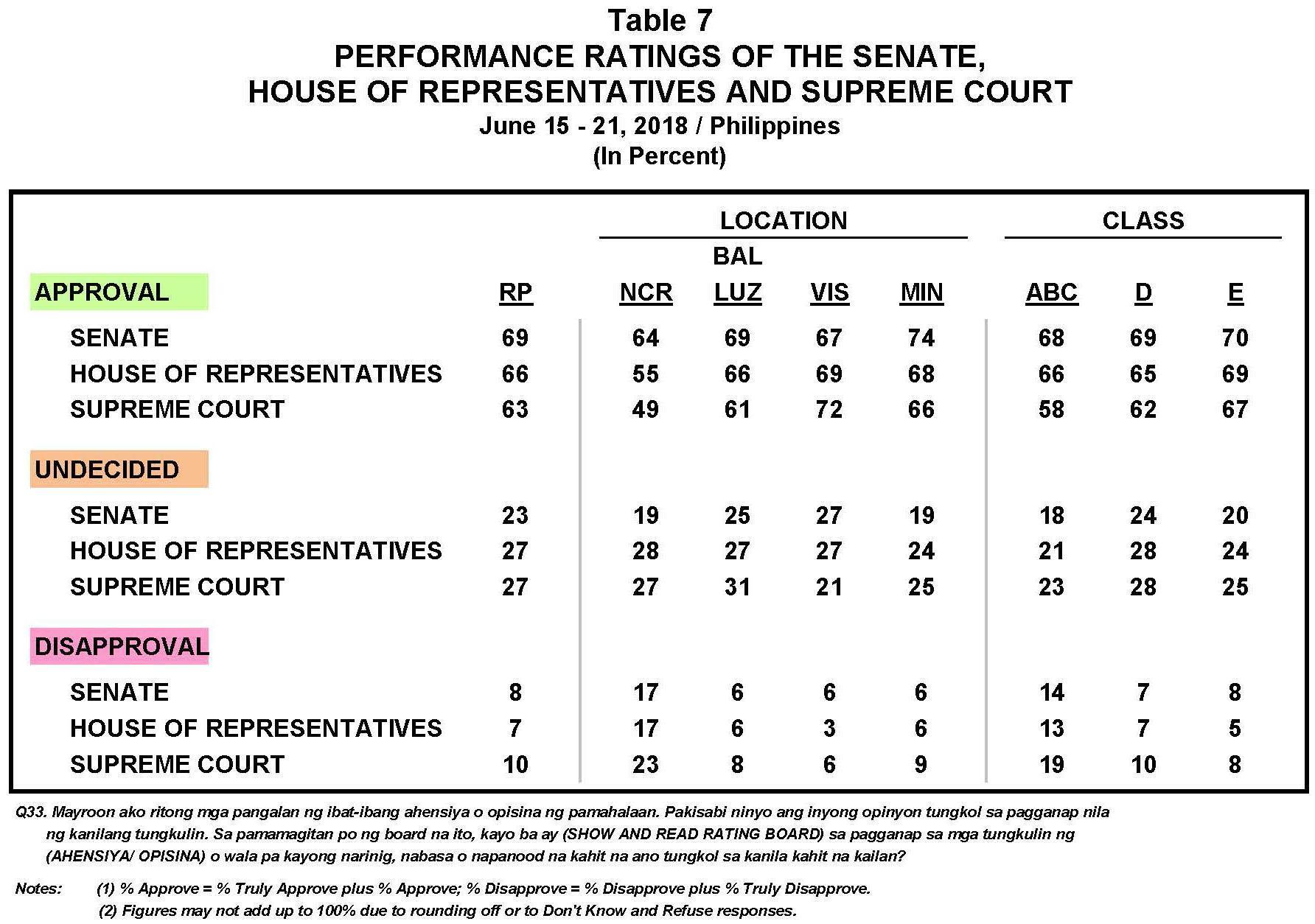 Most Filipinos trust the Senate (61%), the House of Representatives (58%), and the Supreme Court (54%). The distrust ratings of these institutions are statistically the same (6% to 7%) while their indecision figures range from 33% for the Senate to 39% for the Supreme Court. Trust is the predominant sentiment toward both the Senate and the House of Representatives across geographic areas (52% to 72% and 52% to 67%, respectively) and socio-economic groupings (60% to 63% and 55% to 66%, respectively). Majority trust ratings are also enjoyed by the Supreme Court in most geographic areas and socio-economic classes (54% to 60% and 54% to 55%, respectively). Half of those in Class ABC (50%) trust the Supreme Court but almost the same percentages of Metro Manilans either trust the Higher Court (46%) or are ambivalent about its trustworthiness (44%). (Please refer to Table 8.) 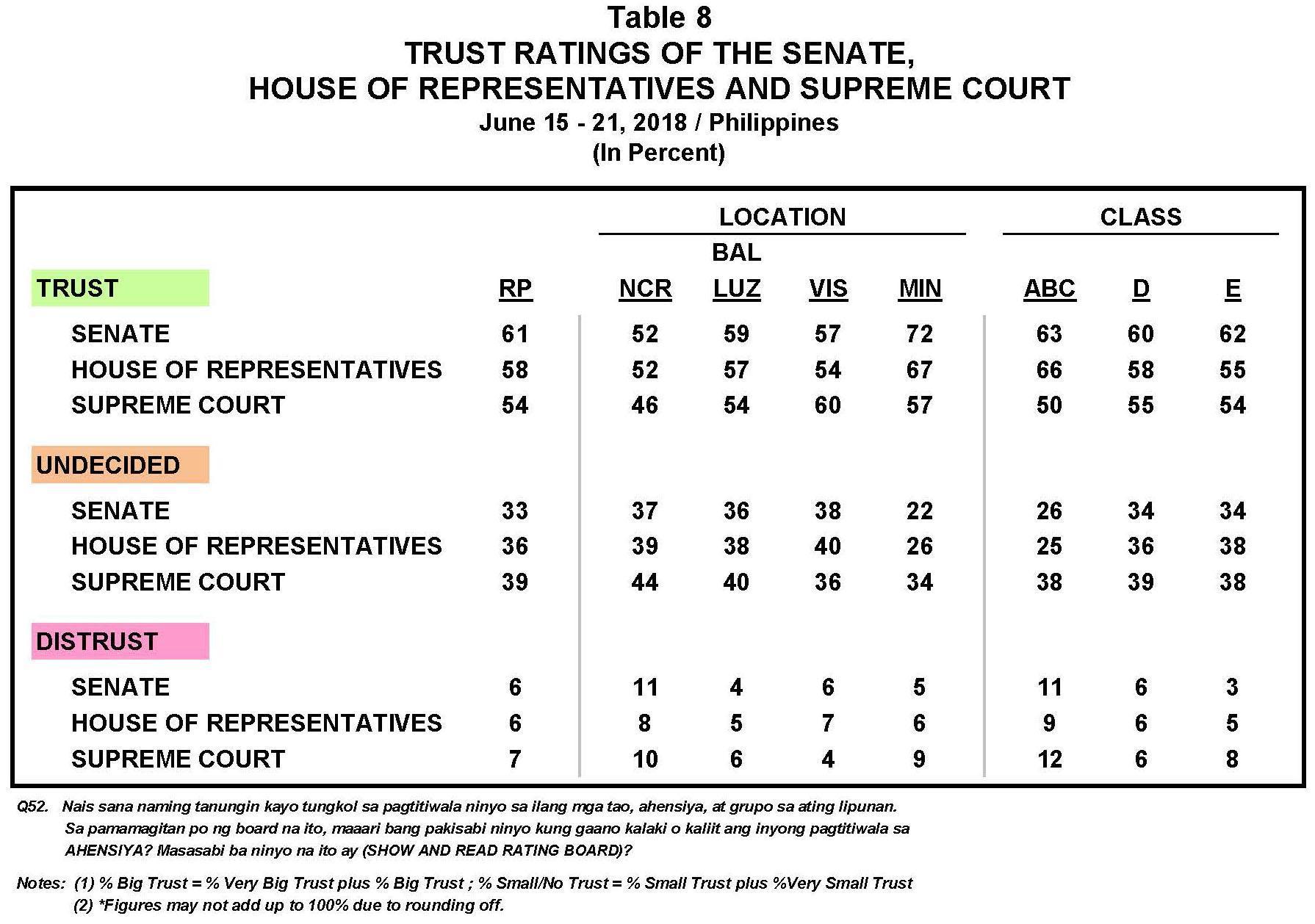 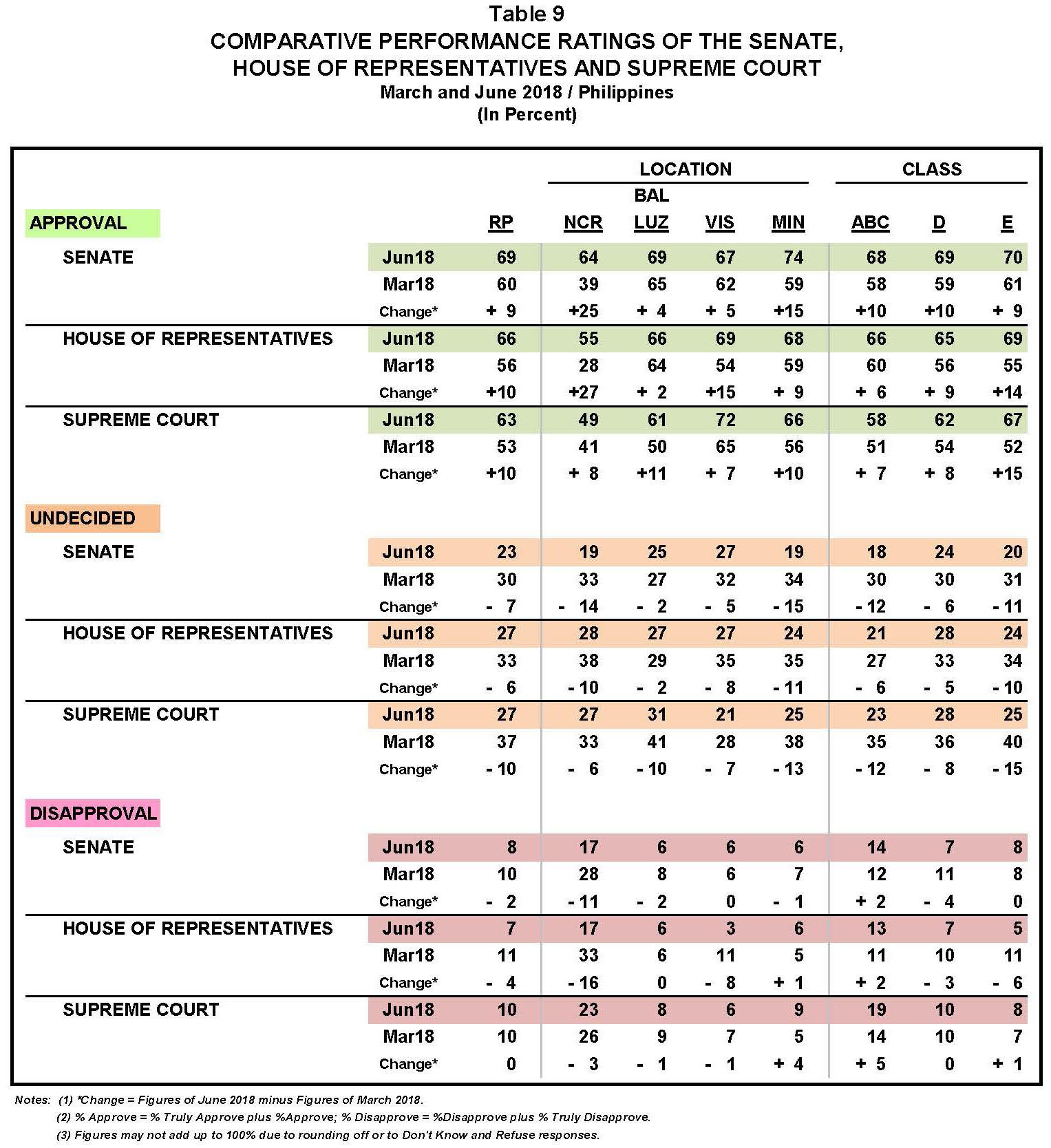 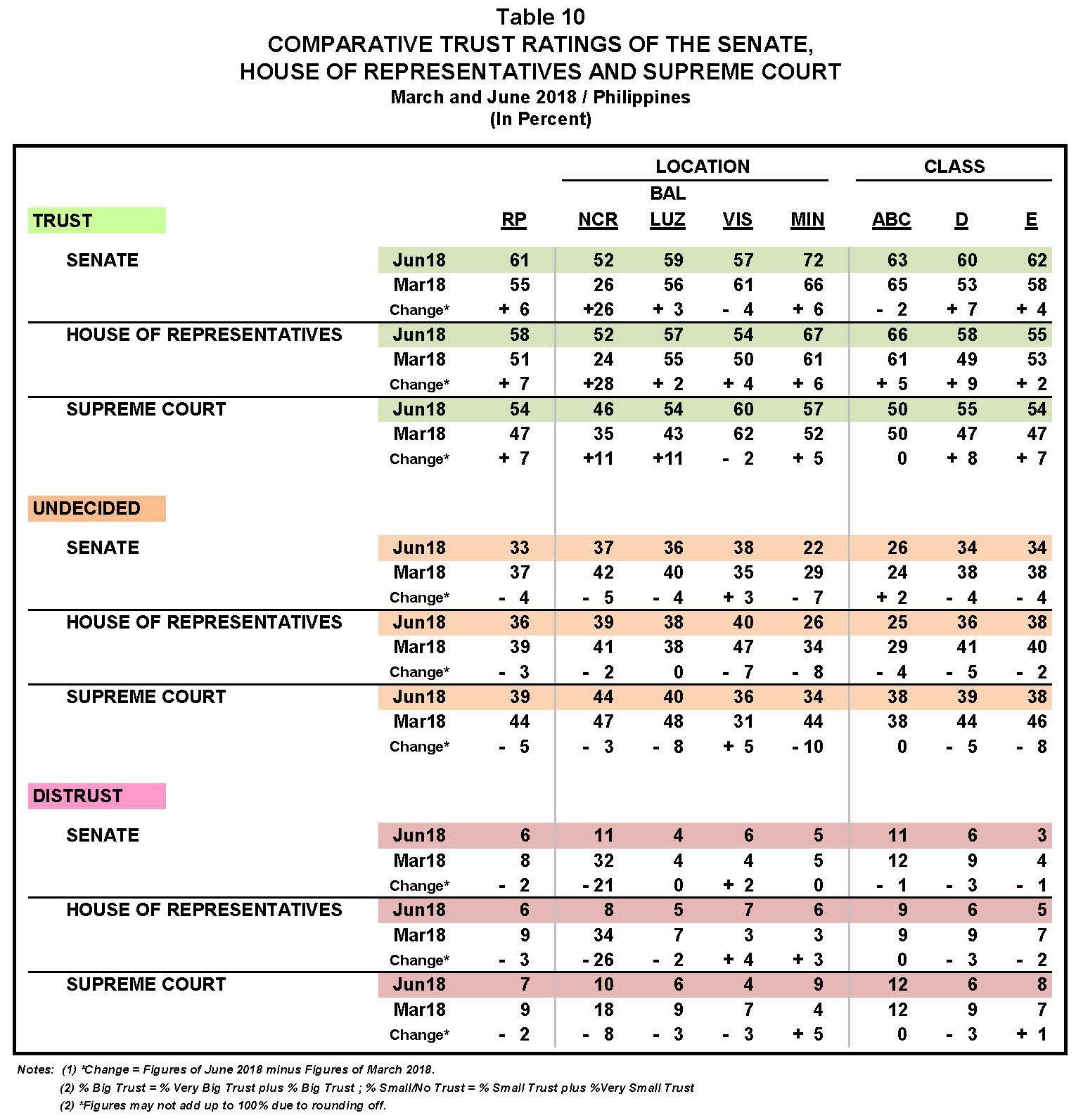 1 The change in the Senate leadership took place on 21 May 2018 when Senate President Aquilino L. Pimentel III stepped down and gave way to Senator Vicente Sotto III. This transpired after 15 senators signed a resolution expressing the sense of the Senate to re-organize its leadership and to elect Senator Sotto as the next Senate President. The performance probe asks respondents to assess the work done by selected government officials in the three (3) months prior to the conduct of the survey. Senator Pimentel still occupied the Senate presidency during most of the quarter covered by this survey’s performance probe.

2 Although the Supreme Court decided on the quo warranto petition against former Supreme Court Chief Justice Maria Lourdes A.Sereno only on 11 May 2018, she was no longer included in the performance probe because she had been on an indefinite leave since 01 March 2018.