June 2018 Nationwide Survey on the May 2019 Senatorial Elections

Pulse Asia Research, Inc. is pleased to share with you some findings on the May 2019 Senatorial Elections from the June 2018 Ulat ng Bayan national survey. We request you to assist us in informing the public by disseminating this information.

Based on a multistage probability sample of 1,800 registered voters 18 years old and above, Pulse Asia’s nationwide survey has a + 2% error margin at the 95% confidence level.  Subnational estimates for the geographic areas covered in the survey have the following error margins at 95% confidence level:  + 6% for Metro Manila, + 3% for the rest of Luzon and + 5% for each of Visayas and Mindanao. Those interested in further technical details may refer to our website (www.pulseasia.ph)

If the May 2019 elections were held during the survey period, 13 out of the 58 individuals included in this survey’s senatorial probe would have a statistical chance of winning. Practically all of the probable winners are either incumbent or former members of Congress. Senator Grace Poe registers a voter preference of 67.4% for a ranking of solo 1st place. Taguig City Representative Pia Cayetano’s probable bid to return to the Senate has the support of 55.7% of Filipinos. This translates to a 2nd place ranking. Another re-electionist, Senator Cynthia Villar, garners 50.1% voter preference that translates to a statistical ranking of 3rd to 4th places. Close behind is Davao City Mayor Sara Duterte Carpio, ranked 3rd to 5th with a 46.2% level of support. Completing the top five (5) is Senator Edgardo Angara, Jr. who  is backed by 41.9% of Filipinos. The latter’s ranking is 4th to 8th places. (Please refer to Table 1.)

The other probable winners if the May 2019 senatorial elections were held during the survey period are former Senator Jinggoy Estrada (37.9%), Bureau of Corrections (BuCor) Chief Ronald dela Rosa (37.7%), and Senator Aquilino Martin Pimentel III (37.7%), all of whom are ranked 5th to 12th; Senator Nancy Binay (37.1%, 6th to 12th places), former Senator Sergio Osmeña (36.6%), former Senator Lito Lapid (36.2%), and Senator JV Ejercito (35.6%), who all have a statistical ranking of 6th to 13th places; and, Senator Paolo Benigno Aquino (32.1%), who is ranked 10th to 16th. Only 4.8% of Filipinos are not inclined to support any of those listed in the senatorial probe.

With about 11 months to go before the midterm elections, a small majority of Filipinos (55%) already have a complete slate for the senatorial race. Majority figures are recorded in virtually all geographic areas and socio-economic groupings (55% to 63% and 54% to 59%, respectively), with the only exception being the rest of Luzon (47%). Furthermore, Filipinos are currently naming a mean of 9 and a median of 12 (out of a maximum of 12) of their preferred senatorial candidates. Across geographic areas and socio-economic classes, mean figures range from 9 to 10 while median figures vary from 10 to 12. (Please refer to Table 2.) 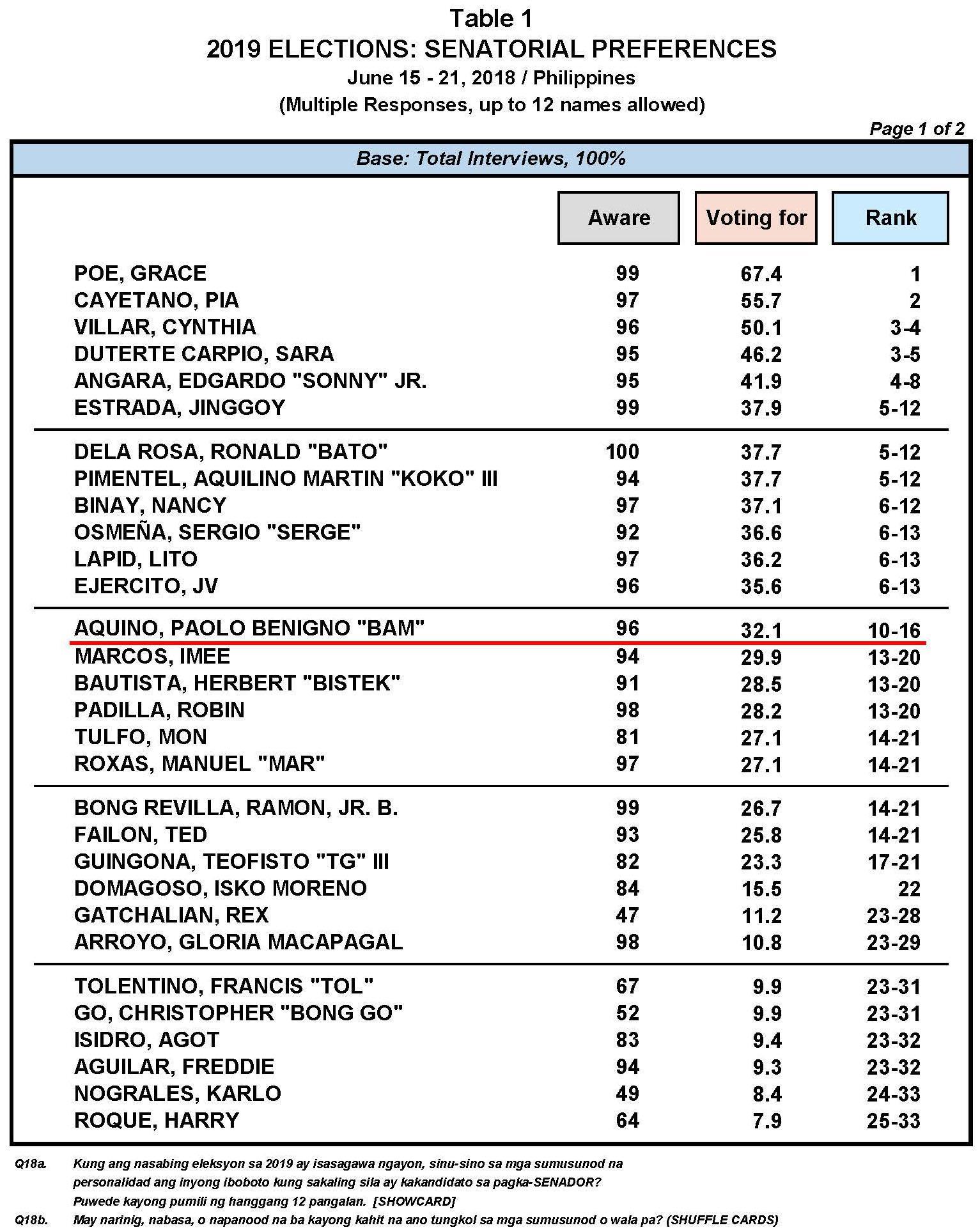 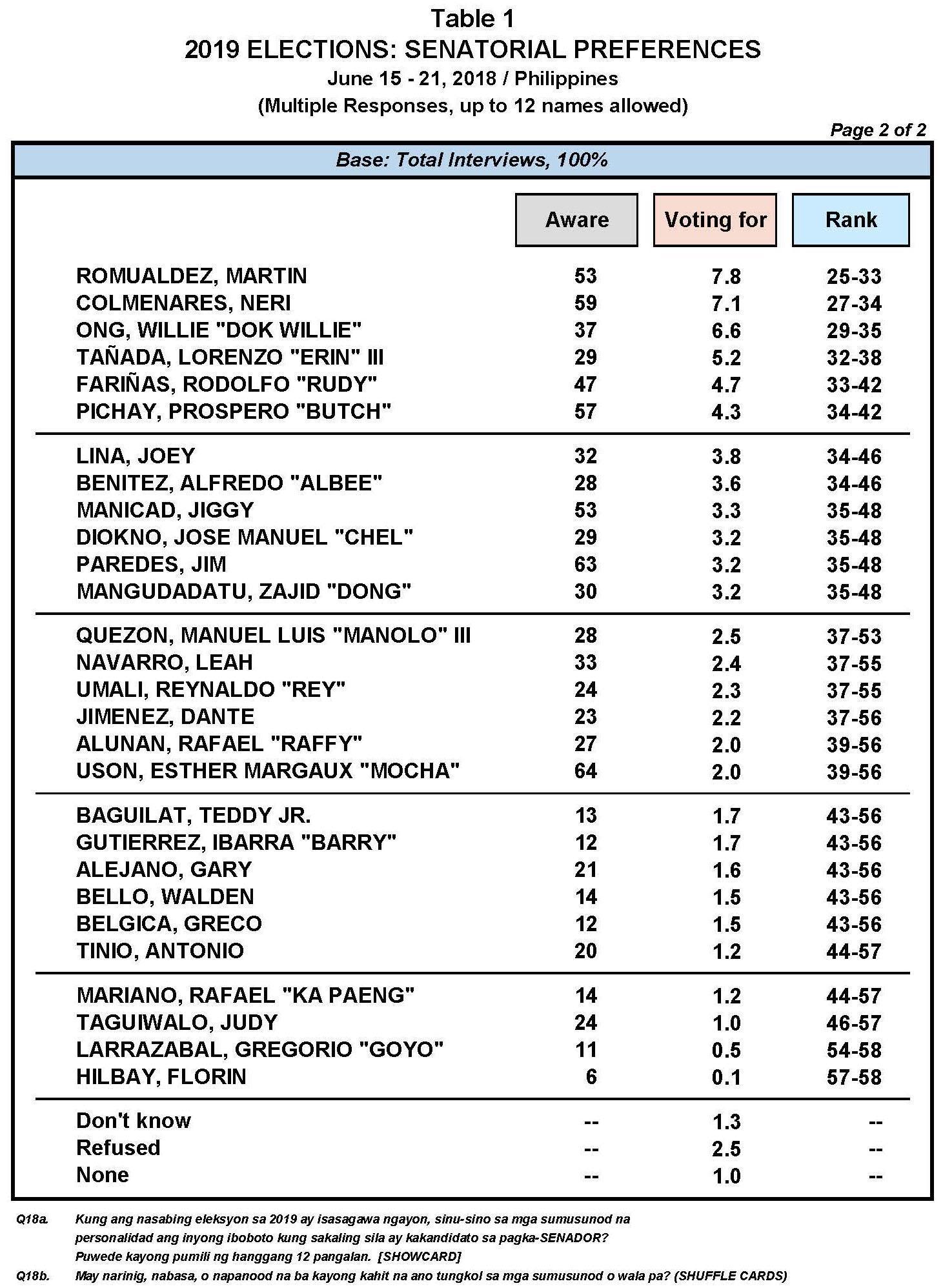 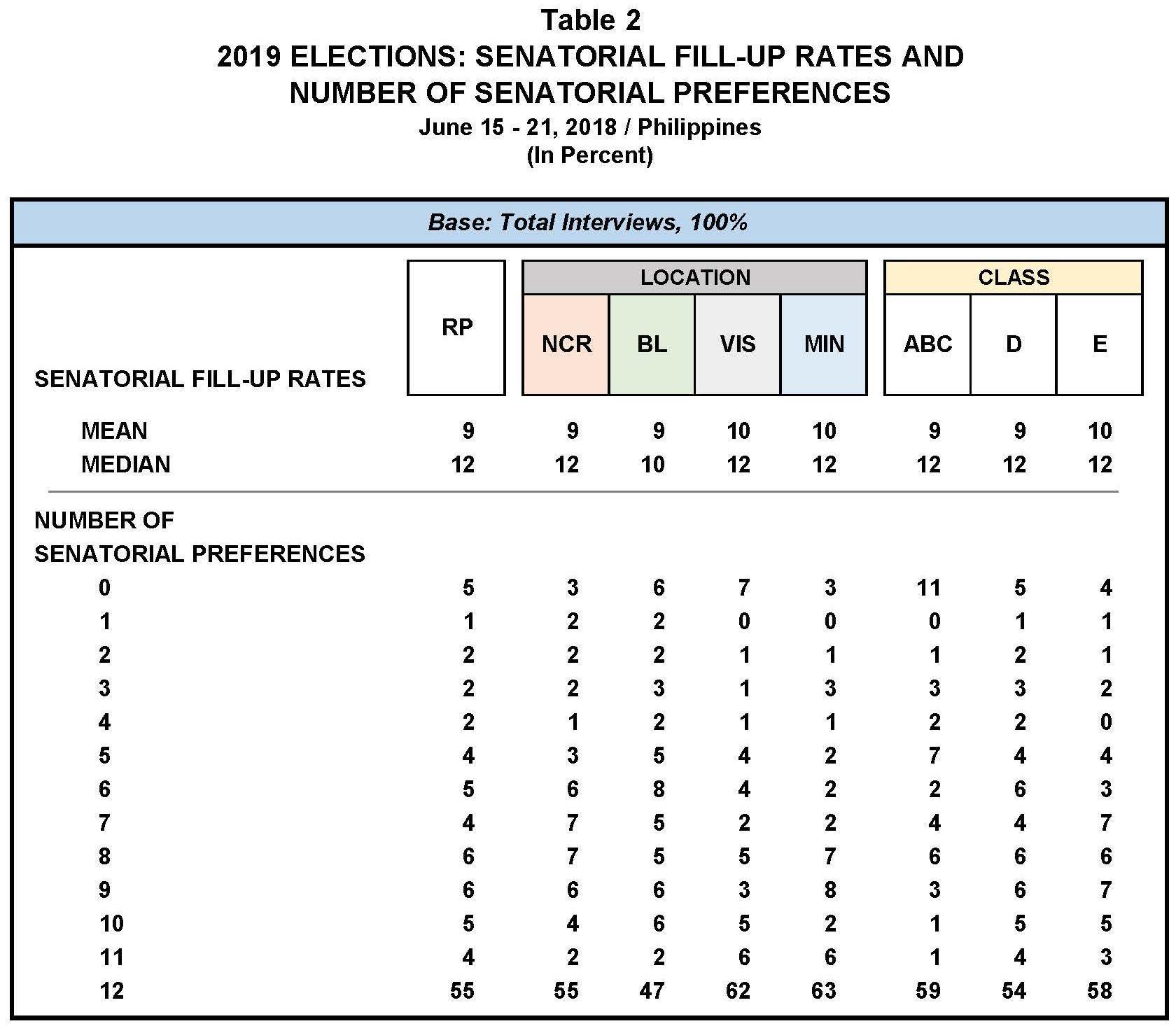