September 2018 Nationwide Survey on the May 2019 Senatorial Elections 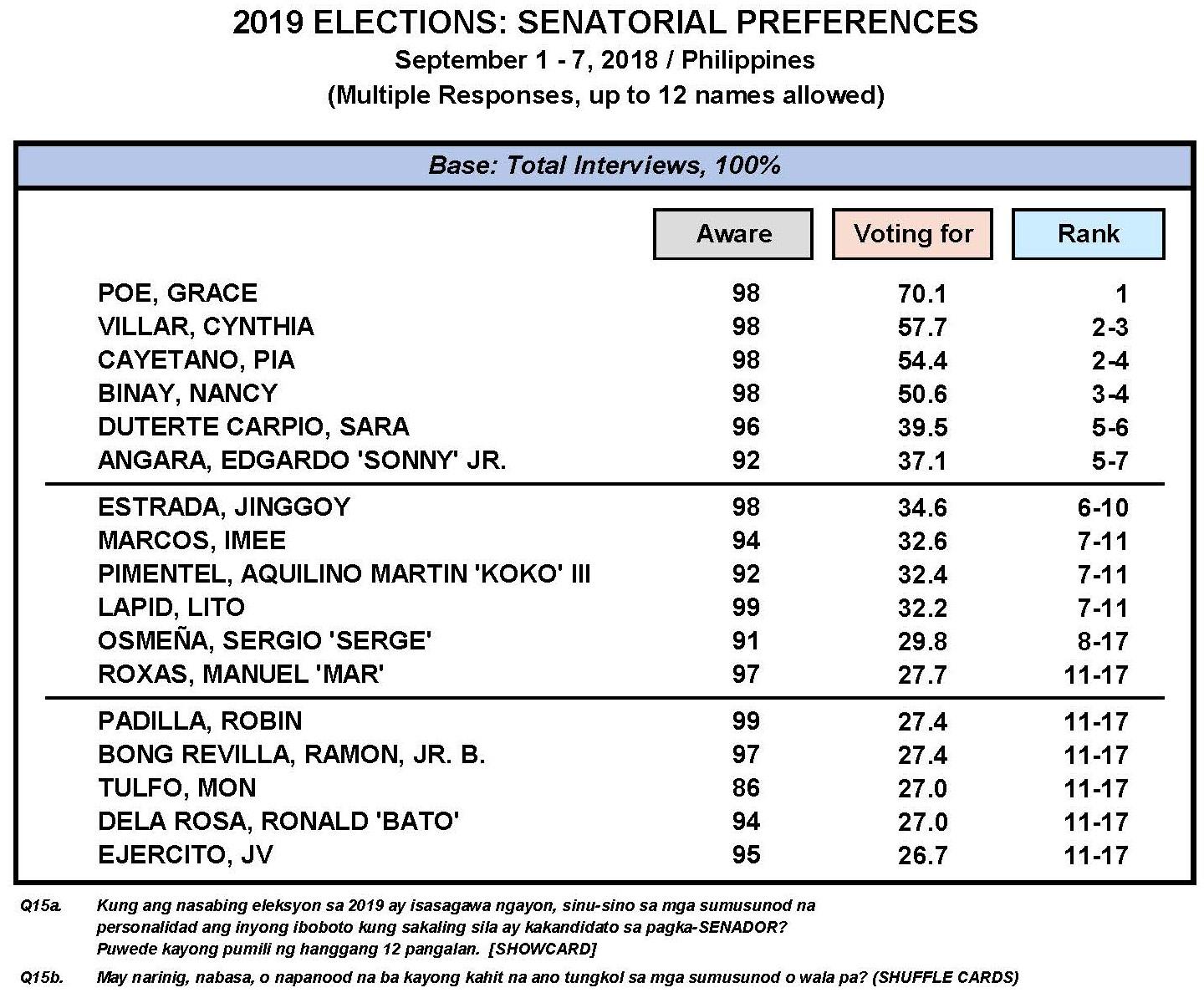 Pulse Asia Research, Inc. is pleased to share with you some findings on the May 2019 Senatorial Elections from the September 2018 Ulat ng Bayan national survey. We request you to assist us in informing the public by disseminating this information.

As in our previous Ulat ng Bayan surveys, this nationwide survey is based on a sample of 1,800 representative adults 18 years old and above. It has a ± 2.3% error margin at the 95% confidence level.  Subnational estimates for the geographic areas covered in the survey have the following error margins at 95% confidence level:  ± 6.5% for Metro Manila, ± 3.5% for the rest of Luzon, ± 5.2% for Visayas and ± 4.7% for Mindanao. Those interested in further technical details may refer to our website (www.pulseasia.ph)

Senator Grace Poe leads 66 probable candidates for the May 2019 senatorial elections; nearly half of Filipinos (49%) already have a complete slate for the said electoral exercise

If the May 2019 elections were held during the survey period, 17 out of the 66 individuals included in Pulse Asia Research’s September 2018 electoral probe would have a statistical chance of winning. Among the 17 probable winners, 13 are either incumbent or former members of Congress. Senator Grace Poe continues to enjoy the top spot with her voter preference of 70.1% translating to a statistical ranking of solo 1st place. Only 3.6% of Filipinos do not support any of the probable senatorial bets included in this survey probe, refuse to name their preferred senatorial candidates, or still do not know whom they will vote for in May 2019. (Please refer to Table 1.) 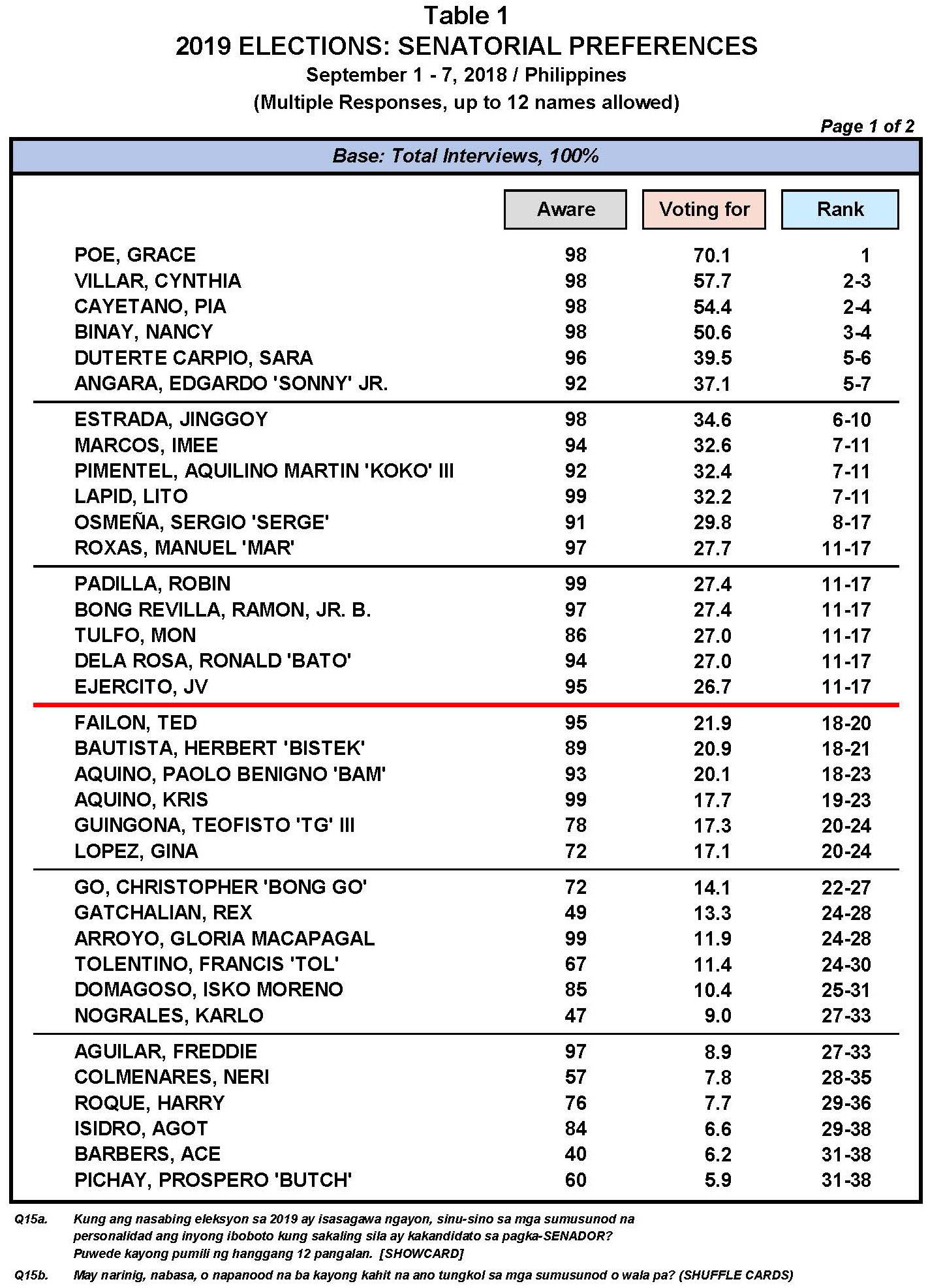 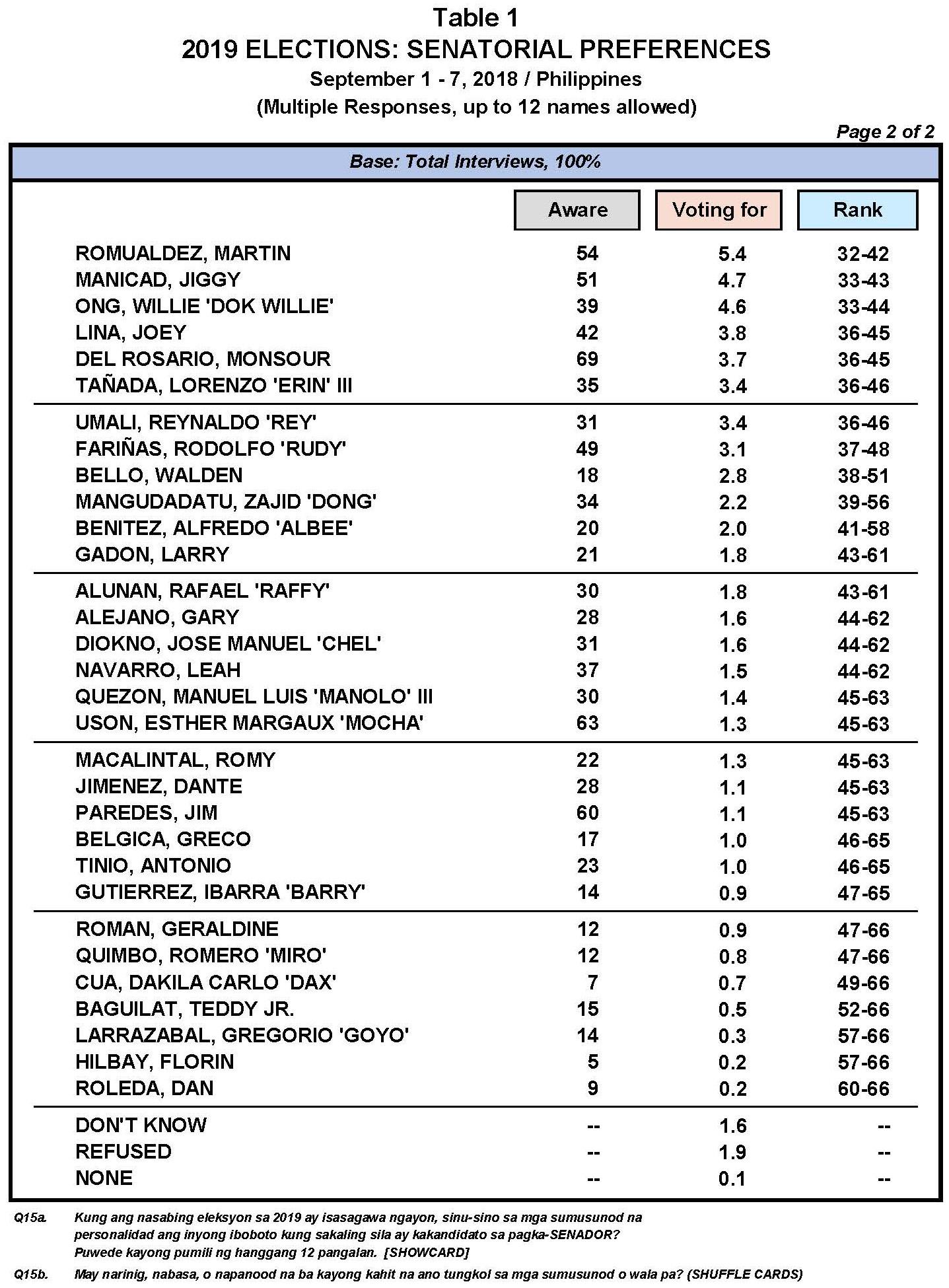 With about a month to go before the filing of certificates of candidacy for the May 2019 polls and some eight (8) months before the actual elections, practically half (49%) of Filipinos already have a complete line-up for the Senate (i.e., they are already identifying 12 senators whom they are inclined to vote for). Most of those in Class D (51%), Metro Manila (53%), and Mindanao (58%) are naming 12 of their preferred senatorial candidates for May 2019 while big pluralities to near majorities in Class E (43%), Class ABC (44%), the rest of Luzon (44%), and the Visayas (48%) also do the same. In addition, Filipinos are currently expressing support for an average of nine (9) and a median of 11 senatorial bets (i.e., out of a maximum of 12 candidates). (Please refer to Table 2.)