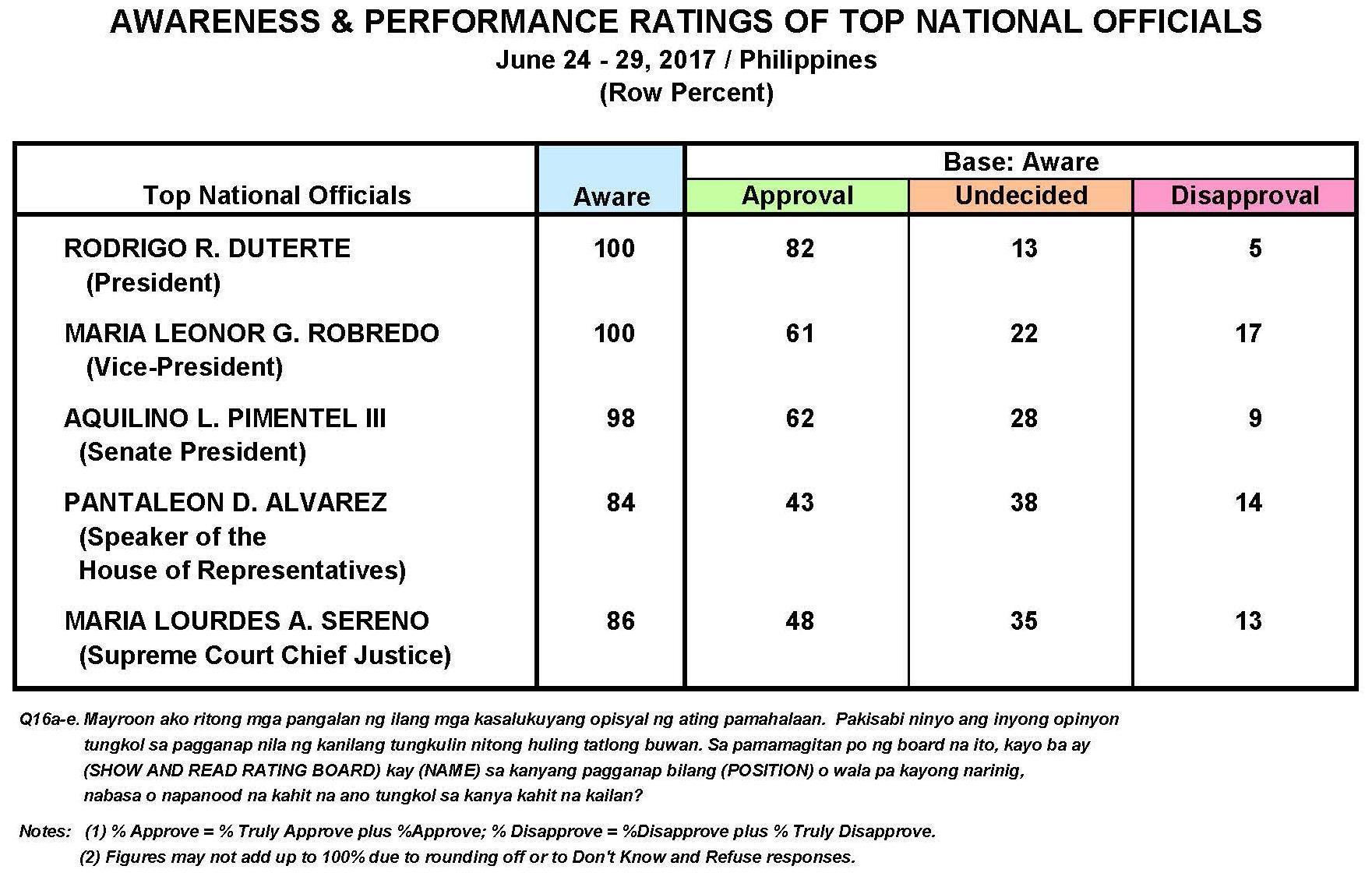 Pulse Asia Research, Inc. is pleased to share with you some findings on the Performance and Trust Ratings of the Top Philippine Government Officials and Key Government Institutions from the June 2017 Ulat ng Bayan national survey. We request you to assist us in informing the public by disseminating this information.

The survey fieldwork was conducted from June 24 – 29, 2017 using face-to-face interviews.

(1)  The crisis in Marawi City, Lanao del Sur which began on 23 May 2017 when government security forces launched an operation in the area to capture terrorist leader Isnilon Hapilon; the continuing fighting between government security forces and the Maute terrorist group that has resulted in the loss of lives on the part of both camps, the evacuation of thousands of civilians, and the destruction of property; President Duterte earlier vowed that the crisis would be over by the first week of June 2017 but this has not yet materialized;

(2)  The decision of President Rodrigo R. Duterte to declare martial law in the entire Mindanao region on the same day the siege in Marawi City began; Proclamation No. 216 provides for the imposition of martial law in Mindanao for a period of 60 days and the suspension of the writ of habeas corpus;

(3)  The expression of full support for the President’s martial law declaration by both Houses of Congress as they each adopted their own resolution backing Proclamation No. 216 (Senate Resolution No. 388 and House Resolution No. 1050, respectively);

(5)  Questions regarding the state of the President’s health following his absence during the celebration of Philippine Independence Day on 12 June 2017 and in the days that followed; amidst the President’s absence, Malacañang assured the public that he was not ill but was just resting;

(6)  The 02 June 2017 attack on Resorts World Manila by a former employee of the Department of Finance (DOF) which resulted in the death of 38 individuals (i.e., including the perpetrator himself);

(7)  The clash between members of the Bangsamoro Islamic Freedom Fighters (BIFF) and the military following an attack by the former on a militia outpost in Pigcawayan, North Cotabato on 22 June 2017; the military said the attack was not in any way connected to the Marawi siege and dismissed it as an “opportunistic activity” on the part of the BIFF;

(8)  The word war between House Speaker Pantaleon D. Alvarez and the Court of Appeals (CA) arising from the detention at the Batasan Complex of six (6) employees of the provincial government of Ilocos Norte; on 29 May 2017, the said employees were cited for contempt during a hearing into the alleged misuse of P 66.45 M in tobacco funds which were used by the provincial government to purchase motor vehicles;

(9)  The downgrading of the charges filed against members of the Criminal Investigation and Detection Group (CIDG) Region 8, headed by Chief Superintendent Marvin Marcos, from murder to homicide in connection with the killing of Albuera, Leyte Mayor Rolando Espinosa while in police custody back in November 2016;

(10)  The guilty verdict issued by the Sandiganbayan against former Presidential Commission on Good Government (PCGG) Chairperson Camilo Sabio in a case involving irregular vehicle lease deals entered into by the latter amounting to P 12.13 M and dating back to as early as 2007;

(11)  The approval on final reading by the House of Representatives of House Bill No. 5636 which aims to reduce personal income tax as well as to increase excise tax on oil and vehicles, to expand the base of the value-added tax (VAT), and to impose a tax on sugar-sweetened beverages and lotto winnings;

(12)  The order issued by the Department of Labor and Employment (DOLE) to stop the deployment of overseas Filipino workers (OFWs) to Qatar amidst the crisis in the country following the decision of several Arab nations to cut off diplomatic ties with Qatar due to its support for Islamist movements, including the Muslim Brotherhood;

(13)  The beginning of classes for grade school and high school students, with the Department of Education (DepEd) approving the request of 1,013 private elementary schools and high schools to increase their tuition for the incoming school year;

(14)  United States’ (US) President Donald Trump’s decision to pull out of the Paris climate change accord, citing that it is threat to the American economy and sovereignty”; in response to the US President’s desire to have the terms of the agreement renegotiated, the chief executives of France, Italy, and Germany said this is not possible since the accord is “irreversible”;

(15)  Following the 22 May 2017 terrorist attack in Manchester which killed 23 individuals (i.e., including the suicide bomber), terrorists staged another attack on 03 June 2017 in London which claimed the lives of eight (8) victims and all three (3) attackers; a fire that hit a residential tower in London on 14 June 2017, killing at least 80 people, of which only 34 have been identified due to the ferocity of the fire;

(16)  The glitches which affected the various electronic channels of the Bank of the Philippine Islands (BPI) and several ATM machines of the Banco de Oro (BDO); BPI attributed the bank’s problem to “data processing error” while BDO said the questionable transactions involving its ATM machines were due to skimming; and

For any clarification or questions, kindly contact Ronald D. Holmes, Pulse Asia Research President at 09189335497 (via mobile or Viber) or at ronald.holmes@gmail.com (via email.)

[1] The Supreme Court’s decision affirming the President’s declaration of martial law in the Mindanao region by a vote of 11-3-1 was issued on 04 July 2017 during which time the interviews for this survey have already been concluded.

Sizeable to big majority approval scores are enjoyed by three (3) of the country’s leading government officials – President Rodrigo R. Duterte (82%), Vice-President Maria Leonor G. Robredo (61%), and Senate President Aquilino L. Pimentel III (62%). Practically the same approval and indecision ratings are posted by House Speaker Pantaleon D. Alvarez (43% versus 38%) while a near majority of Filipinos (48%) approve of the work done by Supreme Court Chief Justice Maria Lourdes A. Sereno. The disapproval ratings of these officials vary from 5% for President Duterte to 17% for Vice-President Robredo. Ambivalence toward their performance is most marked toward House Speaker Alvarez (38%) and least manifest in the case of President Duterte (13%). (Please refer to Table 1.) 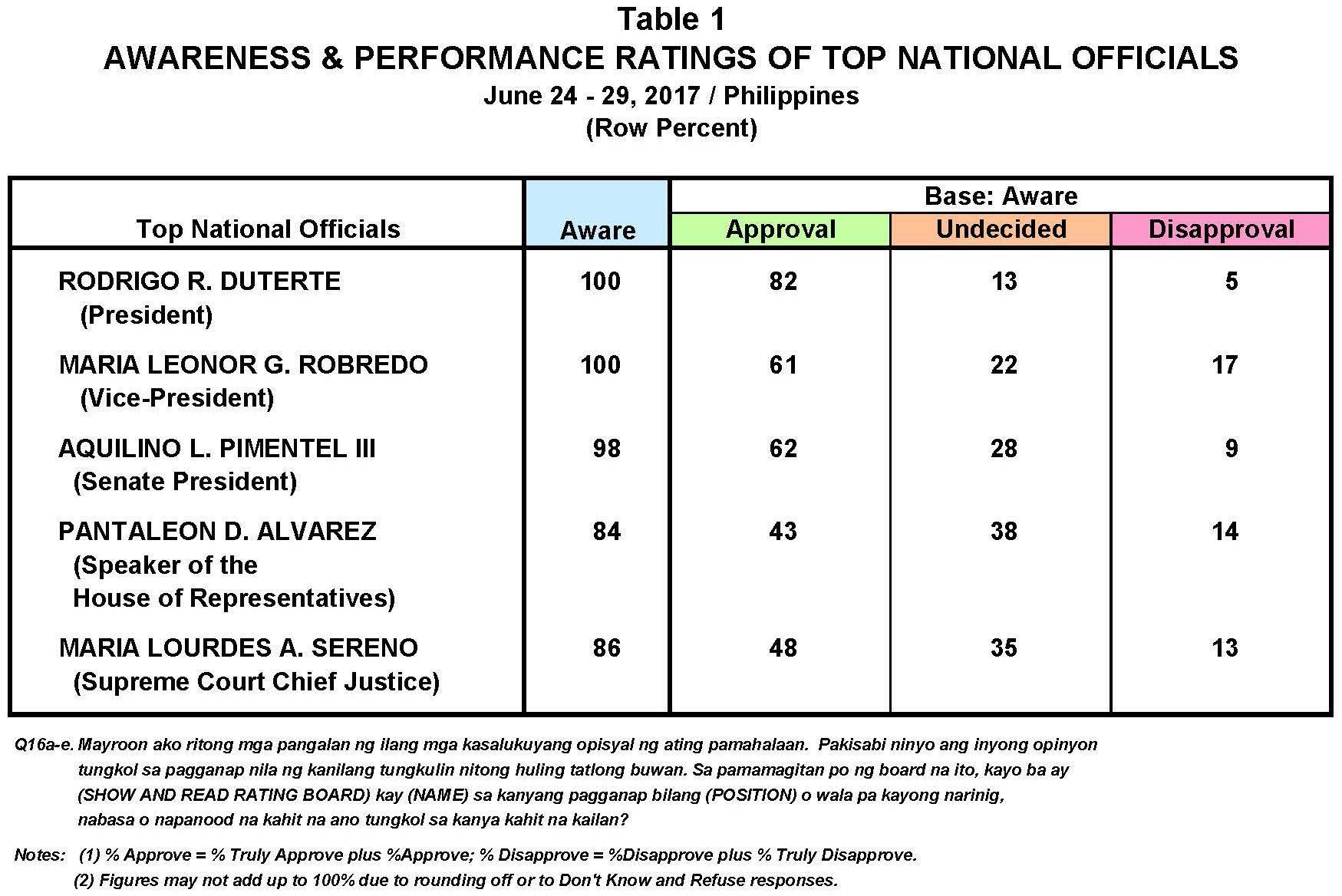 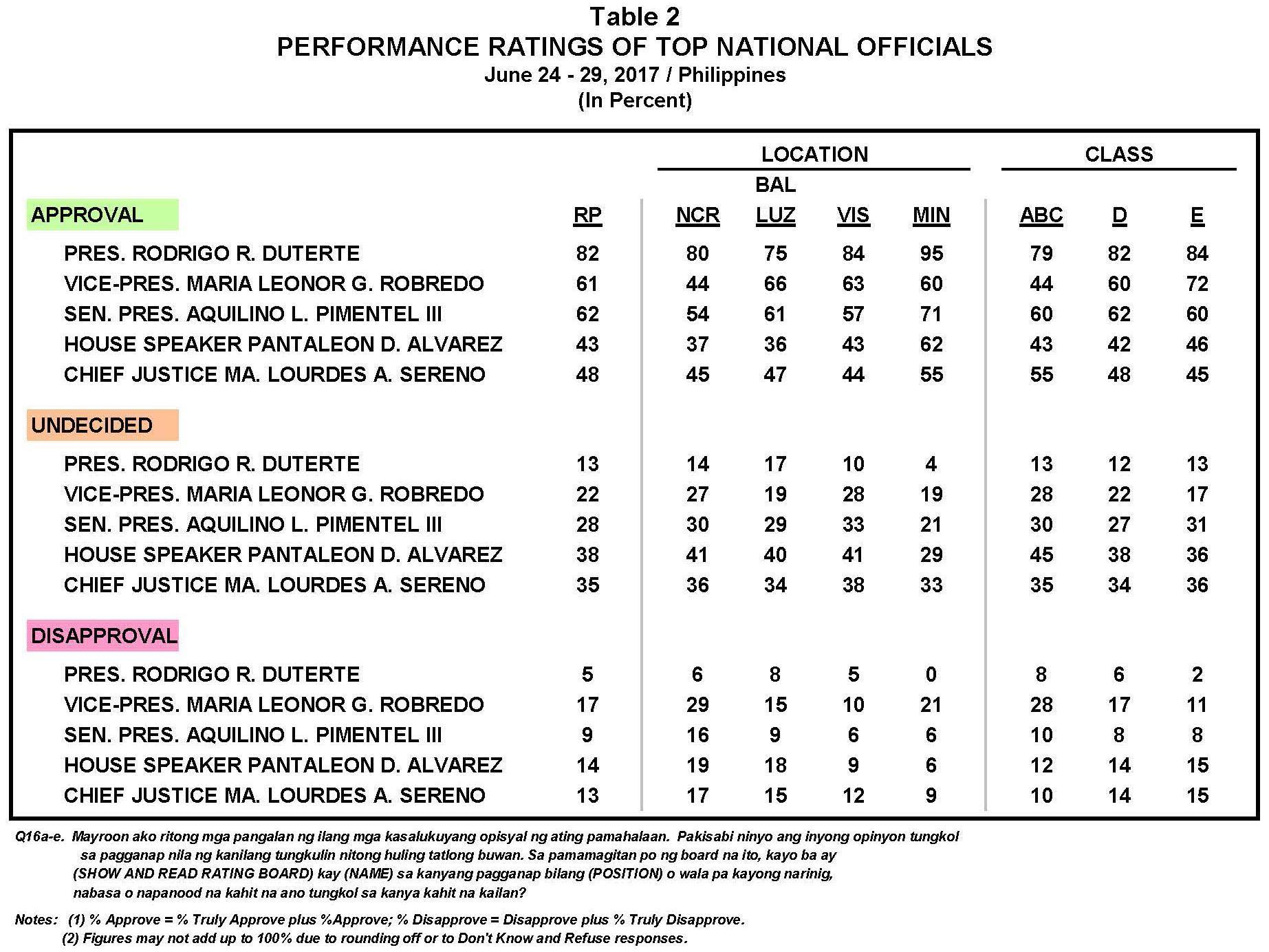 During the period March to June 2017, the only significant changes in the performance ratings of the leading national government officials are recorded by Senate President Pimentel. The lawmaker experiences an increase of 7 percentage points in his overall approval rating while his national indecision figure drops by the same margin. Meanwhile, Senate President Pimentel also enjoys an improvement in his approval score (+8 percentage points) and a decline in the level of ambivalence toward his work (-10 percentage points), both in Class D. (Please refer to Table 3.) 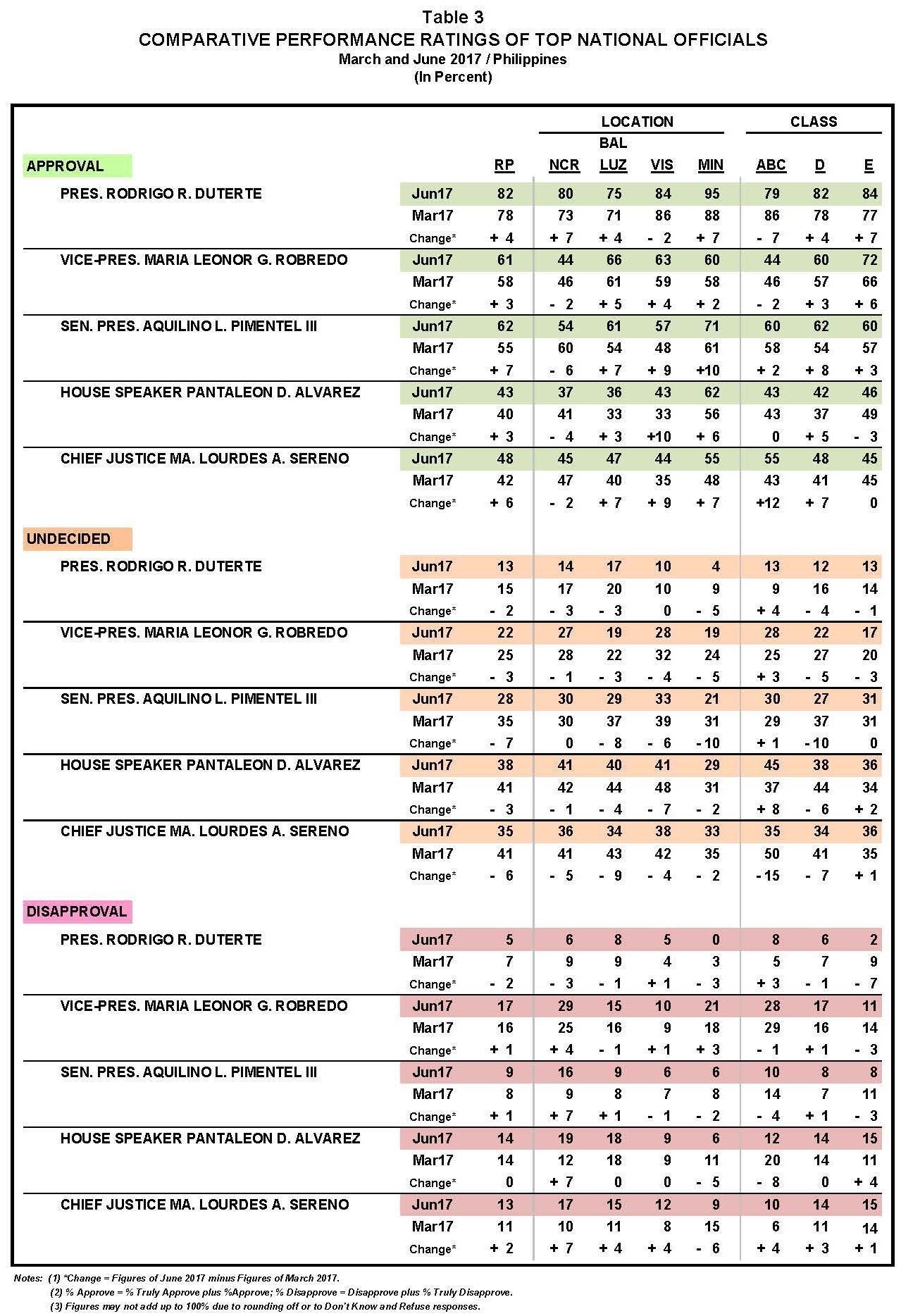 President Duterte (81%), Vice-President Robredo (60%), and Senate President Pimentel (58%) are trusted by most Filipinos; public opinion regarding the trustworthiness of the country’s national government officials is generally unchanged between March and June 2017

Trust is the majority sentiment toward President Duterte (81%), Vice-President Robredo (60%), and Senate President Pimentel (58%) in June 2017. On the other hand, 41% of Filipinos either trust House Speaker Alvarez or are ambivalent about his trustworthiness while Supreme Court Chief Justice Sereno records basically the same trust and indecision figures (43% versus 39%). Levels of distrust in these officials range from 5% for President Duterte to 17% for Vice-President Robredo. Numerically speaking, House Speaker Alvarez has the highest indecision figure (41%) while the lowest one is posted by President Duterte (14%). (Please refer to Table 4.) 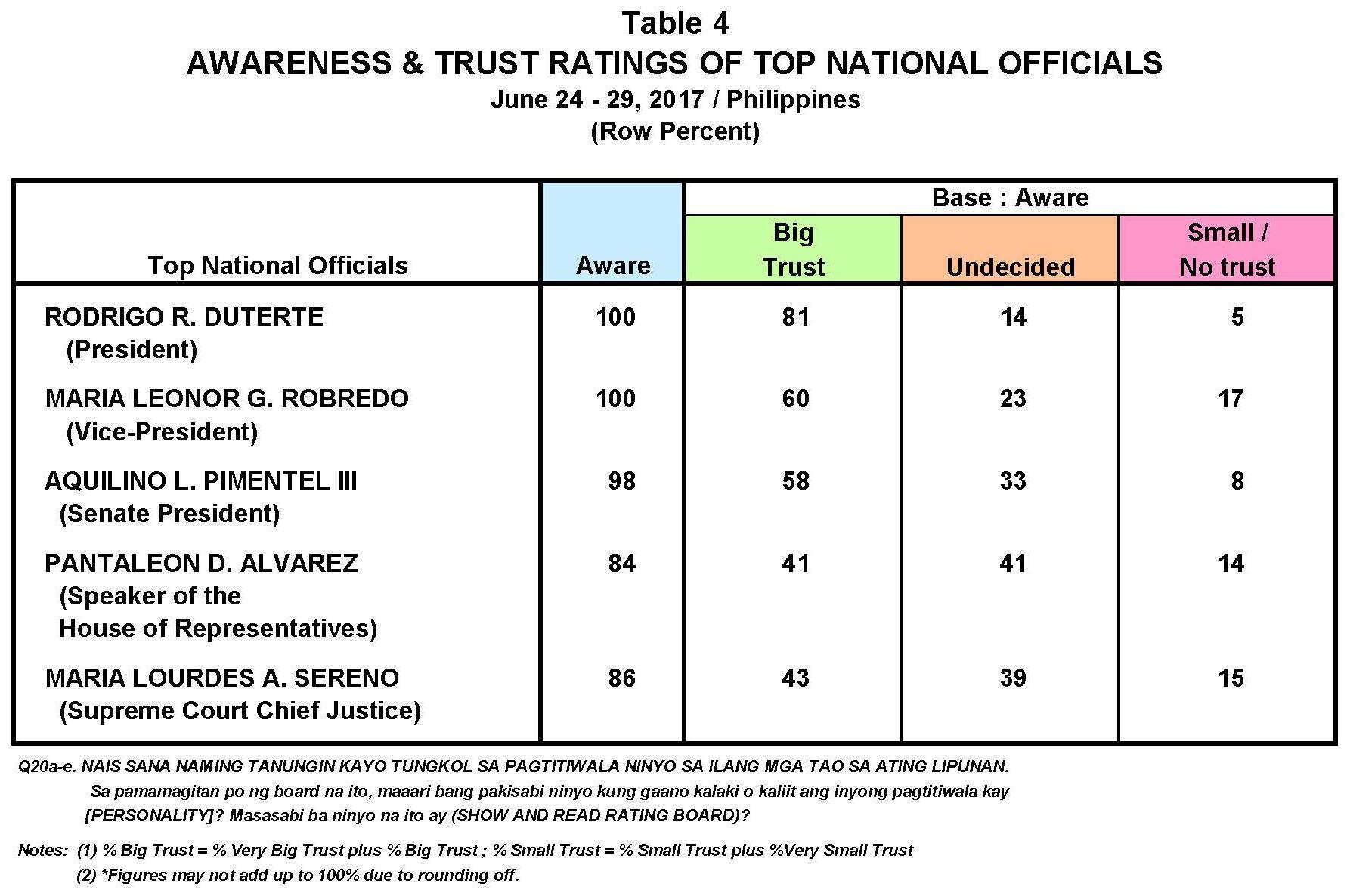 Majority trust ratings are obtained by President Duterte and Senate President Pimentel in all geographic areas (73% to 97% and 53% to 69%, respectively) and socio-economic groupings (77% to 85% and 55% to 62%, respectively). In the case of Vice-President Robredo, she receives majority trust ratings from those in most geographic areas and socio-economic groupings (57% to 66% and 60% to 69%, respectively), with the exception of Metro Manilans (44%) and those in Class ABC (43%). (Please refer to Table 5.)

As for House Speaker Alvarez, most Mindanawons trust him (57%) while most of those in Class ABC cannot say if they trust or distrust him (51%). The House Speaker registers nearly the same trust and indecision ratings in the other geographic areas (34% to 40% versus 43% to 48%) and socio-economic classes (40% to 45% versus 39% to 41%). Meanwhile, half of Mindanawons (50%) trust Supreme Court Chief Justice Sereno while almost the same percentages of those in the other geographic areas and socio-economic groupings either trust her (38% to 42% and 41% to 44%, respectively) or are ambivalent toward her trustworthiness (36% to 46% and 38% to 41%, respectively). 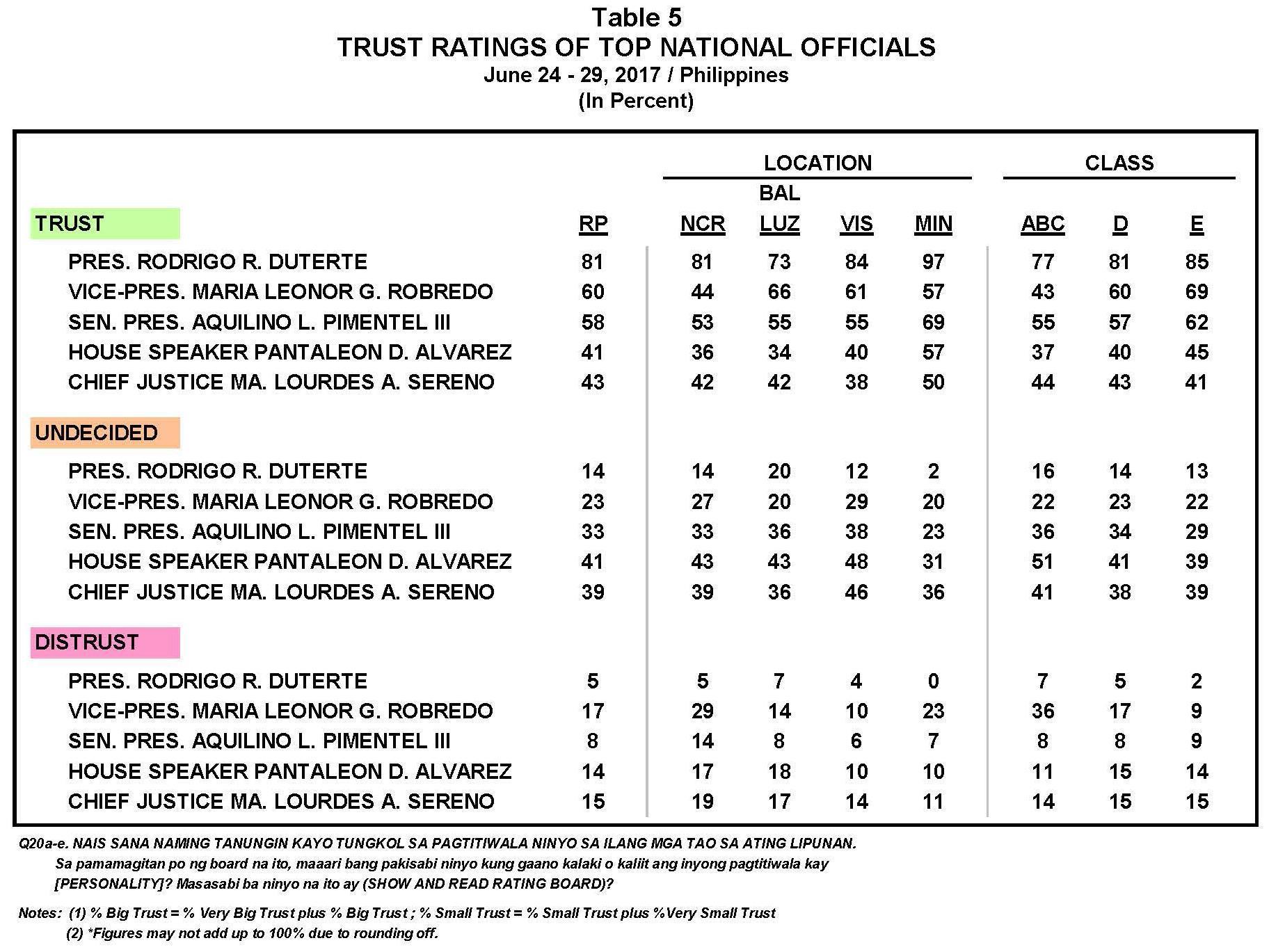 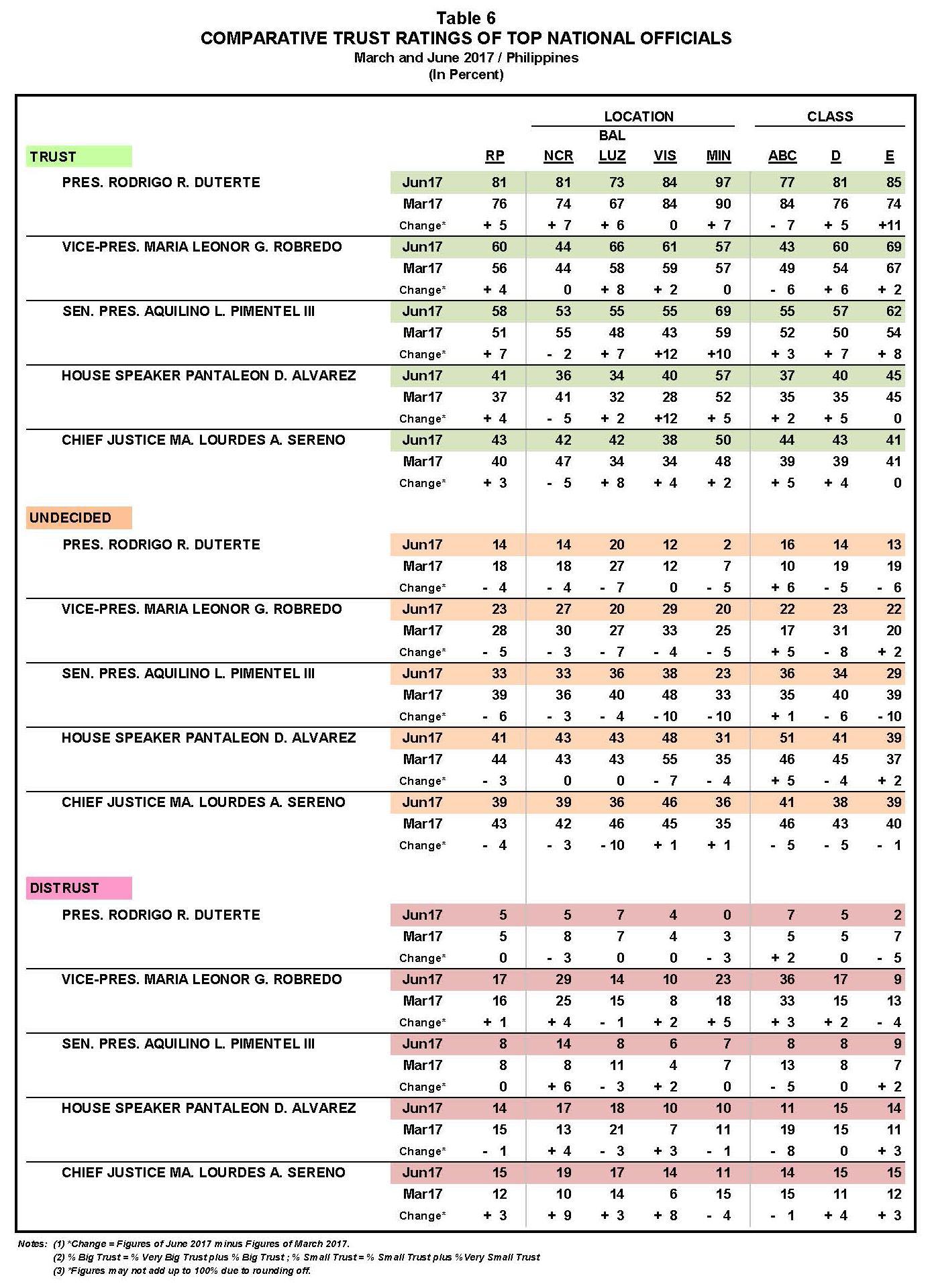 The Congress and the Supreme Court register majority approval and trust ratings in June 2017; Filipinos’ assessment of these entities’ performance is practically constant between March and June 2017 but there are a few marked changes in their trust ratings at this time

The House of Representatives (55%), the Supreme Court (58%), and the Senate (59%) score majority approval ratings in June 2017. These key government institutions also record essentially the same indecision figures (30% to 34%) and disapproval ratings (10% to 12%). There are no notable changes in the performance ratings of these entities between March and June 2017, both at the national level and across geographic areas and socio-economic groupings. (Please refer to Tables 7 to 8.)

Majority approval ratings are posted by the Senate in each geographic area and socio-economic class (51% to 73% and 56% to 64%, respectively). On the other hand, the House of Representatives and the Supreme Court have majority approval scores in most geographic areas (52% to 71% and 60% to 68%, respectively) and all socio-economic classes (54% to 57% and 56% to 62%, respectively). In both cases the exception is the rest of Luzon where 48% and 50% of the residents appreciate the work done by the House of Representatives and the Supreme Court, respectively. (Please refer to Table 7.) 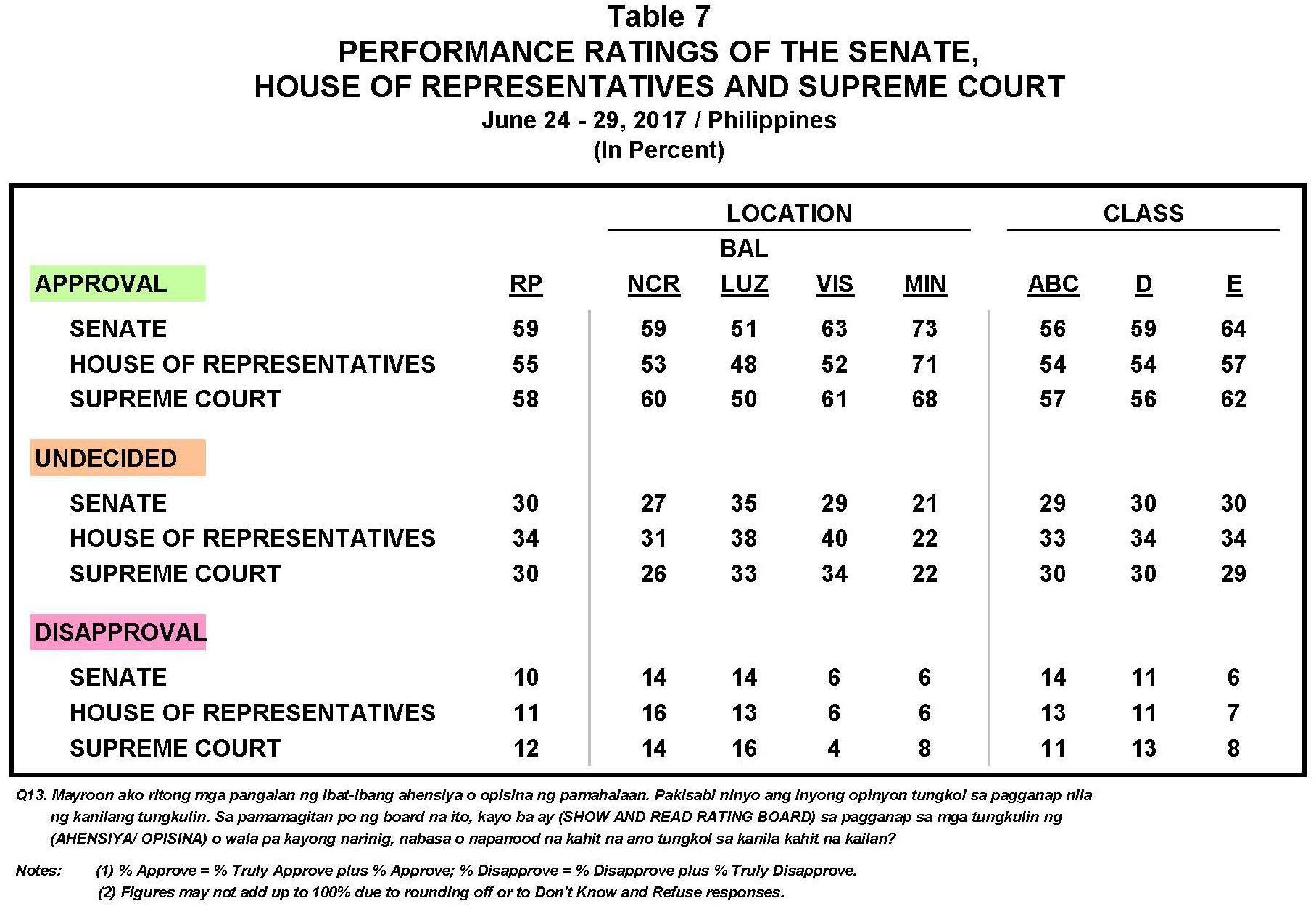 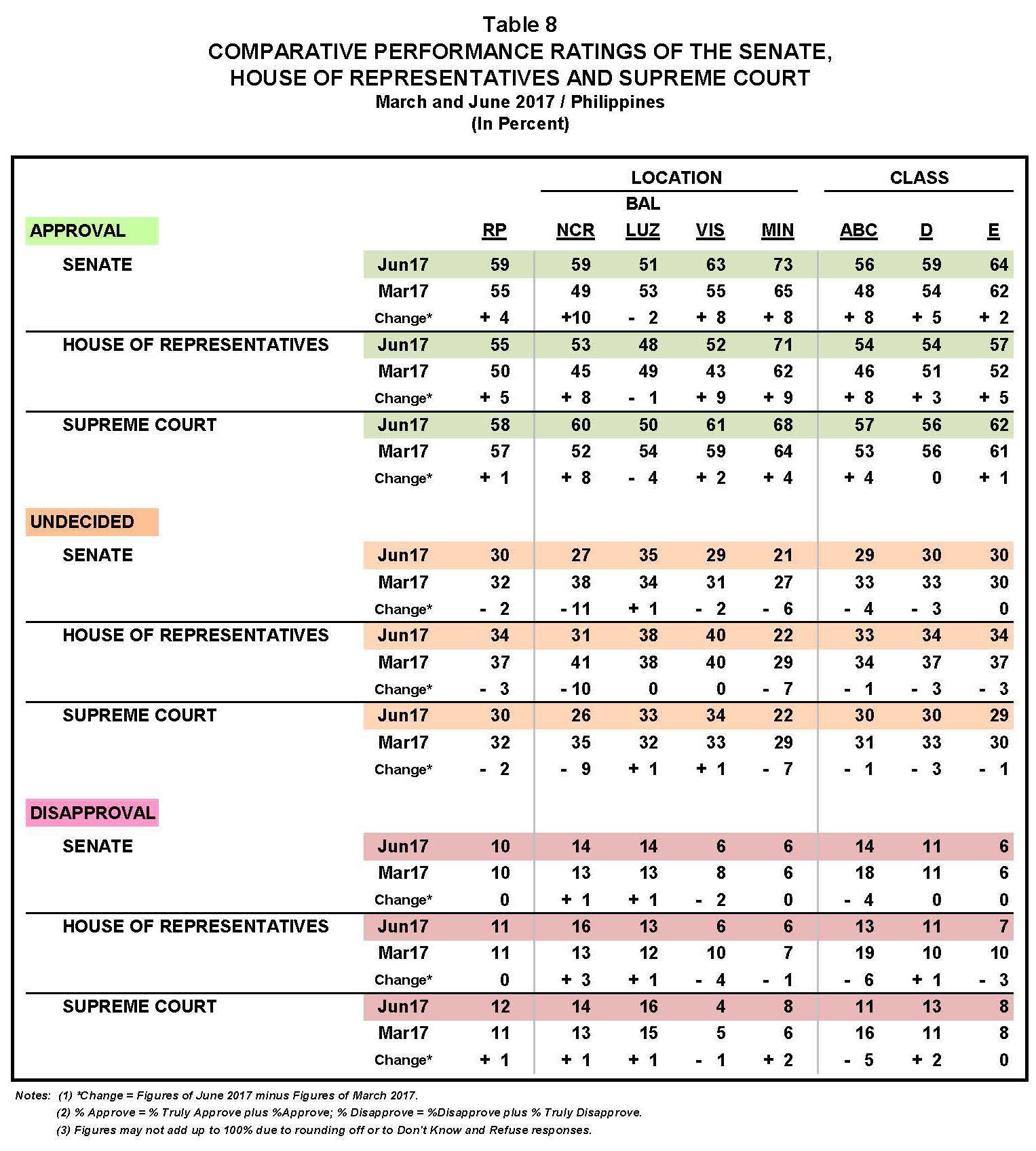 Similarly, these government institutions enjoy the trust of most Filipinos – the House of Representatives (52%), the Supreme Court (56%), and the Senate (57%). Around the same percentages of Filipinos cannot say if they trust or distrust these entities (34% to 39%) while they record nearly the same distrust figures (8% to 10%). (Please refer to Table 9.) 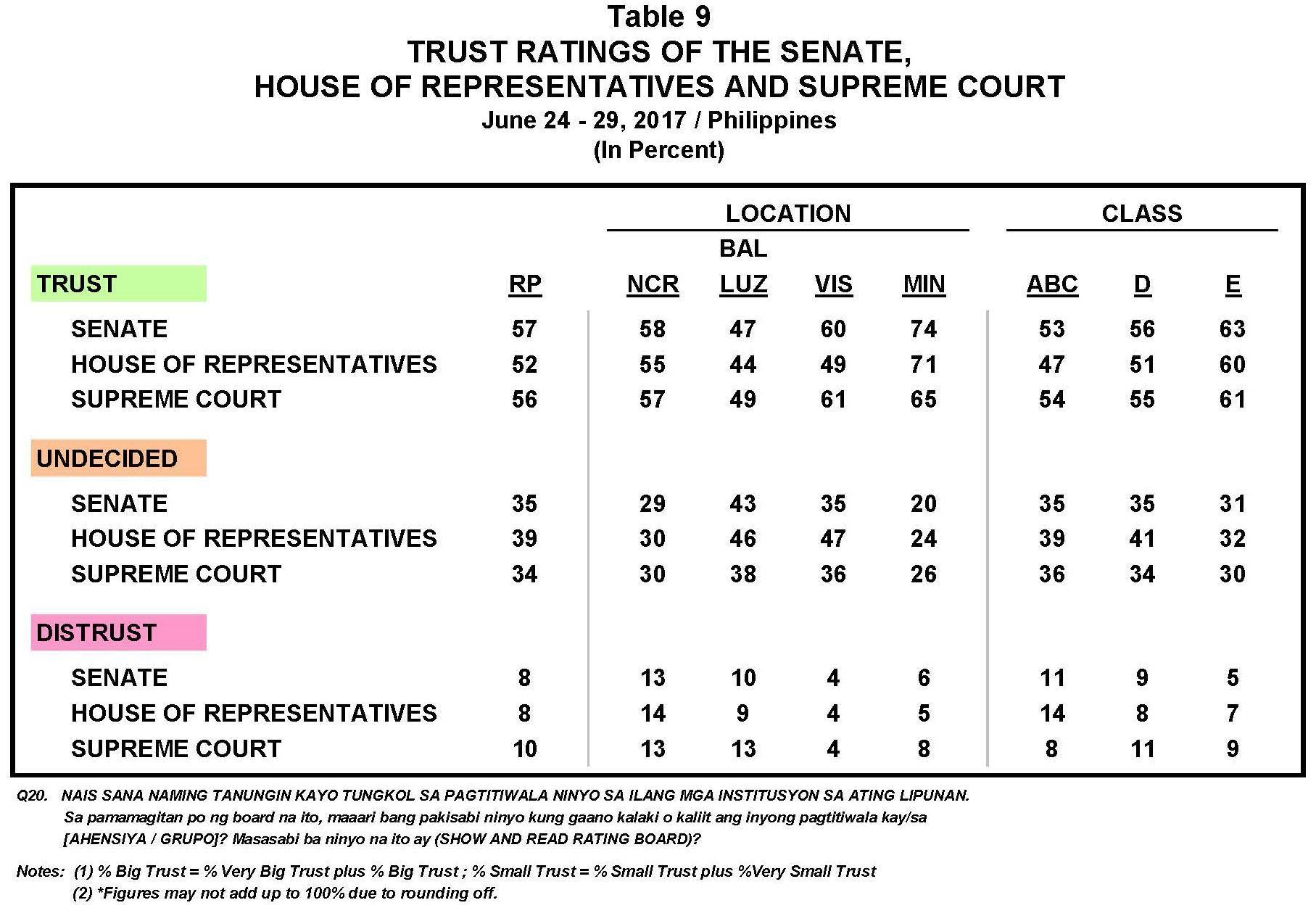 The overall trust ratings of these entities are essentially unchanged between March and June 2016. However, there are a few significant movements across geographic areas, particularly in the cases of both House of Congress. The Senate experiences improvements in its trust scores in the Visayas and Mindanao (+15 and +12 percentage points, respectively). In the same way, the trust ratings of the House of Representatives go up in Metro Manila and Mindanao (+12 and +13 percentage points, respectively). On the other hand, indecision toward the latter’s trustworthiness eases in Metro Manila (-16 percentage points). (Please refer to Table 10.) 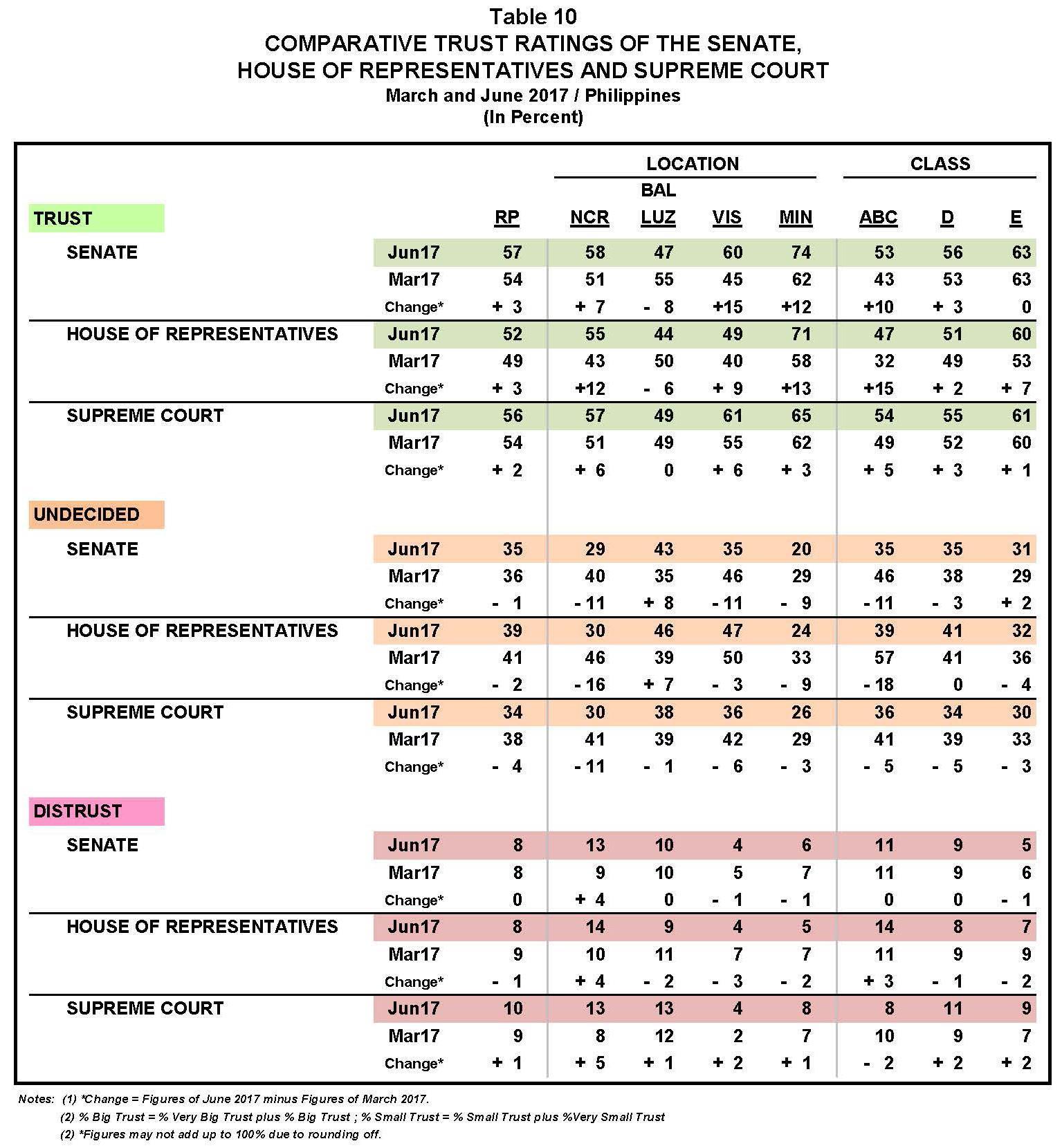