Pulse Asia Research, Inc. is pleased to share with you some findings on the May 2016 Elections from the July 2016 Ulat ng Bayan national survey. We request you to assist us in informing the public by disseminating this information.

The survey fieldwork was conducted from July 2 to 8, 2016 using face-to-face interviews.

The following news developments preoccupied Filipinos immediately before and during the conduct of the interviews for this nationwide survey:

(3) The filing of cases against former President Benigno S. Aquino III in connection with his administration’s Disbursement Acceleration Program (DAP) and the Mamasapano encounter on 25 January 2015 which resulted in the death of 44 members of the Philippine National Police-Special Action Force (PNP-SAF);

(4) The bills filed by Senator Franklin M. Drilon granting emergency powers to President Duterte to enable him to address the traffic crisis in Metro Manila and other key cities across the country, by Negros Occidental Representative Alfredo Benitez calling on Congress to sit as a constituent assembly to amend the 1987 Philippine Constitution for the purpose of changing the country’s form of government to a federal form, and by Davao del Norte Representative Pantaleon Alvarez and Capiz Representative Fredenil Castro reimposing the death penalty through lethal injection;

(5) The spate of drug-related killings in various parts of the country and calls for a congressional investigation into the matter; President Duterte’s naming of five (5) former and incumbent police officials as drug lord coddlers, an accusation which these officers denied;

(6) The decision of President Duterte’s economic managers to reduce the national growth targets for 2016 and 2017;

(7) The impending implementation of the executive order on freedom of information (FOI) to be issued by President Duterte in mid-July 2016;

(8) The expression of willingness by President Duterte to engage in bilateral talks and joint exploration with China in disputed areas in the West Philippine Sea; and

(9) The increase in the electricity bills to be paid by Manila Electric Co. (Meralco) customers in July 2016 by 29 centavos per kilowatt-hour due to higher generation charges.

Most Filipinos express a positive opinion as regards the conduct of the recent national elections in their place. In particular, virtually all Filipinos are of the view that the release of the results of the May 2016 elections in their place was fast (92%), characterize the conduct of the elections in their place as orderly (93%), and say they did not observe any incidence of electoral violence (95%). Meanwhile, sizeable to huge majorities opine that there was no vote buying and cheating in their area (66% and 83%, respectively) and describe the electoral results as believable (89%). These are the predominant sentiments across geographic areas and socio-economic classes. For the most part, these figures are generally the same as those recorded by Pulse Asia Research in June 2013 when survey respondents were asked to evaluate the conduct of the May 2013 elections based on the same standards. The only exception is the bigger percentage of Filipinos who say there was no vote buying in their place during the May 2016 elections (66%) compared to the percentage of those observing no vote-buying in May 2013 (59%). (Please refer to Table 1.) 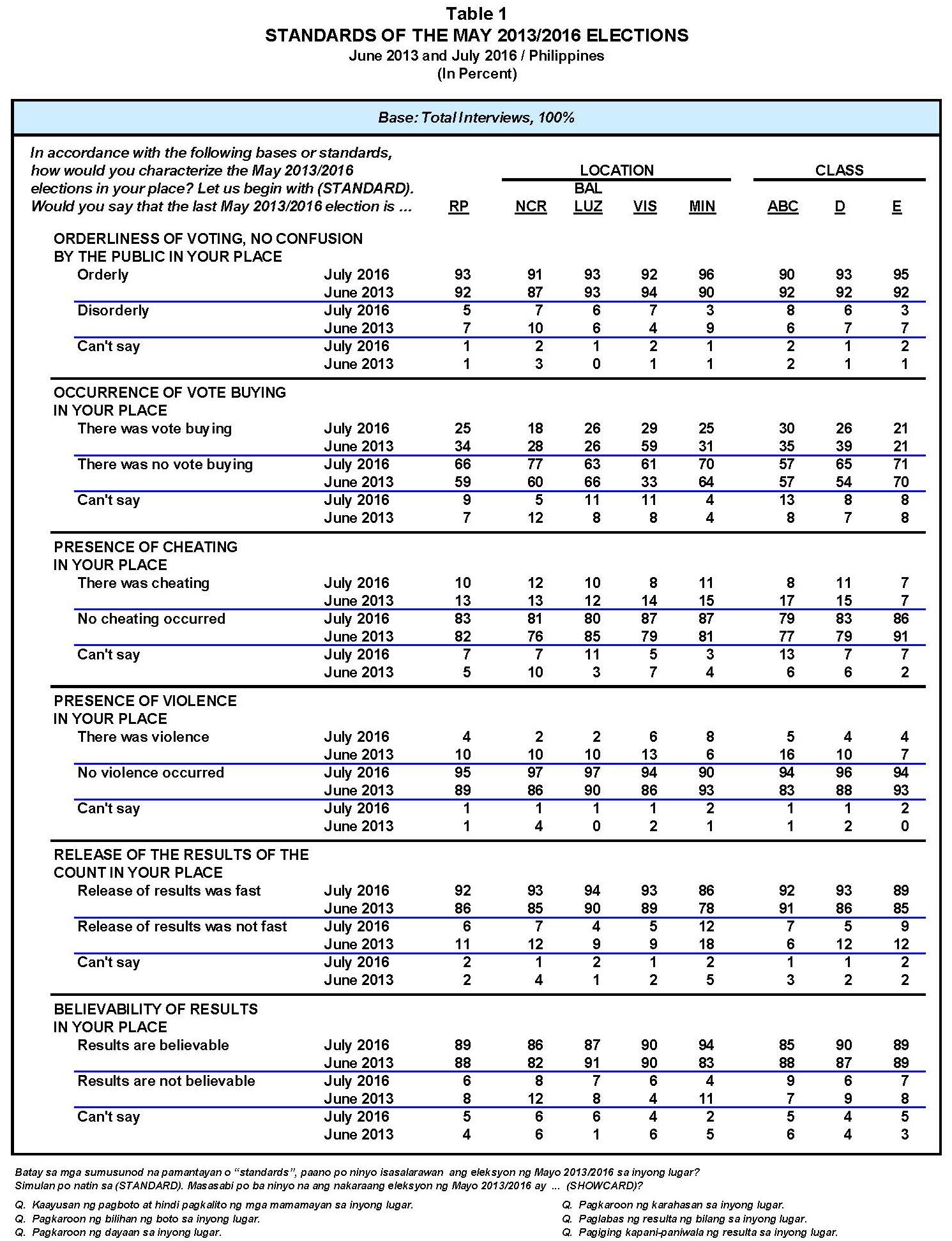 Sizeable to big majorities consider the results of the most recent elections to be more credible (63%) and the pace of the release of electoral results to be faster (78%) compared to the May 2010 elections. These are the majority opinions in every geographic area (55% to 71% and 74% to 81%, respectively) and socio-economic groupings (59% to 65% and 75% to 81%, respectively). Meanwhile, a big plurality of Filipinos (41%) are of the view that there was less incidence of cheating in the May 2016 elections than in May 2010. This is shared by majorities in Mindanao (51%) and Metro Manila (52%) while sizeable to big pluralities in the Visayas (38%) and Class D (43%) also express this sentiment. In the rest of Luzon, almost the same percentages say there was less cheating in May 2016 (34%), express indecision on the matter (27%) or are of the view that the May 2010 and May 2016 elections are the same in that little cheating occurred during both electoral exercises. On the other hand, in Class ABC, virtually the same percentages opine either that there was less cheating in May 2016 (36%) or that there was little cheating during both the May 2010 and May 2016 elections (34%). As far as those in Class E are concerned, around the same percentages either observed less cheating now (38%) or are ambivalent on the matter (27%). (Please refer to Table 2.) 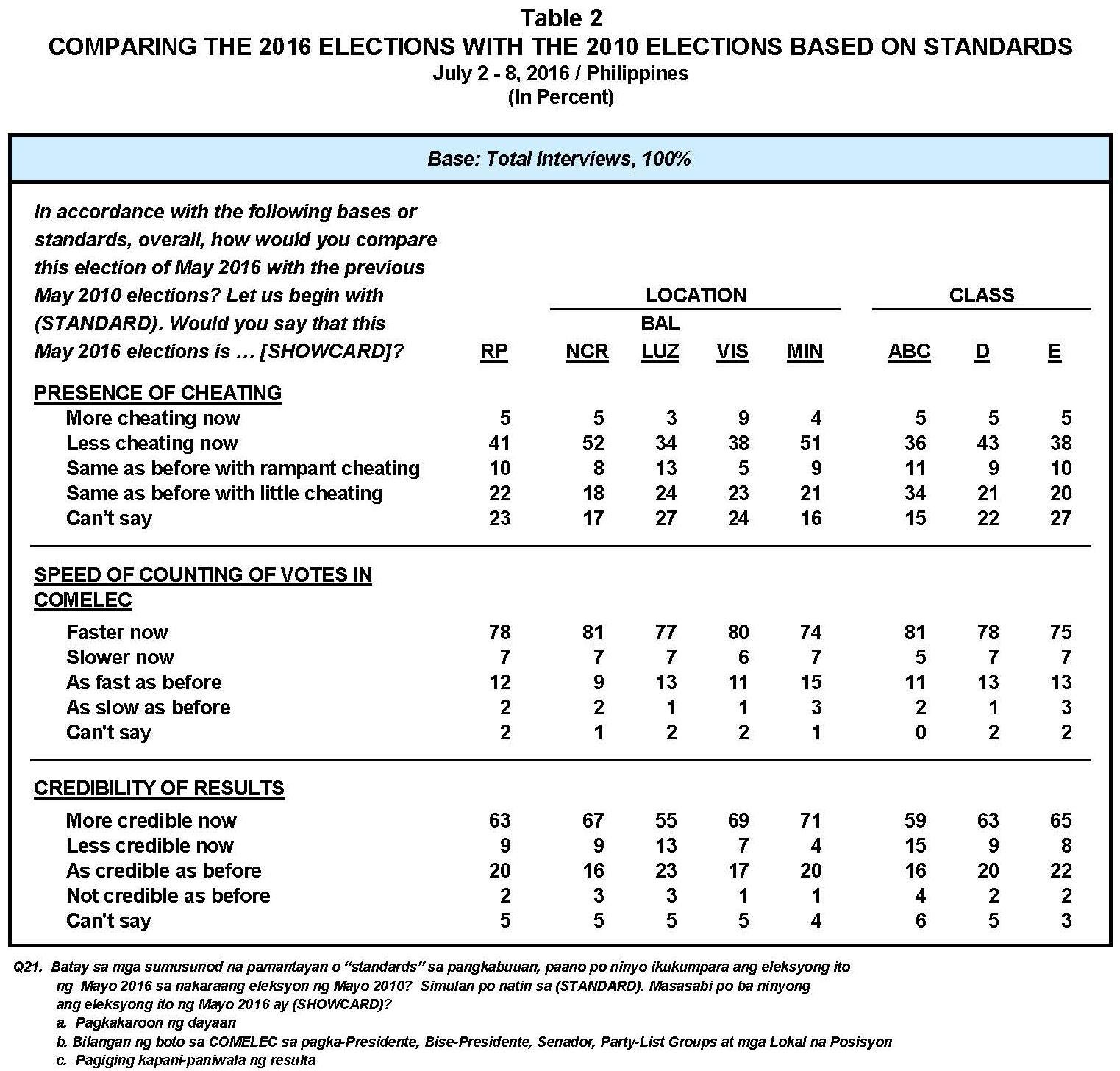 Less than a quarter of Filipinos (22%) admit to having been offered money or any material thing in exchange for their vote during the May 2016 elections, with most of them (74%) accepting the offer 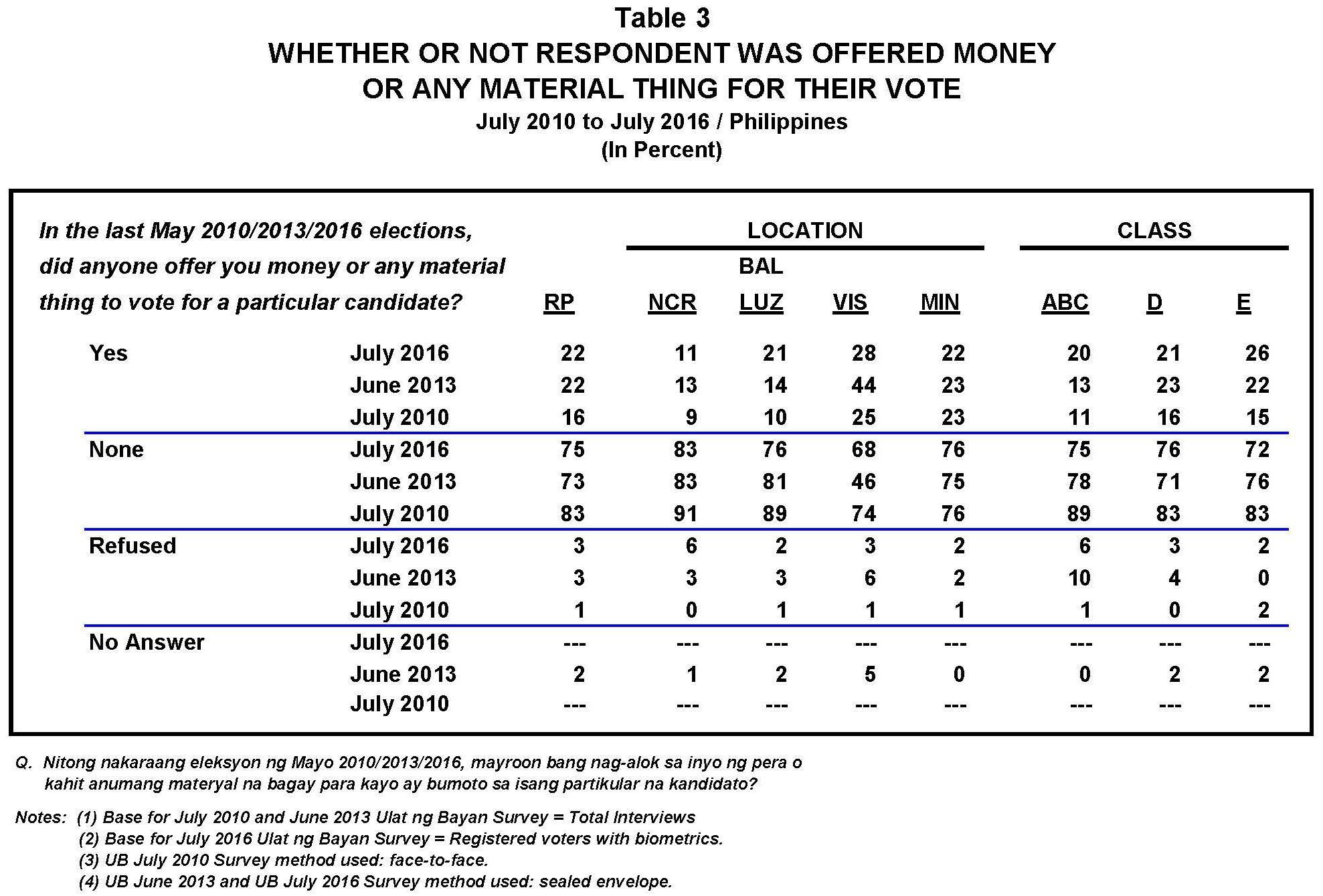 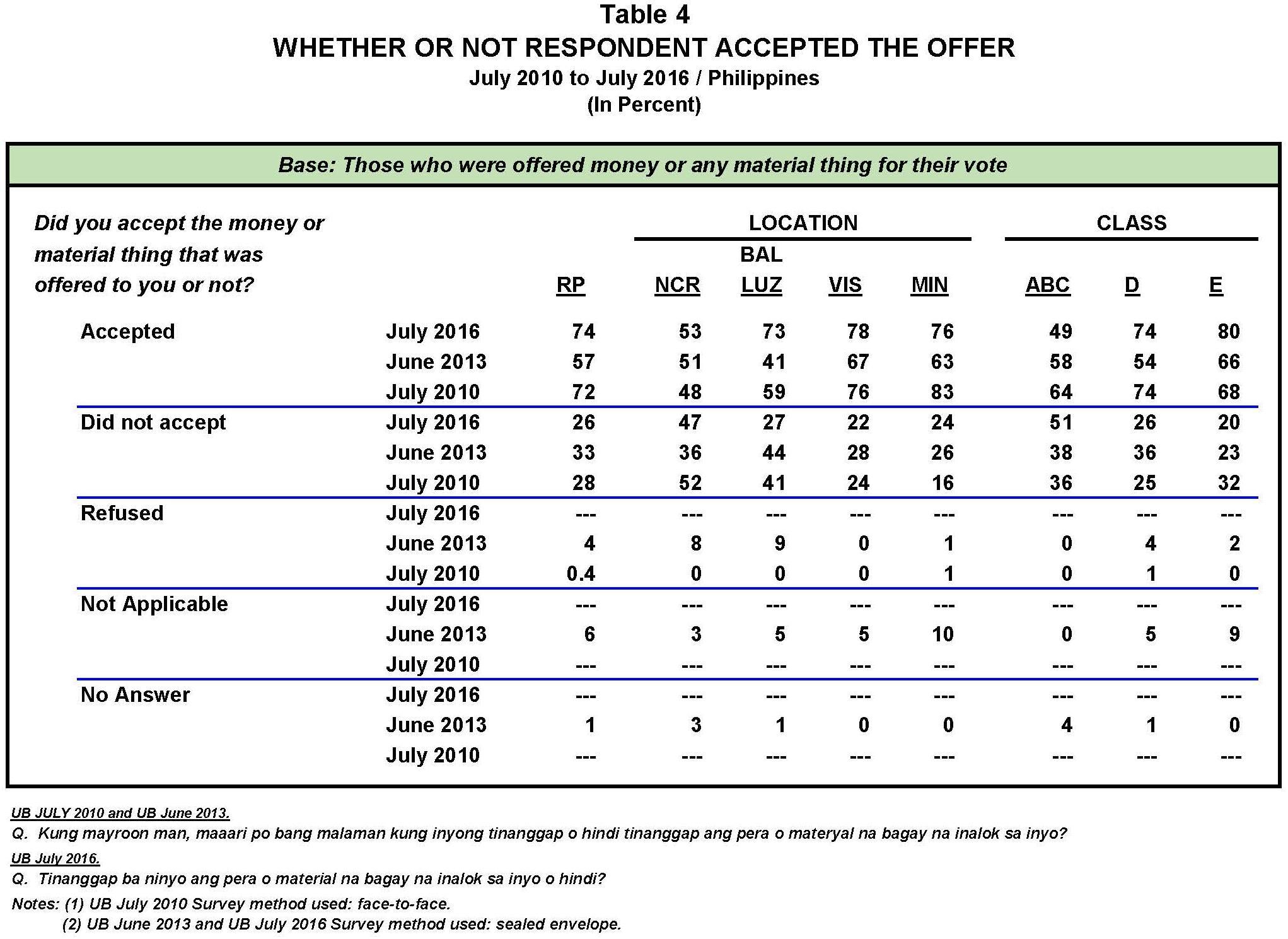 Most of those who received money or any material thing in exchange for their vote in the May 2016 elections used it to purchase food (83%).  Again, majority figures are recorded in every geographic area (69% to 86%) and each socio-economic class (68% to 89%). Meanwhile, about the same percentages report using the money they received to pay their utility bills (17%) or tuition and other school-related expenses (13%). Fewer of those who admit selling their votes in May 2016 saved or kept the money given to them (9%), used it to buy alcohol products (6%) or cellphone card (4%), or paid their rent or mortgage with it (3%). A host of other reasons are cited by 13% of those who were given money or any material thing during the May 2016 elections. (Please refer to Table 5.) 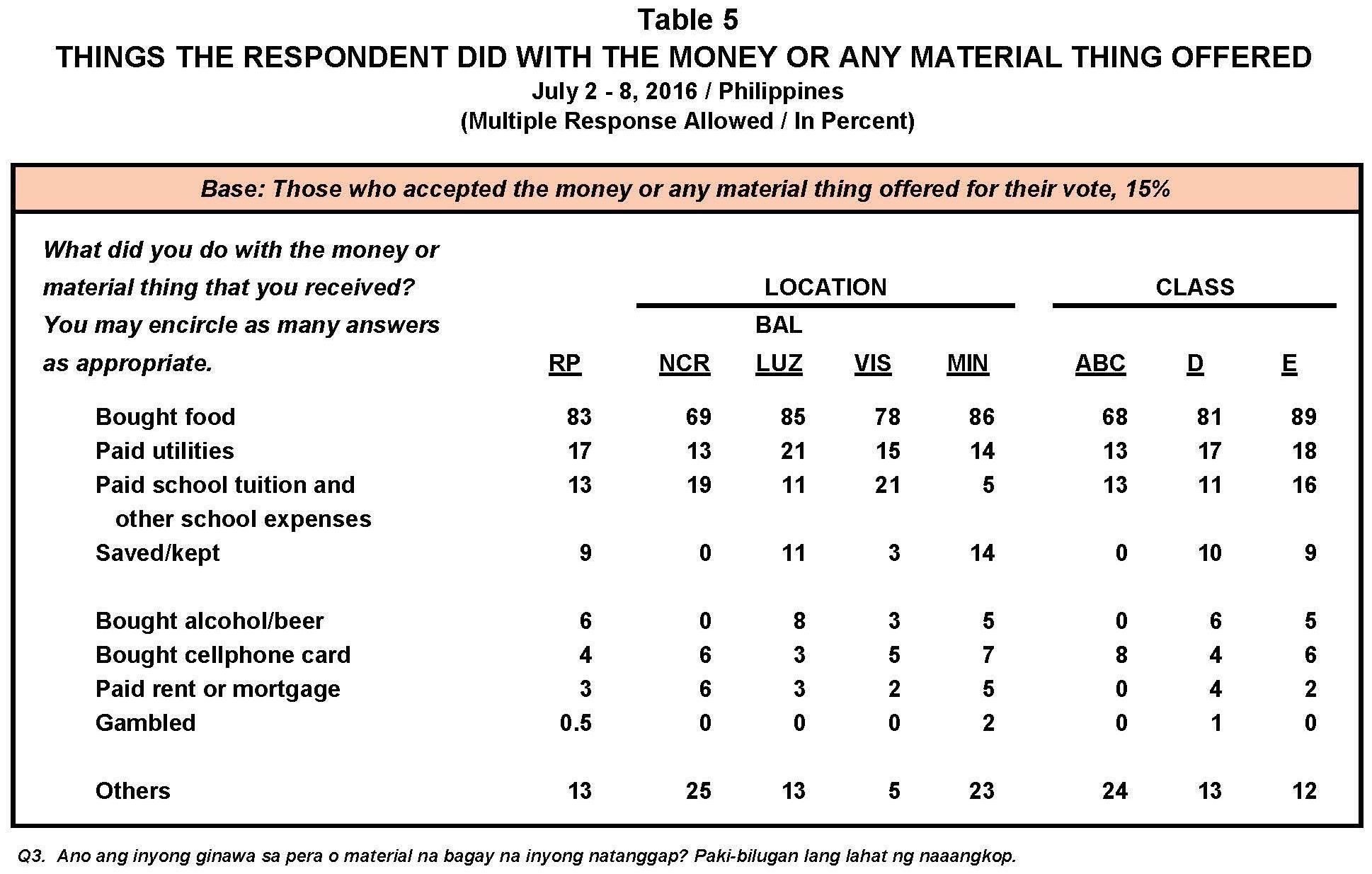 A sizeable plurality of those who received money or any material thing in May 2016 did not want to turn down a free gift and this is why they decided to accept the offer of money (36%). This is the top reason in Class E (45%). Meanwhile, exactly or about the same percentages of Filipinos who accepted the offer of money in exchange for their vote admit needing the money or material thing offered to them (28%), say they would have voted for the candidate with or without the offer of money (28%) or did not want to embarrass the person who made the offer to them (26%). Less often cited reasons for accepting the offer of money are one’s desire to get something from those who are richer or more powerful than him/her (10%) or one’s belief that candidates are obligated to give money or material things to their supporters (6%). Other reasons are cited by 9% of those who accepted the money offered to them in exchange for their vote while 4% gave no response. (Please refer to Table 6.) 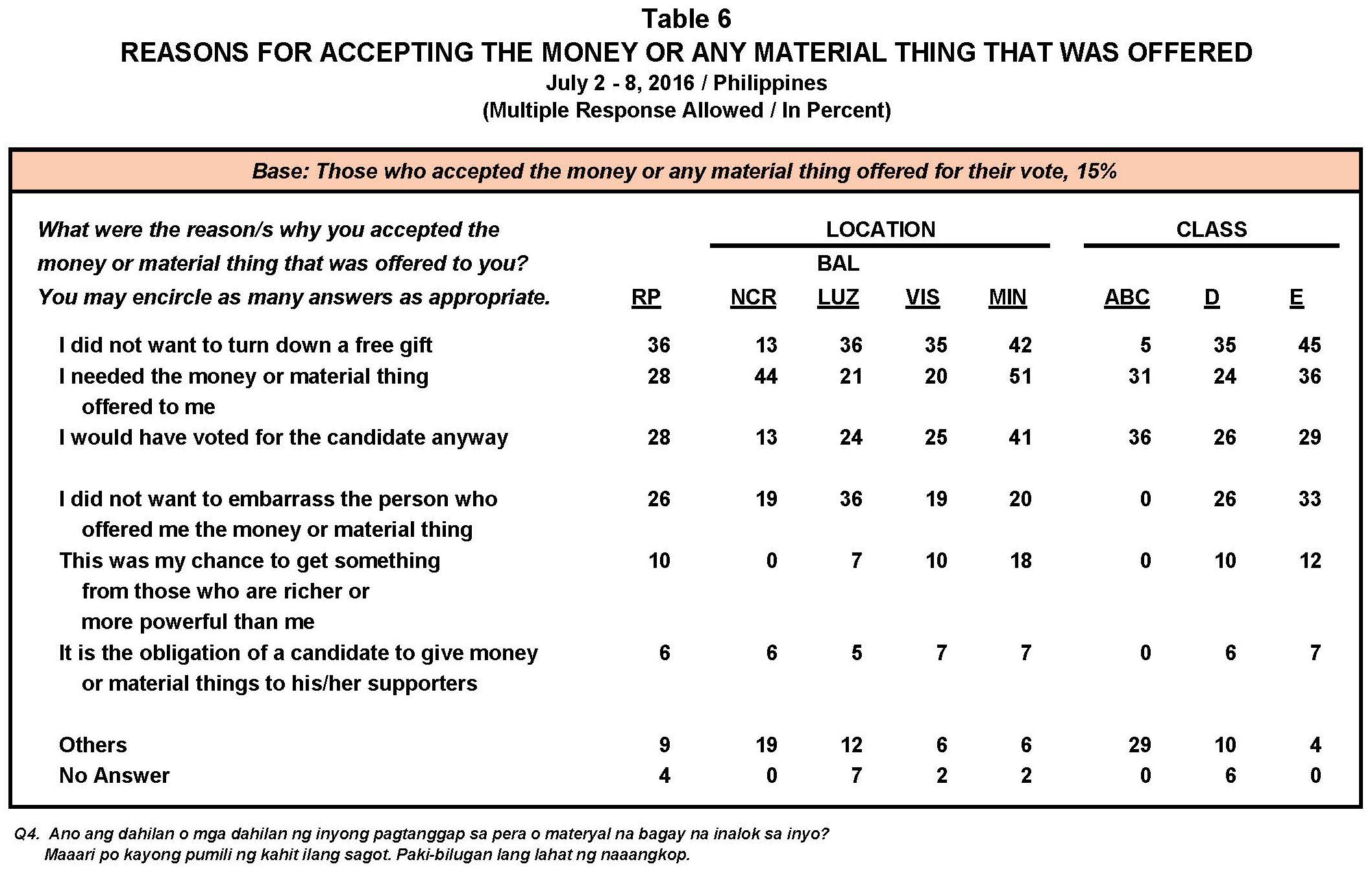 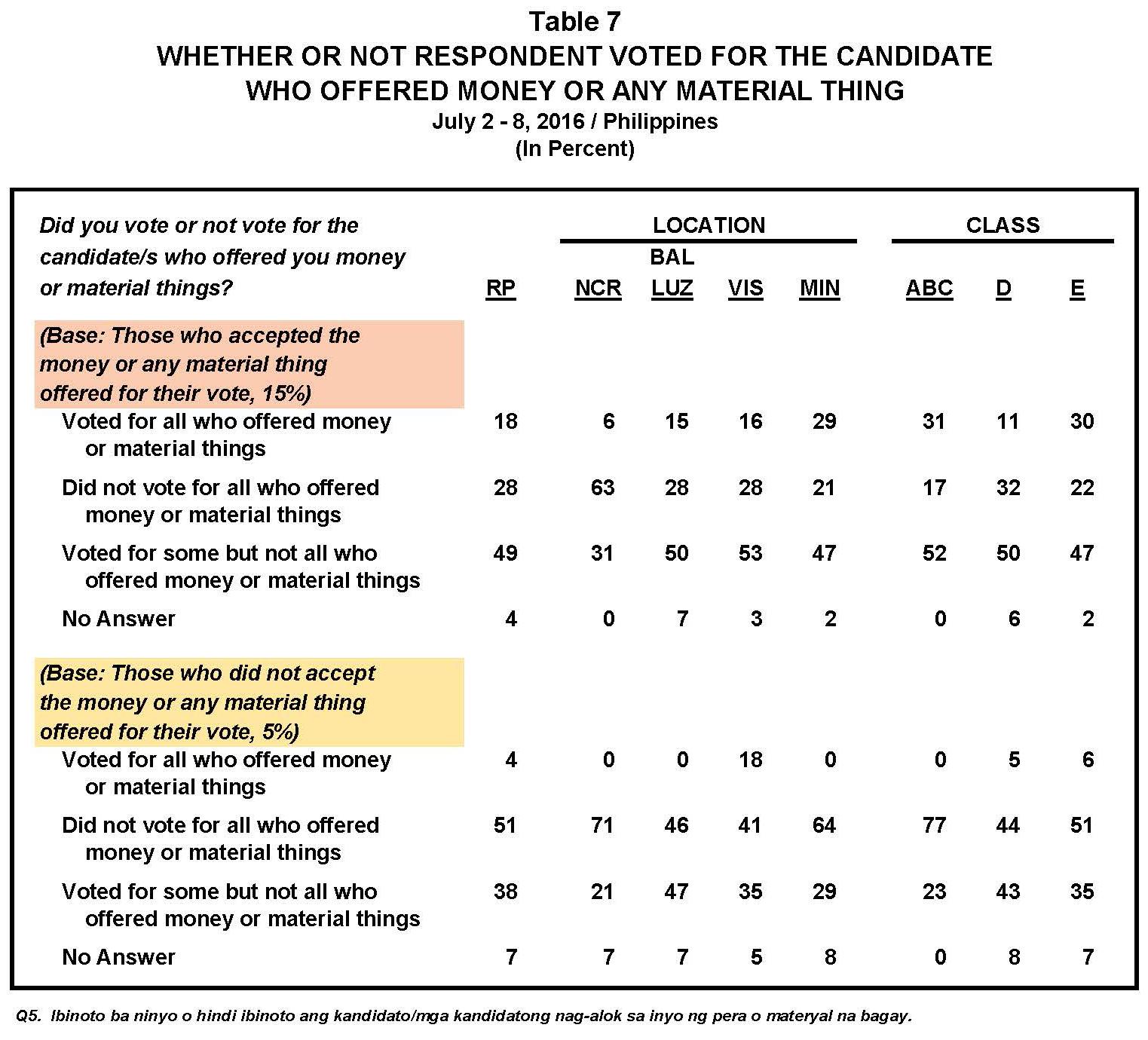