January 2019 Nationwide Survey on the May 2019 Senatorial Elections 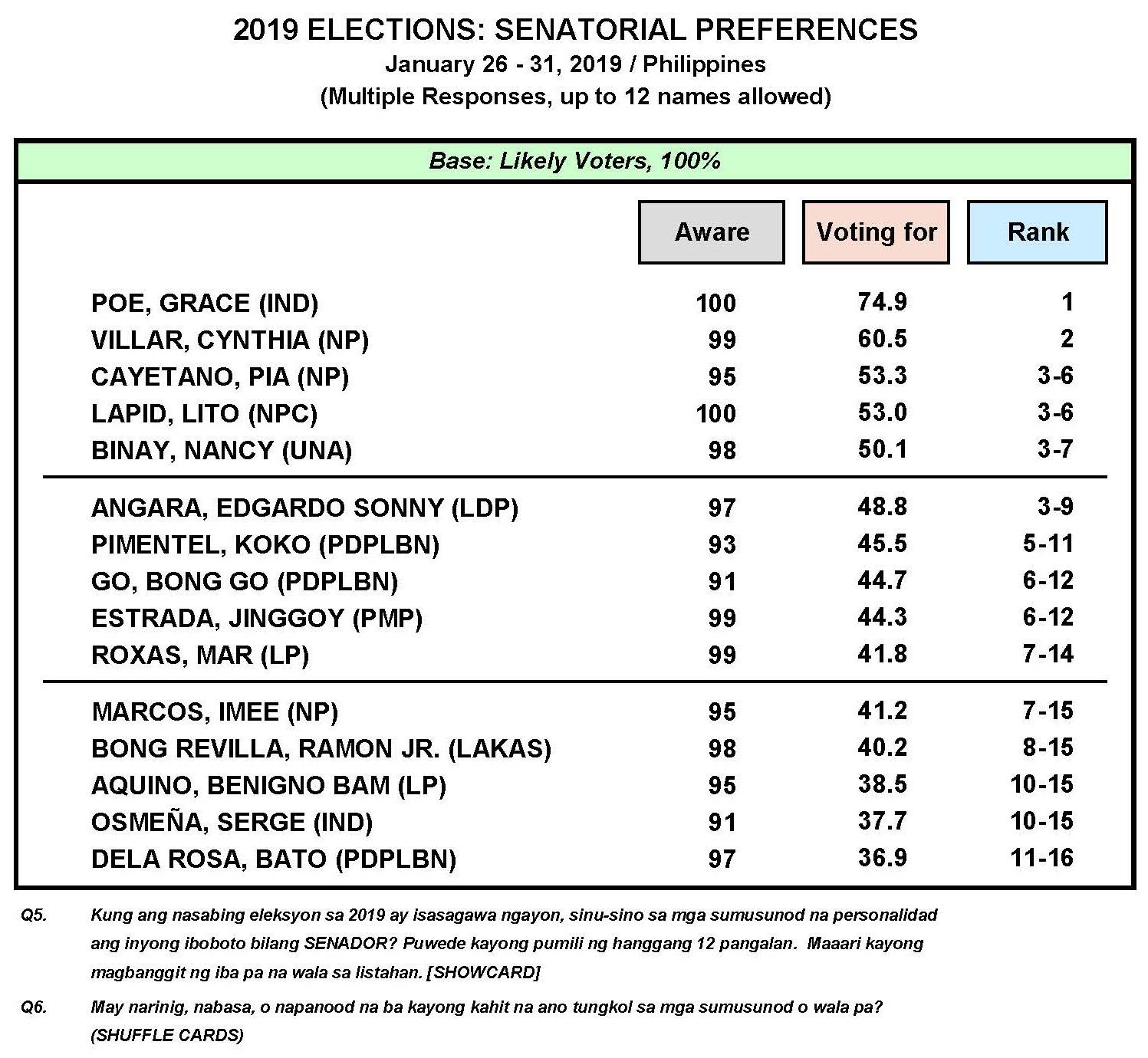 Pulse Asia Research, Inc. is pleased to share with you some findings on the May 2019 Senatorial Elections January 2019 Pulso ng Bayan Pre-Electoral national survey. We request you to assist us in informing the public by disseminating this information.

The survey fieldwork was conducted from January 26 – 31, 2019 using face-to-face interviews. In the weeks leading up to the fieldwork for this survey and during the actual conduct of the interviews, the following local and international developments dominated the headlines:

In the weeks immediately prior to and during the conduct of interviews for this survey, the following developments dominated the news headlines:

1. The bombing of the Roman Catholic Cathedral of Our Lady of Mount Carmel in Jolo, Sulu on 27 January 2019 that resulted in the death of 20 individuals and injuries to 102 others; the Islamic State (IS) claimed responsibility for the attack but the police and military said they were still verifying this claim; President Rodrigo R. Duterte ordered an all-out war against terror groups during his visit to the site of the bombing while Pope Francis and several foreign leaders condemned the bombing as a terrorist attack and offered condolences to those affected;

2. The grenade blast inside a mosque in Zamboanga City on 30 January 2019 that killed two (2) preachers and injured four (4) others; following the bombing, the police in Zamboanga City went on full alert status with checkpoints set up in several areas across the city;

3. The killing of a consultant of the National Democratic Front (NDF) by an unidentified gunman on 30 January 2019 in Nueva Ecija while he was inside a passenger bus; the Philippine National Police (PNP) has created a task group to investigate the killing and go after the perpetrator;

4. The shooting of a barangay chairperson in Quezon City and her driver also on 30 January 2019 in what is seen as a politically motivated act since the victim is seeking a seat in the Lower House in the coming midterm elections;

5. The arrest of Daraga Mayor Carlwyn Baldo on 22 January 2019 for illegal possession of firearms and explosives; the latter was earlier charged with murder in connection with the killing of Ako Bicol Party List Representative Rodel Batocabe on 22 December 2018 after he was tagged as the mastermind behind the incident;

6. The conduct of the first plebiscite on the Bangsamoro Organic Law (BOL) on 21 January 2019, with voters in the provinces belonging to the Autonomous Region in Muslim Mindanao (ARMM), Cotabato City, and Basilan province (with the exception of Isabela City) voting in favor of the abolition of the ARMM and the creation of the Bangsamoro Autonomous Region in Muslim Mindanao (BARMM);

7. The damage caused by Tropical Depression Usman which made landfall on 29 December 2018 in Borongan, Eastern Samar with the National Disaster Risk Reduction and Management Council (NDRRMC) putting the death toll at 126 persons; in addition, the NDRRMC reported 75 injured and 26 missing individuals as well as damage to agriculture and infrastructure at P 758.6 M and P 2.07 B, respectively;

8. The approval by the House of Representatives through a 146-34 vote of a bill seeking to lower to 12 years old, from the current 15 years old, the minimum age of criminal liability for children in conflict with the law;

9. The continuing deliberations of the Bicameral Conference Committee concerning the 2019 General Appropriations Act (GAA) that Congress failed to pass last year; Senator Panfilo Lacson alleged that some of his colleagues have introduced insertions to the proposed budget of the Department of Public Works and Highways (DPWH) that may be considered pork as defined by the Supreme Court in its ruling on the Priority Development Assistance Fund (PDAF);

10. The filing of criminal and administrative charges against former Bureau of Customs (BOC) Commissioner Isidro Lapeña and 50 other individuals arising from two (2) cases of shabu smuggling that went undetected by the agency in 2018; despite the charges, Malacañang said President Duterte continues to trust the former BOC Commissioner;

11. The President’s new series of tirades against the Catholic church and its leaders wherein he called them “sons of bitches”, alleged that most bishops are gay, and urged “tambays” to rob and kill their bishops; in a pastoral letter issued on 28 January 2019, the Catholic Bishops’ Conference of the Philippines (CBCP) apologized to its followers for its “lengthy silence over disturbing issues” such as the President’s anti-illegal drugs campaign and his attacks on the church and its doctrines as its members needed time to deliberate to find a common stand on these matters;

12. The ban on Filipino workers seeking non-agricultural and seasonal agricultural work in the United States (US) under the H-2A and H-2B visa programs in order to reduce cases of overstaying workers and human trafficking;

13. The confirmation made by the PNP that it has issued a memorandum calling for the conduct of an inventory of all teachers in public and private schools who belong to the Alliance of Concerned Teachers (ACT), an organization critical of the Duterte administration; the PNP sacked the intelligence officers who reportedly leaked the memo;

14. The commemoration of the 4th anniversary of the Mamasapano massacre, with families of the so-called SAF 44 continuing their cry for justice and Malacañang calling on the Ombudsman to immediately resolve the case against those behind the ill-fated operation that led to the death of 44 members of the Philippine National Police’s Special Action Forces (SAF) on 25 January 2015;

15. The launching of an interagency clean-up campaign of the Manila Bay on 27 January 2019 that saw several Cabinet secretaries and thousands of government employees and private volunteers march from Quirino Grandstand to the Baywalk area to kick off the clean-up drive; similar activities were held in Navotas, Las Piñas, Cavite, and Bulacan;

16. The release of data by the Philippine Statistics Authority (PSA) showing a decline in inflation from 6% in November 2018 to 5.1% in December 2018 due to a slowdown in the rise in food and transport prices; and

17. In international developments: (a) the end of the partial shutdown of US federal government offices following a three-week spending deal passed by Congress and signed by President Donald Trump that allowed government operations to resume even without the $ 5.7B funding for a border wall demanded by the latter from Congress and (b) the power struggle in Venezuela between President Nicolas Maduro and President of the National Assembly Juan Guaido, with the latter declaring himself as the country’s acting president amidst allegations of anomalies in the May 2018 elections during which President Maduro was elected.

Based on a multistage probability sample of 1,800 likely voters 18 years old and above, Pulse Asia’s nationwide survey has a + 2.3% error margin at the 95% confidence level. Subnational estimates for the geographic areas covered in the survey have the following error margins at 95% confidence level: +6.5% for Metro Manila, +3.5% for the rest of Luzon, +5.3% for Visayas and +4.7% for Mindanao. Those interested in further technical details may refer to our website (www.pulseasia.ph)

Pulse Asia Research’s pool of academic fellows takes full responsibility for the design and conduct of the survey, as well as for analyses it makes based on the survey data. In keeping with our academic nature, no religious, political, economic, or partisan group influenced any of these processes. Pulse Asia Research undertakes Pulso ng Bayan pre-election surveys on its own without any party singularly commissioning the research effort.

Senator Grace Poe retains her lead in the senatorial race (74.9%); less than half of Filipino registered voters (46%) have a complete senatorial slate for the midterm elections

Among the 66 senatorial candidates[1] seeking a seat in the Senate during the May 2019 elections, 15 would have a statistical chance of winning if the elections were held during the survey period. Practically all of the probable winners have at one time or another been part of Congress. As of January 2019, Senator Grace Poe continues to lead with an overall voter preference of 74.9% for a statistical ranking of solo 1st place. In 2nd place is Senator Cynthia Villar (60.5%) while Taguig City Representative Pia Cayetano (53.3%) and former Senator Lito Lapid (53.0%) share 3rd to 6th places. Senators Ma. Lourdes Nancy Binay (50.1%) and Juan Edgardo Angara (48.8%), both re-electionists, are ranked 3rd to 7th and 3rd to 9th places, respectively. (Please refer to Table 1.) 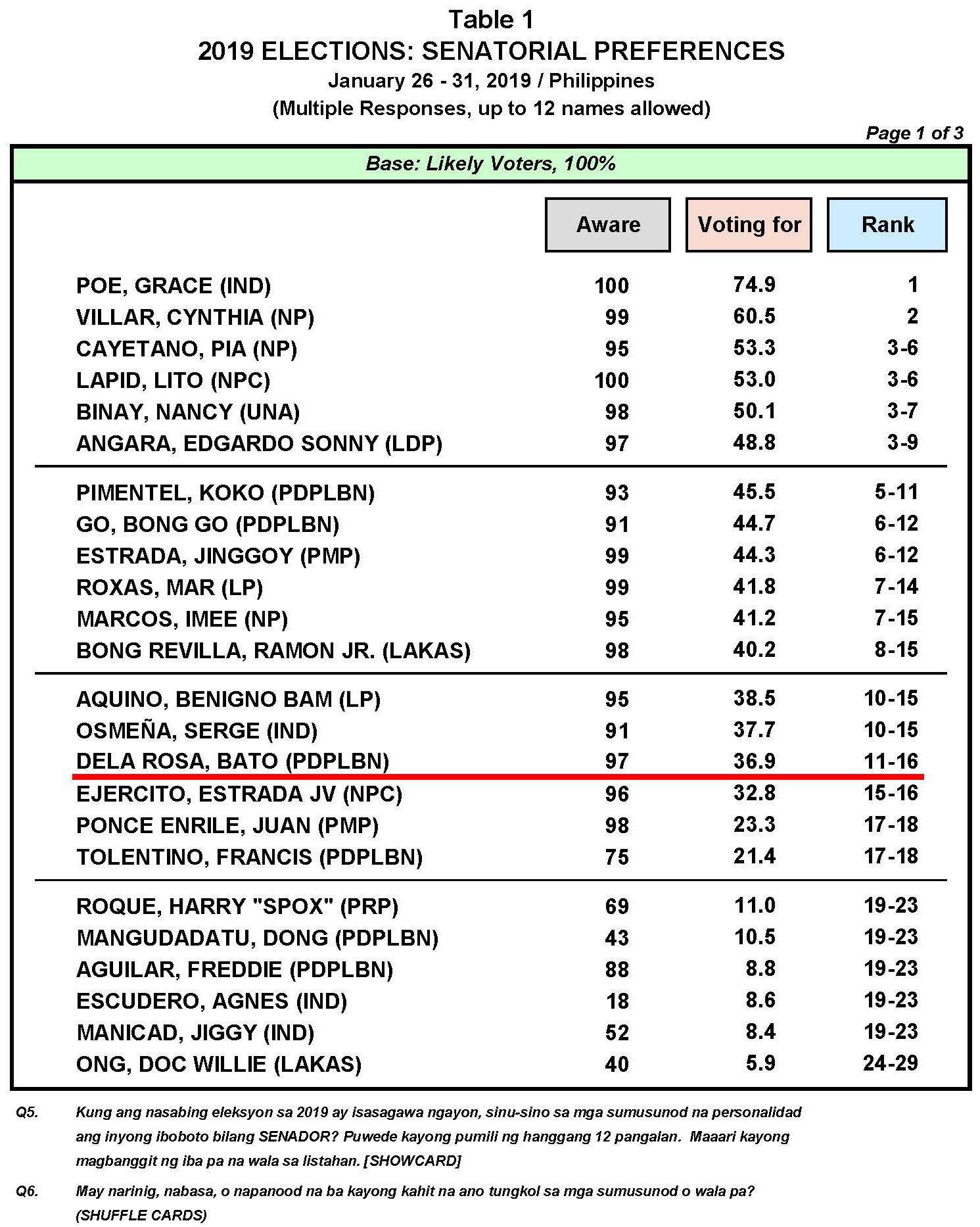 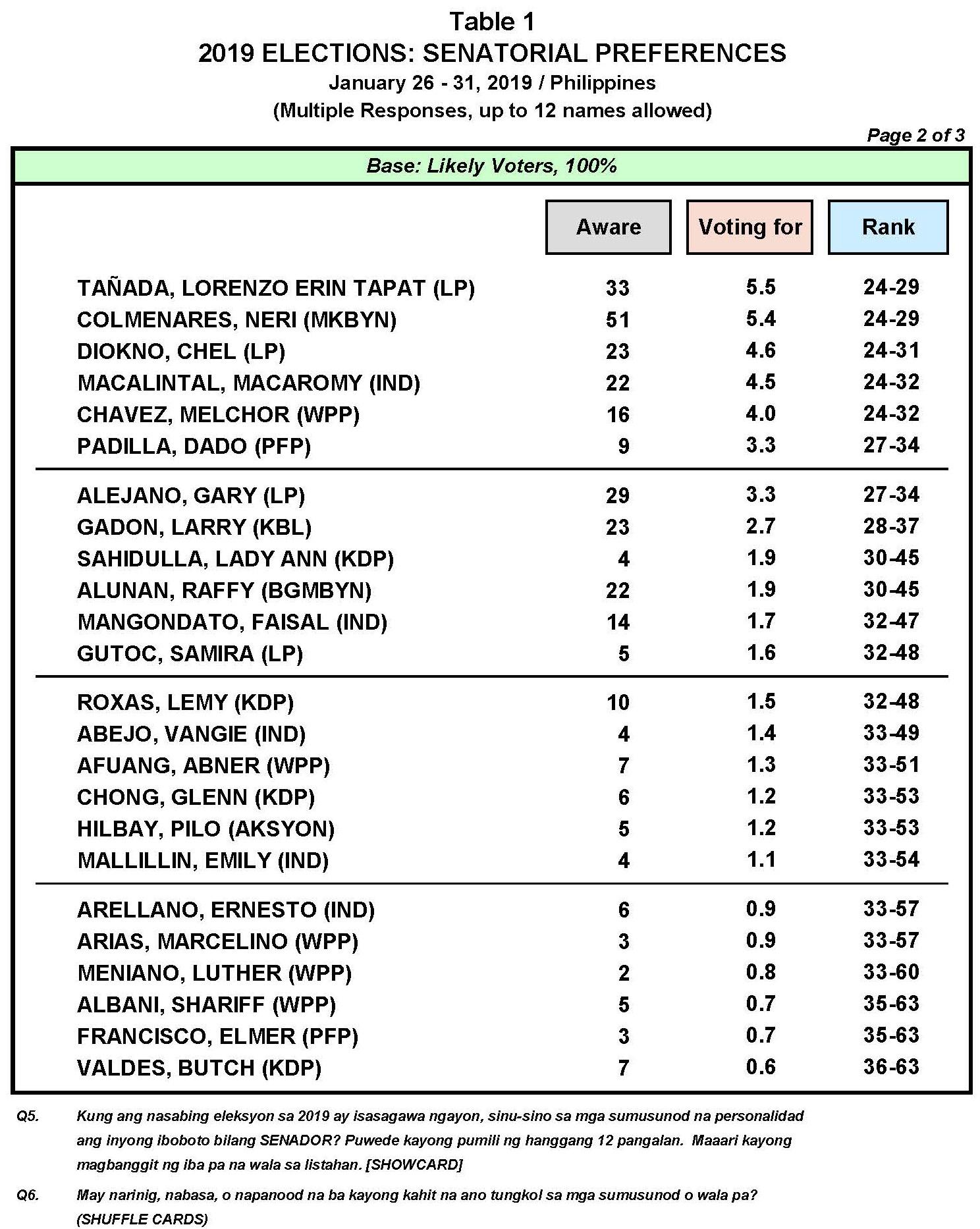 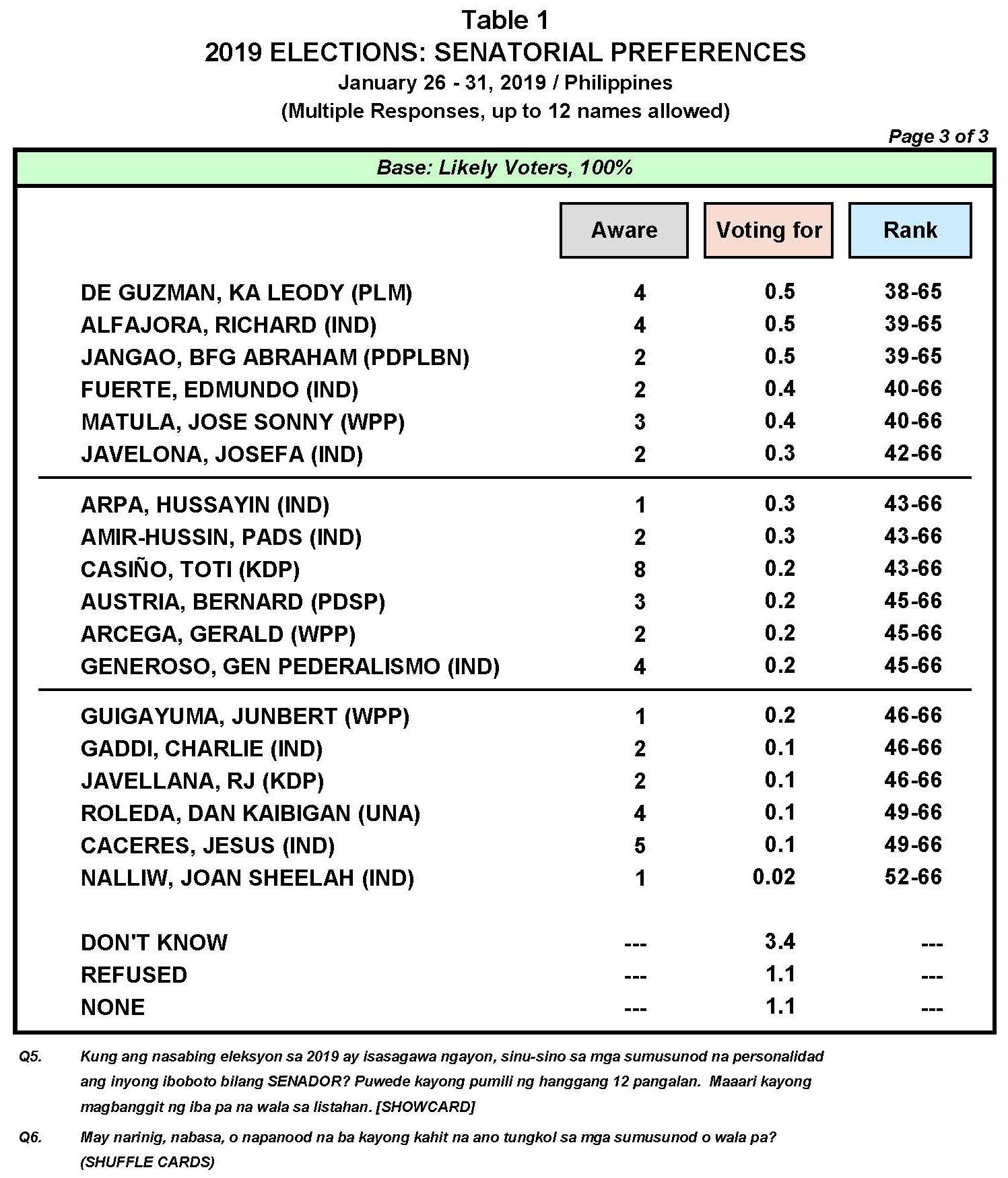 In January 2019, Filipino registered voters are naming a mean of 9 and a median of 11 of their preferred senatorial candidates (i.e., out of a maximum of 12) for the coming elections. Mean and median figures range from 8 to 10 and 9 to 12 across geographic areas, respectively, and from 8 to 9 and 10 to 11 across socio-economic classes, respectively. In addition, 46% of registered voters are already voting for 12 senatorial candidates with more than three (3) months to go before the May 2019 polls. Across geographic areas and socio-economic classes, it is only in Mindanao where a majority of voters (56%) already have a complete slate for the senatorial race. (Please refer to Table 2.) 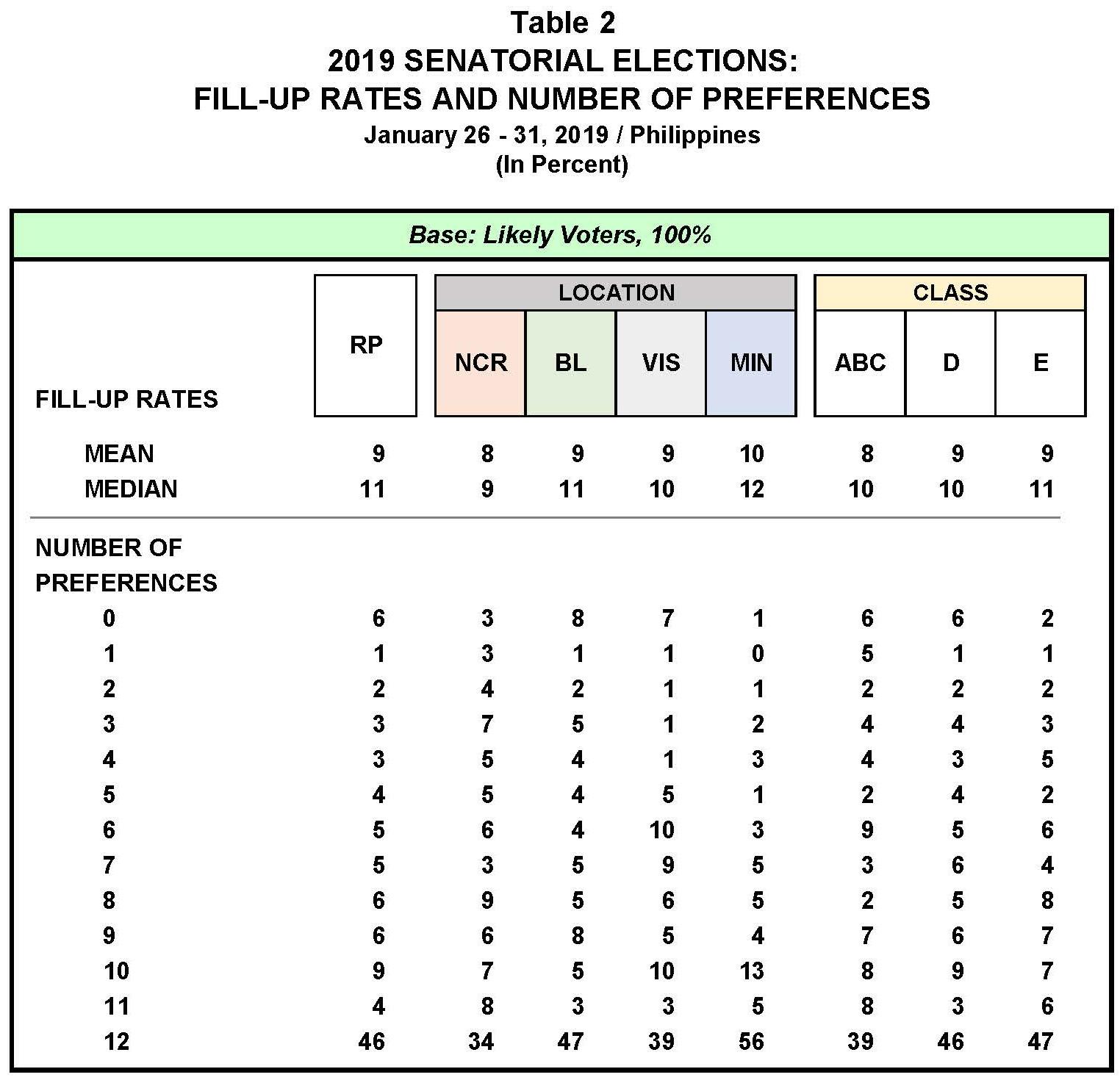 [1] At the time Pulse Asia Research ran this survey, the Commission on Elections (COMELEC) had not yet released the official list of candidates for the May 2019 elections. The said list was released on 01 February 2019, by which time the interviews for this survey were already completed.