February 2019 Nationwide Survey on the May 2019 Senatorial Elections

Pulse Asia Research, Inc. is pleased to share with you some findings on the May 2019 Senatorial Elections February 2019 Pulso ng Bayan Pre-Electoral national survey. We request you to assist us in informing the public by disseminating this information.

The survey fieldwork was conducted from February 24 – 28, 2019 using face-to-face interviews. In the weeks leading up to the fieldwork for this survey and during the actual conduct of the interviews, the following local and international developments dominated the headlines:

The following are some of the key developments that preoccupied Filipinos immediately prior to and during the conduct of the interviews for this survey:

1. The start of the campaign season for candidates for senator and party list representative on 12 February 2019, with both Malacañang and the Commission on Elections (COMELEC) calling on candidates to abide by election laws; the Hugpong ng Pagbabago (HNP) kicked off its campaign in San Fernando, Pampanga while the Otso Diretso candidates began its campaign in Caloocan City; for his part, President Rodrigo R. Duterte endorsed 11 candidates during a campaign rally in San Jose del Monte City, Bulacan on 14 February 2019; as the campaign season began, the Philippine National Police (PNP) reported that the number of election areas of “grave concern” has gone up from 19 in January 2019 to 94 in February 2019;

2. The challenge extended by the Otso Diretso senatorial candidates to their opponents from the HNP to a public debate at Plaza Miranda on 25 February 2019, with the latter failing to show up; nonetheless, administration candidate former Bureau of Corrections (BUR) Chairperson Ronald dela Rosa expressed preparedness to debate their opposition counterparts even as he argued that a candidate should not be judged in terms of one’s debating skills but by one’s accomplishments;

3. The drive against unlawful campaign materials in Metro Manila launched by the COMELEC and other government agencies; the COMELEC has already issued warnings against 40 senatorial aspirants who have been reported to have illegal posters and campaign materials; the PNP has also recommended the disqualification of candidates who use sirens, blinkers, and other emergency devices in their campaign activities;

4. The arrest of Rappler Chief Executive Officer (CEO) Maria Ressa on 13 February 2019 arising from cyber libel charges in connection with an article she co-wrote in May 2012 – four (4) months before the law she purportedly violated was eroded; she was released the following day after posting a bail of P 100,000; her arrest was seen by press freedom advocates in the country and the rest of the world as an act of “persecution” on the part of the Duterte administration, of which the Rappler CEO is an outspoken critic;

5. The declaration of an outbreak of measles in Metro Manila, Central Luzon, Calabarzon, Western Visayas, and Central Visayas, with the Department of Health (DOH) reporting a total of 8,443 cases from 01 January to 16 February 2019, an increase of 491% year-on-year; with the number of fatalities at 136 in mid-February 2019, the DOH has embarked on a mass immunization campaign in order to vaccinate about 12 million people against measles by March 2019; the DOH also recommended that declaration of a dengue outbreak in at least nine (9) towns and cities in Central Visayas since the number of dengue cases in these areas has already exceeded the epidemic thresholds;

6. The remarks made by the President that Chinese nationals reportedly working illegally in the country should just be allowed to remain in the Philippines so as not to antagonize the Chinese government as it may retaliate against the deportation of its nationals from the Philippines by ordering the removal of illegal overseas Filipino workers (OFWs) from China; following the backlash against President Duterte’s statement, with some pro-administration lawmakers also criticizing his tolerant stance towards illegal Chinese workers, Malacañang clarified that the President remains committed to the enforcement of immigrant laws against all violators;

7. The signing by President Duterte of different laws that will: (a) lift import restrictions on rice and replace such with a tariff; (b) grant additional leave benefits for working mothers such as a paid maternity leave of 105 days, up from the previous 60 days for normal delivery and 78 days for caesarian delivery; (c) automatically enroll every Filipino in the National Health Insurance Program to be handled by the Philippine Health Insurance Corporation (PhilHealth); (d) create the Department of Housing and Urban Development (DHUD) that will be responsible for the management of housing, human settlement, and urban development; and (e) require media outlets to extend discounts to political parties and candidates on their ad placements during the campaign season

8. The ratification by the Senate and the House of Representatives of the P 3.75 T national budget for 2019 on 08 February 2019; despite this, the controversy over allegations of pork insertions in the budget amounting to P 98.7 B continues, with Camarines Sur Representative Rolando Andaya, Jr. claiming that congressmen inserted pork barrel funds of P 23.9 B, senators have P 49.6 B, and the Bicameral Committee added P 25.2 B; Senator Panfilo Lacson has earlier asked President Duterte to veto the pork insertions in the national budget;

10. The recommendation made by the House Committees on Good Government and Health, through a vote of 14-4, to file criminal and administrative charges against former President Benigno S. Aquino III, former DOH Secretary Janette Garin, former Department of Budget and Management (DBM) Secretary Florencio Abad, and other personalities in connection with the previous administration’s P 35 B vaccination program involving the use of the Dengvaxia vaccine;

11. The claims of former Bayan Muna Party List Representative Neri Colmenares that the P 3.2 B loan from China to be used for the Chico River Pump Irrigation Project is onerous and highly disadvantageous to the Philippines not only due to its high interest rates but also because China will not be made liable to pay taxes and charges and a Chinese company has been designated as the project’s contractor; the Department of Finance (DOF) countered by pointing out that prior to its approval, the loan agreement was vetted by the Investment Coordination Committee (ICC);

12. The statement of Department of Transportation (DOTr) Secretary Arthur Tugade that he will push for the granting of emergency powers to the President in the next Congress to enable him to address the traffic problem along EDSA; President Duterte admitted that he has failed to deliver on his promise to improve the traffic situation along EDSA because his critics in Congress blocked the proposal to grant emergency powers to him due to fears that its exercise would be prone to corruption;

13. The commemoration of the 33rd anniversary of the EDSA People Power Revolution, with President Duterte, who did not attend the scheduled activities at EDSA, urging the people, generally the younger generation, to “value the freedom and liberty” won by the Filipino people in February 1986;

14. The reported death threats from unknown persons against priests, including Catholic Bishops’ Conference of the Philippines (CBCP) Vice-President Pablo Virgilio David, a known critic of President Duterte; the President has, in several instances, attacked Catholic priests, even going as far as saying they should be robbed and killed; but on 25 February 2019, President Duterte reversed himself as he called on the public to spare priests from harm because they are not involved in politics;

15. The diplomatic stir resulting from the remarks made by Department of Foreign Affairs (DFA) Secretary Teodoro Locsin, Jr. defending President Duterte’s previous statement comparing his “war on drugs” to the killing of Jews by Adolf Hitler during World War II; the Philippines’ chargé d’affaires in Germany was summoned to the German Federal Foreign Office over the latter’s remarks;

16. The call made by National Youth Commission (NYC) Chairperson Ronald Cardema for President Duterte to withdraw the government scholarships of all anti-government scholars, particularly those allied with the Communist Party of the Philippines-New People’s Army-National Democratic Front (CPP-NPA-NDF); both allies and critics of the Duterte administration criticized the proposal, with Malacañang emphasizing that dissent is a means by which people can exercise their freedom of speech, expression, and assembly; and

17. In economic and financial matters, the increase in the prices of gasoline, diesel, and kerosene following Saudi Arabia’s decision to cut exports and further slash oil production as well as the imposition of sanctions on Venezuela and Iran by the United States (US); the higher electric bills to be paid by Manila Electric Co. (Meralco) customers due to a rise in power generation charges; and the return of the local currency to the P51:US$1 level toward the end of February 2019, its strongest performance in nine (9) months.

Based on a multistage probability sample of 1,800 likely voters 18 years old and above, Pulse Asia’s nationwide survey has a +/-2.3% error margin at the 95% confidence level.  Subnational estimates for the geographic areas covered in the survey have the following error margins at 95% confidence level:  +/- 6.8% for Metro Manila, +/-3.5% for the rest of Luzon, +/-5.1% for Visayas and +/-4.8% for Mindanao. Those interested in further technical details may refer to our website (www.pulseasia.ph)

Pulse Asia Research’s pool of academic fellows takes full responsibility for the design and conduct of the survey, as well as for analyses it makes based on the survey data. In keeping with our academic nature, no religious, political, economic, or partisan group influenced any of these processes.  Pulse Asia Research undertakes Pulso ng Bayan pre-election surveys on its own without any party singularly commissioning the research effort.

For any clarification or questions, kindly contact Dr. Ana Maria Tabunda, Research Director of Pulse Asia Research at 09189436816 or Ronald D. Holmes,  Pulse Asia Research President via Viber or Telegram at +639189335497 or at ronald.holmes@gmail.com (via email.).

Senator Grace Poe sustains her lead in the senatorial race; only 37% of Filipinos have a complete senatorial slate for the coming midterm elections

Out of the 62 candidates seeking a senatorial seat in May 2019, 14 have a statistical chance of making it to the winners’ circle if the elections were conducted at the same time as the interviews for this survey. Virtually all of the probable winners are either former or current members of Congress. With a little over two (2) months to go before the elections, Senator Grace Poe remains at the top of the leaderboard with a statistical ranking of solo 1st place based on her overall voter preference of 67.5%. Meanwhile, Senator Cynthia Villar’s reelection bid has the support of 61.0% of registered voters and this translates to a ranking of solo 2nd place. Tied for 3rd to 5th places are former Special Assistant to the President Christopher Go (53.0%) and Senator Juan Edgardo Angara (52.2%). In 3rd to 7th places is former Senator Lito Lapid who would be elected by 49.0% of registered voters if the May 2019 polls coincided with the conducted of the survey interviews. Completing the top half of the list of probable winners are Taguig City Representative Pia Cayetano (47.0%) who occupied 5th to 7th places and former Bureau of Corrections (BuCor) Chief Ronald dela Rosa who finds himself in 5th to 8th places (44.6%). (Please refer to Table 1.)

Virtually the same percentages of Filipino voters are ambivalent about whom to elect as senator (1.1%), refuse to identify their preferred senatorial candidates (1.6%), or do not express support for any of the candidates running for senator (1.0%) in the coming May 2019 elections. 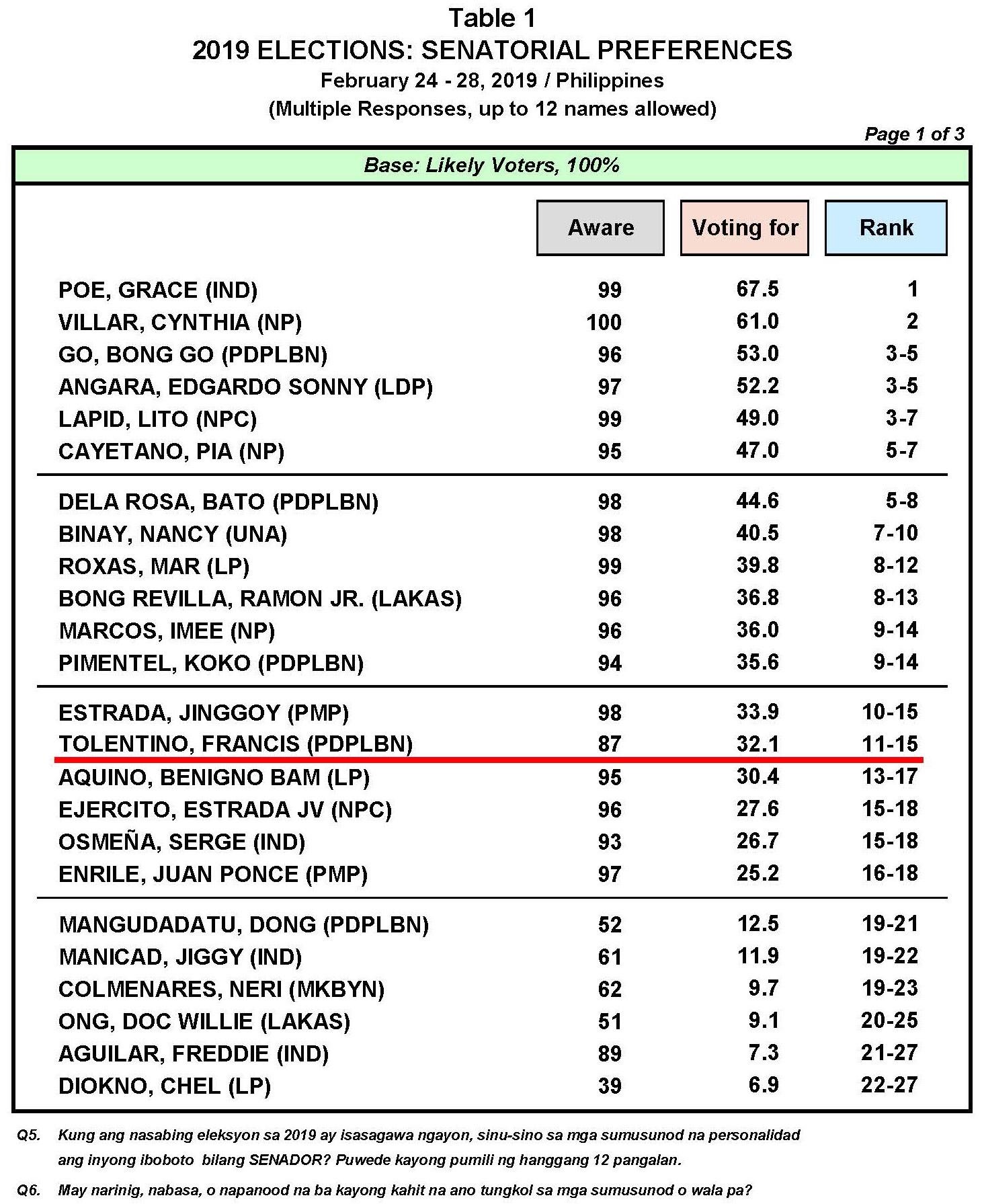 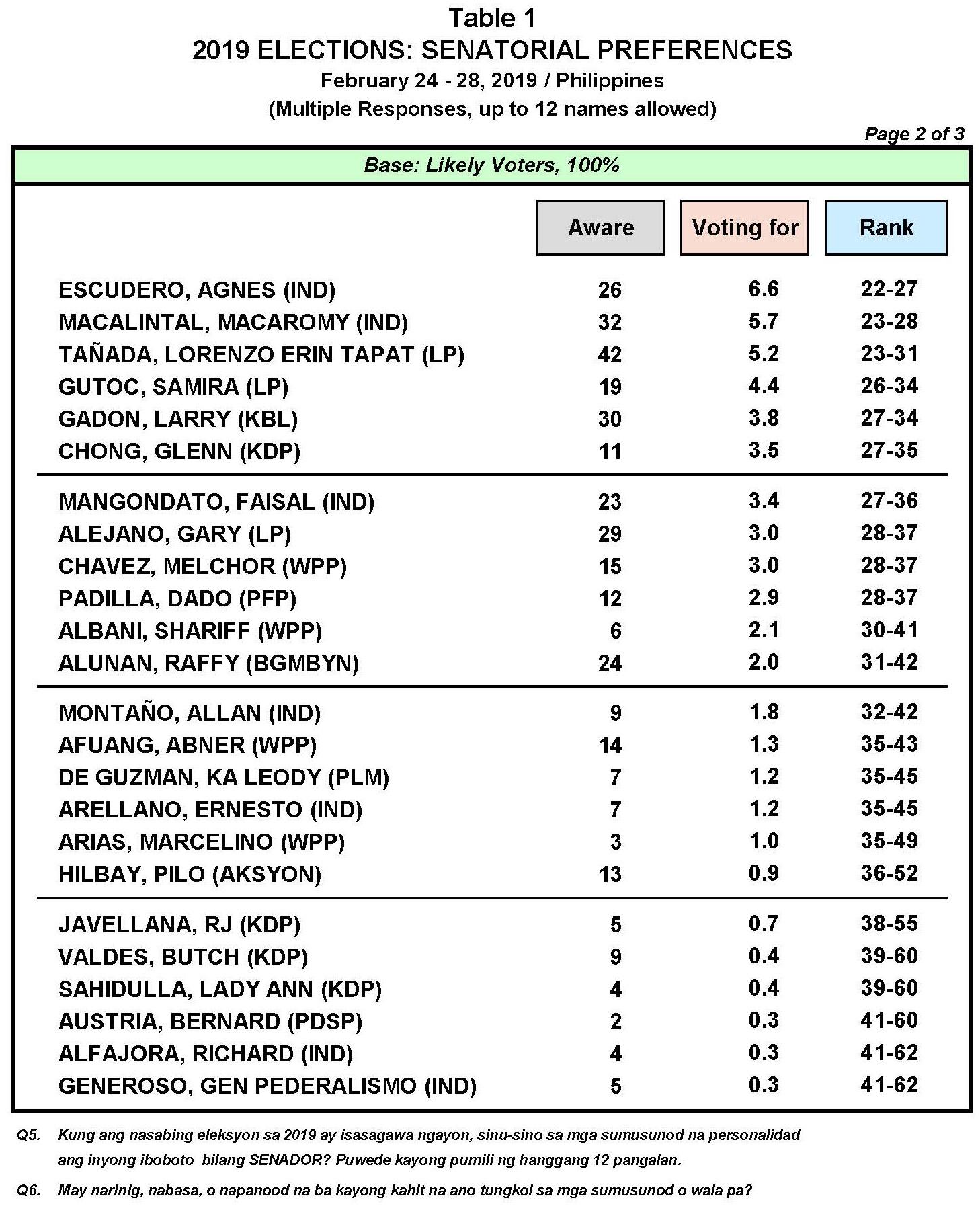 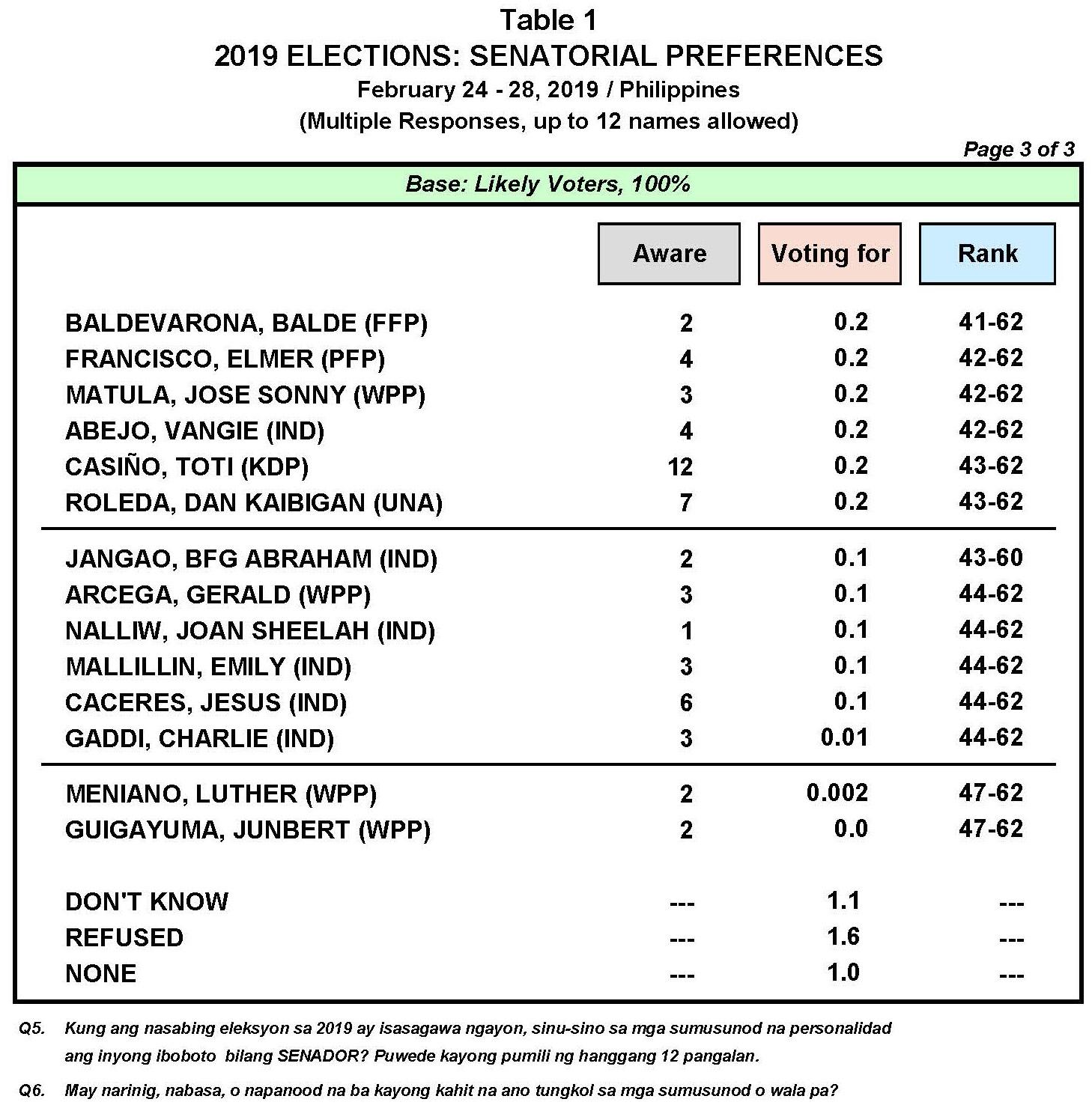 A little over a third of registered voters (37%) support 12 senatorial candidates as of February 2019. Across geographic areas and socio-economic groupings, it is only in Mindanao where most voters already have 12 preferred senatorial candidates. In contrast, only about a quarter of voters in the rest of Luzon (28%), the Visayas (26%), and Class E (27%) have a complete senatorial slate. In addition, Filipino registered voters are identifying a mean of 8 and a median of 9 (out of a maximum of 12) senatorial candidates they are inclined to vote for in the May 2019 polls. In the different geographic areas and socio-economic classes, mean figures vary from 8 to 10 while median figures range from 8 to 12. (Please refer to Table 2.) 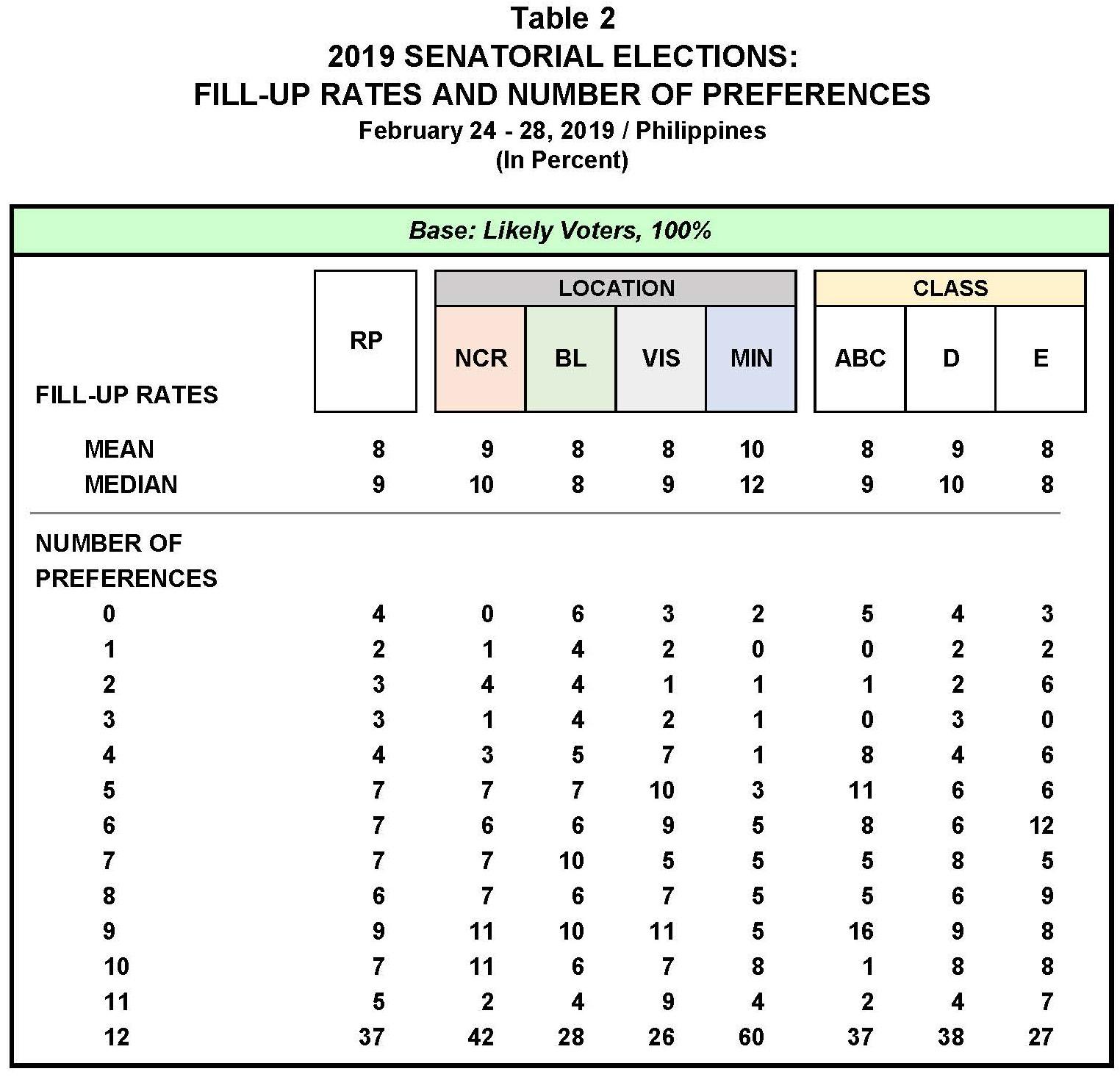