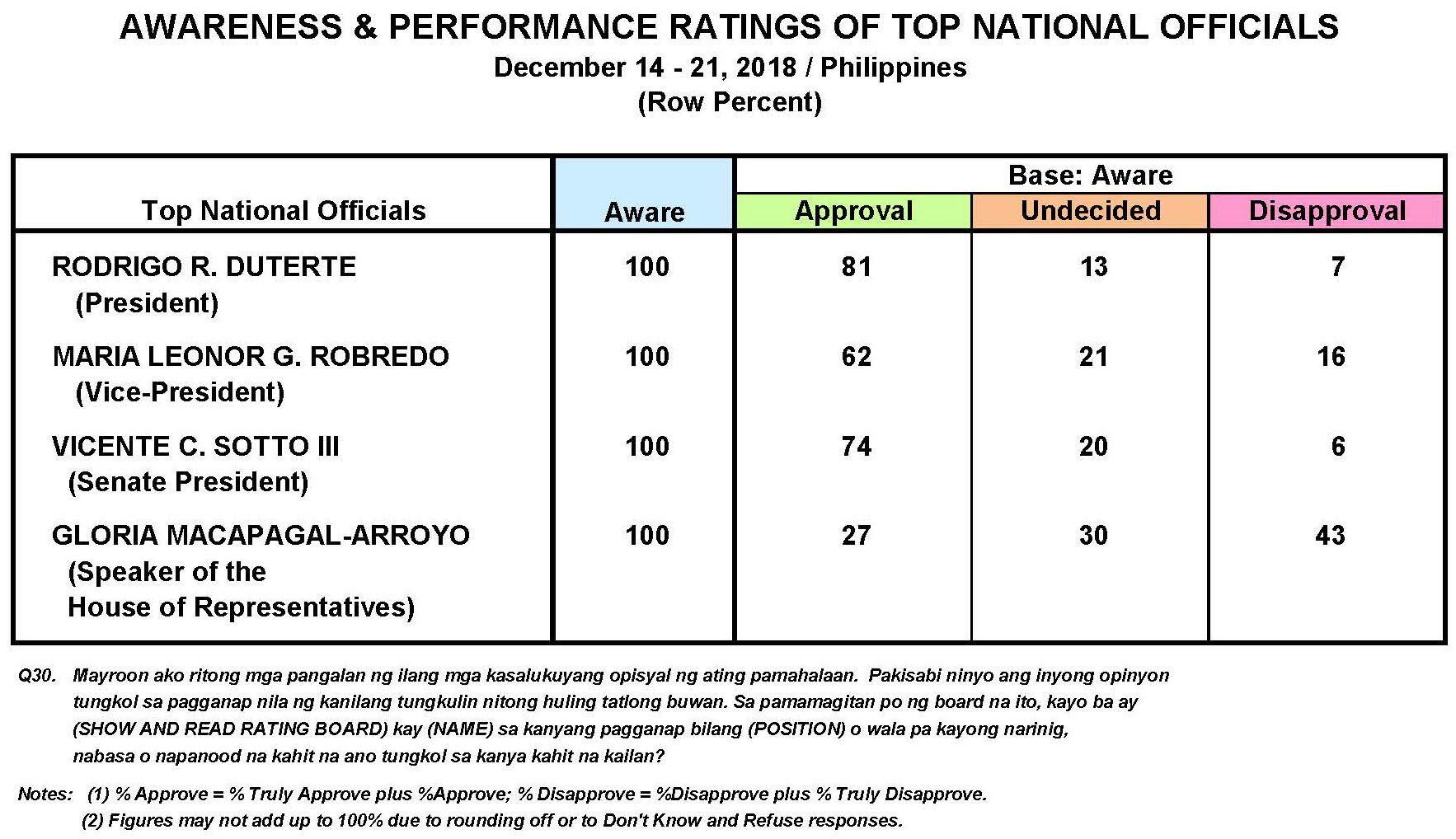 Pulse Asia Research, Inc. is pleased to share with you some findings on the Performance and Trust Ratings of Key Government Officials and Institutions from the December 2018 Ulat ng Bayan national survey. We request you to assist us in informing the public by disseminating this information.

4. The conviction of the three (3) police officers accused of killing Kian delos Santos in August 2017 by the Caloocan City Regional Trial Court (RTC) and the order for them to pay the victim’s family P 345,000 in damages; President Rodrigo R. Duterte said he will not pardon these police officers because he will only defend law enforcers who fulfill their duties according to the law;

8. Senator Panfilo Lacson’s claim that in addition to the P 2.4 B fund insertions in the budget allocated to the district of House Speaker Gloria Macapagal-Arroyo and the P 1.9 B for the district of House Majority Leader Andaya, several districts in Bohol, Surigao, and other areas in the Visayas and Mindanao whose representatives are close to the House Speaker also received huge allocations in the 2019 budget;

17. Other developments during this time include the commemoration of the 155th birth anniversary of Andres Bonifacio in Caloocan City; the President’s move to revive the Reserved Officer Training Corps (ROTC) program to include not only college students but senior high school students as well; the Senate investigation into the influx of undocumented foreign workers, particularly Chinese, and the raids conducted by the National Bureau of Investigation (NBI) which led to the arrest of several Chinese online gambling workers; the turnover of the Balangiga Bells from the United States (US) to the Philippines on 12 December 2018; the issuance of a warrant of arrest against Senator Antonio Trillanes IV in connection with the libel cases filed against him by former Davao City Vice-Mayor Paolo Duterte and Atty. Manases Carpio arising from the lawmaker’s allegation that the latter were involved in the P 6.4 M shabu shipment that slipped past the Bureau of Customs (BOC) in May 2017; the decline in inflation from 6.7% in October 2018 to 6.0% in November 2018 due to decreasing average consumer prices; the P 25 increase in the minimum wage in Metro Manila effective 22 November 2018; the increase in electricity charges of Manila Electric Company (Meralco) in November and December 2018 primarily due to higher power prices for contracted supply and from independent power producers; the inclusion of Rappler Chief Executive Officer (CEO) Maria Ressa as part of “The Guardians”, a group of journalists who have been targeted because of their work, that TIME magazine recognized as its “Person of the Year”; the victory of Ms. Catriona Gray at the Ms. Universe pageant held in Thailand; the start of the Simbang Gabi marked by Cardinal Luis Antonio Tagle’s call for those in power not to use their position to bully others; the bullying videos involving a junior high school student from the Ateneo de Manila University (ADMU) that went viral and which led to calls for an investigation into the matter; and in the international arena, the return of the Democrats to the House of Representatives following the 06 November 2018 midterm elections in the United States (US) and the no-confidence vote that British Prime Minister (PM) Theresa May survived via a 200-117 party-only vote amidst increasing criticism of her Brexit deal.

As in our previous Ulat ng Bayan surveys, this nationwide survey is based on a sample of 1,800 representative adults 18 years old and above. It has a +2.3% error margin at the 95% confidence level. Subnational estimates for the geographic areas covered in the survey have the following error margins at 95% confidence level: +6.5% for Metro Manila

Most Filipinos express appreciation for the performance of President Rodrigo R. Duterte (81%), Vice-President Maria Leonor G. Robredo (62%), and Senate President Vicente C. Sotto III (74%). In contrast, a big plurality of Filipinos (43%) are critical of the work done by House Speaker Gloria Macapagal-Arroyo. Levels of indecision regarding the performance of these national government officials range from 13% for President Duterte to 30% for House Speaker Macapagal-Arroyo. Between September and December 2018, the only notable movement in these figures is the increase in the approval rating of President Duterte (+6 percentage points).[1] (Please refer to Tables 1 and 5.) 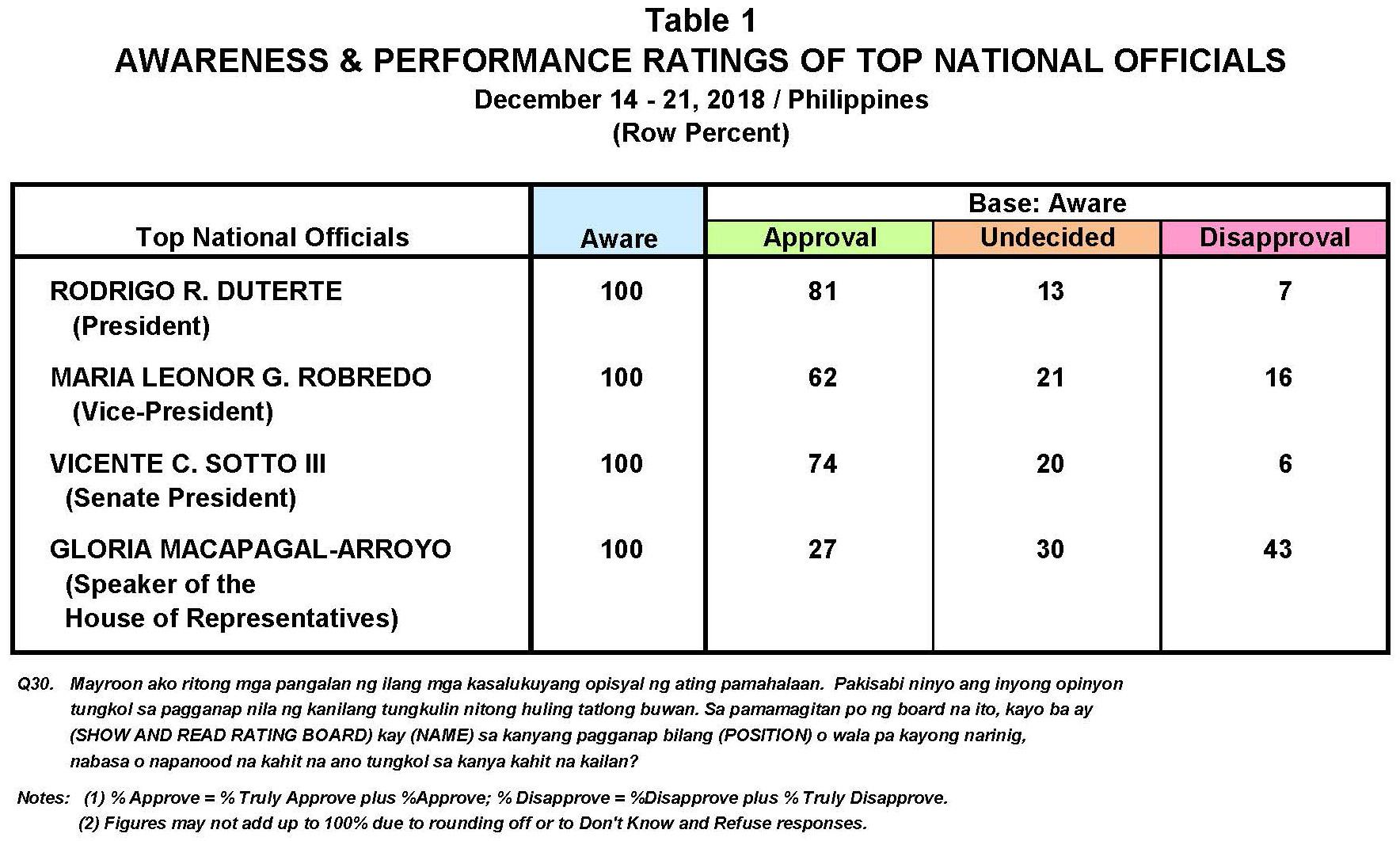 Meanwhile, majority trust scores are also recorded by President Duterte (76%), Vice-President Robredo (56%), and Senate President Sotto (66%). Similarly, distrust is the plurality public sentiment toward House Speaker Macapagal-Arroyo (45%). Ambivalence on the matter of trusting or distrusting these officials is most marked toward the latter (34%) and least pronounced toward President Duterte (17%). These national figures are essentially the same as those recorded by Pulse Asia Research in September 2018. (Please refer to Tables 2 and 6.) 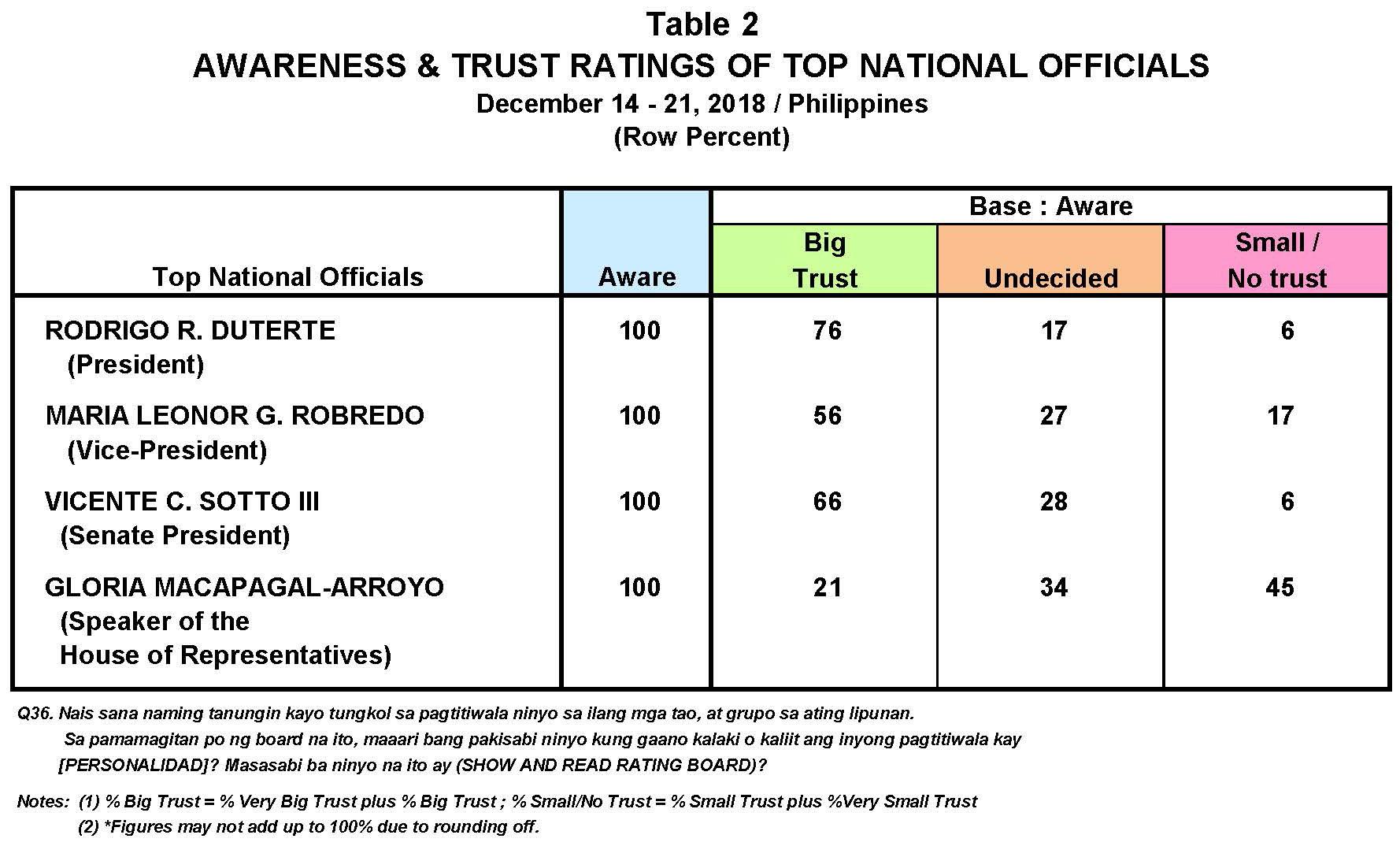 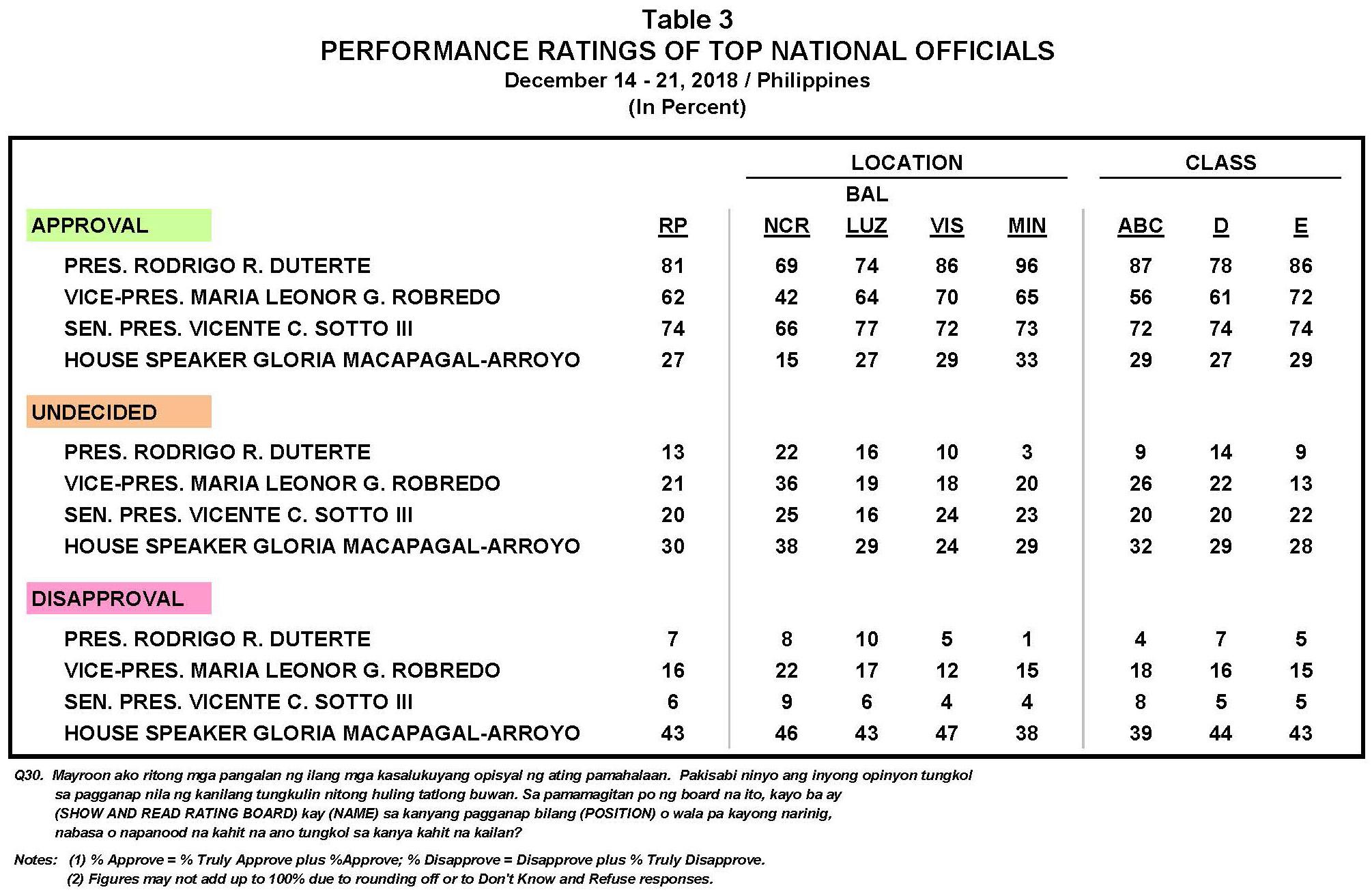 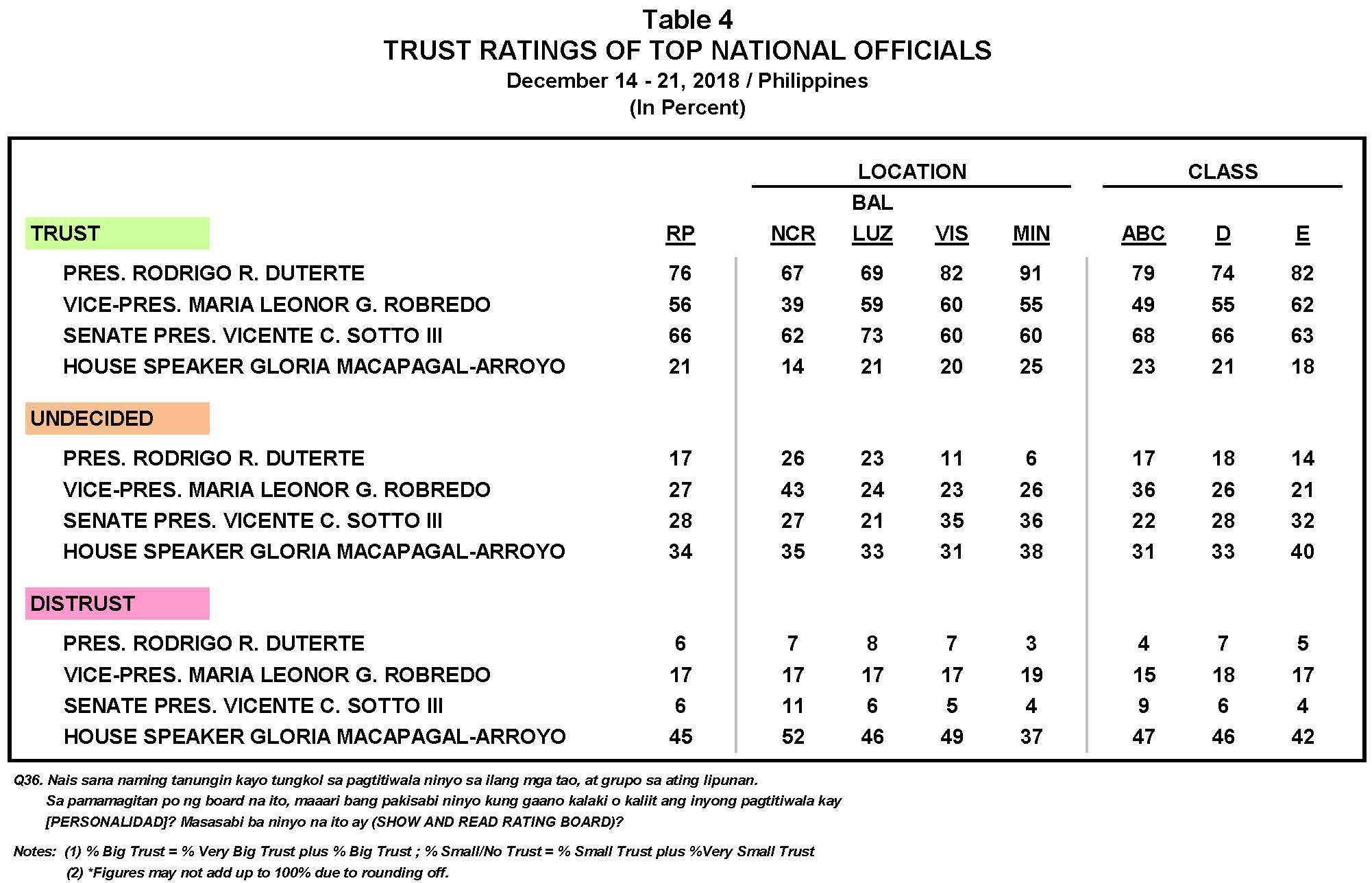 The only majority figure obtained by the House Speaker is her 52% distrust rating in Metro Manila. Big pluralities to near majorities in the rest of Luzon (43% and 46%, respectively), the Visayas (47% and 49%, respectively), and Class D (44% and 46%, respectively) are critical of and distrust House Speaker Macapagal-Arroyo. Around the same percentages either disapprove of or are undecided about the latter’s performance in Metro Manila (46% versus 38%) and Class ABC (39% versus 32%) while she records essentially the same distrust and indecision figures in Mindanao (37% versus 38%), Class ABC (47% versus 31%), and Class E (42% versus 40%). Public assessment of the lawmaker’s performance is split three (3) ways in Mindanao and Class ABC with 29% to 33% being appreciative of what she did in the past quarter, 29% to 32% expressing ambivalence on the matter, and 38% to 39% having a negative opinion about it. 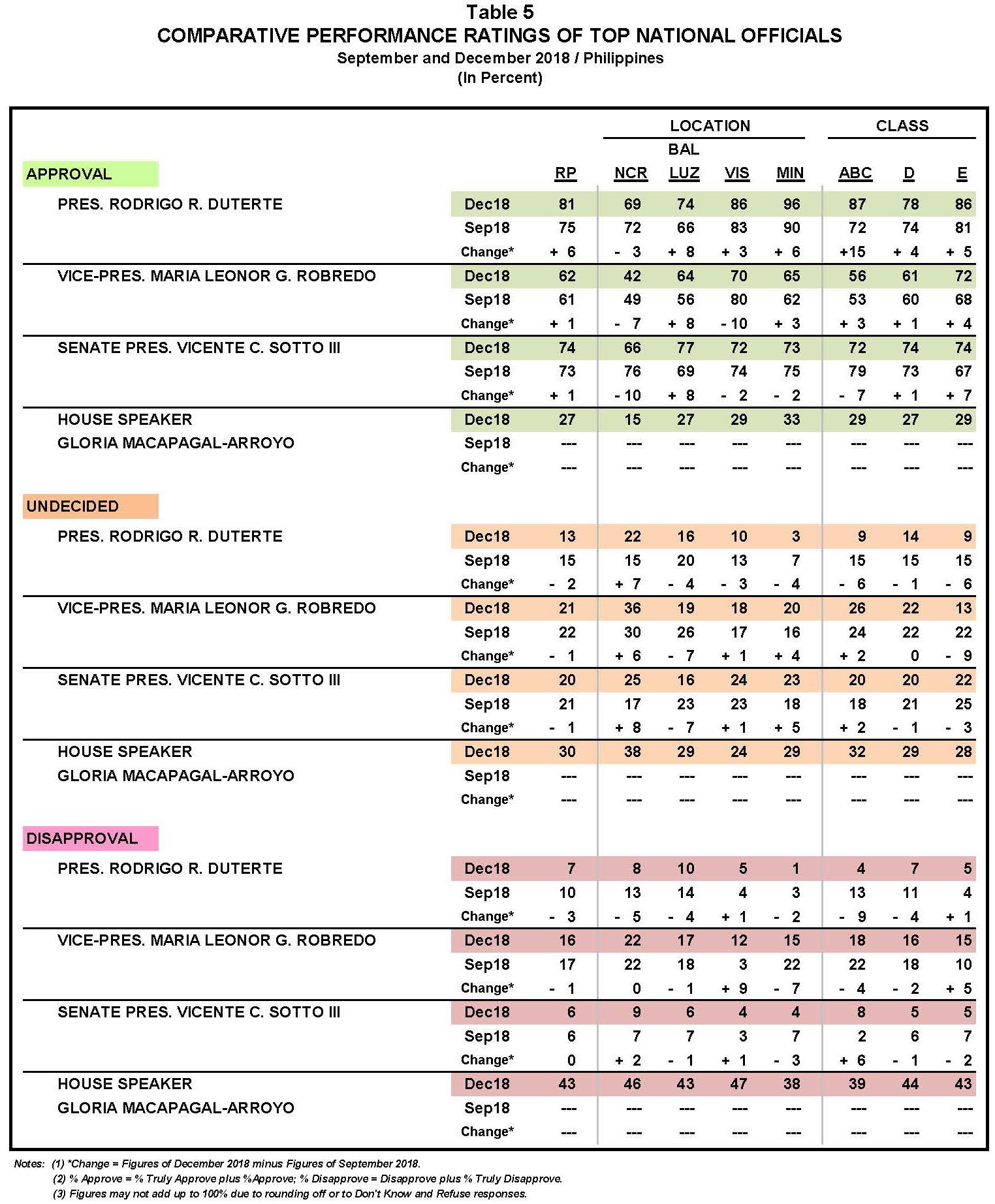 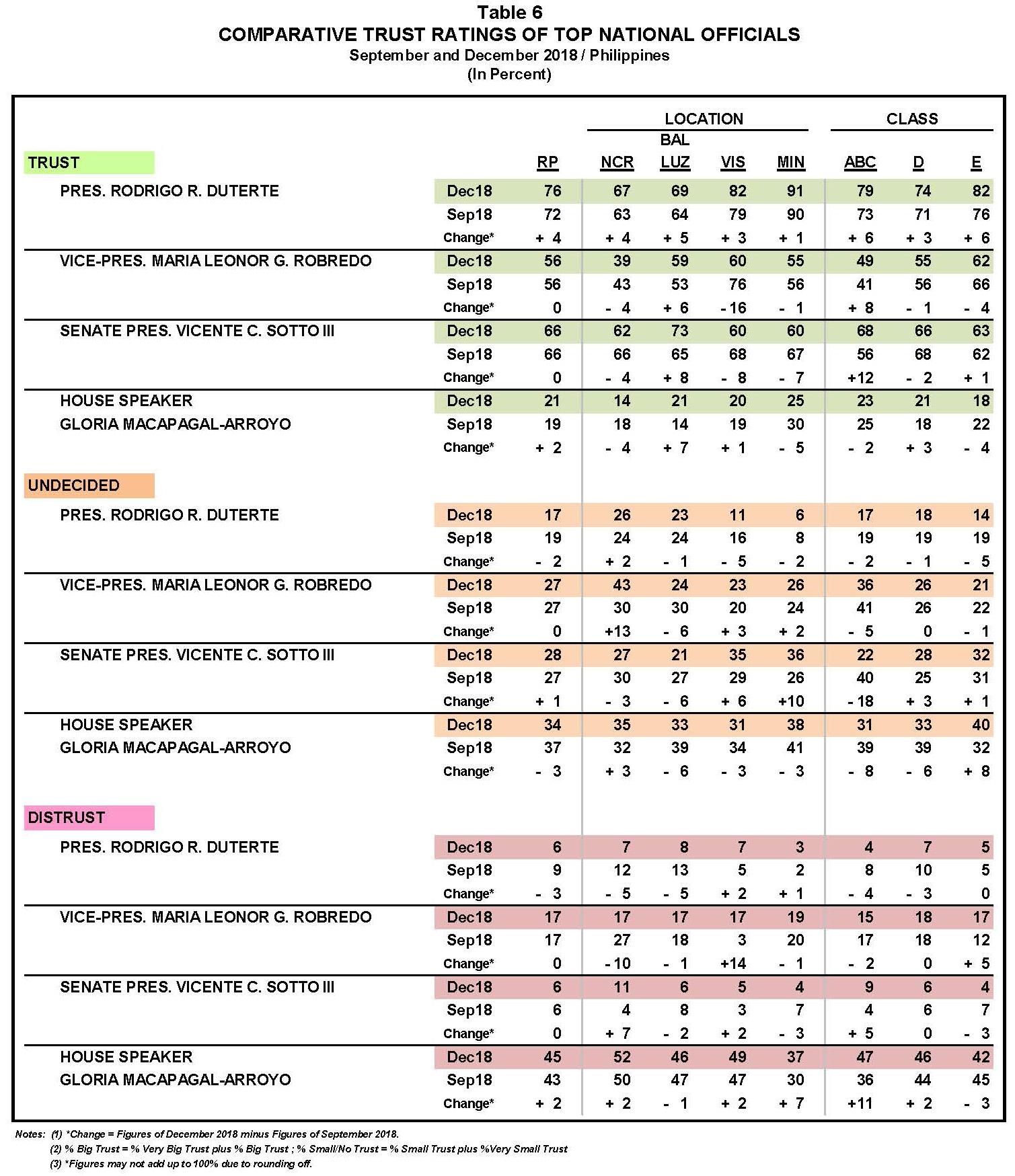 Approval and trust are the majority sentiments toward Congress and the Supreme Court; significant movements in the performance and trust ratings of these government institutions are recorded between September and December 2018 and during the period June to December 2018, respectively 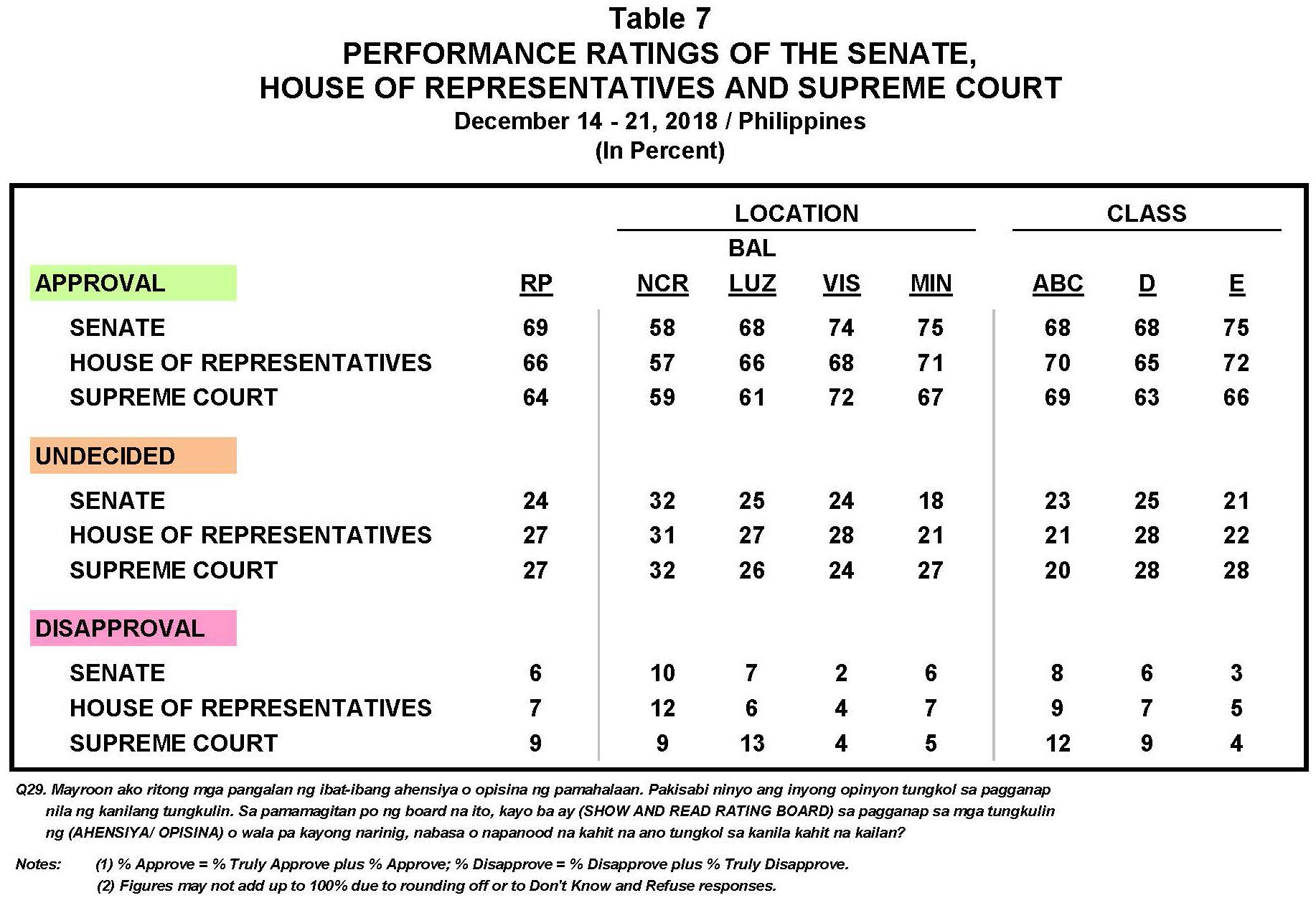 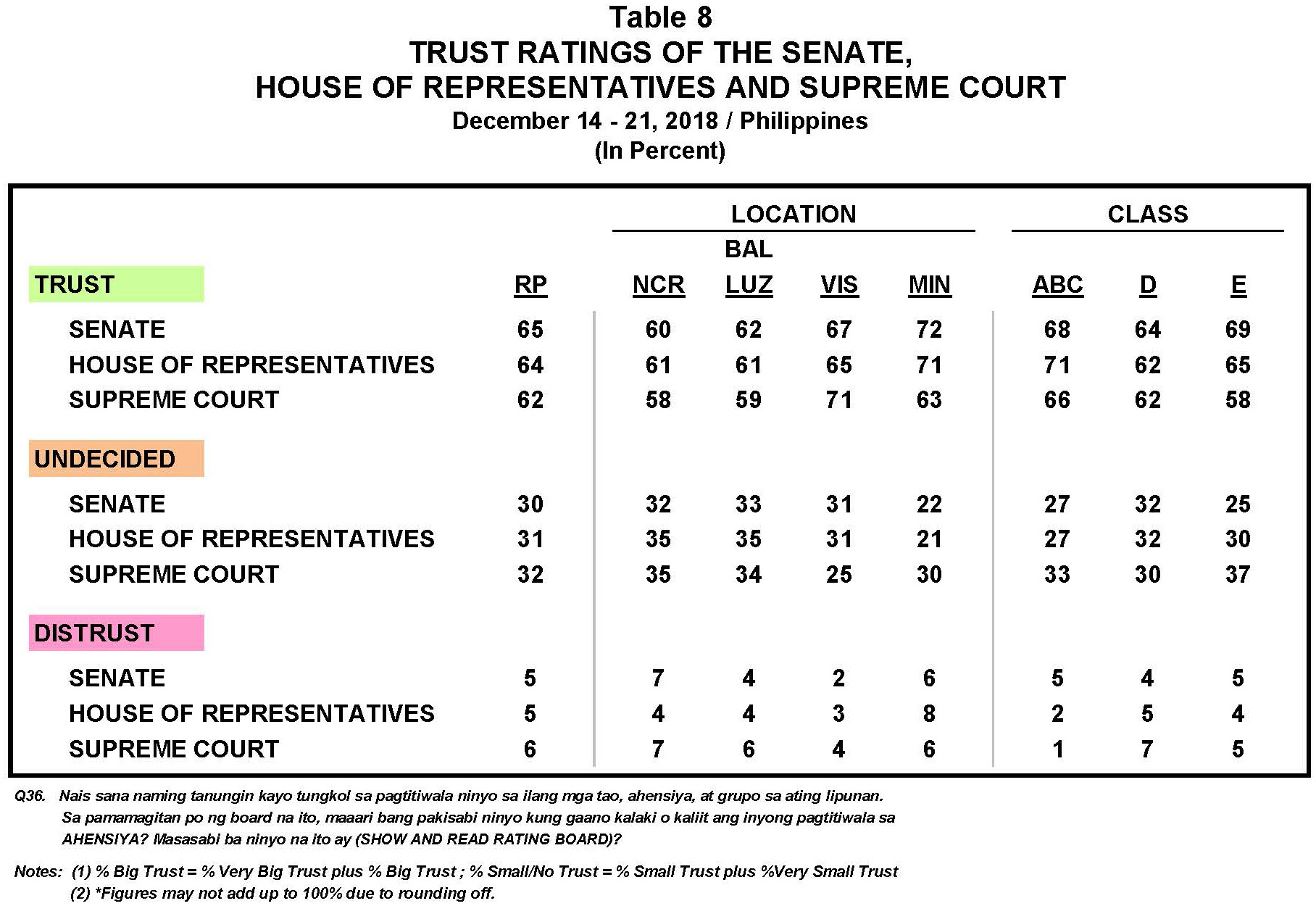 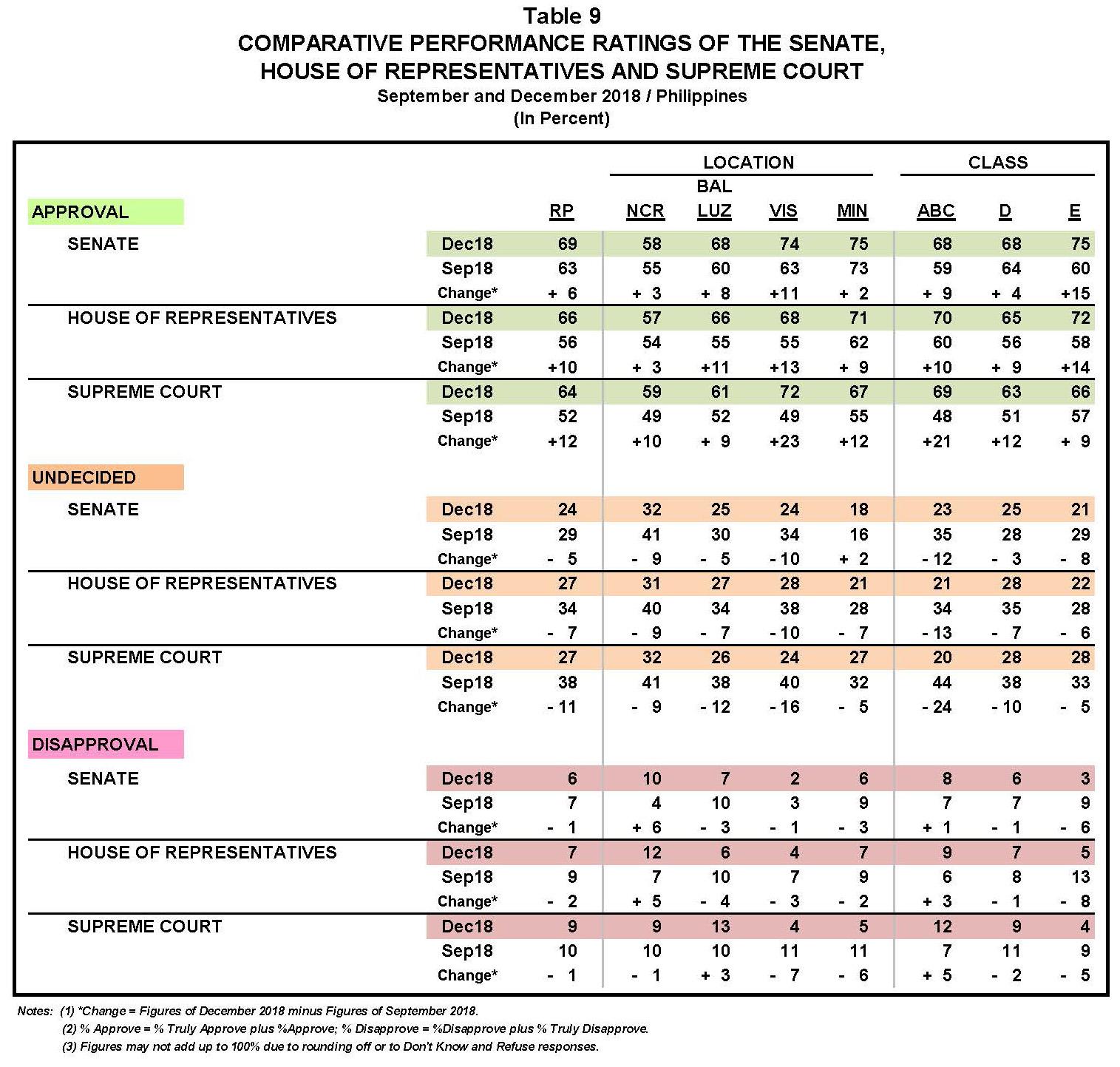 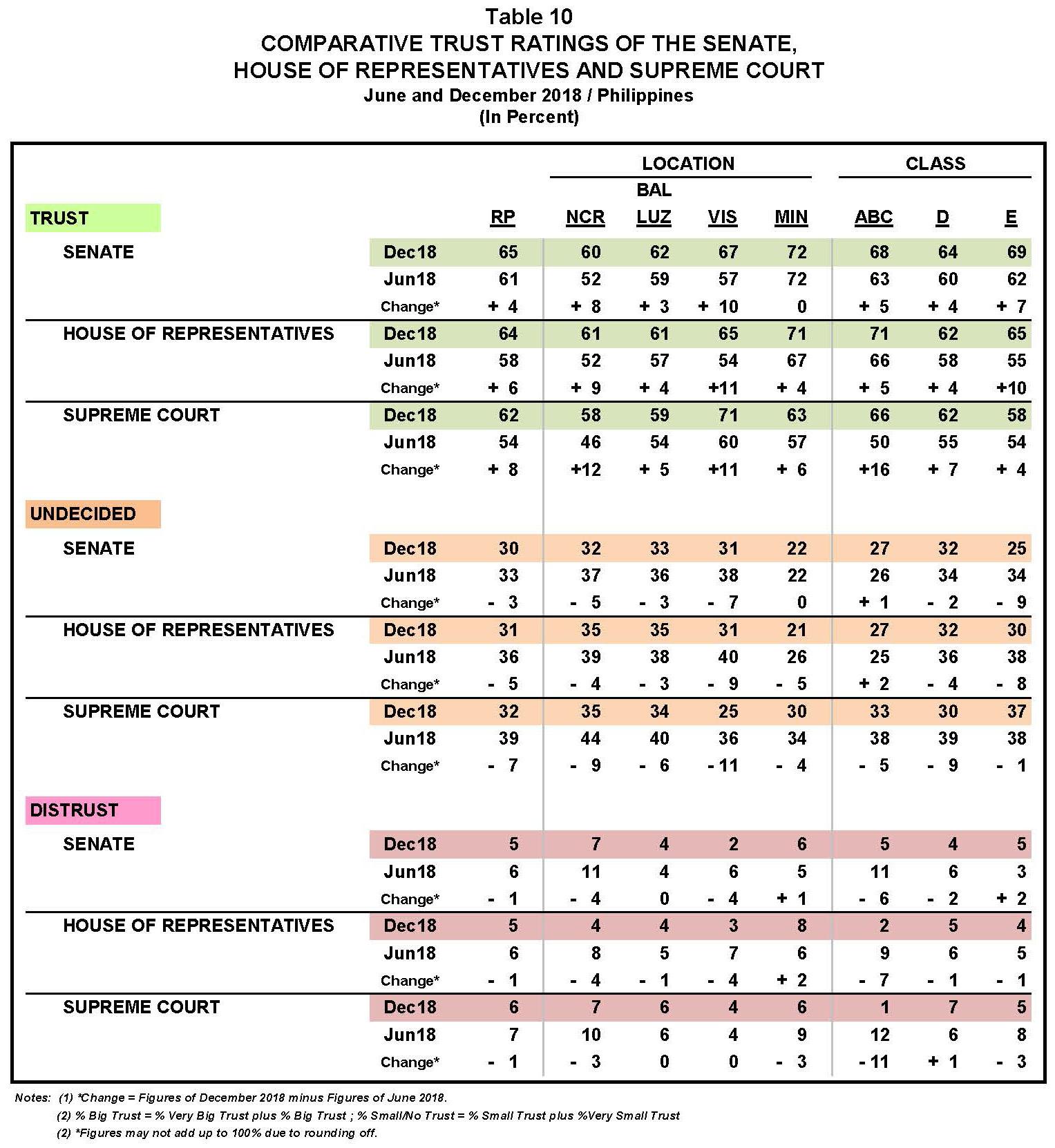