Pulse Asia Research, Inc. is pleased to share with you some findings on Public Trust in Selected Countries and International Organizations from the December 2016 Ulat ng Bayan national survey. We request you to assist us in informing the public by disseminating this information.

Trust is the majority sentiment toward the United States (76%) and Japan (70%) as well as the United Nations (74%); most Filipinos distrust China (61%), Russia (58%), and Great Britain (55%) while around the same percentage of Filipinos  either trust or distrust the European Union (50% versus 47%)

In December 2016, high majority trust ratings are obtained by the United States (76%) and Japan (70%). Trust[1] in both countries is the prevailing sentiment in every geographic area (69% to 83% and 58% to 76%, respectively) and socio-economic class (74% to 82% and 62% to 83%, respectively). Distrust[2] in the United States and Japan is expressed by 23% and 29% of Filipinos, respectively. Only 1% of Filipinos are either ambivalent on the matter[3] or refuse to state an opinion about the trustworthiness of these countries. (Please refer to Tables 1 and 2.)

On the other hand, more than half of Filipinos distrust Great Britain (55%), Russia (58%), and China (61%). Majorities in most geographic areas (53% to 68%) and all socio-economic groupings (52% to 62%) distrust Great Britain while the majority sentiment in Metro Manila is one of trust (55%). For its part, Russia registers majority distrust scores in the rest of Luzon (61%) and the Visayas (69%) as well as in every socio-economic class (56% to 65%) but it has virtually the same trust and distrust figures in Metro Manila (46% versus 50%) and Mindanao (50% versus 46%). In the case of China, it obtains majority distrust figures in almost all geographic areas and socio-economic groupings (60% to 67% and 60% to 70%, respectively), with Mindanao and Class ABC being the exceptions. In both subgroupings, China records essentially the same trust and distrust ratings (47% versus 50% and 48% versus 49%, respectively).

Meanwhile, the United Nations (UN) enjoys majority trust ratings not only at the national level (74%) but also across geographic areas and socio-economic classes (67% to 83% and 69% to 79%, respectively). A quarter of Filipinos (25%) distrust the organization while only 1% of Filipinos are undecided as regards the trustworthiness of the UN or refuse to express an opinion on the matter.  With respect to the European Union (EU), while 50% of Filipinos trust the organization, 47% do not. Indecision on the matter is expressed by 3% of Filipinos. Majorities in Metro Manila (60%), the rest of Luzon (51%), and Classes ABC and D (58% and 52%, respectively) trust the EU but most of those in the Visayas (56%), Mindanao (51%), and Class E (58%) are inclined to distrust the organization. 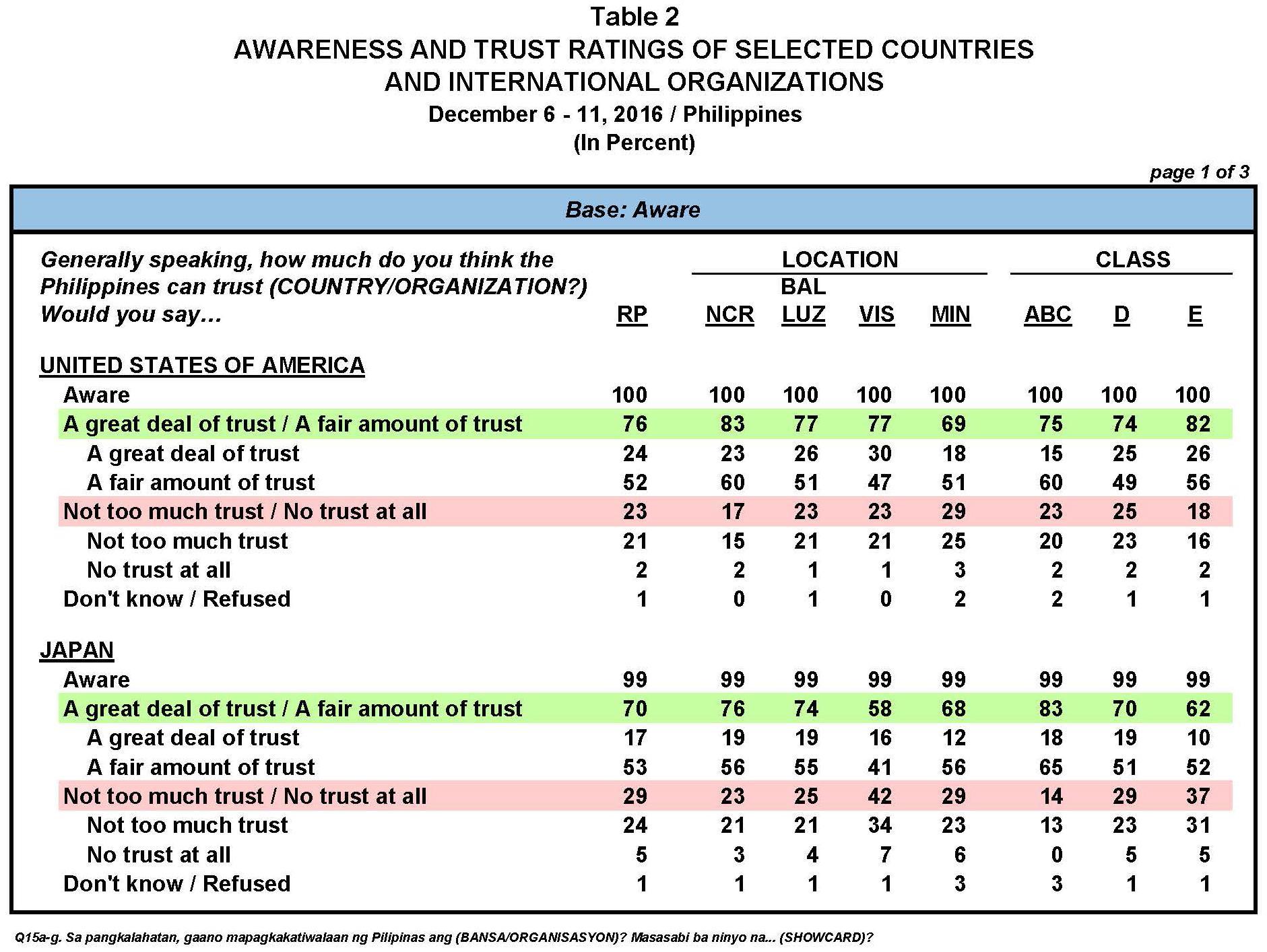 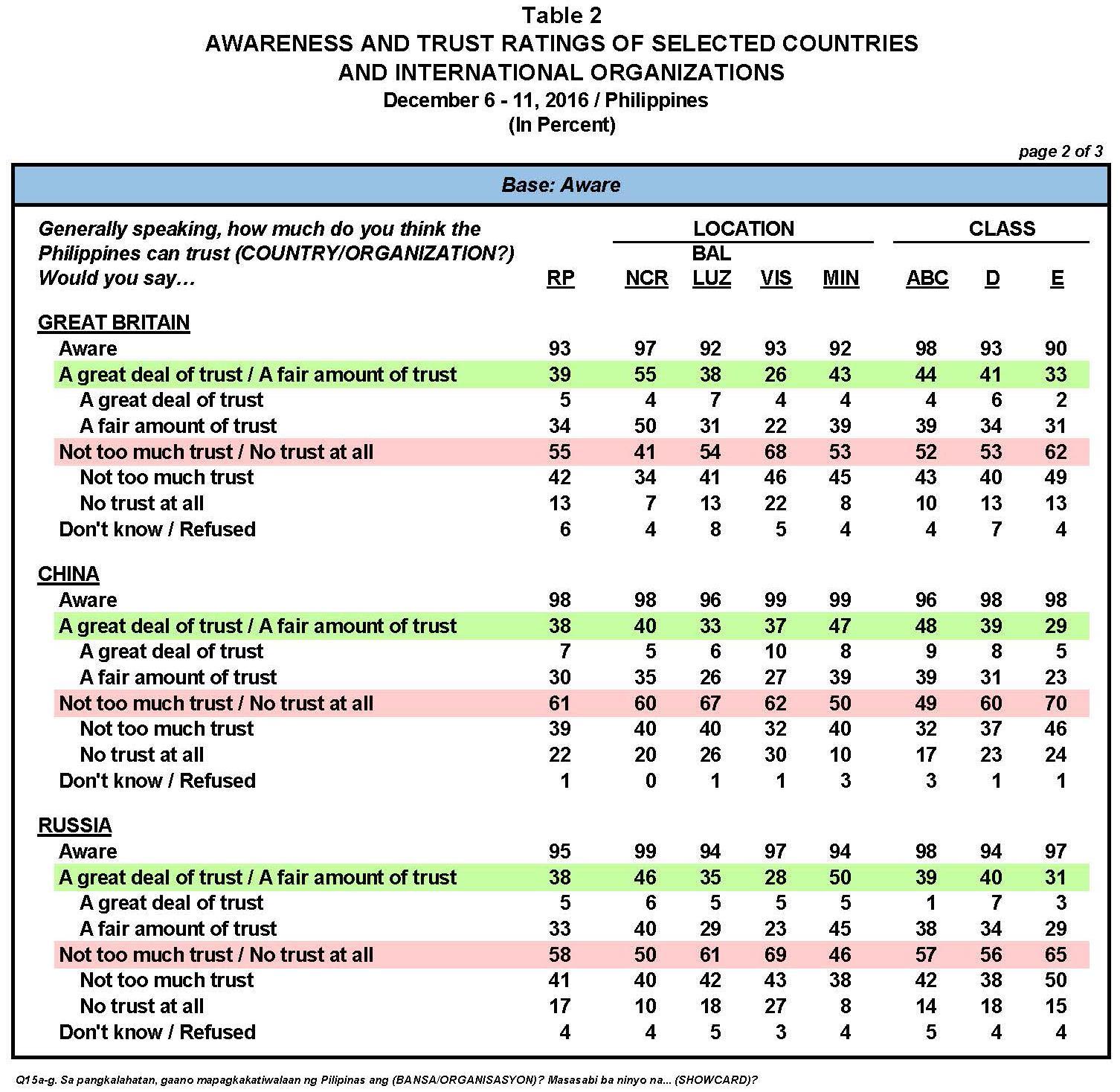 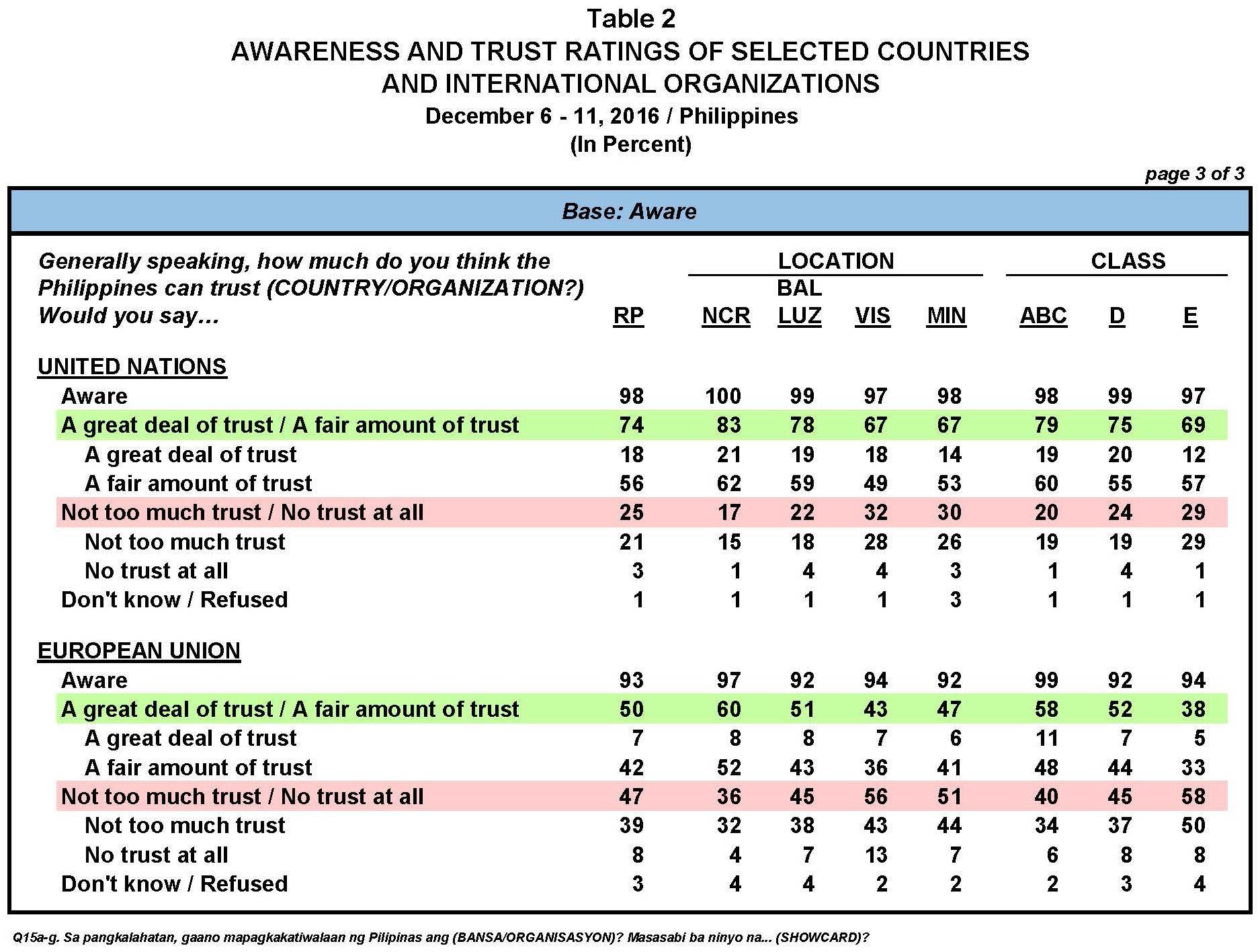 [1] This category includes those who have a great deal or a fair amount of trust in the countries and international organizations which are trust-rated in this survey.

[2] This category includes those who say they do not have much trust in these entities as well as those who do not trust them at all.

[3] This category includes those who are unable to state an opinion about the trustworthiness of these countries and international organizations, whether in terms of trust, indecision, or distrust.