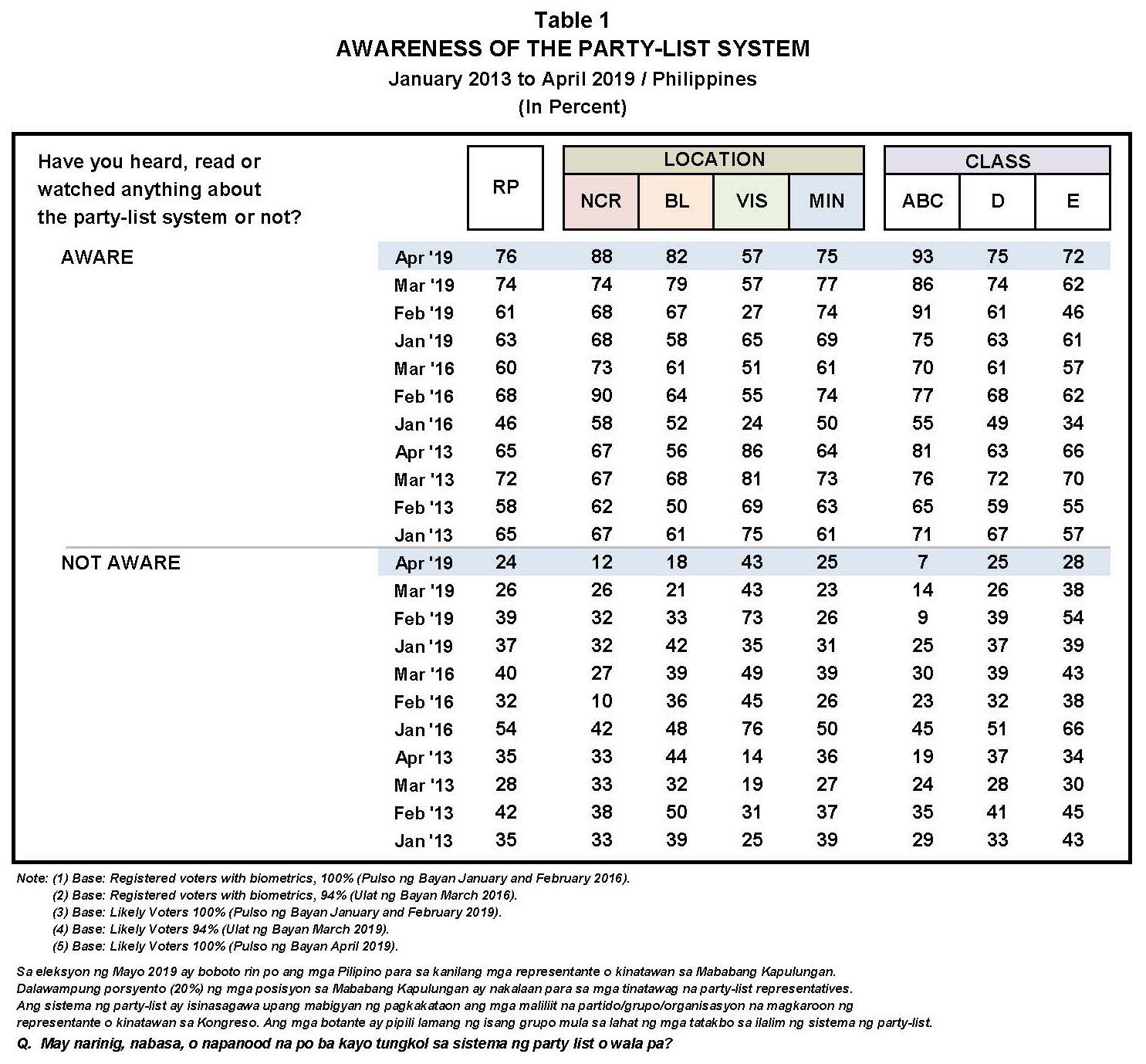 Pulse Asia Research, Inc. is pleased to share with you some findings on the May 2019 for Party-List Representatives April 2019 Pulso ng Bayan Pre-Electoral national survey. We request you to assist us in informing the public by disseminating this information.

The survey fieldwork was conducted from April 10 – 14, 2019 using face-to-face interviews. In the weeks leading up to the fieldwork for this survey and during the actual conduct of the interviews, the following local and international developments dominated the headlines:

In the weeks leading up to the survey period, the following developments preoccupied Filipinos:

1. The killing of 14 farmers in Negros Oriental on 30 March 2019 who, according to the Philippine National Police (PNP), were suspected members of the Special Bipartisan Unit of the New People’s Army (NPA) who resisted arrest during the serving of search warrants for illegal possession of firearms and explosives; a fact-finding investigation conducted by 21 human rights and farmers’ organizations concluded that the farmers were “summarily executed” and fabricated evidence were planted in their homes; Malacañang said the families of the victims should file charges against the police officers involved in the operations;

2. The continuing tension in the West Philippine Sea between the Philippines and China, with the former issuing a public rebuke of the presence of Chinese fishing vessels near territories occupied by the Philippines in the area; the Department of Foreign Affairs (DFA) said such presence is illegal as it violates Philippine sovereignty and called on the Chinese government to abide by the agreement between President Rodrigo R. Duterte and Chinese President Xi Jinping for their countries to exercise self-restraint in relation to activities in the disputed areas; the President also stated that he would not allow the Chinese to occupy Pag-asa Island even though the Philippines and China have friendly ties;

3. The start of the one-month period for overseas absentee voting (OAV) on 13 April 2019, with 1.8 million Filipino registered voters who are working or living abroad expected to cast their ballots; most overseas registered voters are based in Saudi Arabia, the United States (US), and Hong Kong;

4. The rotational brownouts that hit certain areas in Luzon in the days before Holy Week; earlier, Bayan Muna Chairperson Neri Colmenares and Senator Sherwin Gatchalian called for an investigation of the simultaneous shutdowns involving five (5) power plants in Luzon because these could be done on purpose to create an artificial power shortage to justify a hike in electricity rates; the Manila Electric Company (Meralco) announced an increase in its overall electricity rate in April 2019 due to a higher generation charge;

5. The fact-finding probe initiated by the Supreme Court (SC) to look into the alleged inclusion of unnamed judges in the narco list of the Philippine Drug Enforcement Agency (PDEA); the PDEA has already rejected the SC’s request for the names of the judges included in the said new list because the names are still being revalidated by concerned law enforcement agencies;

6. The seizure of P 254.4 M worth of cocaine bricks from the waters off Burgos, Surigao del Norte on 07 April 2019; PDEA Director General Aaron Aquino said this and other similar incidents in Davao Oriental, Nueva Ecija, Quezon, Camarines Norte, Catanduanes, Surigao del Sur, and Dinagat and Siargao Islands since March 2019 might indicate that the Philippines is being used by international drug rings as a transshipment point for cocaine;

7. The order issued by the Supreme Court (SC) for the Solicitor General to submit the police reports on the killings of more than 4,000 individuals during police operations conducted from 01 July 2016 to 30 November 2017; the order was made in connection with a writ of amparo petition filed in 2017 by the Center for International Law (CenterLaw) and a petition questioning the constitutionality of Oplan Tokhang submitted by the Free Legal Assistance Group (FLAG);

8. The signing by President Duterte of a law dividing Palawan into three (3) separate provinces, namely, Palawan del Norte, Palawan Oriental, and Palawan del Sur; these provinces will have their own governor, vice-governor, and provincial board members who will be elected for the first time in May 2022 once the residents in the affected areas approve the creation of these provinces during a plebiscite scheduled on 11 May 2020;

9. The President’s reaction to a report by the Philippine Center for Investigative Journalism (PCIJ) concerning his family’s wealth, which he said he will explain in due time; the report looked into the increase in the incomes of President Duterte and his children, Davao City Mayor Sara Duterte-Carpio and former Davao City Vice-Mayor Paolo Duterte, while they were in office; the President added that what he and his children earn outside of government is nobody’s business;

10. President Duterte’s call for all government contracts with private entities, including foreign-based ones, to be checked and reviewed so that onerous provisions detrimental to the interest of the Filipino people can be removed; the President’s order was issued in the wake of his threat to terminate the contracts of Manila Water and Maynilad due to the water service interruptions in several areas of Metro Manila and Rizal and amidst questions raised by various sectors regarding Chinese loan deals for different infrastructure projects;

11. The threat made by President Duterte about declaring a “revolutionary war”, suspending the writ of habeas corpus, and ordering the arrest of his critics following a remark made by Senate Minority Leader Franklin Drilon cautioning the administration against not following proper procedures in its reexamination of existing government contracts with private companies; the President warned his critics that if they continue to attack him, he will declare a revolutionary war until the end of his term;

12. The estimates made by the Department of Agriculture (DA) showing that the El Niño spell has already affected 177,743 hectares of agricultural land and 164,672 farmers as of 02 April 2019; in addition, the damage to crops, mainly rice and corn, is now at P 5.05 B, with farmers in Cagayan Valley, Bicol, and Northern Mindanao being hardest hit;

13. The decision of the Office of the Solicitor General (OSG) not to authorize the settlement that would have allowed the distribution of US$ 13.75 M, raised from the sale of four (4) paintings illegally obtained by former First Lady Imelda Marcos, to 6,500 registered claimants in a class action suit against the Marcos estate; several groups of martial law victims condemned the OSG’s move and questioned the motive behind its decision to refuse the settlement deal; however, a federal judge in New York affirmed the settlement, with each of the martial law victims set to receive US$ 1,500 starting in May 2019; and

14. The denial issued by former Davao City Vice-Mayor Paolo Duterte in connection with allegations that he received payoffs from a narcotics syndicate amount to nearly P 400 M in 2018; meanwhile, to dispute reports linking him to the drug trade, former Special Assistant to the President (SAP) Christopher Go took off his shirt during a press conference in Agusan del Sur on 10 April 2019 to show that he did not have a tattoo, the presence of which would supposedly prove his ties to narcotics syndicates; Malacañang dismissed the report as “black propaganda” aimed at the President, his family, and close associates.

Based on a multistage probability sample of 1,800 likely voters 18 years old and above, Pulse Asia’s nationwide survey has a +/- 2.3% error margin at the 95% confidence level. Subnational estimates for the geographic areas covered in the survey have the following error margins at 95% confidence level: +/- 6.8% for Metro Manila, +/-3.5% for the rest of Luzon, +/-5.1% for Visayas and +/-4.8% for Mindanao. Those interested in further technical details may refer to our website (www.pulseasia.ph)

Pulse Asia Research’s pool of academic fellows takes full responsibility for the design and conduct of the survey, as well as for analyses it makes based on the survey data. In keeping with our academic nature, no religious, political, economic, or partisan group influenced any of these processes. Pulse Asia Research undertakes Pulso ng Bayan pre-election surveys on its own without any party singularly commissioning the research effort.

Awareness of the party-list system is reported by most Filipinos (76%); 13 party-list groups are able to surpass the 2.0% voter preference threshold

In April 2019, about three-fourths (76%) of Filipino registered voters who are likely to vote in the May 2019 elections have heard, read, or watched something about the party-list system. Levels of awareness range from 57% to 88% across geographic areas and from 72% to 93% in the different socio-economic classes. Higher awareness levels are recorded in Metro Manila and the rest of Luzon than the Visayas (82% to 88% versus 57%) and in the best-off socio-economic class than the poorer ones (93% in Class ABC versus 72% to 75% in Classes D and E). Between March 2019 and April 2019, awareness figures remain essentially constant at the national level and across geographic areas and socio-economic groupings, with the only notable change being the increase in awareness level among Metro Manilans (+14 percentage points). (Please refer to Table 1.)

Out of the 134 party-list groups that have been accredited by the Commission on Elections (COMELEC), 13 would garner more than 2.0% of the total votes cast for the party-list elections if the May 2019 elections were held during the survey period. This means that each of these 13 party-list groups would get one (1) seat in the House of Representatives in the first round of seat allocation described by the Supreme Court in its resolution dated 17 February 2017.  These parties are Bayan Muna (7.94%), Ako Bicol Political Party (6.65%), Magsasaka (5.32%), Anti-Crime and Terrorism Community Involvement and Support, Inc. (4.67%), Association of Philippine Electric Cooperatives (4.11%), Agricultural Sector Alliance of the Philippines (3.55%), Citizens’ Battle Against Corruption (3.12%), Coalition of Association of Senior Citizens in the Philippines, Inc. (2.92%), Anak Mindanao (2.83%), Probinsyano Ako (2.64%), Ang National Coalition of Indigenous Peoples Action Na! Inc. (2.44%), Alyansa ng mga Mamamayang Probinsiyano (2.24%), and Cooperative NATCCP Network (2.07%). (Please refer to Table 2.)

Furthermore, following the procedure for allocating the maximum number of 59 seats for party-list representatives described in the said resolution, four (4) party-list groups each obtain three (3) seats in the Lower House, the maximum number of seats that any group can win in the party-list elections. These groups are Bayan Muna, Ako Bicol Political Party (Ako Bicol), Magkakasama sa Sakahan (Magsasaka), and Anti-Crime and Terrorism Community Involvement and Support, Inc. (ACT-CIS). 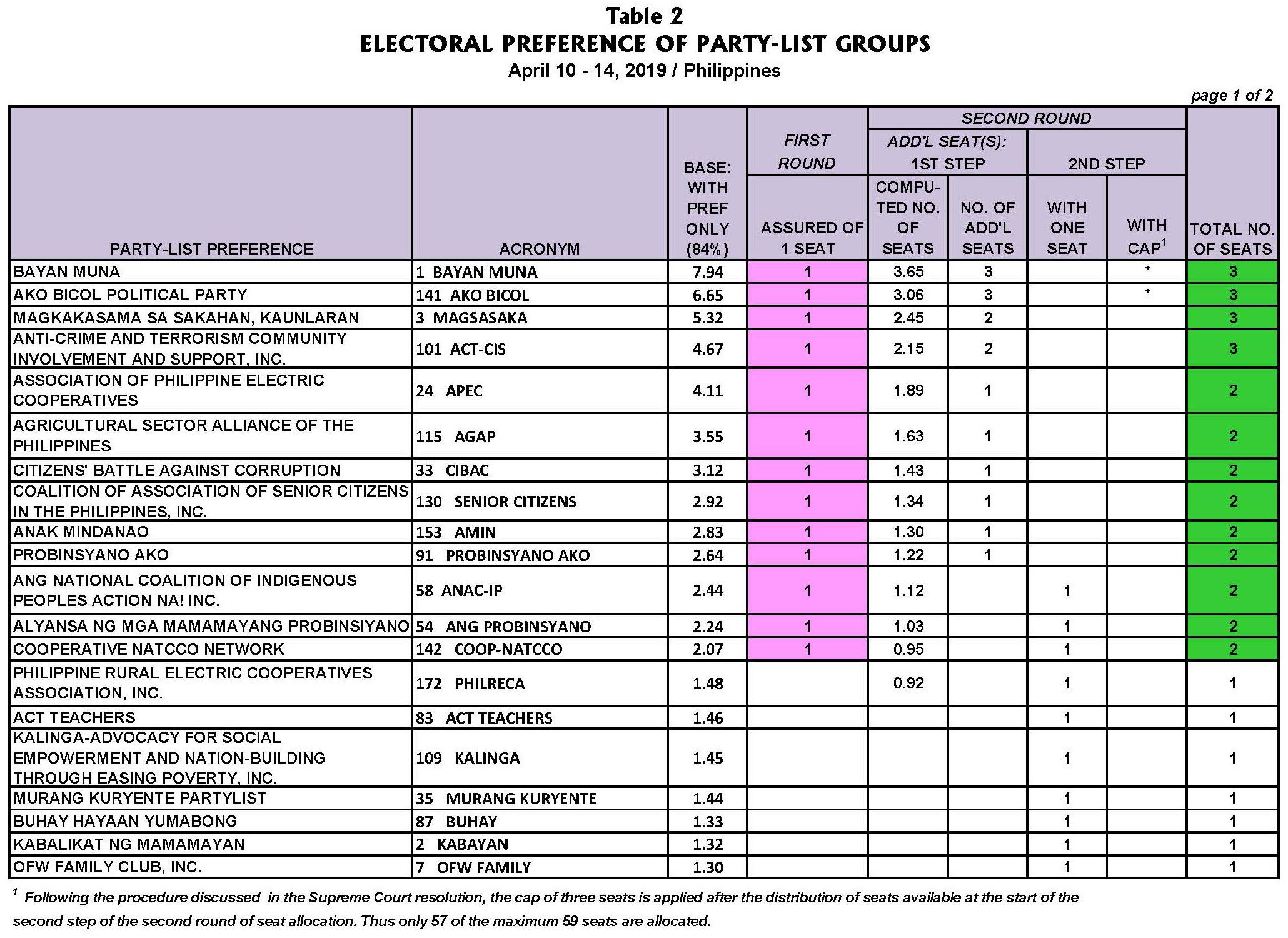 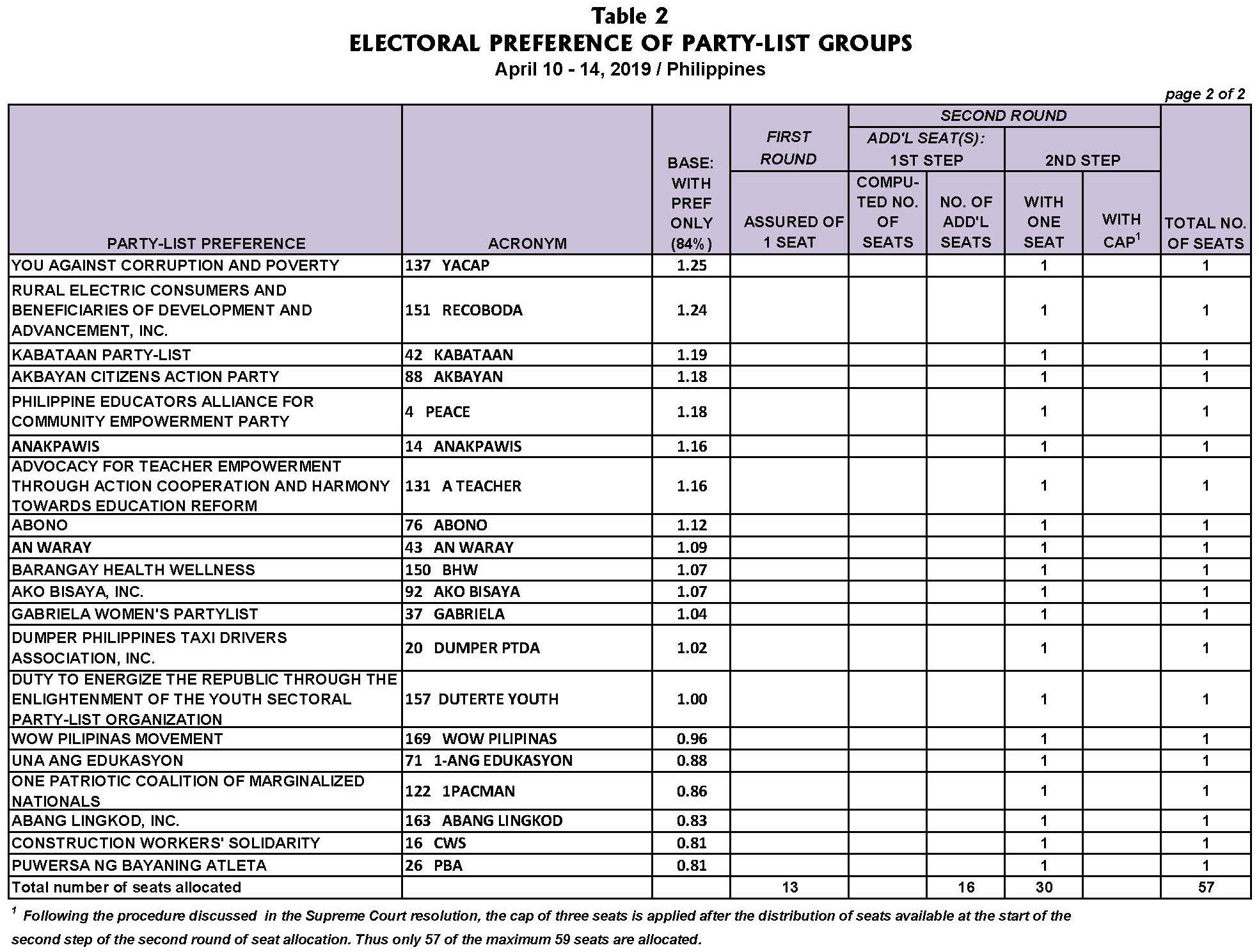 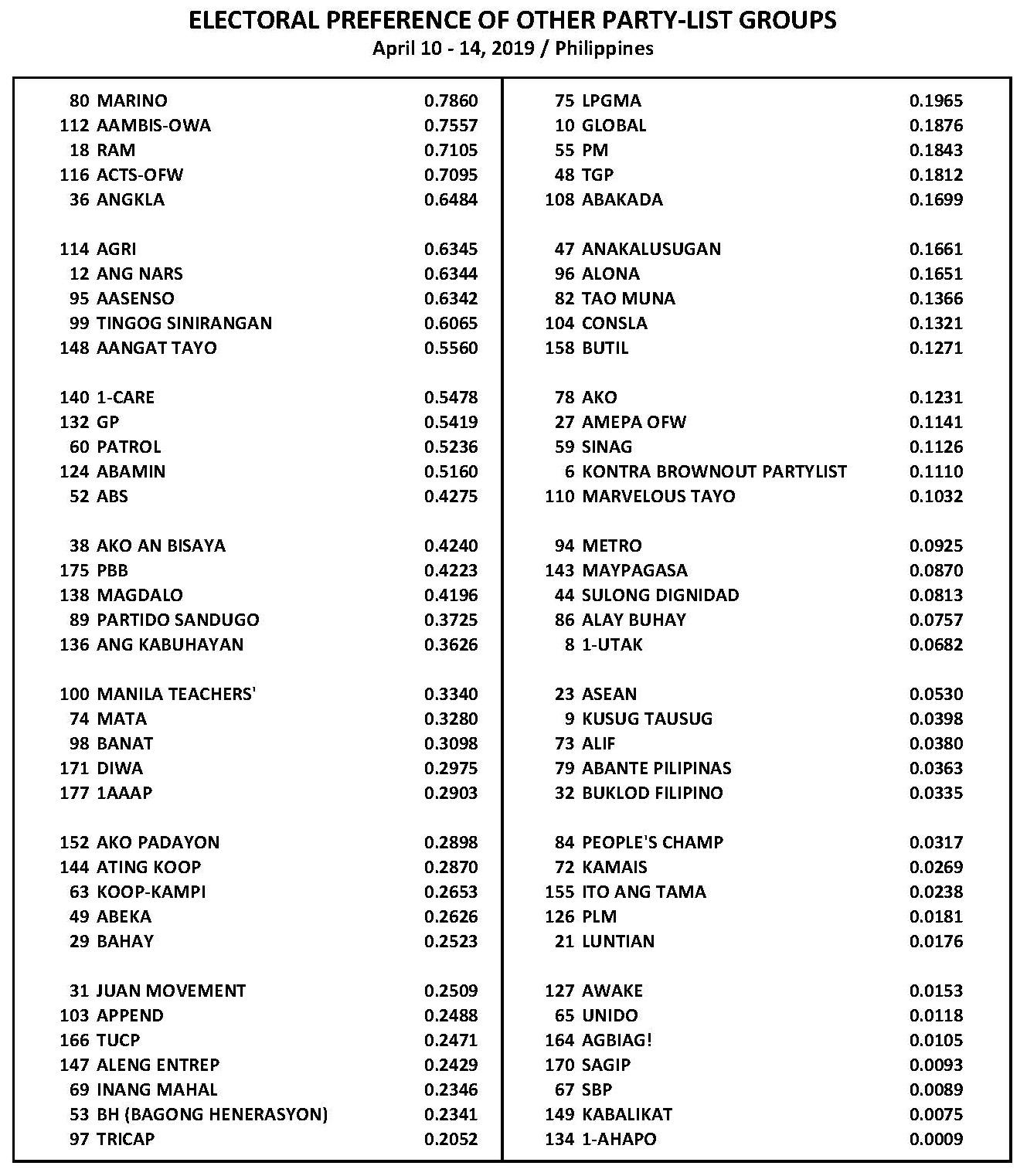